What to See and Do at Easter in Rome 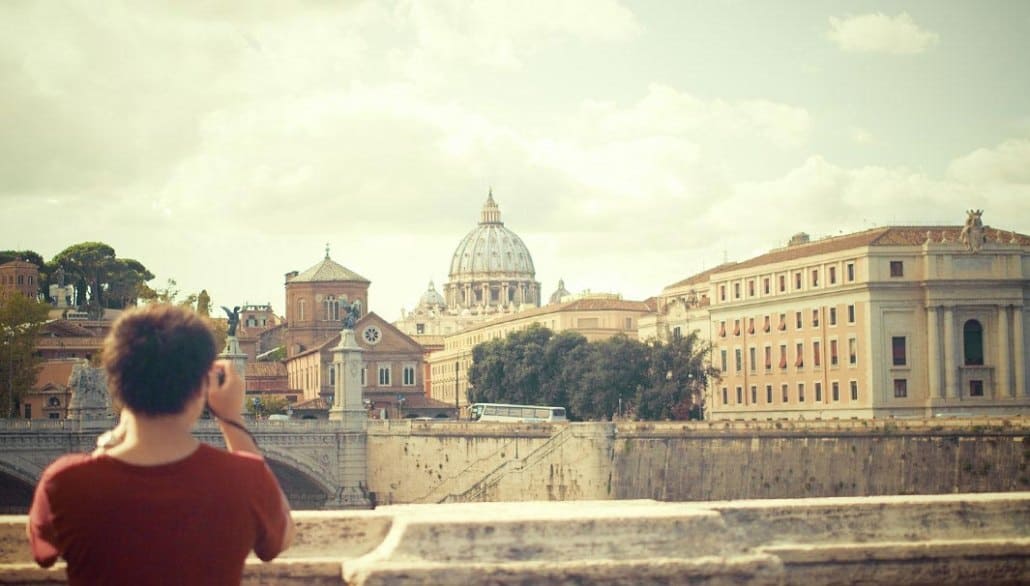 What better place to spend Easter than in Rome, or even the Vatican itself! If you’re planning on spending your Easter holiday in the Eternal City, you’re in for a real treat. There are literally tons of special events scheduled throughout the city in celebration of Easter and Holy Week, many of which allow visitors a chance to see Pope Francis himself!

Not only is this a great time to see the Catholic Church in full swing, but Rome’s historic and cultural landmarks stay open for tourists throughout most of the holiday hustle and bustle, so you don’t risk missing a thing. Basically, Easter-time travellers can take part in once-in-a-lifetime religious ceremonies while, on the same weekend, crossing unmissable attractions, like the Colosseum and Roman Forum, off their bucket lists!

Ash Wednesday (March 6th this year) kicks off a 40-day fast, a period called “Lent” in which believers reflect intensely on Christ’s 40 days in the wilderness. This is essentially the starting point of the Easter holiday season. Pope Francis begins the day by addressing a Papal Audience in St. Peter’s Square in the morning. 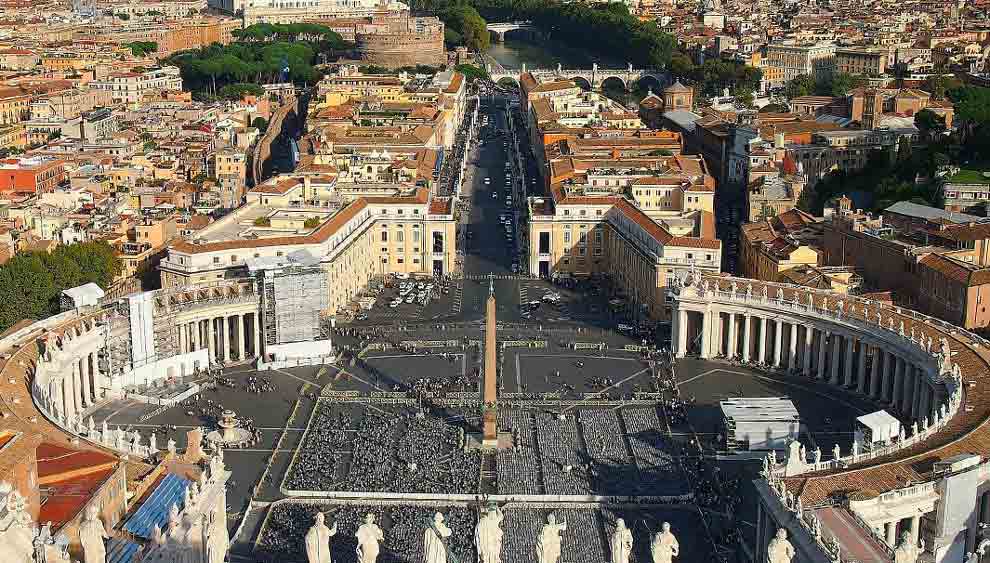 Fortunately, St. Peter’s Square has the capacity to hold more than 300,000 visitors at a time, so everyone can celebrate together

On Palm Sunday, which commemorates Christ’s triumphal entrance to Jerusalem just a week before his resurrection, thousands flock to St. Peter’s Square to witness the Blessing of the Palms and Holy Mass. The event, which starts at 9:30 am, is free, but you will need a ticket to attend. Even with a ticket, it is recommended to arrive early for the event – that is if you want to get a good spot to really experience the event.

On Holy Thursday, also known as Maundy Thursday, the Pope hosts a rare mass in St. Peter’s Basilica at 9:30 am. This is a great chance to have a relatively more intimate experience with Pope Francis since the crowds are usually ten times larger on Easter Sunday. On Thursday evening, there will be a second Papal Mass, the Mass of the Lord’s Supper, which is held in Basilica of St. John Lateran at 5:30 pm to commemorate Christ’s bathing of the Apostle’s feet.

In recent years, Pope Francis has washed the feet of several refugees, including Muslims, Hindus, and Copts. Pope Francis has said that washing people’s feet is a gesture that “speaks louder than words.” As he is a man with immense power and faith, it’s humbling to see him perform such a symbolic gesture. 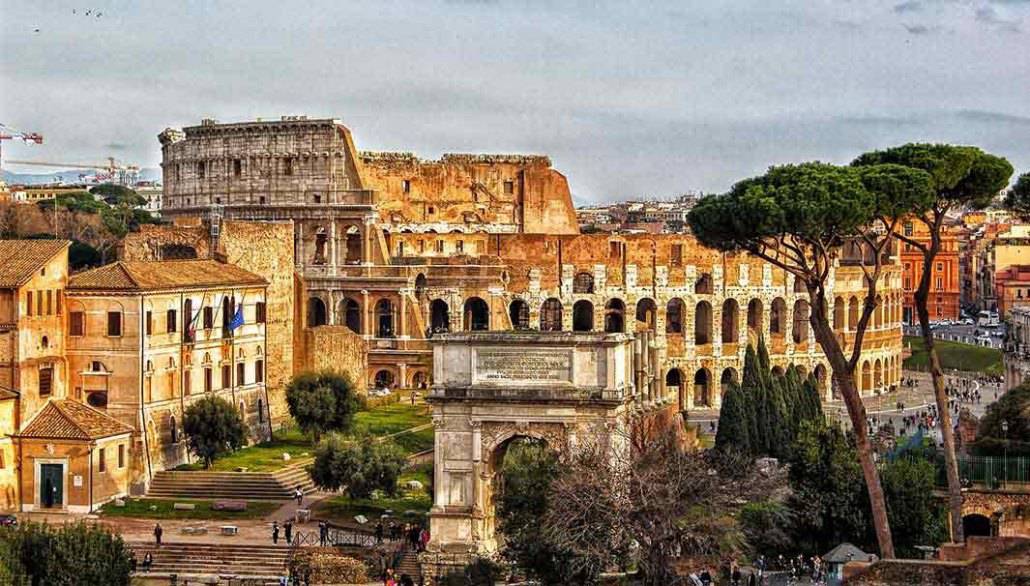 For the Via Crucis procession, the Pope leads faithful followers from the Colosseum to the Temple of Venus carrying a cross

Good Friday begins with a Mass led by Pope Francis in St. Peter’s Basilica at 5 pm and then continues with what is known as the Via Crucis, or “Stations of the Cross,” which is a candlelit procession led by the Pope beginning at 9:15 pm at the Colosseum and ending a short distance away at the Temple of Venus in the Roman Forum.

The Via Crucis procession is replicated throughout every town, however small or large, in Italy, but the biggest showstopper is, of course, in the Eternal City itself. The procession depicts the final moments of the Passion of Christ leading to the Crucifixion through 14 different stations, each telling a part of the story of Christ’s journey to the cross. The backdrop that the Roman Forum provides, with Rome’s unique umbrella pine trees and ancient ruins makes this an event not to be missed. Thousands of pilgrims, onlookers and Roman’s flee to this event year after year.

The main highlight of Easter Saturday is the Easter Vigil, led by Pope Francis, inside of St. Peter’s Basilica. Tickets to the 8:30 pm Mass are free, but they are also very popular – so book as far in advance as possible! 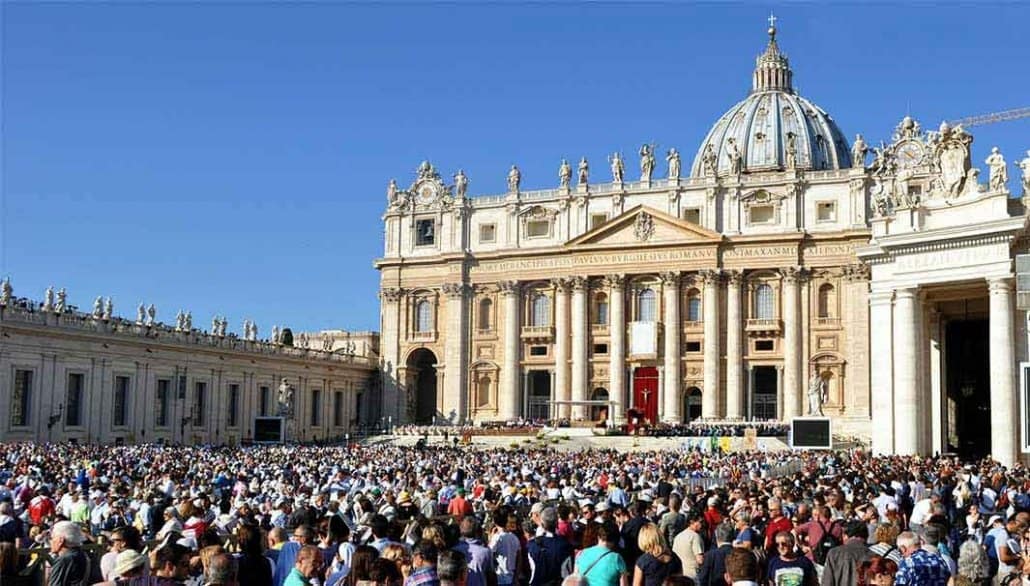 A sunny day sometimes blesses St. Peter’s Square for Easter Mass and since Easter comes late this year the odds are good

Easter Sunday is certainly the apex of Holy Week! Visitors are always hopeful for a sunny day during a sometimes rainy season, but even if it isn’t, pilgrims, Italians and tourists alike flock to St. Peter’s Square. The morning starts at 10:15 with Easter Mass in front of St. Peter’s Basilica. You will need a ticket to attend the mass and, even with a ticket, you should plan to arrive early to be allowed in and to get a decent seat.

After Easter Mass, at 12 pm, Pope Francis makes his annual address to the crowd, the “Urbi et Orbi” speech, which translates to “to the city and to the world”. This address happens only twice a year, for Easter and Christmas. Unlike the mass, you do not need a ticket to watch the Urbi et Orbi.

At 12 pm, Easter Monday’s Papal Mass is led by Pope Francis at St. Peter’s Basilica. No tickets are required, so this is a great option even for those who were unable to plan things in advance.

Italians know how to celebrate and in Italy, Easter Monday, or “La Pasquetta” (which literally translates to “Little Easter”) is a national holiday. It’s a time to spend with friends and family, usually in an outdoor setting if the weather permits it, enjoying a picnic to contrast the solemn and reflective past 40 days of Lent. Many folks even take to the beach on this day, as many shops and businesses are closed.

Regardless of how they choose to spend it, Easter Monday is celebrated as a day of rest and relaxation by spending time in nature, having an outdoor lunch, most likely making use of Easter leftovers and spending time with friends and family. 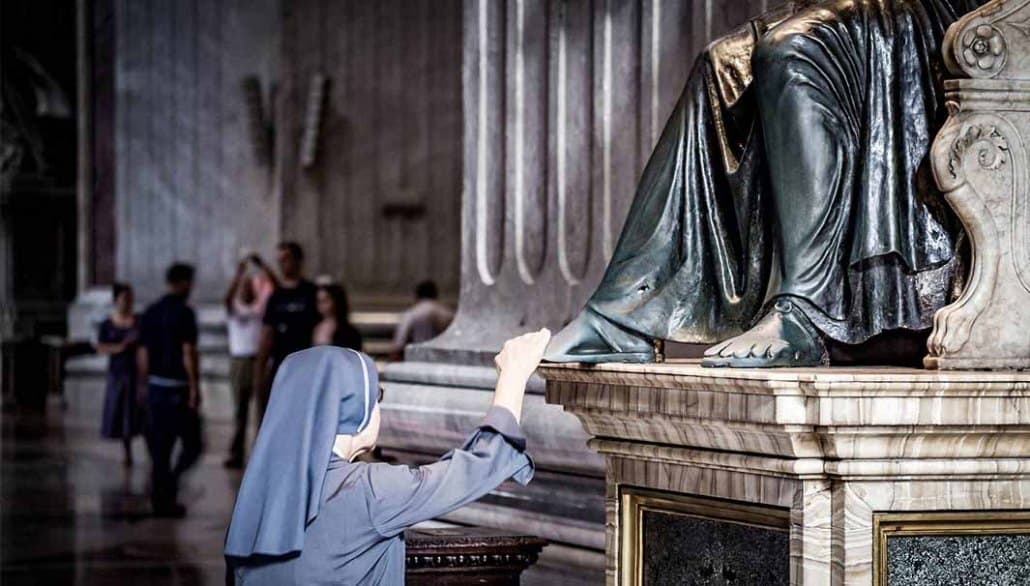 Opening hours at St. Peter’s Basilica can be a little sporadic during Holy Week

St. Peter’s Basilica closes frequently during the Easter holidays in order to accommodate for Papal Masses. The following are the days/times that the masses will be held. There is no schedule indicating the time at which the church will re-open to the public for visits, but they say doors will re-open when the crowds clear out after mass.

How to Get Tickets to Religious Ceremonies

Is Everything in Rome Closed for Easter?

No, not really. While many shops, businesses and banks are closed for Easter Sunday and Easter Monday, the main monuments and tourist destinations maintain near-normal business hours. For example, the Colosseum keeps normal business hours, apart from closing early on Good Friday in preparation for the Via Crucis procession.

Lots of restaurants stay open on Easter Sunday specifically to accommodate large lunch and dinner parties. You can certainly find a good place to get traditional Italian faire but reserving a table in advance is highly recommended for these holidays.

There are plenty of options available that are not even Easter related. For example, the Borghese Gallery is open on Easter Sunday (advanced booking required), along with the lesser-known Doria Pamphilj Gallery. April also presents a nice, mild climate that is perfect for exploring Rome’s parks or nearby beaches. 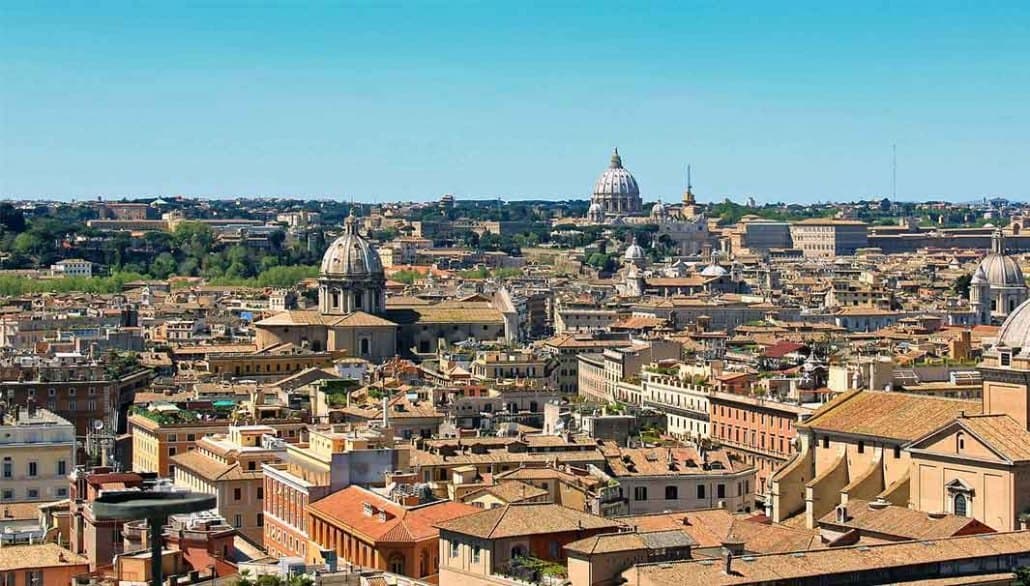 In Spring, it’s best to plan that the beautiful Roman sky may “rain on your parade” – but don’t let a little water get you down!

Let’s just say, it rains frequently in April and, statistically speaking, is likely to rain on Easter Sunday. Don’t worry, though! The celebrations and events will continue as scheduled, regardless of the forecast.

Celebrate Easter as the Romans Do

Easter Sunday marks the end of Lent and it is a time for a real feast! Traditionally, Romans organize a big family lunch, which is rarely lacking in lamb dishes and Roman artichokes. You’ll also find an abundance of “colomba”, dove-shaped cakes, in the bakeries, which are a specialty of the season. As for Easter Monday, do as the Romans by heading to the park or beach to enjoy a picnic or barbeque.

Rome Can Be Less Crowded Than You’d Expect

Considering that Vatican City is the head of the Catholic Church, it’s not an incredibly busy time to visit Rome. Sure, pilgrims and students come from around the world to take part in the festivities, but they tend to stay in special accommodations – leaving regular hotels and hostels available for tourists. As usual, you should always organize your tours and hotel bookings in advance, just to be safe on the safe side.