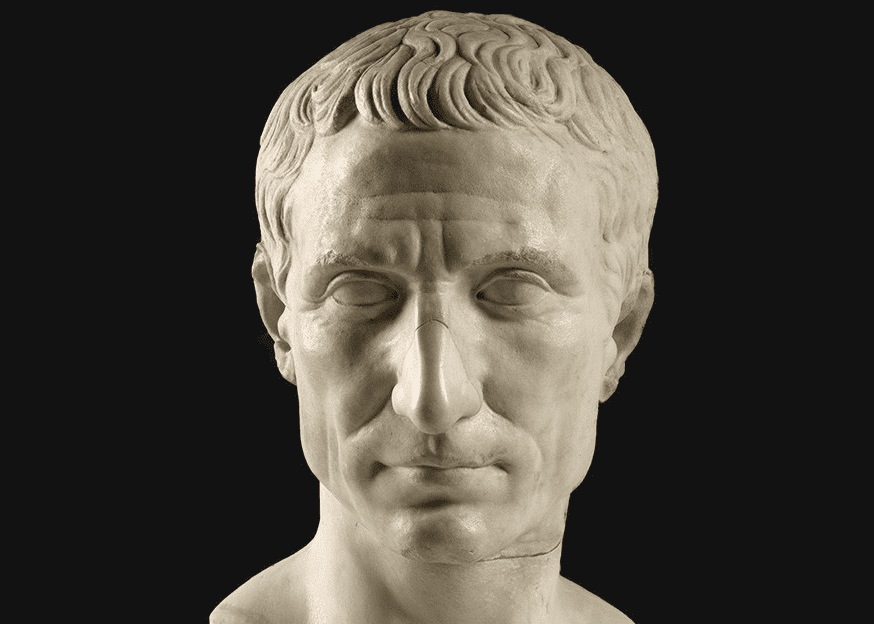 Gaius Julius Caesar. It’s curious that one of the greatest ancient Romans to have lived has quite little dedicated to him. Time didn’t help, destroying many landmarks that were connected to him, but something still remains. The most important one are the Ides of March. 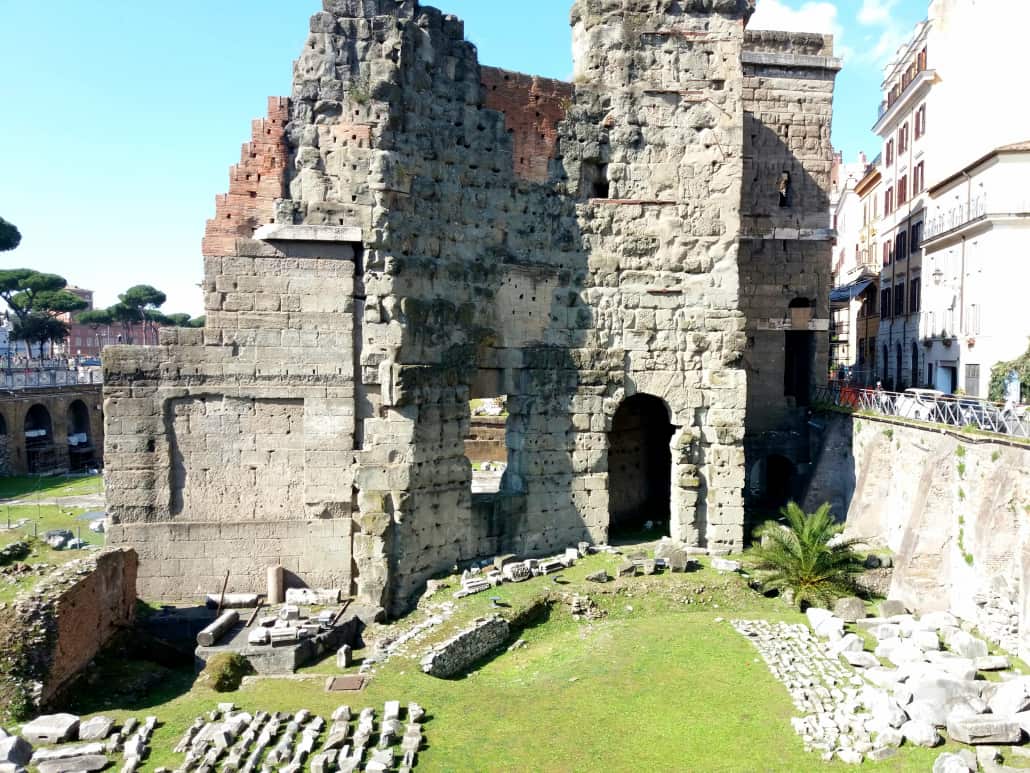 Suburra Wall – Caesar’s childhood home could have been anywhere starting to the right of the wall.

Let’s talk quickly about Caesar. Born in what today would be the 1st District of Rome, the Monti Region, specifically in the ancient Suburra. Not the best part of town because it was actually a fairly poor neighborhood. Caesar was born about year 100 BC, on the Ides of July (the 13th). His father, who died young, was a mid-ranking official, but who could claim direct descendance from Aeneas and so from Venus. That was considered a powerful weapon to use for political reasons.

His mother had equally prestigious origins. Aurelia Cotta was a descendant of the 3rd King of Rome, Anco Marzio.

Caesar brushed against the leading oligarchy, incarnated in corrupt individuals like Lucius Cornelius Sulla so, as a result, Caesar had to find a way to survive the vengeful Sulla. Once he found a way, he moved on to a long military career. A great strategist, successful campaign commander (think of the Gaul population), He also rose in political ranks, including praetor, maximum pontiff, and consulship. Member of the first Triumvirate. He was supported by the people and the military and, as a result, Caesar decided to deprive the Senate by leading his troops in, taking over power. The final rank attained was that of “dictator”, supreme military leader of the Republic.

His death: Ides of March 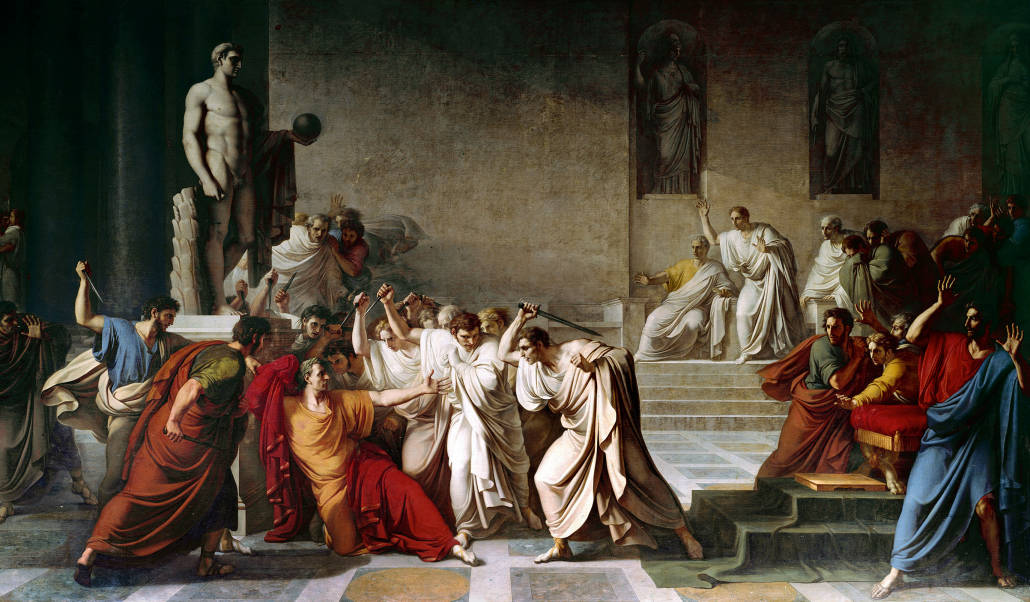 With his power also came the hate from the same people he had somehow sidelined. A group of Senators conspired to kill Caesar on the Ides of March, 44 BC. He had hearings on that day, and some decisions to make including a military campaign.

The frozen Senate, sitting there with no executive powers, had hard feelings against the dictator and, consequently, an unspecified group, 40, maybe 60 senators, wrapped around Caesar and began attacking him. Nobody will stand in his defense. The coward senators hid behind their seats, maybe some even took the exit. Caesar may have tried to react by drawing his own knife. He recognized the attackers but it was Brutus who he really spotted. A bumbling and clumsy man, he will also stab his own hand in the attack, Brutus was believed to be Caesar’s illegitimate son. He probably was and we believe that Caesar was convinced about that too and so, that’s when Caesar chose to surrender himself to the assaulters and as legend has it, 23 stabs were planted on Caesar. It is believed that only the second stab was mortal. On the Senate floor, undefended by the remaining part of the Senate, he pulled his cape on his body and slipped from life to death and from there to fame.

Sites connected to the life of Caesar: 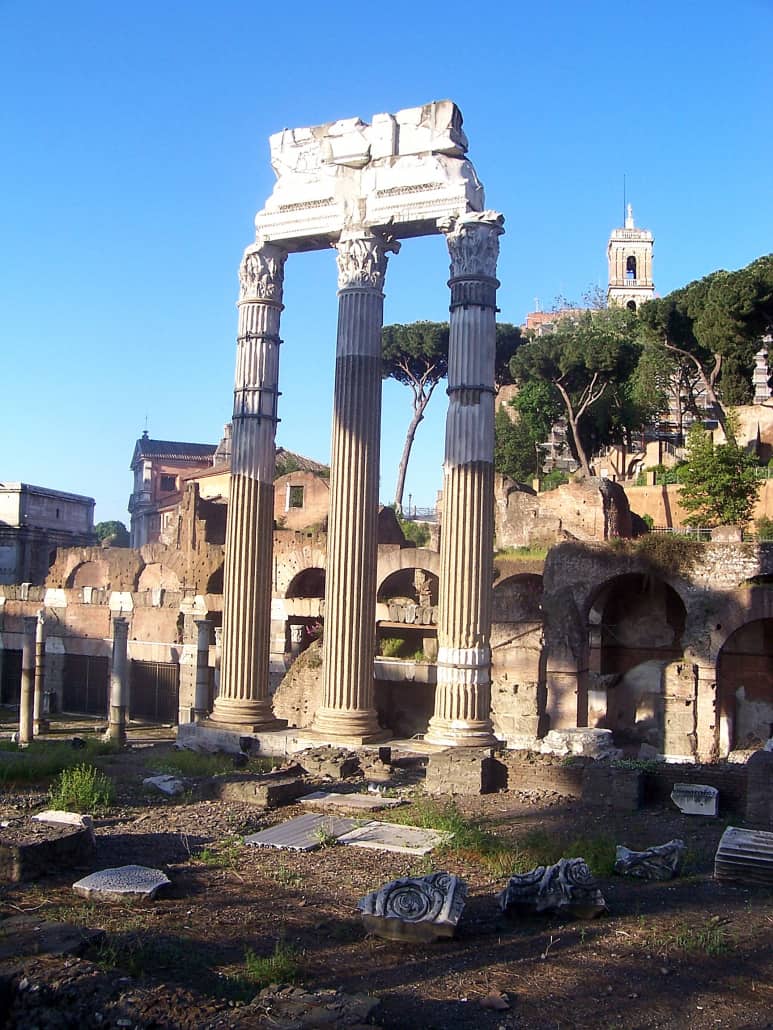 Your visit to Forum will skirt around a location Caesar had started to build but, because of his death, his adoptive son Augustus will complete the project later on, building also a second forum. The Temple of Venus is in reference to Caesar’s supposed divine origins. This is one of the few items left to see in Rome that can be traced to this great leader. Born to allow more breathing space as the original Republican Forums were stuffed packed by people and workers, Caesar ordered this new area stretching it to the east. In the years to come, others will be added. 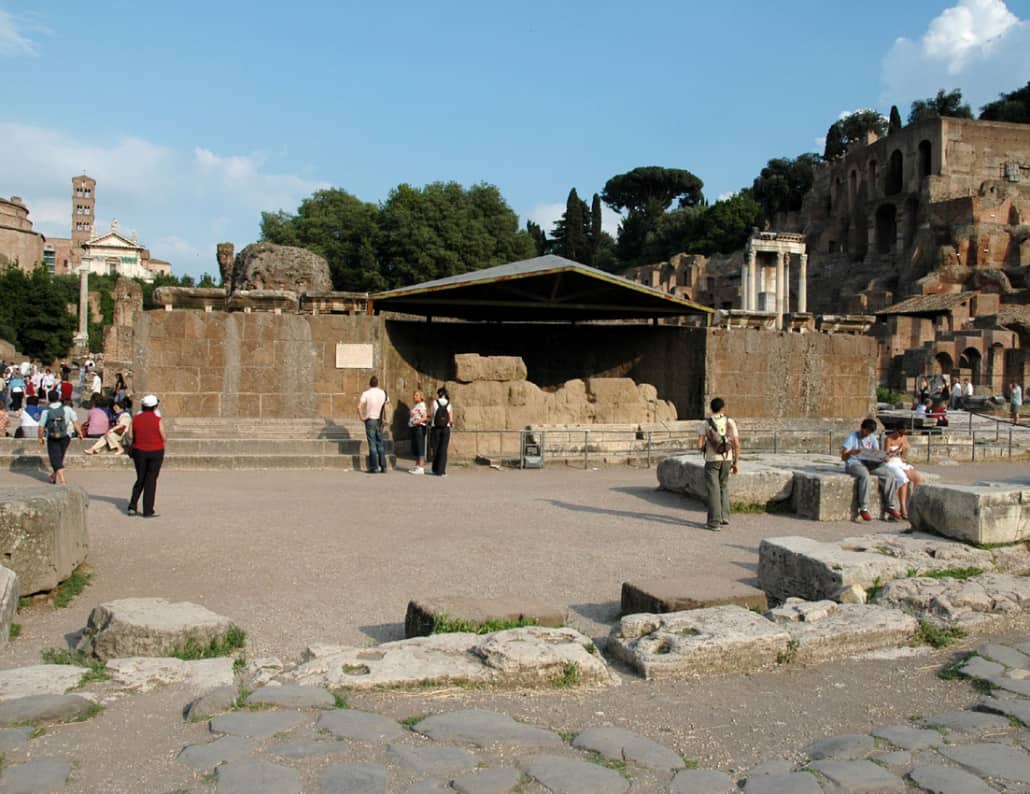 Temple of the Divine Julius

It is said that many strange events preceded and followed Caesar’s passing. One was Augustus, who was speaking to the Roman people one night and suddenly a comet flew by and hovered over them in the sky, a clear sign Caesar had been accepted among the Gods and supported his young heir, the future Emperor Augustus.

For that reason, a temple was built in memory of Julius, of which today in the Forum are some remains and the approximate location of the temple altar where for the longest of times, Romans have been leaving flowers and notes to the great leader. You can do it too! 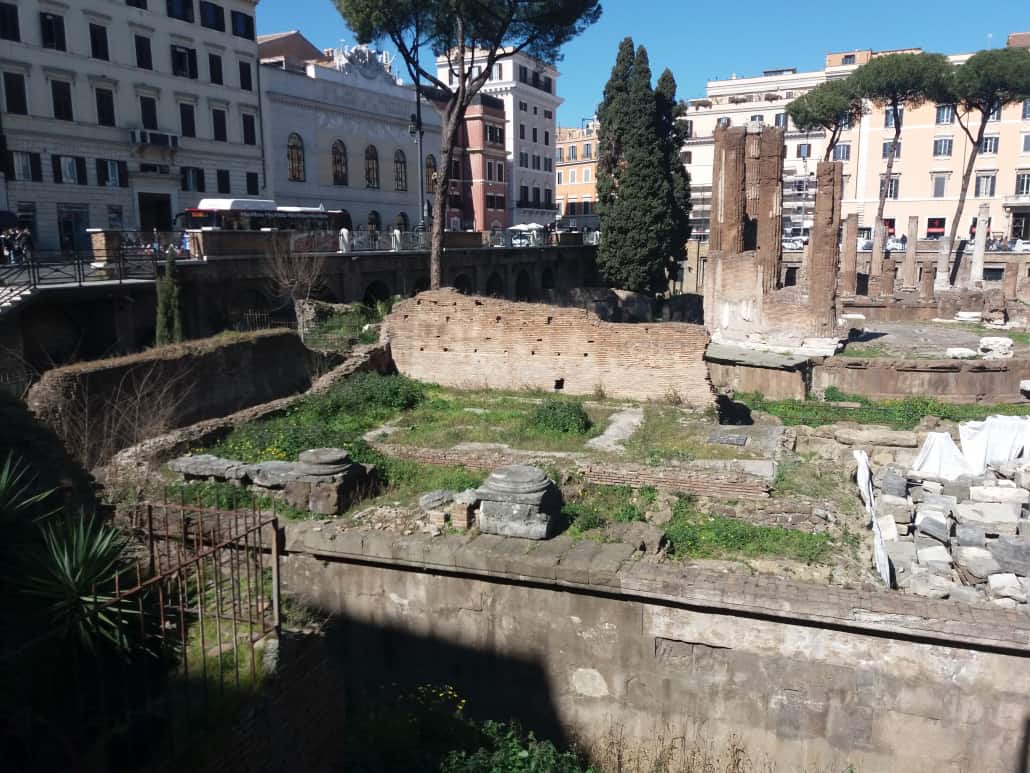 In the above photo, between the red bus and the tree is the modern “Teatro Argentina”. At the time, the temporary Senate gathered here and so did Caesar on that fateful day of the Ides of March and the ruins are below the theater. Excavations have studied the site and there is an insistent rumor that the location “of Caesar’s seat” has been found.

Beware of the Ides of March 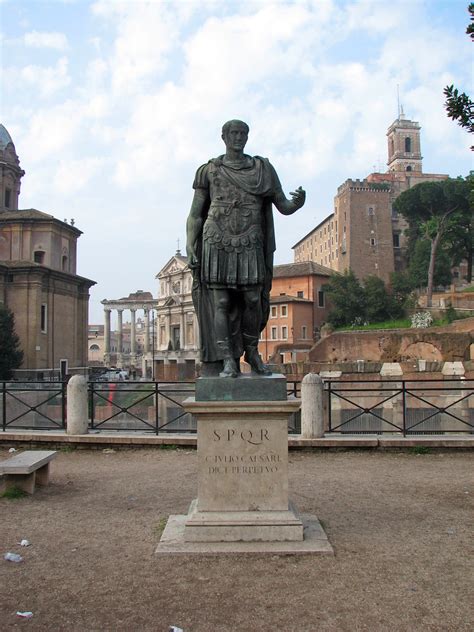 The bronze statue – replica- of Caesar is positioned along the Imperial Forums on the main road, his back pointed at his own forum. commonly candles, wreathes, or other items of devotion are laid by the statue, most commonly for soccer game victories of the local team Roma or the national team, as well as local festivities that involve ancient Rome.

Don’t miss out on the opportunity to make a couple quick detours to see these couple items along the way. We can help you work through this list of sites if you like.