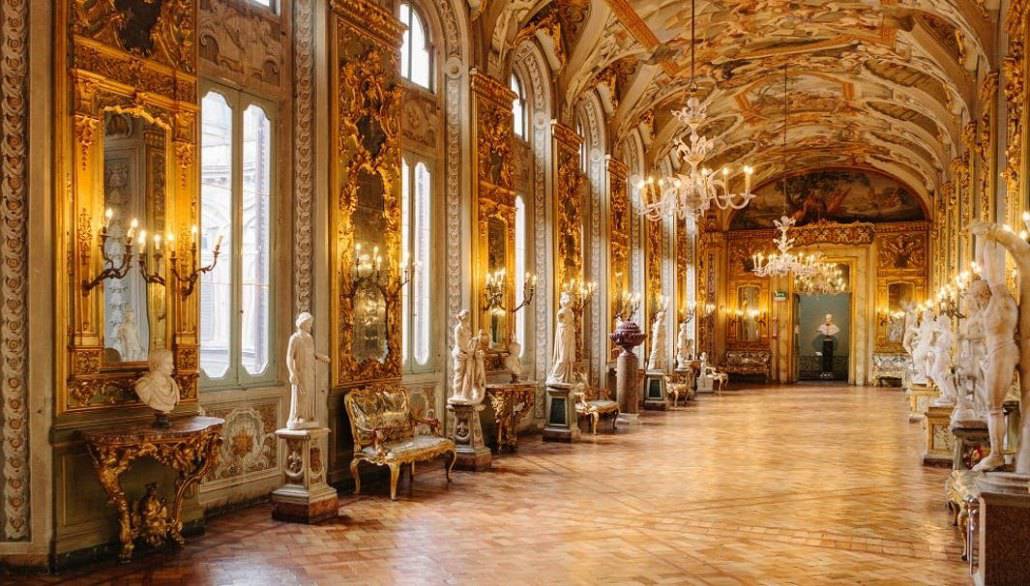 One could spend a lifetime exploring the vast collections of art and artefacts in Rome, but it’s easy to get caught up in the typical highlights. While The Vatican Museums are incomparable, the Colosseum is absolutely wondrous, and the cities piazzas and fountains are undoubtedly dazzling – there much left to behold! Here is a guide for return visitors, enthusiastic expats, or anyone simply looking to dig a bit deeper and discover the lesser known gems of the Eternal City. 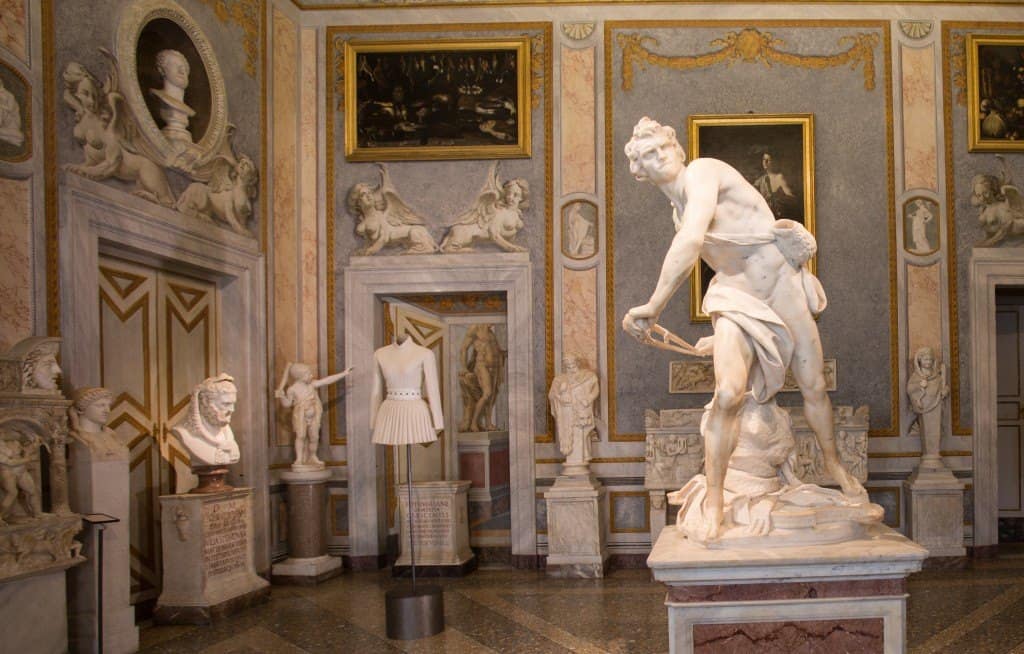 While the Borghese Gallery houses one of the most impressive art collections in the world, it’s often overlooked by more Iconic Roman destinations, like the Vatican and Colosseum. The stunning collection of the Borghese family, which was started in 1607 by Cardinal Scipione Caffarelli Borghese, can be found within the lush Borghese Gardens. Exquisite marble inlays, mosaics, and frescoed walls house masterpieces by Caravaggio, Tiziano, and Raphael. Most notable, though, are the impeccable sculptures of Bernini – including his world-renowned portrayals of “Daphne and Apollo” and “The Rape of Persephone”. Tickets must be booked in advance, with date and time specified, as visits are regulated to 2 hour time slots.

Not to be confused with the former Pamphilj Palace in Piazza Navona, this true gem is located right in the heart of the historic center. Tourists pass by on the main stretch of Via del Corso completely oblivious to the beauty within this royal family palace, which is still owned and inhabited by the Pamphilj family. An excellent audio guide, recorded by Prince Jonathan Doria Pamphilj himself, provides an insightful narration as guests make their way through the lavish corridors, peeping into rooms literally fit for royalty. Gold paint glimmers in the art gallery, which includes stunning works by artists such as Caravaggio, Raphael, Bernini, Titian, Carracci, Reni, and Brueghel, which the family has been collecting since the 16th century. 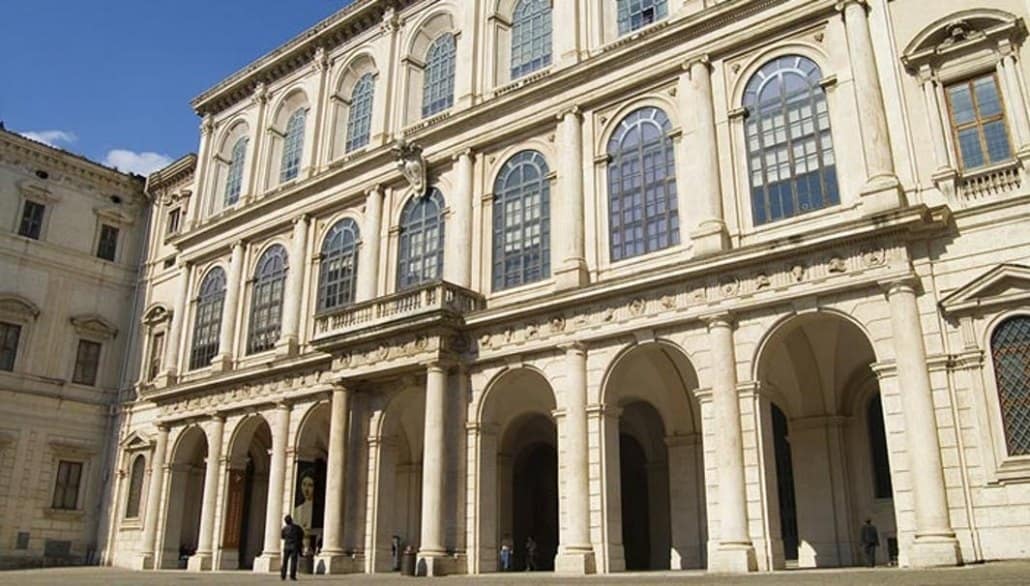 As part of the National Gallery of Ancient Art, the 16th century Palazzo Barberini houses a vast collection of important works, including paintings by Raphael and Caravaggio. The palace was built for Pope Urban VIII from 1627 to 1633 by three legendary Italian architects: Carlo Moderna, Gian Lorenzo Bernini, and Francesco Borromini, the latter of whom was responsible for the famous helicoidal staircase. Pietro Cordona’s Baroque frescoes of “Allegory of Divine Providence and Barberini Power” adorn the salon ceiling, providing an exceptional grand finale upon a visit’s end. In addition to the permanent collection, a second gallery area hosts temporary exhibitions which can be visited for an extra fee or ticket cost. 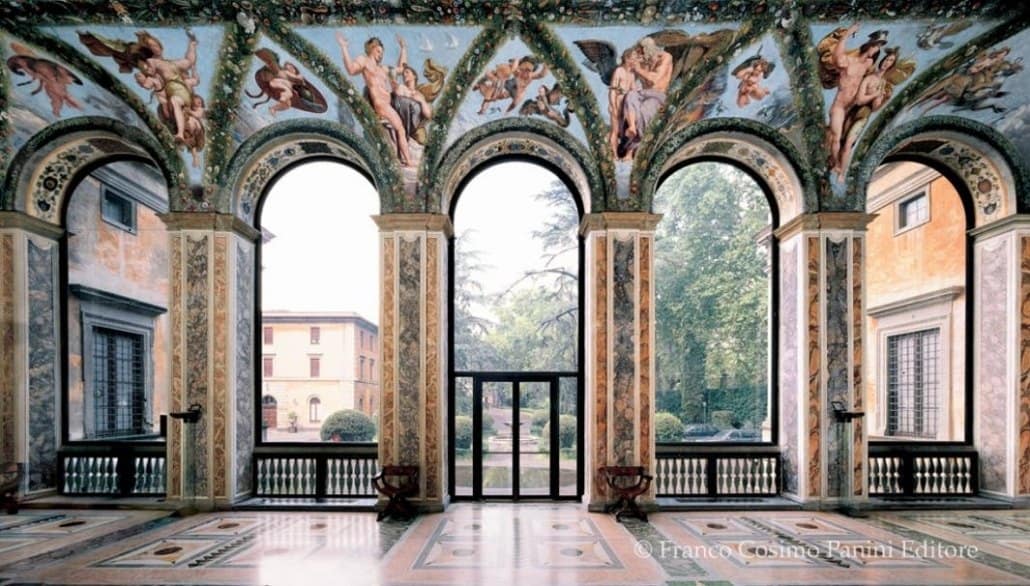 Located in the charming neighborhood of Trastevere, this suburban Renaissance villa boasts the spectacular art collection of the Farnese family. Since its completion in 1510, it has been inhabited by wealthy tenants such as the Farnese family, the Bourbon family of Naples, and, in 1861, the Spanish Ambassador of Rome. Now owned by the state, the villa houses the Roman Academy of Sciences, but a portion is still open to the public. While frescoes by Sebastiano del Piombo, Giulio Romano, and Il Sodoma are sure to delight visitors, it is Raphael’s rare secular frescoes, depicting the myths of “Cupid and Psyche” and “The Triumph of Galatea”, that steal the spotlight. 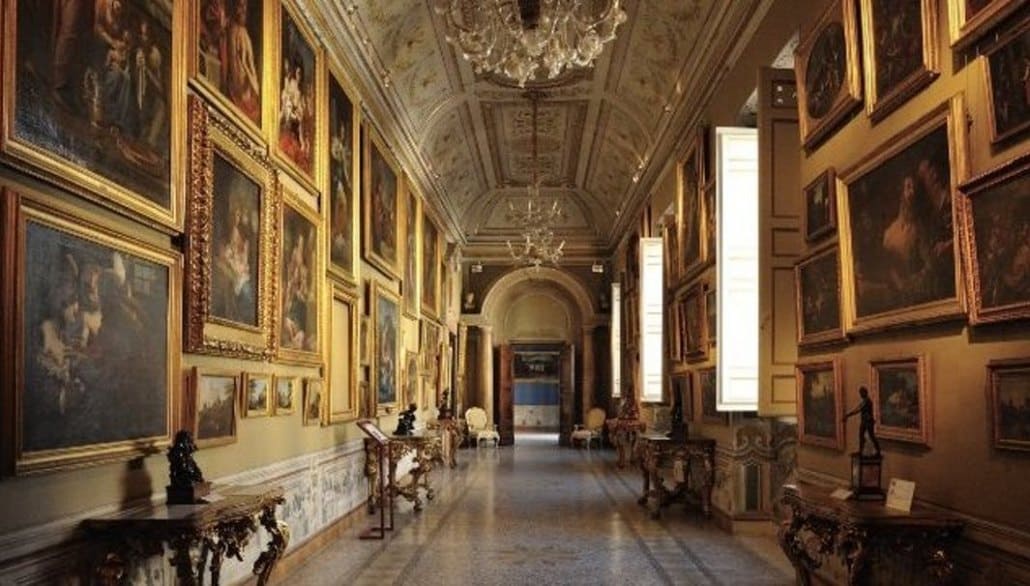 Just across the street from Villa Farnesina, the first floor of this late Baroque palace houses part of the National Gallery of Ancient Art, collected since the 17th century by the Corsini papal family. In 1730 Cardinal Neri Maria Corsini initiated the construction of the villa to house his valuable collection, which grew over time thanks to additions made by members of the family, including Pope Clement VII. The artworks, ranging from Early Renaissance to late 18th century, include contributions by widely-adored Italian painters such as Carracci, Gentileschi, Reni, and even Caravaggio. The neighboring gardens, part of the Botanical Garden of La Sapienza University,  rise up onto Janiculum Hill behind the palace. 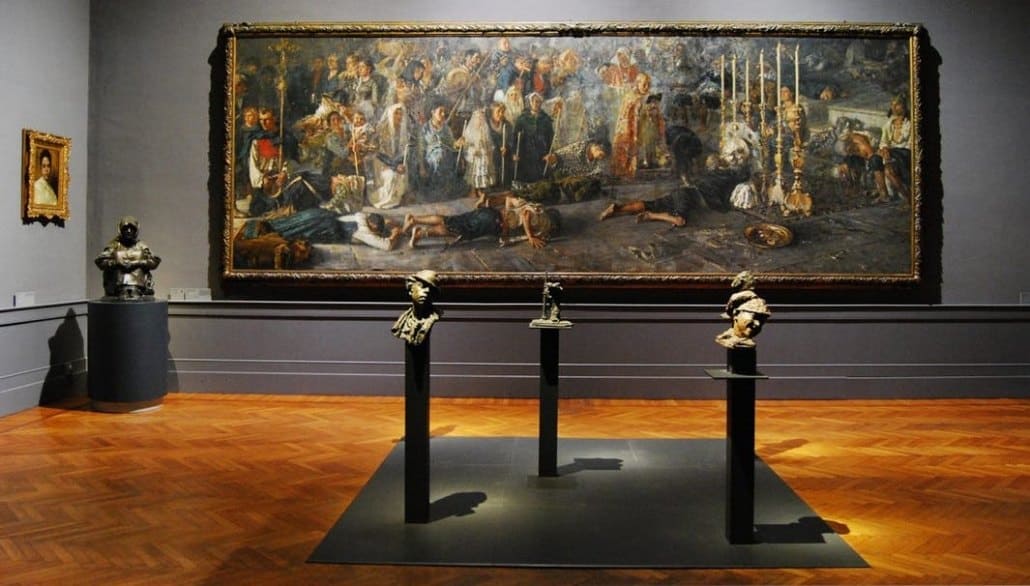 Though modern art is probably not the first thing that comes to one’s mind in Rome, the National Gallery of Modern Art offers a surprisingly delightful respite from typical ancient and classical themes of the Eternal City. On the edge of Villa Borghese, the Palace of Fine Arts was completed at the turn of the 20th century and now houses more than 1,100 19th and 20th century paintings and sculptures – the largest modern art collection in Italy. Works by artists like Degas, Duchamp, Kandinsky, Modigliani, Mondrian, Monet, Pollock, Rodin, and Van Gogh can all be found inside, but the “Sala di Canova” is one of the most impressionable highlights – and was even featured in the 2017 action film “John Wick 2”. 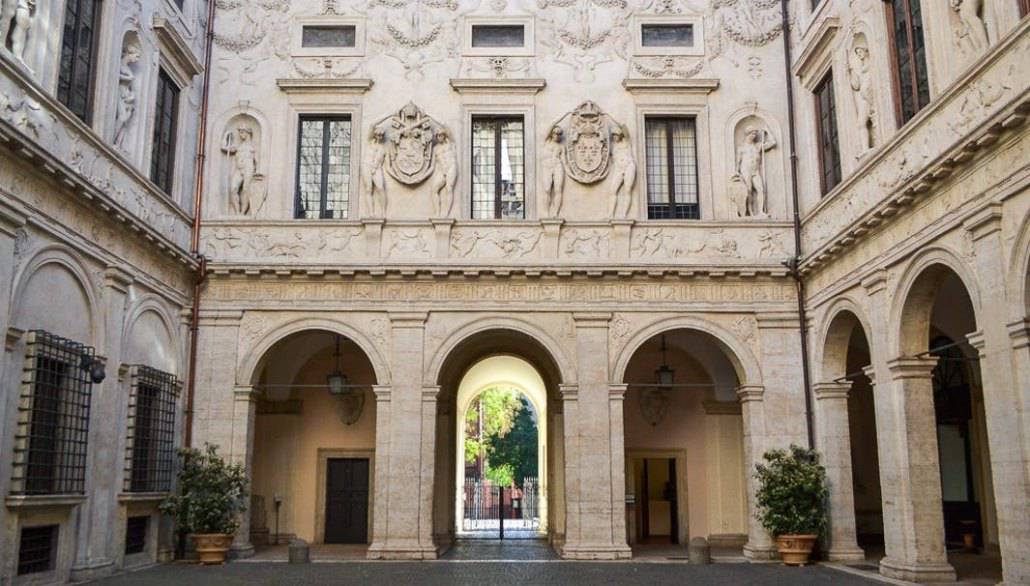 One of the most important national museums of Baroque painting, the spectacular Spada Gallery, is housed within an ornate Renaissance building just steps from the bustling Piazza of Campo dei Fiori. Roman heroes and emperors embellish the facade while mythical depictions of gods and goddesses fill the courtyard. The collection of 17th century Roman noble families includes highlights by Guido Reni, Gentileschi, Titian, and Brueghel, amongst a vast array of Caravaggio-inspired paintings. The “secret garden”, designed by famous Italian architect Borromini, features his illusionistic masterpiece in the “perspective gallery”. 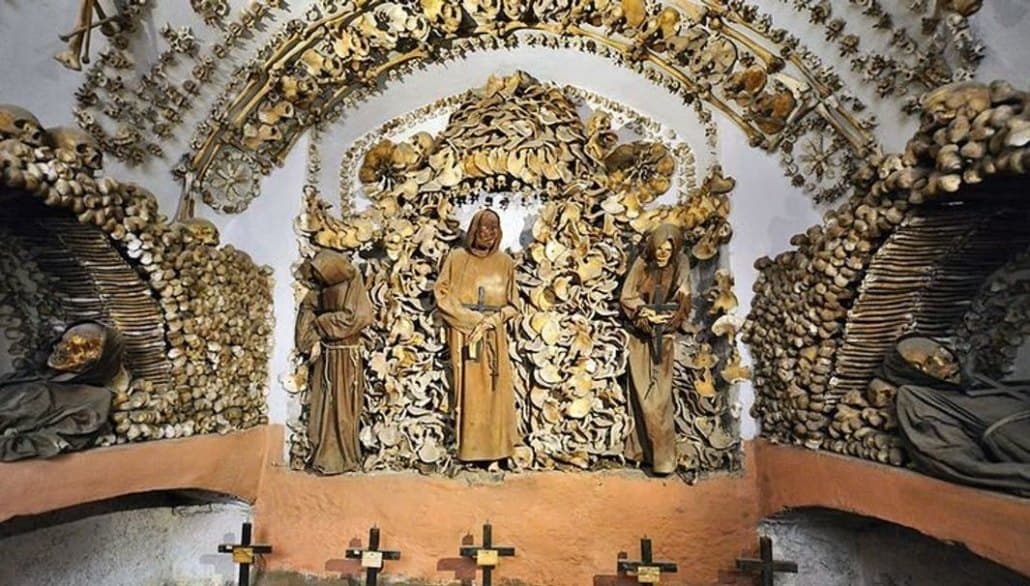 For those looking for a completely unique, a visit to the Capuchin Crypts should do the trick. Located within the Museum of the Capuchin Friars, beneath the Church of Our Lady of the Conception of the Capuchins, the Crypt contains the remains of 3,700 Capuchin friars. When the Capuchins arrived with bones in tow in 1631, Pope Urban VIII ordered soil for the crypt to be brought from Jerusalem while Friar Michael of Bergamo oversaw the placement of the remains amongst 6 different rooms: The Crypt of the Resurrection, the Mass Chapel, Crypt of the Skulls, Crypt of the Pelvises, Crypt of the Leg and Thigh Bones, and the Crypt of the Three Skeletons, where guests will find a placard that reads, “What you are now we used to be; what we are now you will be…” While the museum portion is not particularly special, the crypt provides an incomparably obscure experience!

*Ticket price reductions may be available for children, students, seniors, groups and visitors under the age of 26. Check the website for each destination to find more information.

*Most museums do not allow visitors to enter less than one hour before closing time.

*All hours are subject to change, especially for public or Catholic holidays.