Top 10 Secrets of the Sistine Chapel 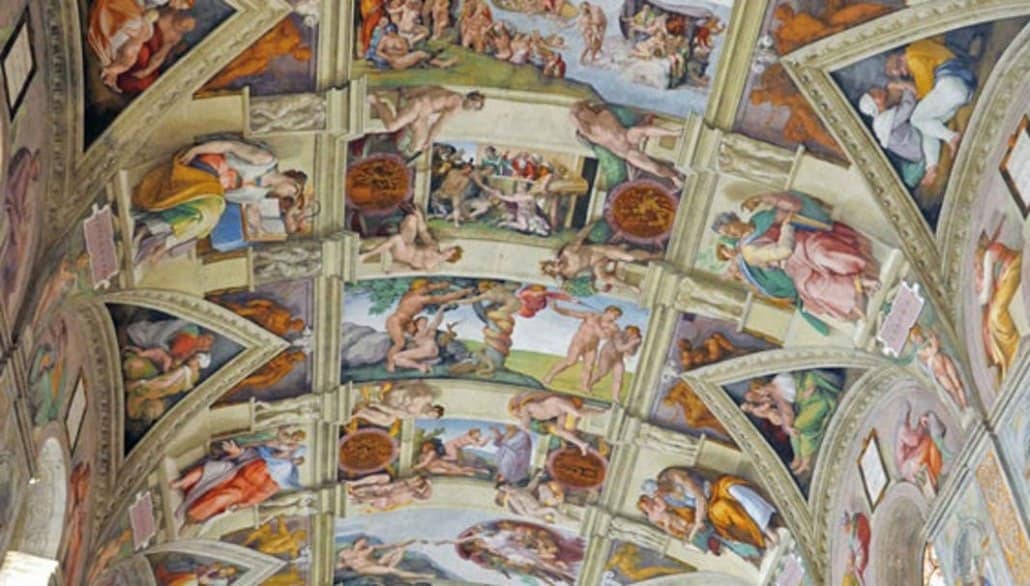 In addition to being one of the most beautifully decorated places in the world, the Sistine Chapel has been the focus of numerous historical studies and artistic observations which have revealed many secrets throughout the centuries. Keep reading to discover 10 fascinating secrets about the Sistine Chapel and its incredible creation! 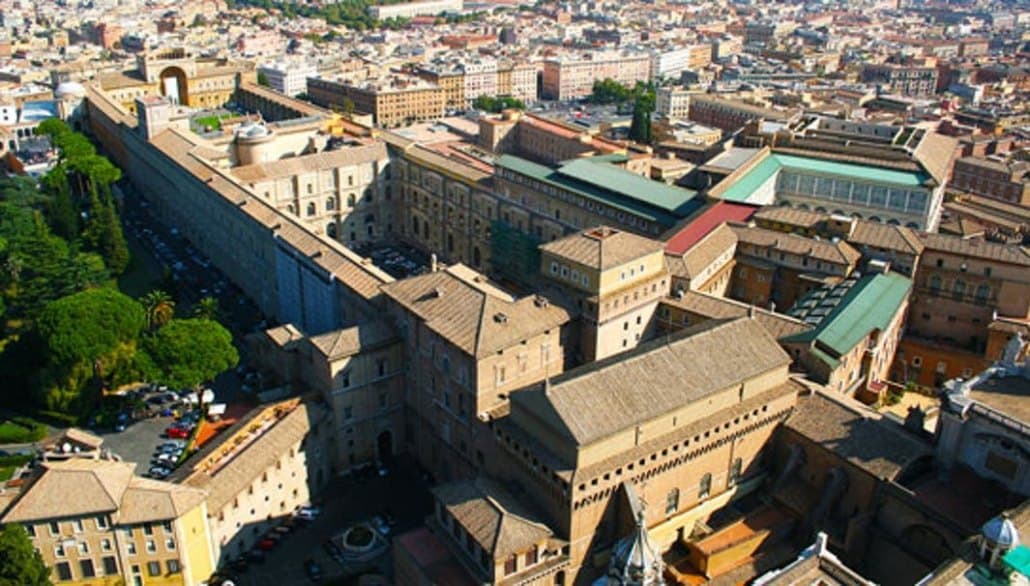 When a new pope is elected, white smoke is emitted from the chimney of the Sistine Chapel to tell the world the great news!

Since 1870, the Sistine Chapel has been used for the papal conclave, the meeting in which cardinal electors select a new pope. This meaningful ceremony is easily one of the most important events for the Catholic Church as it has the potential to influence the course of history forever! A special chimney on the roof communicates the conclave’s decision to people all over the world who eagerly await the news. While white smoke means a new pope has been elected, black smoke signals that a candidate has not yet been chosen.

Once elected, the new pope enters the Camera Lacrimatoria, a small and historical room next to the Sistine Chapel, to change into a set of pontifical choir robes. According to tradition, the chapel was given the nickname “The Room of Tears” due to the fact that many of the elected popes wept from the emotion of their new appointment.

2. So Just How Much Art Covers The Sistine Chapel 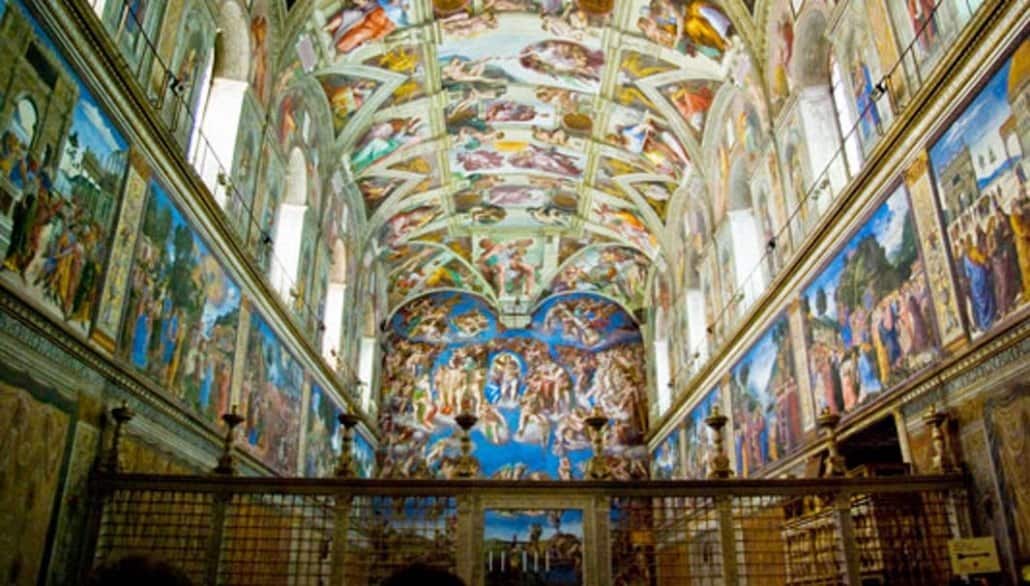 You will never run out of things to look at within the walls of the Sistine Chapel!

Inside the Sistine Chapel, there are remarkable paintings that altogether cover 1,100 square meters of its walls. The most famous, of course, is Michelangelo’s Sistine Chapel ceiling fresco which covers a staggering 460 square meters alone. “The Last Judgment,” painted on the altar wall by the same artist decades later, covers the second largest area of 168 square meters.

To say the least, your eyes will never run out of places to look in the Sistine Chapel! Enjoy a guided tour of Vatican with us. Want to see what we are talking about? Take a virtual tour of the Sistine Chapel for free on the Vatican Museums’ official website. 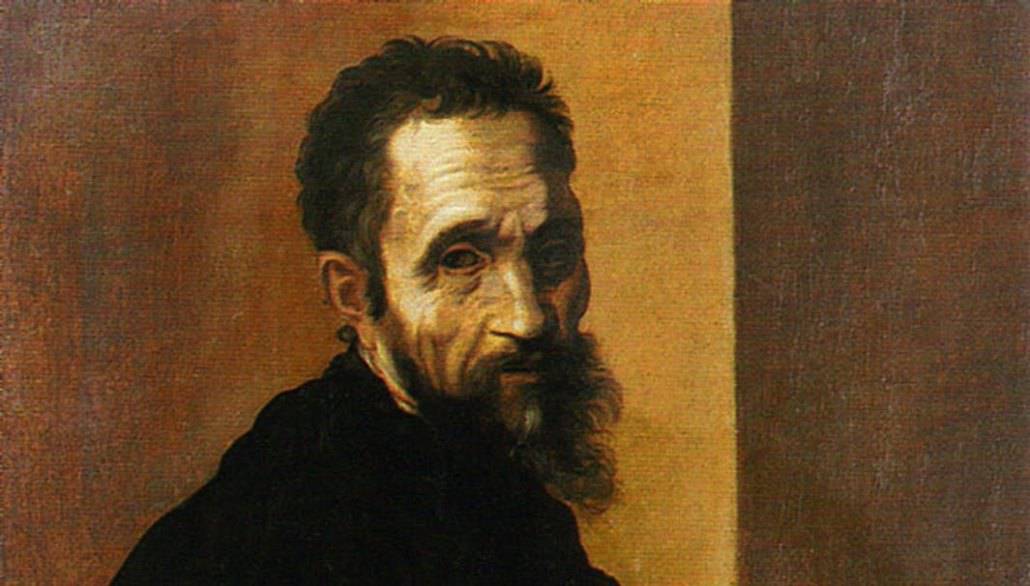 Michelangelo’s specialty was sculpting, not painting; thus he was reluctant to accept the offer to paint the iconic ceiling that we know today. Portrait of Michelangelo at 60 by Jacopino del Conte after 1535.

Something that many people don’t realize is that Michelangelo was actually forced to paint the Sistine Chapel ceiling, his greatest masterpiece, against his will. Pope Julius II was a great fan of Michelangelo’s artwork and, regardless of the fact that the artist had no experience with the fresco technique, insisted that he paint the ceiling, “or else…!”

The young artist, just thirty-three years old at the time, had no choice but to accept and completed the grand work in just four years between 1508 and 1512. Through practice, he was able to correct his technique over time. If you look closely at the ceiling, you can tell that in some panels the figures appear larger than others. This is because the inexperienced Michelangelo realized that he needed to start making the figures bigger so that you could see them better from the ground floor! 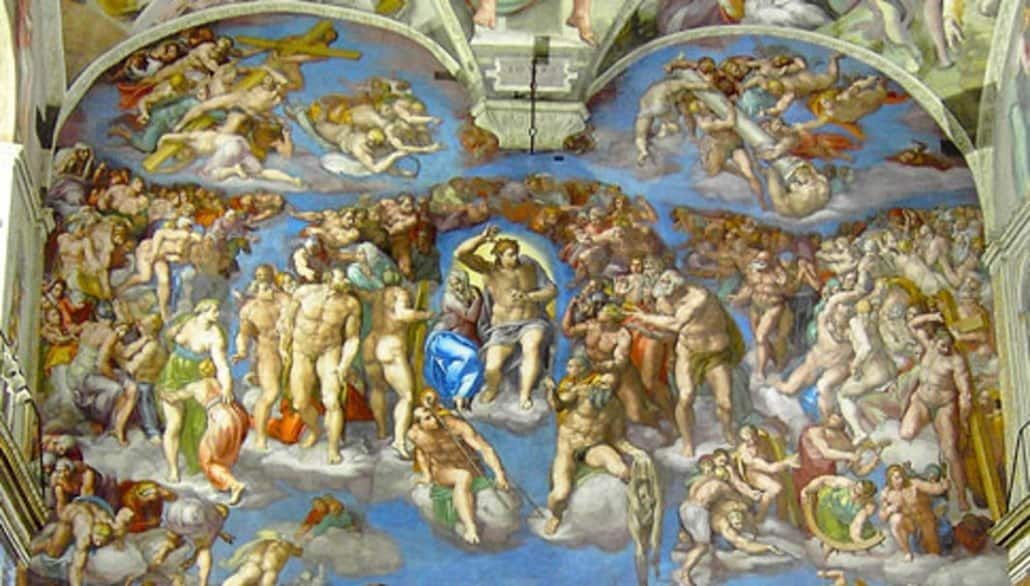 The Catholic Church was not happy with Michelangelo’s decision to paint his figures completely nude, so fabric was added on following his death

Michelangelo’s art in the Sistine Chapel was some of the most controversial of its time. Commissioned over twenty years after the ceiling was completed, The Last Judgement fresco once looked very different than it does today. How, you might ask? Well, upon its completion in 1541 when Michelangelo was nearly sixty-seven years old, many of the figures (angels, demons, saints, and sinners included) were depicted completely nude.

Michelangelo explained that the resurrected would enter heaven nude, as God created them, but the church was not too keen on the presentation. After Michelangelo’s death, Italian artist Daniele da Volterra was commissioned to add clothes and drapery to the figures for a more modest finish. Nudity aside, the Last Judgment also marked the first representation of God with a muscular, human-like body and no beard.

5. The Sistine Chapel Has a Choir – & It’s One of the Oldest in the World! 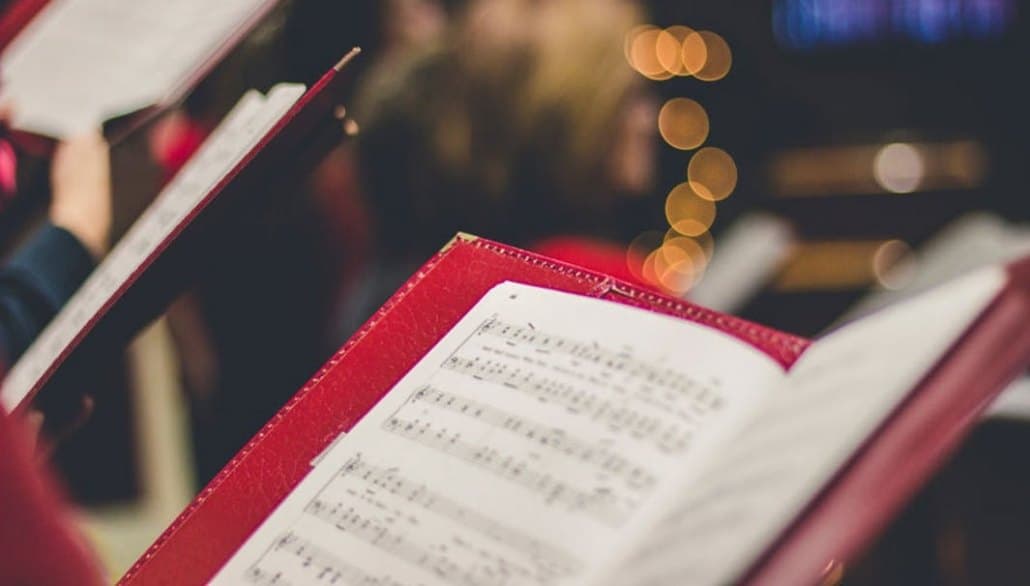 Listening to the beautiful voices of the Sistine Chapel’s very own choir is enough to give you goosebumps!

The Cappella Musicale Pontificia has been responsible for the musical accompaniment of the liturgy since its establishment as the personal choir of the pope in 1471. This prestigious singing group usually consists of 20 men, singing bass and tenor, and 30 boys, who are able to sing the higher alto and soprano parts. They perform all around the globe and have lots of impressive concert recordings on YouTube and even Spotify that are truly breathtaking to listen to!

6. Hidden Symbolism in the Famous Ceiling 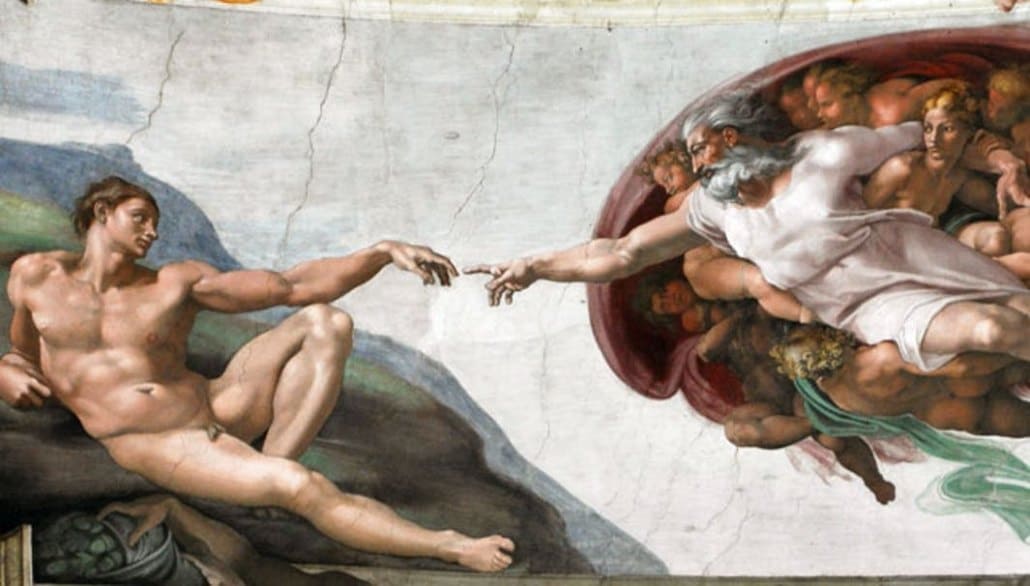 While the ceiling of the Sistine Chapel depicts religious themes, Michelangelo also pays tribute to science and anatomy

Throughout the centuries, experts have analyzed and discovered hidden symbolism within Michelangelo’s paintings, proving just how brilliant and ahead of his time the artist truly was. For example, it is apparent that there is a shape similar to a brain and spinal cord in the central panel “The Creation of Adam.” It has been suggested that this panel represents God giving men life and intelligence whilst the spinal cord might have represented the conflicting relationship between Michelangelo and the Catholic Church.

As an artist of the Renaissance, most often commissioned by the Catholic church, he was expected to portray heavily religious subjects. But, of course, Michelangelo was also a man with a keen interest in anatomy and science so it seems fitting that he referenced it in one of his most famous works!

7. Michelangelo Painted the Cieling While Standing, Not Laying Down

Contrary to popular belief, Michelangelo painted the iconic ceiling of the Sistine Chapel standing up, not laying down on his back! Custom wooden scaffolds were built to raise the artist up to the perfect height so that he could reach the ceiling. Despite the lift, the job was quite demanding. Imagine having to look up constantly for four years- after all that time it would really put a strain on your eyes! This alone goes to show the talent and dedication of Michelangelo and proves his right to be called a Renaissance master.

8. It Wasn’t Just the Work of Michelangelo! 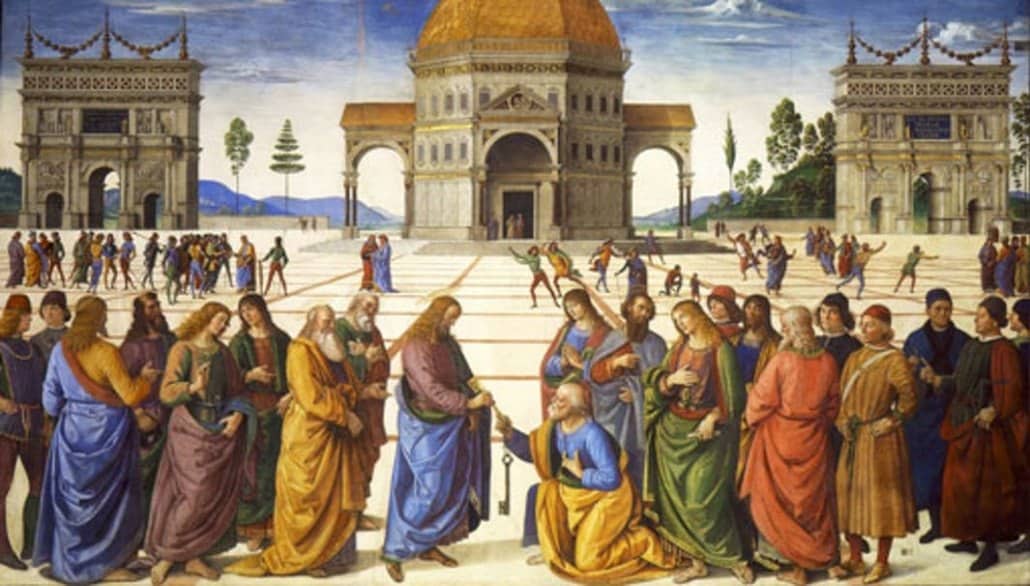 Michelangelo wasn’t the only one who left their mark- this famous work by Perugino is also housed in the Sistine Chapel!

The Sistine Chapel is famous for Michelangelo’s ceiling and massive wall fresco; however, he was not the only painter who created the masterpieces in this chapel! Other famous artists such as Sandro Botticelli, Domenico Ghirlandaio, Luca Signorelli, Biagio di Antonio Tucci, and Pietro Perugino are largely responsible for the magnificent works of art that line the towering side walls of the holy space.

The Sistine Chapel was also once home to a collection of spectacular works by the other Renaissance master, Raphael. Ten enormous tapestries, designed and executed by Rapheal in Brussels between 1516 and 1521, used to line the side walls of this stunning chapel as well.

9. Biblical Themes were Designed for the Pope in Power

Originally, the Sistine Chapel was the private chapel for whichever pope happened to be in power at the time. All of the artwork that adorns the chapel, including the paintings and previously hung tapestries, are based on biblical themes. These religious subjects presented important messages and morals of the Catholic Church for the pope to ponder.

10. When the Sistine Chapel Isn’t Being Used for Special Ceremonies, It’s Open to Visitors! 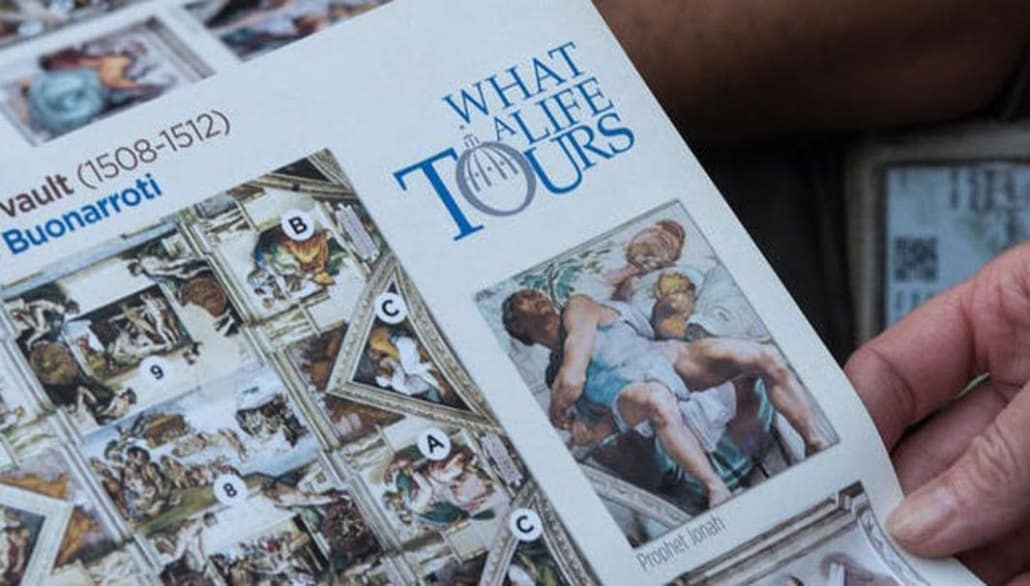 The Sistine Chapel currently serves as the headquarters of the most important appointments of the Catholic Church. Private masses and ceremonies are regularly held with the pope, cardinals, Swiss Guard, and other members of the clergy in attendance. However, when it is not in use for special events like this, the awe-inspiring Sistine Chapel is open to the public as part of the Vatican Museums!

See the Wonders of the Sistine Chapel on a Tour With Us!

Learn all about the secrets of the Sistine Chapel and much more on one of our popular Vatican tours! For more information or to arrange a tour check out What a Life Tours or contact us by phone +39 06 88975757/+39 334 7273299 (WhatsApp), or email at info@whatalifetours.com!