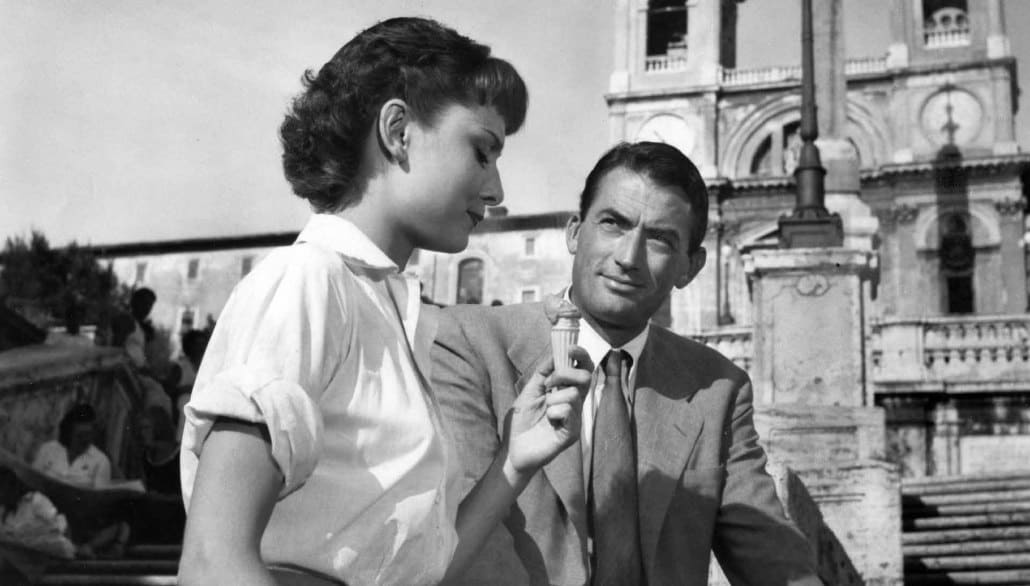 With such an undeniably romantic ambiance, it’s a wonder more films aren’t made in Rome! Perhaps the royalties are too high – regardless, we just love seeing The Eternal City on the silver screen! Here are some of our favourite Rome-based films, so you can prepare yourself for an upcoming adventure, reminisce about your travel memories, or simply pretend that you’re here! 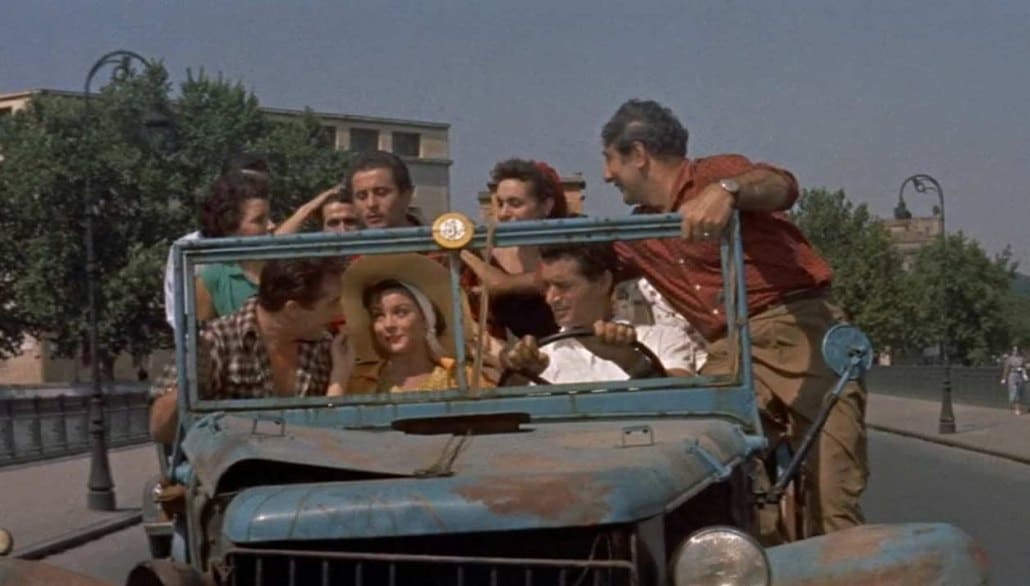 When it hit the silver screen in the 1950’s, Three Coins in the Fountain had a lot going for it! It utilised state-of-the-art technology for visuals and sound quality that simply hadn’t been used before. Applying technological innovation with a fabulous Frank Sinatra theme song, incredible views of Italy, and an over-the-top romantic plot resulted in a “classic” which had people booking their tickets to Rome immediately! Nowadays, it all seems a bit cheesy, but we’re still impressed by how much they pulled off for the time period – and grateful that the film sparked such an immense interest in the Eternal City! 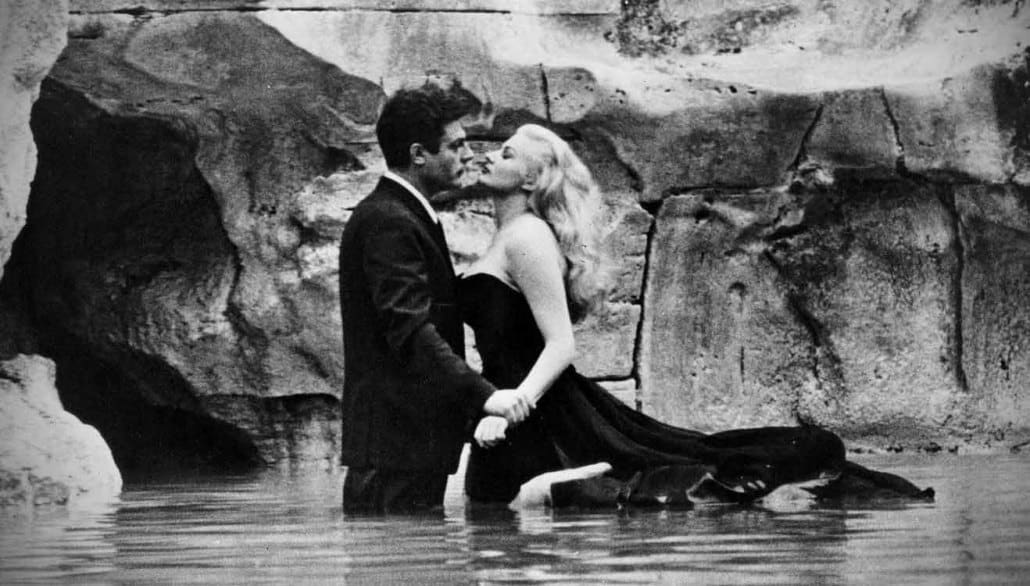 The iconic swim in the “Trevi Fountain”

Even with a non-existent plot and a chauvinistic theme, there’s something alluring about this classic – and that something is Rome. Federico Fellini’s three-hour Italian classic captures incredibly crafted scenes of the city as well as one of the dreamiest moments in cinema history: Anita Ekberg swimming in the Trevi Fountain! Just remember, this one is all about the visuals – and the envious feeling that we all get, wishing we could live “the sweet life” with the rich and famous in Rome, too! 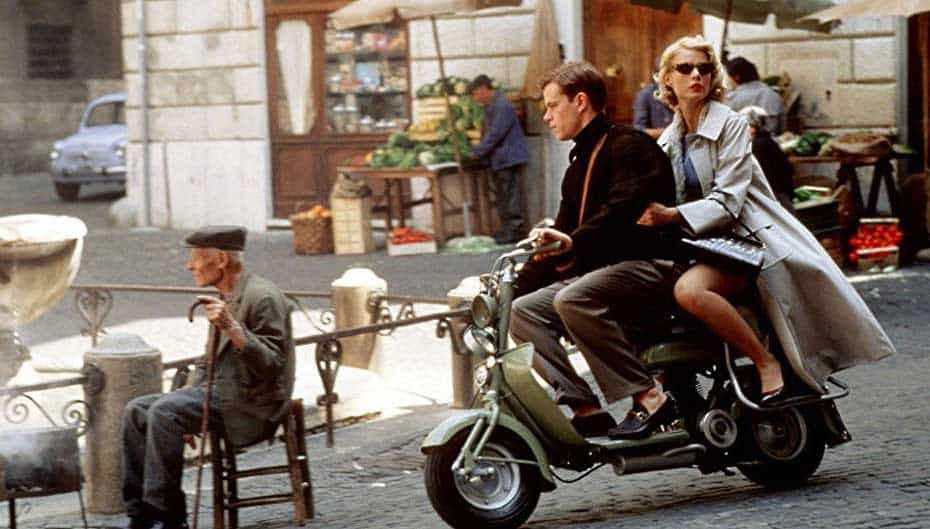 A-list stars Matt Damon and Jude Law star in this psychological thriller, served with a generous side of Italian scenery. Though the story starts in New York City, the protagonists (along with supporting characters played by Gwyneth Paltrow, Cate Blanchett, and Phillip Seymour-Hoffman) quickly find themselves in Italy, south of The Eternal City and eventually smack-dab in the centre of Rome – and, boy, is it exciting! 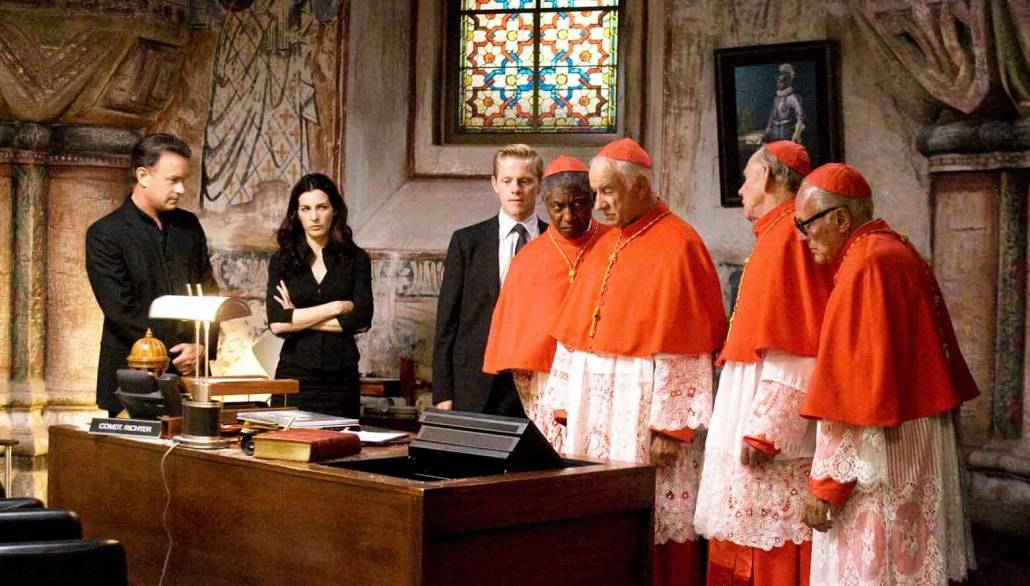 Though the thrilling mystery of “Angels and Demons” is 100% fictional, it undoubtedly launched a wave of renewed interest in Rome’s art and history after the release of Dan Brown’s novel in 2000, followed by the film in 2009. Inaccuracies and fairy tales aside, the beautiful scenery and top-notch acting by the lovable Tom Hanks made this a blockbuster win! 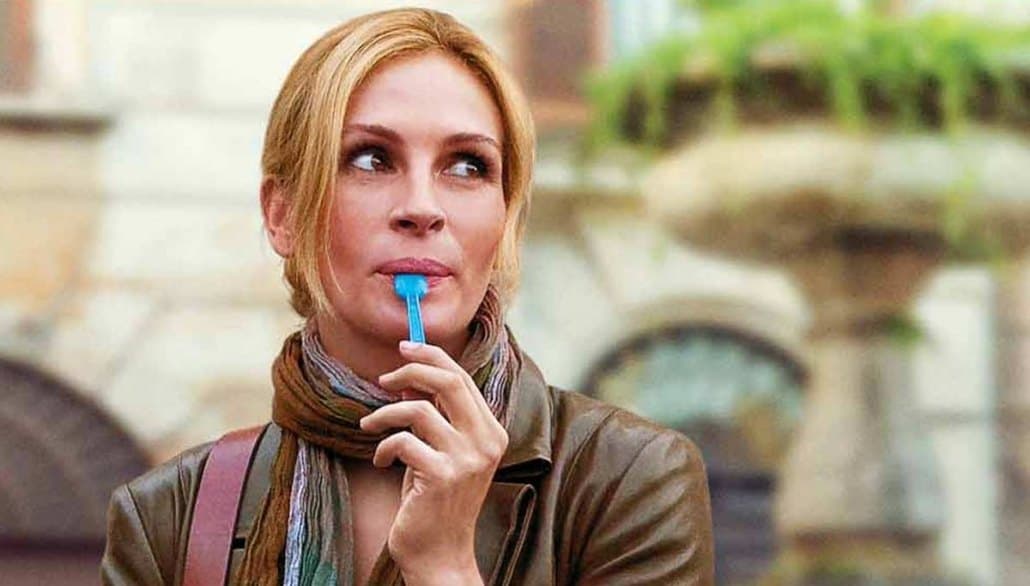 Looking back, “Eat Pray Love” seems to have sparked a flame in the feminist movement of the 21st century. Not only are young women striving to be strong and independent, but many are forcing themselves out of their comfort zone to travel the world ALL ALONE – much like Julia Roberts’ character in this light-hearted flick! To put it plainly, the leading lady takes off to Italy, India, and Indonesia on a journey of self-discovery. It will make you laugh, it will make you cry, and it will make you want pasta! 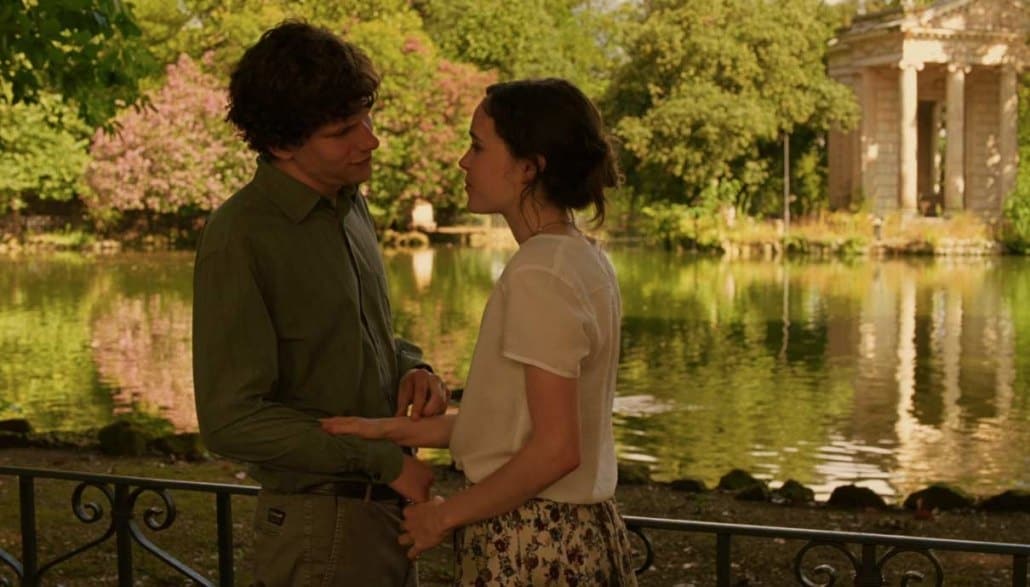 Ellen Page and Jesse Eisenberg go in for the kiss in Rome’s Villa Borghese. http://www.italymovietour.com/scene/to-rome-with-love-villa-borghese/

Quirky, as Woody Allen films are, and beautiful. Allen covers an impressively broad scope of Rome, from iconic Roman destinations to charming backstreets and secret gardens, which perfectly showcase the oddball characters played by Ellen Page, Alec Baldwin, Penelope Cruz, and even Woody Allen himself. The result is modern, funny, and romantic – what’s not to love? 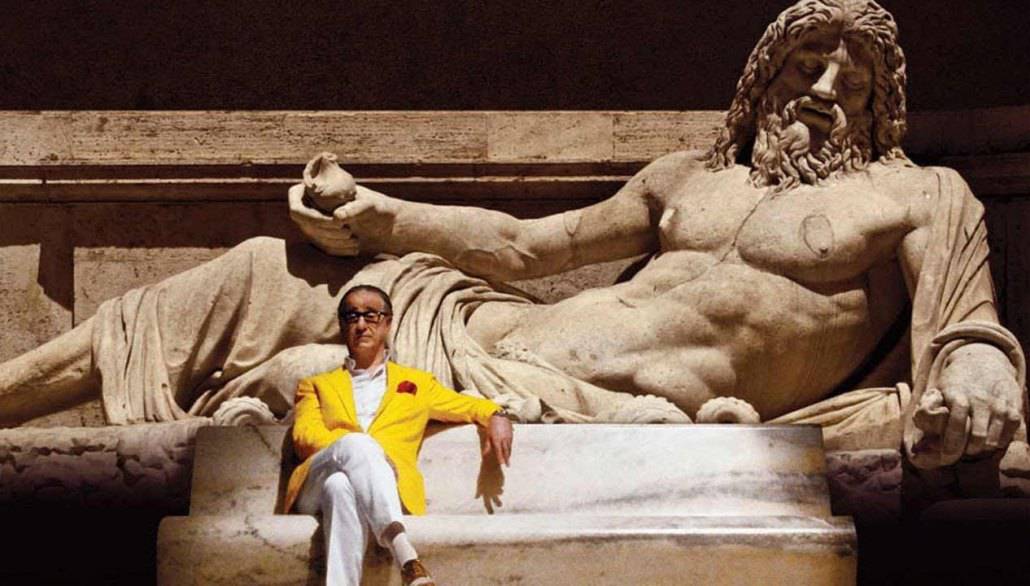 The stylish Toni Servillo sits in front of a gigantic Roman sculpture. http://www.orticalab.it/La-Grande-Bellezza-senza-veli-al

A visual feast, a delight for the senses, an aesthetic dream. This Academy Award winning flick showcases the true breath-taking beauty of Rome with very little actual story to follow. It’s more like an aloof conversational piece with an exceptional setting, featuring less famous (but, nonetheless, gorgeous) locations like the Aqueduct Park, the Holy Steps, and the Aqua Paola Fountain, which absolutely make it worth a watch! 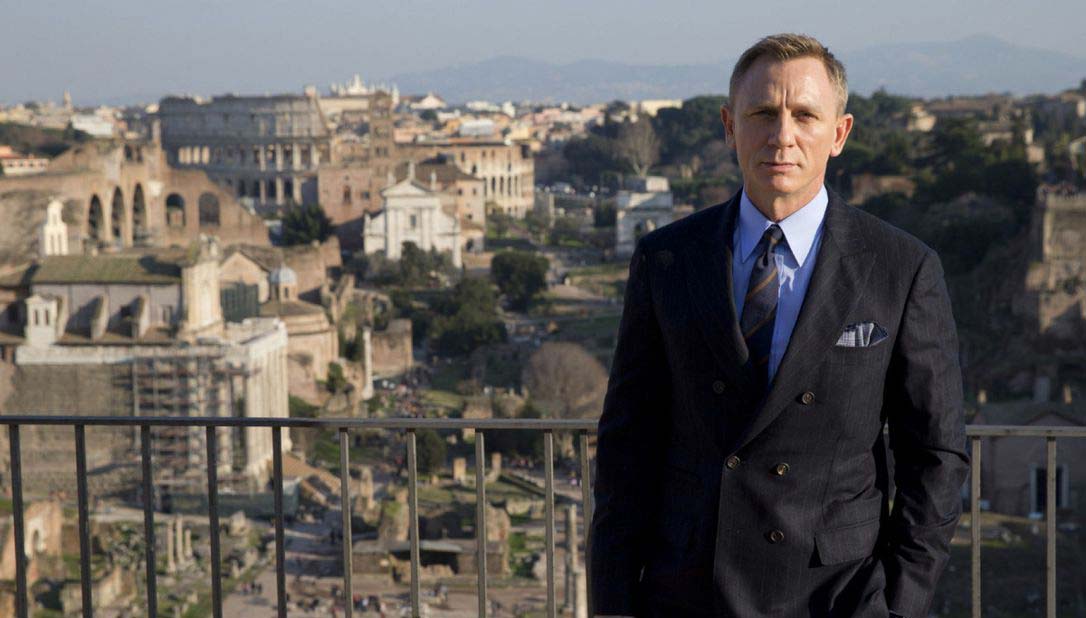 Daniel Craig in Rome to play James Bond in Spectre

Bond. James Bond. And that’s all you need to know.
Okay, but really, this is as action-packed and epic as any other James Bond film – complete with unbelievably beautiful celebrities (like Daniel Craig and Monica Bellucci – wow!), fancy cars, cutting edge technological gadgets, and incredible views of Rome. Can you imagine a more picturesque playground for the special agent’s adventures? 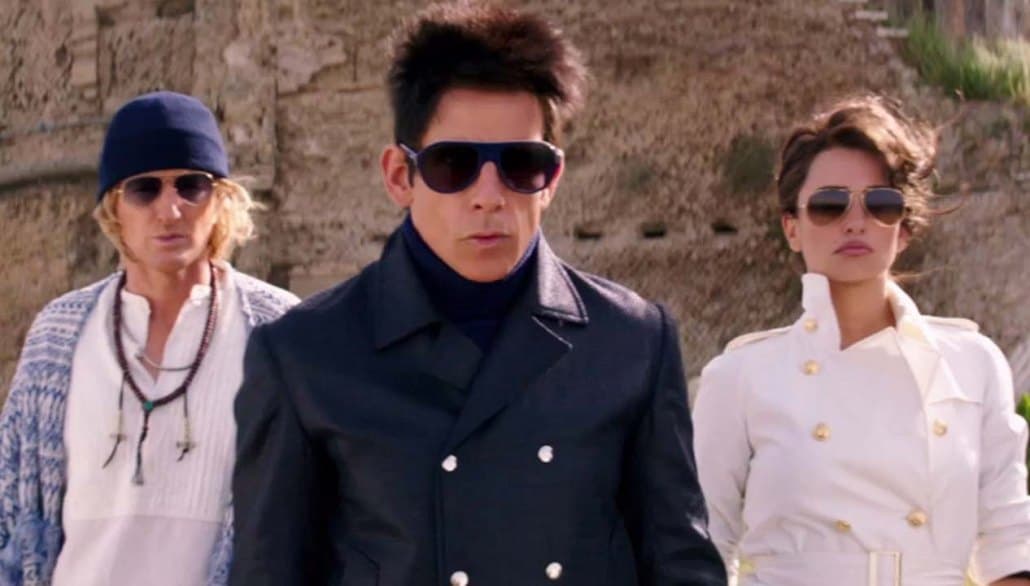 The Zoolander stars in Rome. http://www.jamovie.it/zoolander-2/

This sequel goes above and beyond – dare we say, even outshining the original Zoolander film! While the slap-stick comedy styles of Ben Stiller, Owen Wilson, and Will Ferrell aren’t for everyone, this production has so much more to offer. With countless cameos, action scenes, and fashion features all set in Rome, this movie is all-out-entertaining from start to finish.