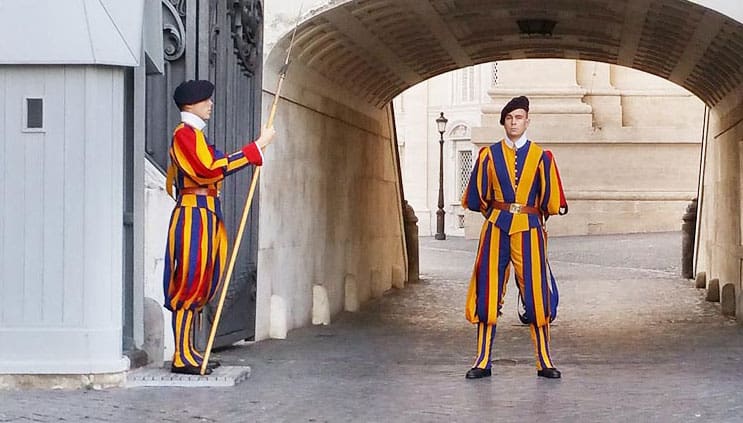 So, what exactly is the Swiss Guard anyway?

The Swiss Guard, or “Pontifical Guard”, makes up the smallest army in the world, comprised of 135 men who act as the private body guards of the Pope and, together with the “gendarmerie” (the Vatican Police), protect all entrance and exit points of the Vatican and Castel Gandolfo, the pope’s summer residence.

What is the history of the Swiss Guard? 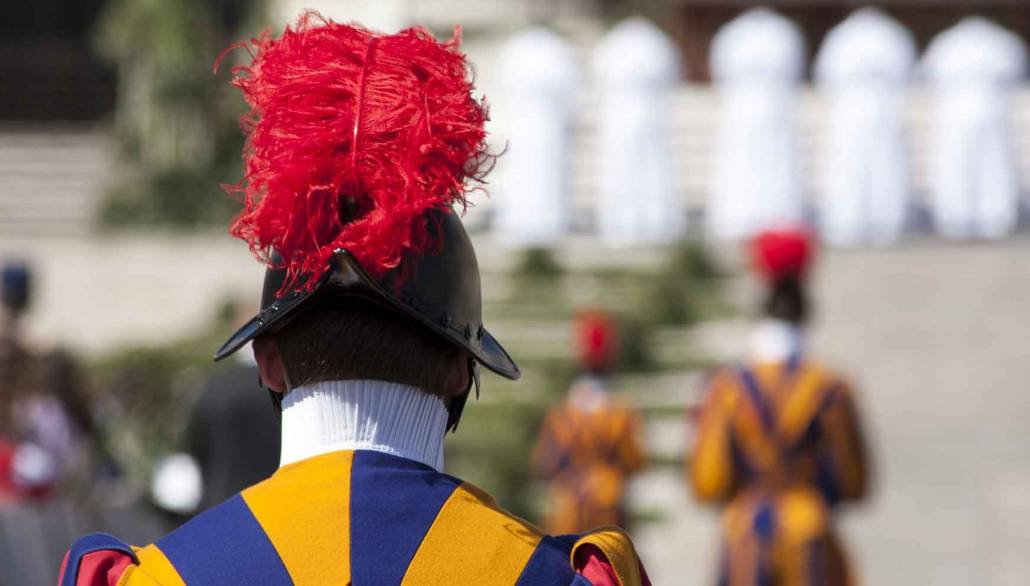 The Swiss Guard is one of the oldest functioning military corps in the world.

The order initially started as a simple alliance between the Swiss and Pope Sixtus IV (the pope responsible for the creation of both the Sistine Chapel and the Vatican archives). These mercenaries, who were revered for their bravery, were also utilized by the two popes who followed, putting the guards in position to play a pivotal role in what would later be called “The Italian Wars”.

It was on the 22nd of January 1506, however, that the order as we know it today was officially established under Pope Julius II (the nephew of Sixtus IV who also commissioned Michelangelo to paint the ceiling of the Sistine Chapel). While the order has seen its ups and downs over the years, being abandoned and re-established several times, their colorful uniforms are now a permanent fixture of the Vatican city-state.

Can anyone become a member of the Swiss Guard? 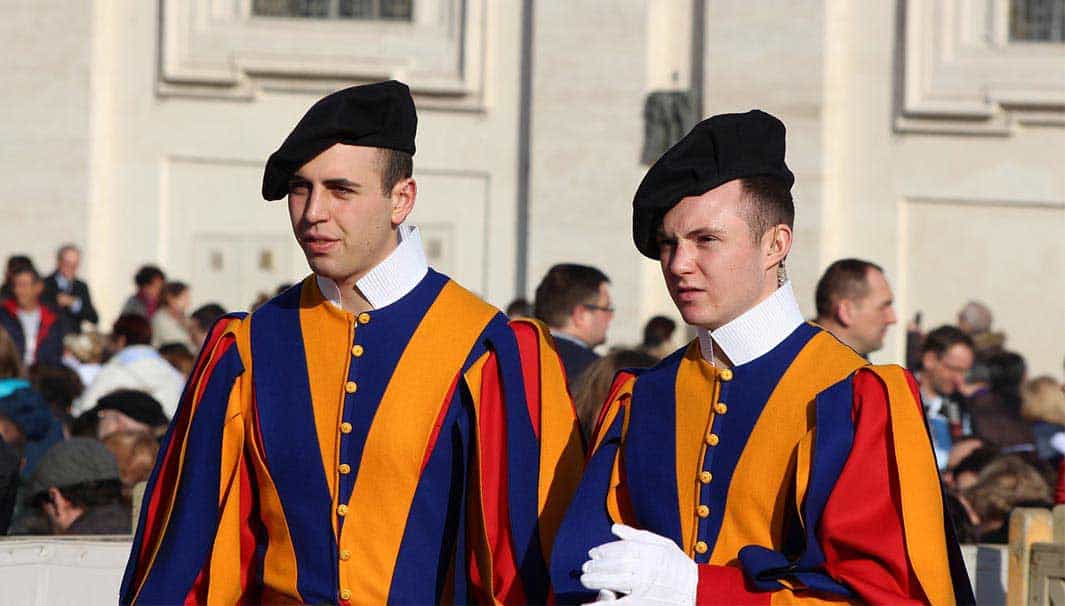 Becoming a Swiss Guard is not easy, for starters you must be Swiss, male, Catholic, single and under 30.

New recruits are sworn in each year on the 6th of May to coincide with the Sack of Rome in 1527, when 147 Swiss Guards lost their lives protecting Pope Clement VII. Unfortunately, though, a position in the guard is not easy to get. Today these men are generally recruited from central Switzerland (the German speaking part).

To qualify, they must be Swiss Catholic males, between the ages of 19 and 30 and reaching a minimum height requirement of 5’8” (174 cm). As if that didn’t make the choosing hard enough, these men must also have undergone mandatory military service in Switzerland and mustn’t be married. Although they are eventually allowed to marry, this is usually only permitted to those over the age of 25 who have reached the rank of Corporal.

A few words on the Swiss Guard’s famous uniforms… 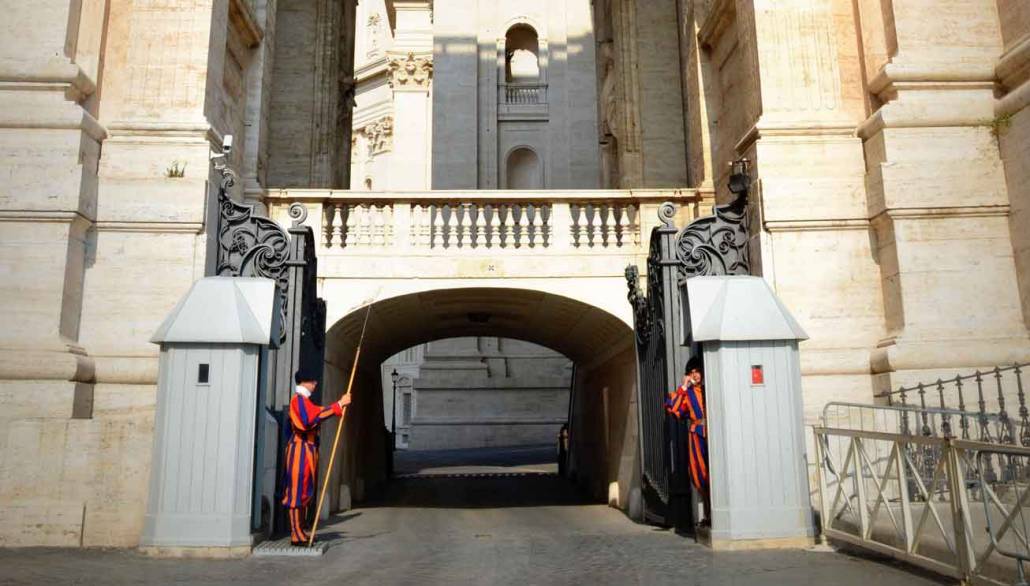 C’mon, you have to admit you’d like to try one on!

Contrary to popular belief, their uniforms were not designed by Michelangelo or Raphael. While the original designer remains unknown, the uniforms seen today were updated in 1914 by Jules Repond (former commander of the Swiss Guards). Keeping with the original Renaissance design and colours (a combination of the “Della Rovere” and “Medici” family banners), each uniform, made up of 154 pieces, is tailor-made inside the Vatican for each member of the guard.

What weapons does the Swiss Guards carry? 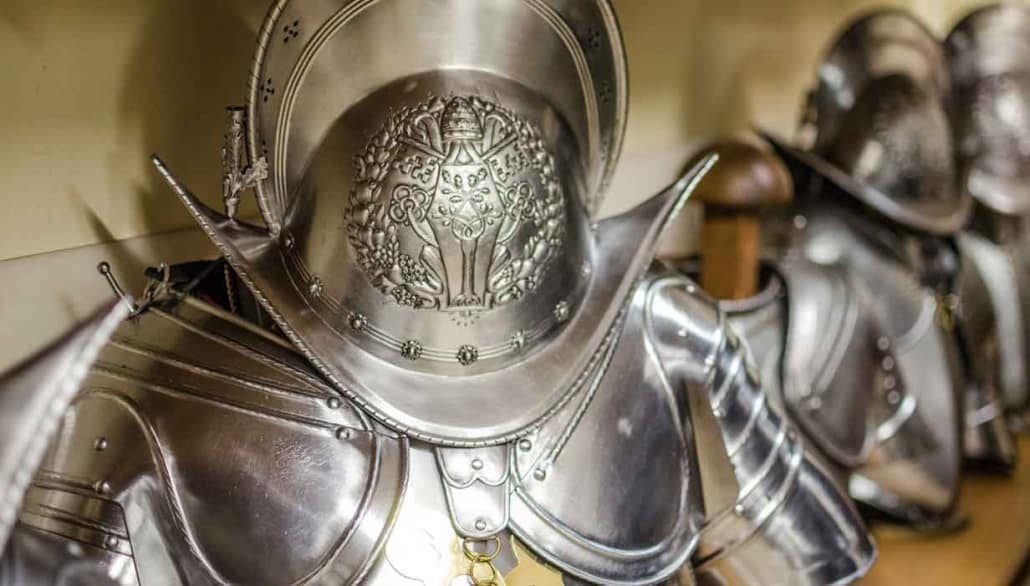 The Swiss Guard does have heavy duty armor, but generally carry the 16th-century basics.

As with the Queen’s Guard in London, the Swiss Guard’s daily function is, for the most part, ceremonial. Something reflected in both their uniform and choice of weapons. All soldiers carry a dress sword, each with an intricate handle that corresponds to the owner’s rank. Their principal weapon, however, is the halberd (also known as a “Swiss Voulge”), which is the equivalent of a spear with an axe near the tip.

Those with higher ranking are equipped with a partisan, a long-handled spear, and those above Corporal walk around unarmed or simply carry a command baton. That said, in keeping with their times, their arsenal has been updated to include Glocks (semi-automatic pistols) and AK-47s (sub-machine guns), although these tend to be kept from public view.

How long do the Swiss Guards serve for? 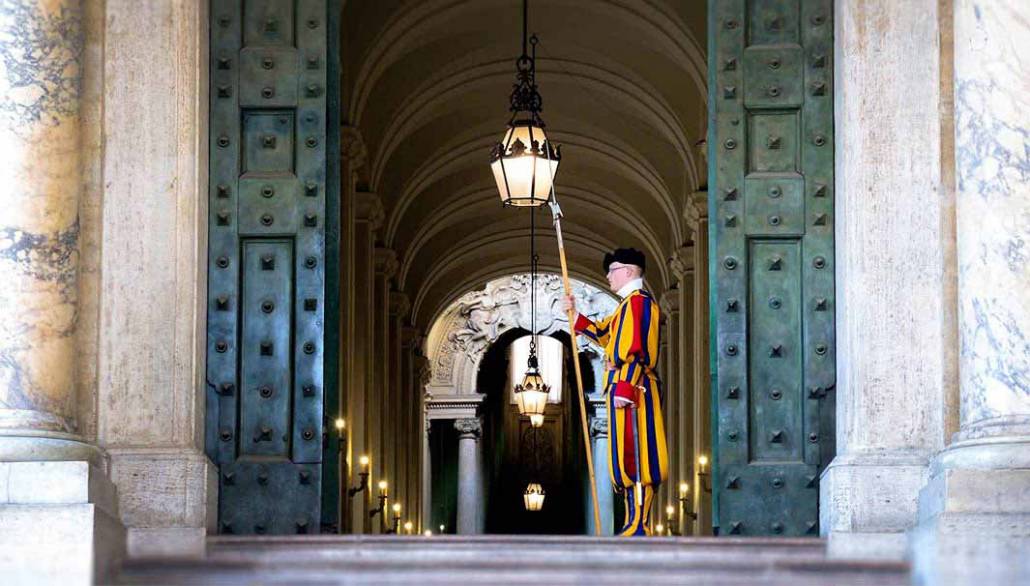 The Swiss Guard is a big commitment, but not for life!

All Swiss Guards sign a mandatory 2-year contract of service to the pope, although this can be extended upon request. Each guard receives a monthly salary, excluding overtime and accommodation (which is provided by the Vatican). As these men all come from religious Catholic families, they tend to consider their service to the pope as a great honor rather than a for-profit profession.

See the Swiss Guard for yourself!

While the Swiss Guard is stationed at several different locations around the Vatican, you’re guaranteed to get an up-close look and perfect photo opportunities on our Vatican Tours. There are two ceremonial posts as you enter and exit St. Peter’s Basilica. At the Portone di Bronzo (you can ask them for free Papal Audience tickets here) just after the security check, and again under the Arco delle Campane as you make your way down the steps into St. Peter’s Square. At Porta Sant’Anna, at the end of Borgo Pio, you will see them in their dark blue uniforms.