Home > Blog > The Raphael Rooms at the Vatican

The Raphael Rooms at the Vatican 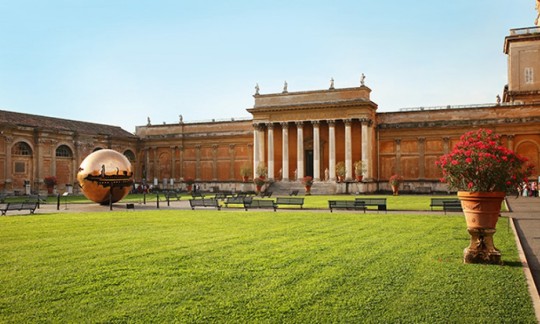 Raphael, a leading artistic figure of the Italian High Renaissance was commissioned to paint the amazing frescoes that decorate the four Raphael Rooms in the Vatican. These rooms painted by Raphael and his students between 1508 and 1524 can be found in an area of the papal apartments open to the public. Officially the residence of Julius II della Rovere, the four rooms are: the Hall of Constantine (Sala di Costantino), the Room of Heliodorus (Stanza di Eliodoro), the Room of the Signatura (Stanza della Segnatura) and the Room of the Fire in the Borgo (Stanza dell’Incendio del Borgo). 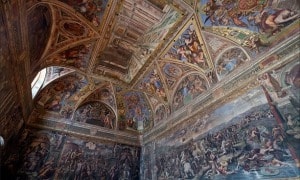 Created to host receptions and important ceremonies, this room was named after Constantine (306-337 A.D.), the first Christian Roman emperor who recognized the Christian faith. The walls which were decorated in 1517 were the work of Raphael’s pupils but were based on Raphael’s drawings. The paintings depicted four key moments of Constantine’s life: the Vision of the Cross, the Battle of Constantine against Maxentius, the Donation of Rome and the Baptism of Constantine. 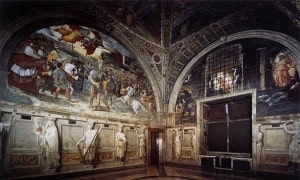 Decorated between 1512 and 1514 the room was originally designed for the Pope’s audience. Raphael chose a political theme for the frescoes, documenting various historical events ranging from the Old Testament to medieval history. Events from the Old Testament are featured on the ceiling. Elsewhere in the room, you will see works of art by Luca Signorelli, Bramantino, Lorenzo Lotto and Cesare da Sesto.

Room of the Signatura

Room of the Signatura

Raphael’s most famous frescoes, painted between 1508 and 1511, are on display in the Room of the Signatura, which marked the start of the high Renaissance. Julius II (who was pontiff from 1503 to 1513) used the room as a study and his private office. The designs reflect the pope’s library collection depicting themes of theology, jurisprudence, philosophy, and the poetic arts, representing categories of the human spirit: Truth, Good and Beauty. The original furnishings were lost during the Sack of Rome on 6 May 1527, however, they were replaced with wooden works by Fra Giovanni da Verona.

The Fire in the Borgo 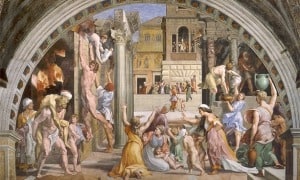 The Fire in the Borgo

Raphael was tasked with creating frescoes for the walls of this room during the time when Leo X was pontiff (1513-1521). Raphael and his students carried out the work, which was completed between 1514 and 1517. The designs represent the political aspirations of Leo X.  The scenes chosen by the students of Raffaello are: the Coronation of Charlemagne, The Oath of Leo III, The Fire in the Borgo and the Battle of Ostia. The Fire in the Borgo depicts a fire that broke out in the Borgo in Rome in 847.

If you would like to find out more about Raphael and the Raphael rooms, it is worth visiting the Vatican with an experienced tour guide who can show you these rooms that are steeped in so much history and give you the background to each of the incredible designs.