Home > Blog > The Pantheon: A Marvel of Ancient Rome

The Pantheon: A Marvel of Ancient Rome 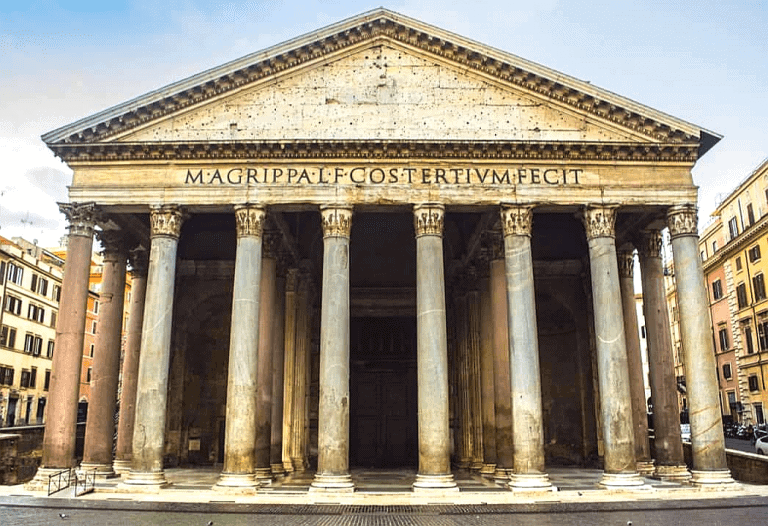 The Pantheon is an unwavering symbol of Rome and one of the most well-preserved Ancient Roman sites; there’s no wonder why it inspires so much curiosity and is a popular destination for over 6 million people every year. Though the structure has inspired many architectural emulations over the centuries, there is nothing like standing in this majestic relic. Here are some of the most impressive facts to give you an idea of the true magnificence behind it! 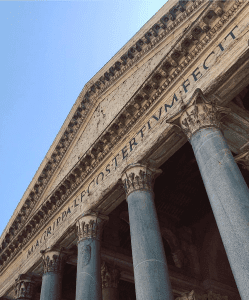 The Pantheon we see today is actually the 3rd version and, as they say, the third time’s a charm! Marcus Agrippa built the original in 27 BC – 14 AD, but everything except for the facade was destroyed by fire in 80 AD. Emperor Domitian built the second version, which was struck by lighting and burned down (again!) in 110 AD. Finally, Emperor Hadrian built the architectural marvel we see today in 113-125 AD – making the Pantheon nearly 2,000 years old!

Emperor Hadrian, one of the more humble Roman leaders, upheld Marcus Agrippa’s original facade which reads “M·AGRIPPA·L·F·COS·TERTIVM·FECIT”, translating to “Marcus Agrippa, son of Lucius, made [this building] when consul for the third time”.

The Pantheon was originally a Pagan Temple. In fact, the name “Pantheion” is Greek for “of all the Gods”. It wasn’t until 609 BC that Pope Boniface IV converted it into a Christian Church consecrated to St Mary and the Martyrs, which is still fully functioning today.

Its exterior was once widely covered in bronze. While its conversion and continual use as a Christian church saved it from being sourced for building material in the Medieval period, all of its bronze decoration was stripped from its exterior in the 17th century by Pope Urban VIII. Much of it was used for cannons and weaponry to fortify the Castel Sant’Angelo, but some of it was used by Gian Lorenzo Bernini to create his Baldachin masterpiece, which stands at the high altar in St Peter’s Cathedral. 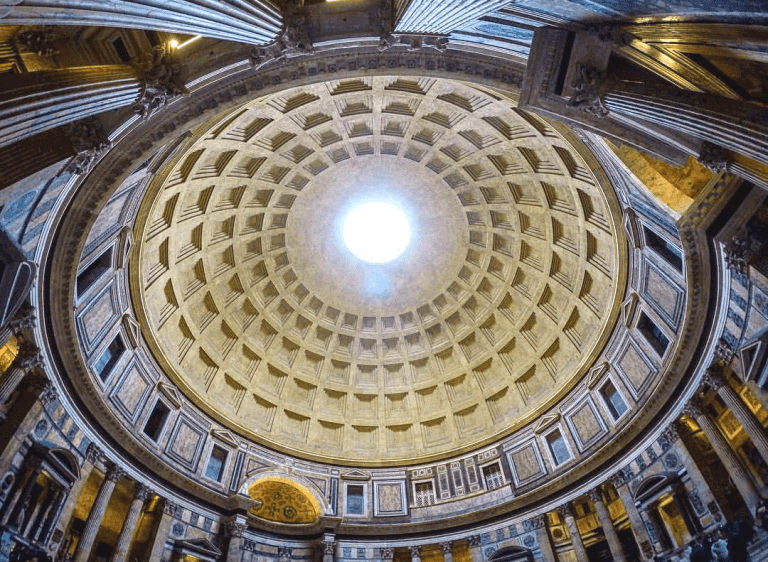 It boasts the largest unsupported dome in the world. The Ancient Romans had an undeniable talent for architecture. The coffered dome towers 43 meters above the ground and has an equal diameter. But how can it endure as it does without reinforcement? With a well-planned balancing act. The base of the dome, which is made of heavy travertine stone, is 21 feet thick. As it rises, lighter materials, such as tufa and brick are mixed into the equation as the walls itself gradually become thinner. At its highest point, a light pumice stone layer, 3.9 feet thick, surrounds the open oculus at its centre.

The oculus was left open to allow the dome to balance without caving in – a purpose which it has served very well! Some romantics, though, might tell you that the space would allow prayers to pass straight to the Gods or the Heavens. Regardless, it is the only source for natural light, as the structure has no windows. The sun shines in through the hole, creating a reverse sundial effect on the ceiling, as well as rain, which runs down the slightly concave floor into an ancient draining system.

The monolithic columns that support the portico of the Pantheon, which are 39 feet tall and weigh 60 tons each, were imported from Egypt.They were dragged 100 km from the eastern mountains of Egypt to the Nile River, on which they floated out to the Mediterranean Sea. From there they were transported by boat to the ancient Port of Ostia Antica, at the mouth of the Tiber River. They were pulled against the flow of the River to the historic centre, and finally dragged another 700 meters to the site. The entire transportation process is thought to have taken up to a year.

While the gigantic doors to the Pantheon are solid bronze, they are not the originals. The original Pantheon doors were made of solid bronze and covered in gold paint, but these 15th century remakes are actually slightly smaller and unpainted.

The corpses of important historical figures are housed in the Pantheon. While the tombs of artist Annibale Carracci and the two kings of Rome, Victor Emmanuel II and Umberto I, are certainly noteworthy, the tomb of Renaissance artist Raphael and his lover, Margarita Liti, gets the most attention here. The two were entombed together and placed in the Pantheon upon Raphael’s request. The inscription on his marble sarcophagus reads “Here lies that famous Raphael by whom Nature feared to be conquered while he lived, and when he was dying, feared herself to die.” Now, isn’t that beautiful?

Every year, thousands of rose petals are ceremoniously dropped into the Pantheon through its oculus, symbolising the Holy Spirit’s descent to Earth. The event takes place annually after the Mass for the Feast of the Pentecost. Details can be found on the Pantheon website. While the mass is public, entry is limited so it is wise to arrive very early and expect a long queue. 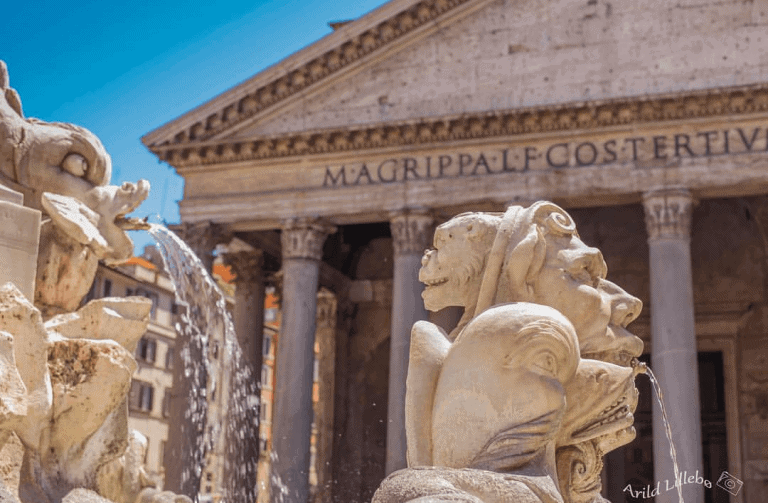 The Pantheon is included on many of our What a Life Tours! Check out our  Early Bird Walking Tour and the Rome Evening Stroll or get in touch with our team via info@whatalifetours.com or Live Chat and we’ll plan the perfect experience for you!