The History of St Peter’s Basilica 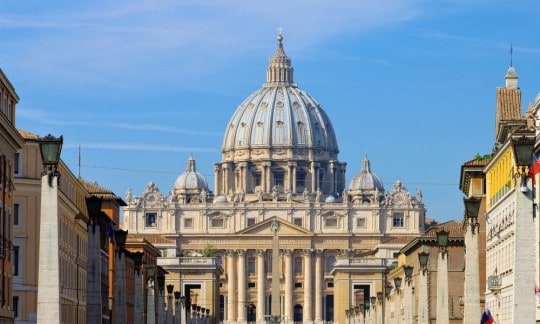 Hailed as one of the most famous churches in the world, St Peters Basilica attracts millions of visitors each year. What many people do not know is that the basilica is also believed to be the burial site of Peter, a disciple of Jesus, with his tomb situated deep below the high altar.

After a ministry of thirty-four years, Peter traveled to Rome and met his martyrdom there in 64 AD, during the reign of the Roman Emperor Nero. According to legend, Peter was crucified head downwards, by his own request because he considered himself unworthy to die in the same manner as Jesus. The crucifixion took place near an ancient Egyptian obelisk in the Circus of Nero. The obelisk now stands in St. Peter’s Square and is revered as a “witness” to Peter’s death. It is one of several ancient Obelisks of Rome.

The construction of the current Basilica which you see today began in 1506 and was completed on the 18th Nov 1626. Construction of the original began by orders of the Roman Emperor Constantine I between 318 and 322, and took about 30 years to complete.

By the 15th century, the church that was originally standing on this site, was falling into ruin. And it was decided that a new and much grander Basilica would be built.

Since the crucifixion and burial of Saint Peter in 64 A.D., the spot was thought to be the location of the tomb of Saint Peter, where a small shrine was located. With its increasing prestige, the church became richly decorated with statues, furnishings and elaborate chandeliers, and side tombs and altars were continuously added.

The structure was filled with tombs and bodies of saints and popes. Bones continued to be found in the construction as late as February 1544.

The majority of these tombs were destroyed during the sixteenth and seventeenth centuries during the demolition of the old St. Peter’s Basilica. The remainder were transferred in part to the modern St. Peter’s Basilica, which stands on the site of the original basilica, and a handful of other churches of Rome.

What a Life Tours have provided extraordinary guided tours of Rome since 2009. They are the number 1 rated Vatican tours agency on Trip Advisor since 2011 and were recently awarded ‘Historical Tour of the Year 2019’  by the prestigious travel journal Luxury Travel Guide for their Colosseum Private tour. Find out more about their award-winning Rome tours.