The Best Panoramic Views in Rome 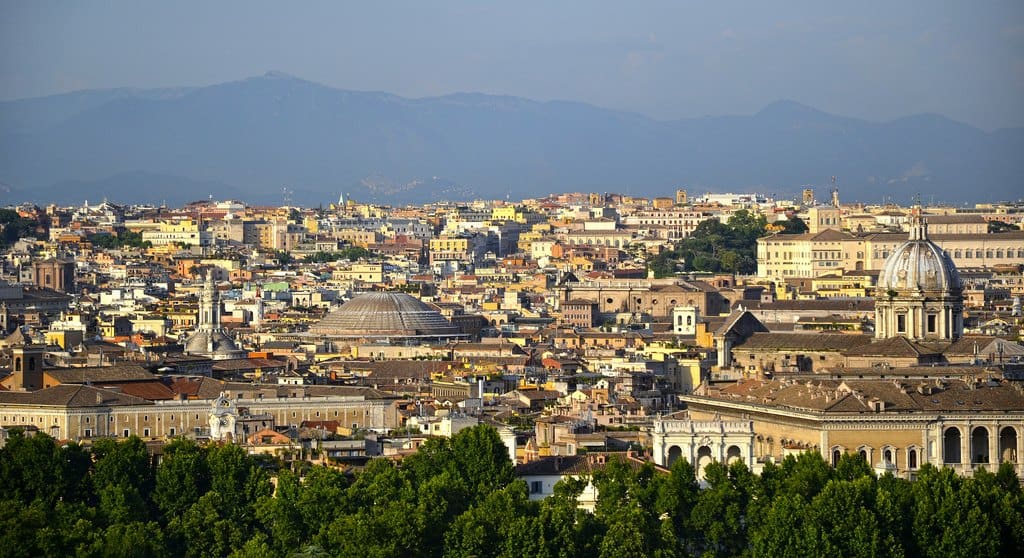 It can be difficult to find your way through Rome’s maze of tall Renaissance buildings and winding ancient roads to a place where you can can get a glimpse of the Eternal City from above. We’ve made a list of five of our favorite views throughout the city to point those looking for a new perspective of its timeless beauty from the right direction. Get your walking shoes on and get ready for a rewarding climb! 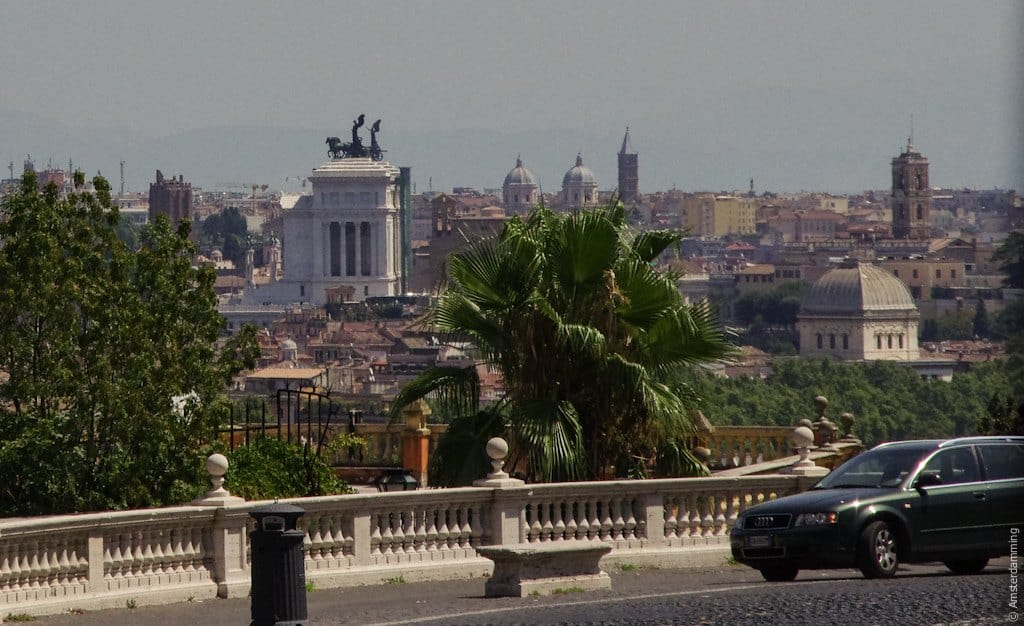 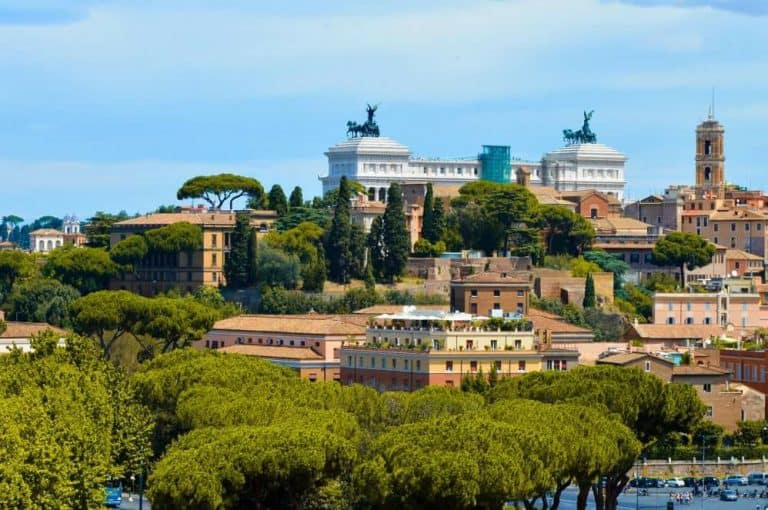 Located on Aventino, one of Rome’s famous seven hills, the Garden of Oranges is a nice quiet escape from the city’s chaos that boasts an incredible view. Appropriately named, the park is filled with orange trees and stands right above the Tiber River. From its terrace, you can look all the way across to the Vatican, as well as Capitoline Hill, Altare della Patria, and lower Trastevere. The park is built on top of both an ancient fortress and an even older castle, whose walls surround the garden to this day. If you go when it’s warm out, you’re likely to find live music enjoyed by locals and tourists alike. And when you leave, make sure not to take a quick detour to the Knights of Malta Keyhole just a bit further up the road- if you look through it, you will get a perfect view of St. Peter’s Basilica!

Climb the staircases to Pincian Hill terrace and look back down at Piazza del Popolo, the home of the second-oldest obelisk in Rome and Santa Maria del Popolo’s massive twin churches. The Pincio Terrace is located in the Pincio gardens, built by an elite family in the fourth century. The garden originally had a wall around it, separating it from the neighboring Villa Borghese, but today the two gardens are connected, and you can wander freely between them. The Pincio Terrace, located right at the edge of the gardens, overlooks Piazza del Popolo, across the Prati district, to the Vatican. When you’ve finished admiring, instead of walking down the crowded Via Del Corso you can continue down the road past Villa Medici to the Spanish Steps – the whole trek is accompanied with views of Rome’s beautiful rooftop terraces and you can even catch a far-off glimpse of the Roman forum!

The second tallest hill in the city, Gianicolo, looks out over central Rome. In ancient times, the hill was located outside of the city’s walls until the king Ancius Marcius built a bridge across the river to prevent potential enemies from inhabiting it. Today, the hill is home to four universities, botanical gardens, the Spanish Embassy, and the beautiful Fontana Dell’acqua Felice, which you can’t miss! Because it is one of the highest points in the Rome, the panoramic view stretches across many of the city’s major landmarks. Once you’ve finished drooling over the landscape below, take a closer look at the eighty-four busts of prominent Italians located along the perimeter, and the massive statue of Giuseppe Garibaldi, a famous Italian politician and general. From the lookout you can walk down the winding roads and staircases to Trastevere, a funky medieval neighborhood located at the base of the hill, for a snack or aperitivo. 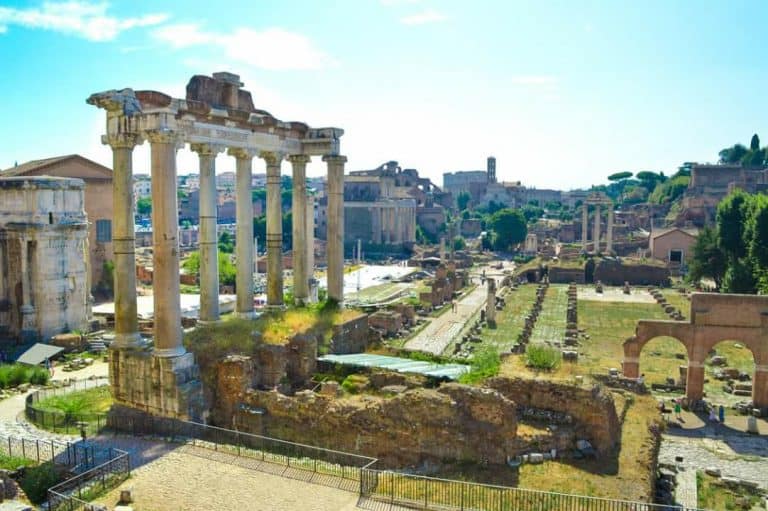 Capitoline Hill, one of Rome’s most famous hills and home to the Capitoline Museums, offers a unique and breathtaking view of the Roman Forum. Climb up Michelangelo’s Cordonata stairs, through his Campidoglio square, and down to the backside of the Forum. There you can get a detailed view of the Forum’s majestic relics and ruins, scattered all the way to Palatine Hill and the Colosseum! Capitoline has been the home to several important temples, including the Temple of Jupiter. It has also been the site of several significant historical events, including the site where Tarpeia let the Sabines into the walls of ancient Rome, before being thrown off a nearby cliff as punishment. Capitoline Hill is  thought to have inspired the name for Capitol Hill in Washington, D.C. If you climb the steep stairs next to the Cordata up to the Santa Maria in Aracoeli, a church built in the 6th century, you can also get a great view of the city’s busy streets and beautiful rooftops. 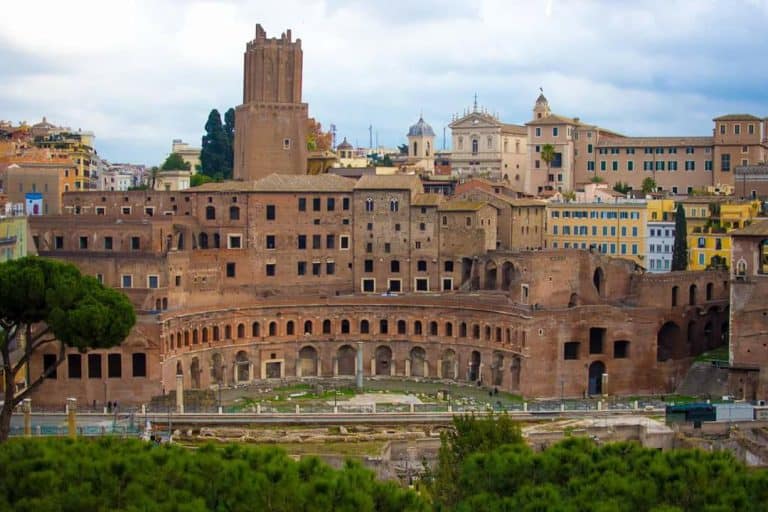 Without a doubt one of the largest and most noticeable buildings in Rome, the Altare della Patria (also known as the Victor Emmanuel monument) is almost impossible not to see when exploring the city. Built in 1911 as a monument to Victor Emmanuel, the first king of Italy, the building is filled with Roman architecture, including Corinthian columns, arches, and on the roof, two statues of the goddess Victoria. Right underneath the goddesses is a 360-degree view of Rome. From there you will be able to see most of many of the city’s most famous landmarks, including the Forum, Colosseum, St. Peter’s Basilica, the Spanish Steps, and Piazza del Popolo. On your climb up the stairs to the elevator that takes you to the top, make sure to stop and admire the monument’s white marble statues and Ancient Rome-inspired paintings, and even take a step out onto one of the terraces overlooking Piazza Venezia. When you make it up to the roof, be prepared to have your jaw drop – Rome’s sprawling landscape of massive architectural feats will leave you hard pressed to come up with a more beautiful city.

Finally, you can’t miss the view from St. Peter’s Cupola. Designed by Michelangelo, the dome dedicated to St. Peter is the tallest in the world. You can either take the elevator up, or if you’re in the mood for some exercise and enjoy heights, climb up the 551 steps to the breathtaking 360-degree view of Rome. You’ll be able to see St. Peter’s square, the hidden Vatican City, and all the way in to Rome’s centre.