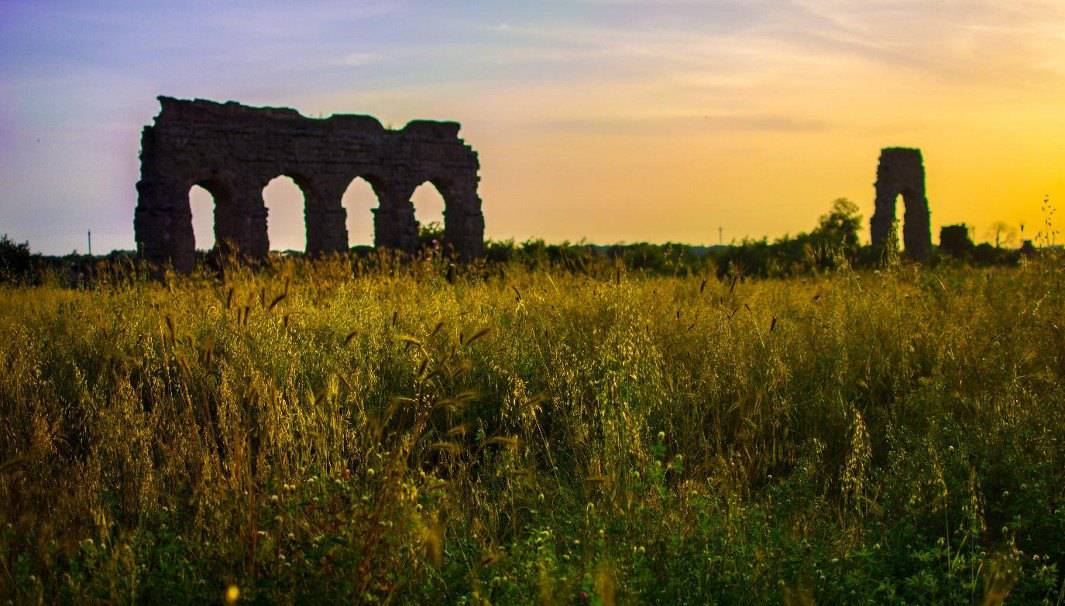 While Rome is known around the world as a virtual outdoor museum – complete with magnificent ancient relics, stunning palazzos, gorgeous fountains, and picturesque piazzas – the city boasts beautiful green areas, too. In fact, in some cases lush gardens and ancient artefacts collide spectacularly! And this is exactly the case in the picture perfect “Parco degli Acquedotti”.

As the name suggests, the 15-hectare rustic area along the famous Appian Way is home to a seemingly endless stretch of Roman Aqueducts. As the destination is only about 8 km from the historic centre, free to visit, and easily reached by public transport, it’s a wonder why more tourists don’t make their way here! We’re not complaining, though – it’s a tremendously tranquil escape, and we like it that way. 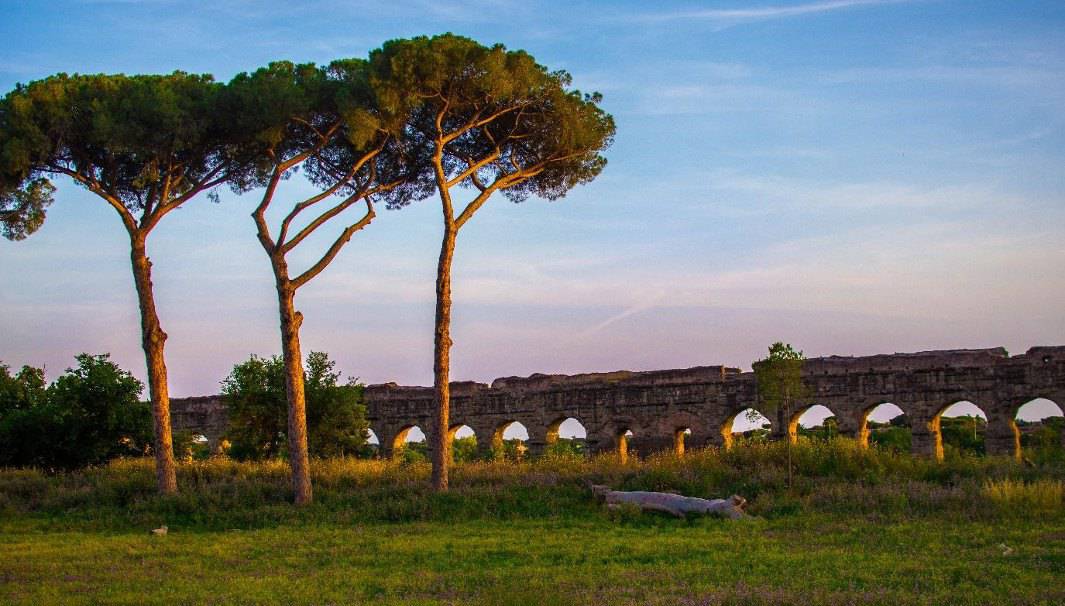 What is an aqueduct? It is essentially a manmade channel that carries water long over long distances and, in the case of the Roman originals, did this by using the force of gravity alone. They were made with “pozzolana”, an ancient mortar that could even set under water! These megalithic structures, which were way ahead of their time, serve as an unwavering testament to the advanced engineering and innovative architectural methods of the Ancient Romans.

Though the remains of several aqueducts can be spotted here, the most obvious spectacles are the Acqua Claudia and the Acqua Felice. The Acqua Felice, the smaller of the two, was completed during the Renaissance in 1856, while the Acqua Claudia, which reaches up to 90 feet high at some points, dates all the way back to 52 AD. Upon its completion, the Acqua Claudia stretched for over 40 miles into the mountains, decreasing in altitude by a precise 1 foot per 300 feet in length – providing an endless flow of fresh drinking water to the citizens of Rome. In fact, these water-bearing marvels used to run directly into famous public fountains, including the Trevi and Bernini’s “Fountain of Four Rivers” in Piazza Navona. 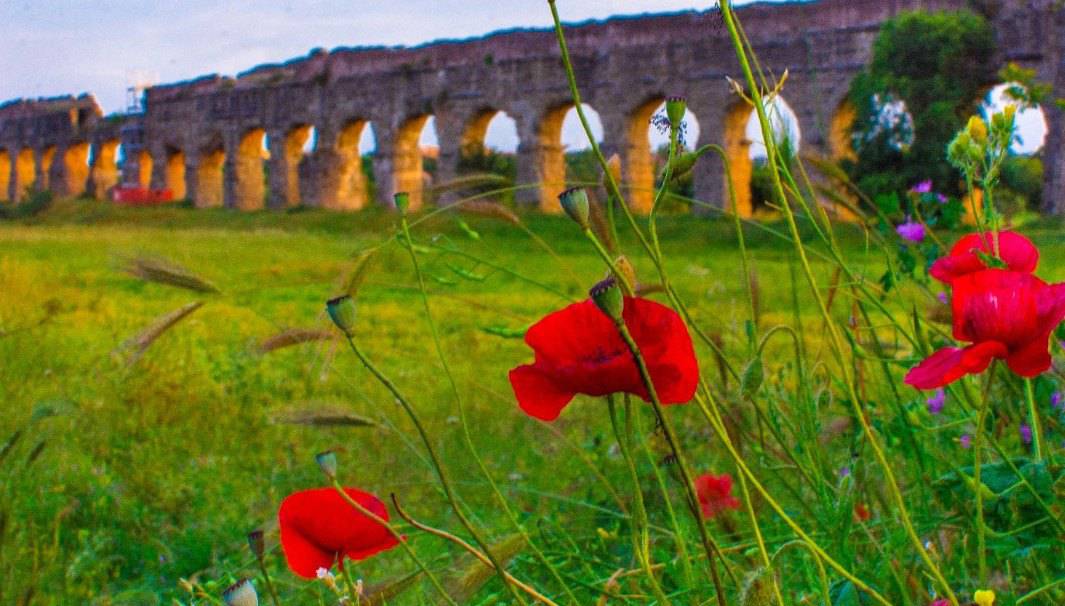 What can you do there? Apart from gazing in endless amazement? Lots of things! As any other park, there are dirt trails for walking, running, and cycling – but here you can also get up close and personal with the aqueducts! Weave in and out of their arches and even touch them, and then consider setting up for a picnic! Explore the various crops that are grown on the grounds; plant species and fresh fruit trees are often marked with labels. In some parts of the park, you might even find sheep grazing freely.

The southern end of the park neighbours Cinecittá – Italy’s version of “Hollywood” where you might find a crew working on a new film. If you’re interested in admiring the park on the silver screen, the opening scene from “La Dolce Vita” is a classic – as a helicopter carries a dangling sculpture of Jesus along the Acqua Claudia. If you’re interested in something more modern, check out “La Grande Bellezza” in which performance artist Marina Abramovic runs head first into the structure (ouch!). 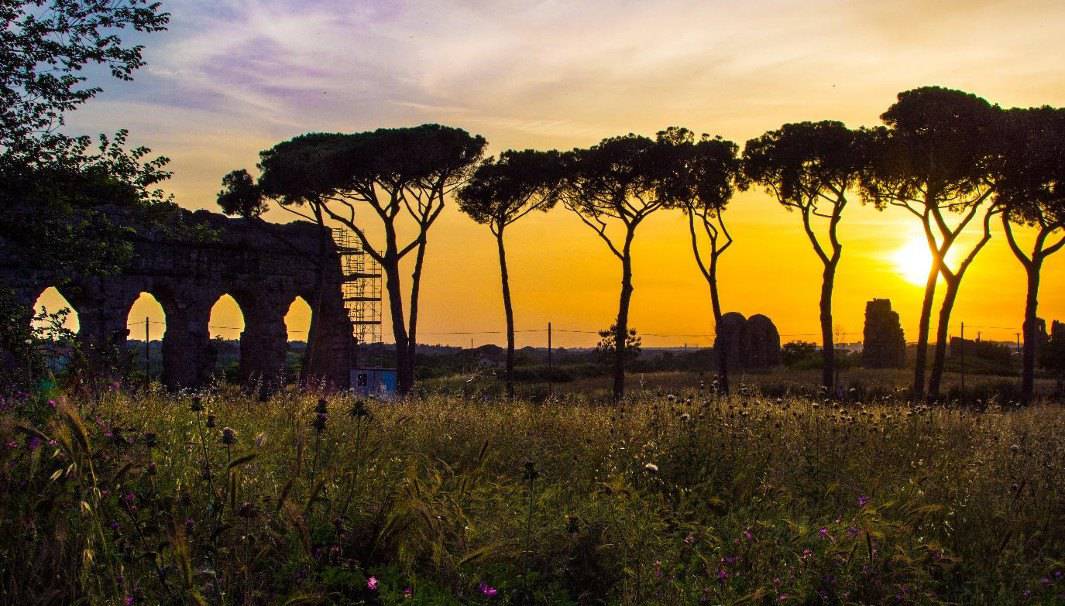 How to get there:

Take Metro A Line to Lucio Sestio or Giulio Agricola and walk a few blocks to the park.

We recommend visiting at sunrise or sunset, as the umbrella pines don’t offer much shade from the sun and, at this time, the shadows on the aqueducts are extra spectacular!

In May and June, the fields are usually filled with red poppy flowers! Swoon!