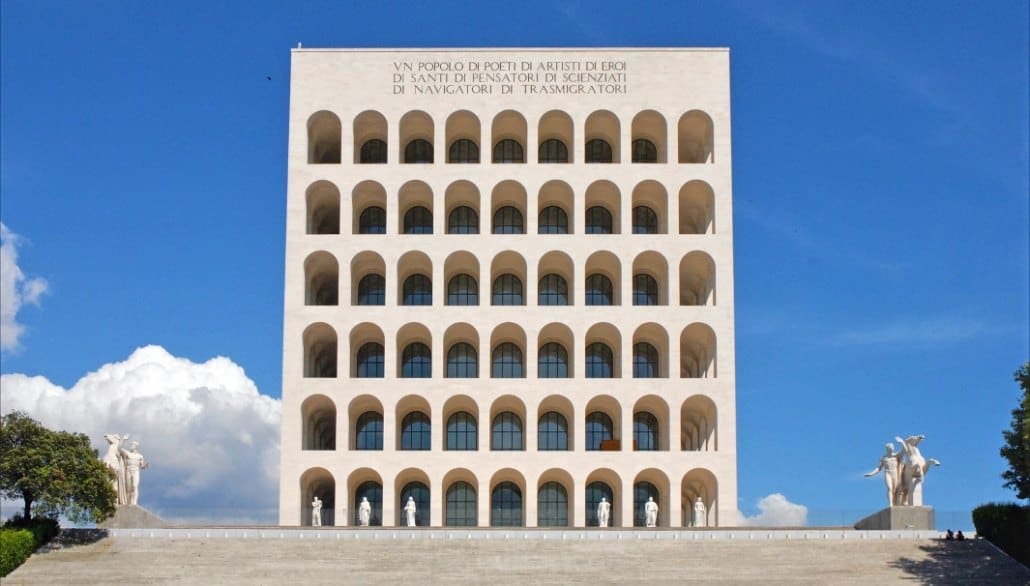 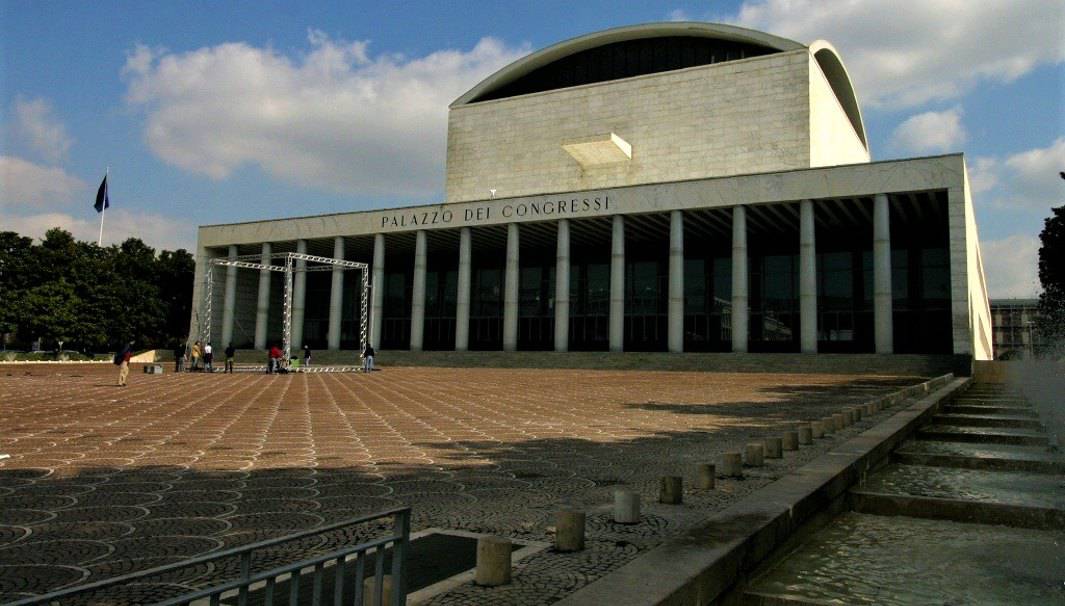 Eur, undoubtedly Rome’s most modern looking neighbourhood, lies to the south of the city centre. You may notice a certain symmetry to the streets and the structures, this is because EUR was carefully designed and constructed in the 1930s by Mussolini himself. He followed the ideals of Roman Imperial town planning and insisted all the buildings be constructed of limestone, tuff and marble which were the traditional building materials used in the Roman Empire.

The letters, EUR, stand for Esposizione Universale Roma (World Fair Rome). In fact, the area was chosen as the site for the 1942 World Fair, in which Mussolini planned to celebrate 20 years of Fascism. Mussolini’s dream was never fully realised as World War 11 stopped the World Fair from happening.

Though EUR was severely damaged during the war, its potential was not lost on the Roman government. They decided it was the perfect place for another business district, and in the 1950s and 1960s any unfinished Fascist-era buildings were completed and new contemporary buildings and large parks were added to complete the neighbourhood. Today, it is home to many government buildings, offices and residents.

The Palace of Italian Civilization 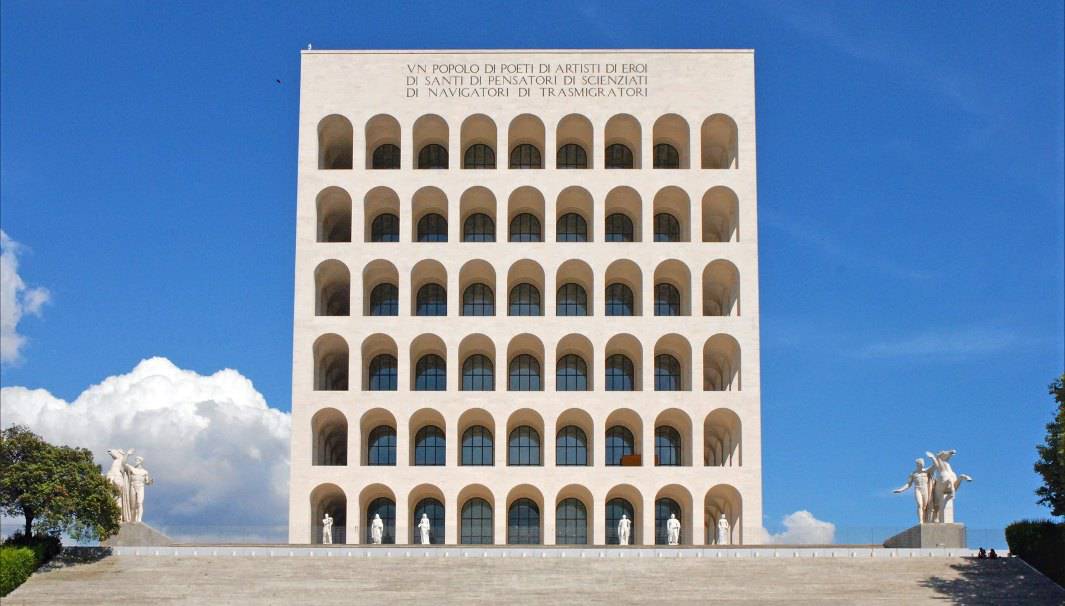 This impressive structure, more commonly known as The Square Colosseum, is a perfect example of Fascist Architecture. Mussolini greatly admired the architecture of the Roman Empire and wanted to honor the Colosseum. It was named so because it was originally intended to host the Exhibition of Roman Civilisation in the 1942 World Fair. The facade of the building displays six rows of nine arches, which should represent Mussolini’s full name Benito (six letters) and Mussolini (nine letters). The building stood empty and underutilized for a good part of 70 years, but since 2015 it has been the headquarters for the fashion label, Fendi.

The Monastery of the Three Fountains 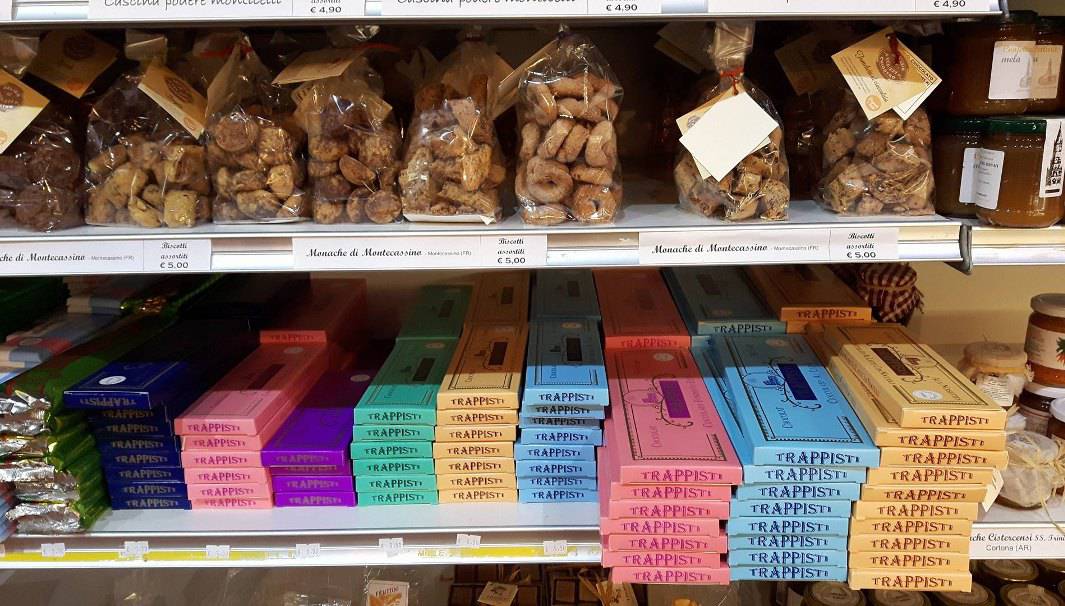 Chocolate and other items handcrafted by the Monks at the monastery. https://www.facebook.com/CioccolatoTrappisti

This monastery (Monastery of the Saints Vincenzo and Anastasio) and church complex (St Paul at the Three Fountains) is just outside the heart of EUR, in the place that the Apostle Paul was martyred in 67 AD. According to legend, when Paul was decapitated, his head bounced three times, creating a fountain of water each time it touched the ground. You can visit the church to witness firsthand the exact spots where St Paul’s head bounced, and the museum attached to the monastery. Today, the monastery is still functional and even has a shop which specializes in chocolate, beer, and olive oil which are made on-site by the monks!

The Obelisk of Marconi 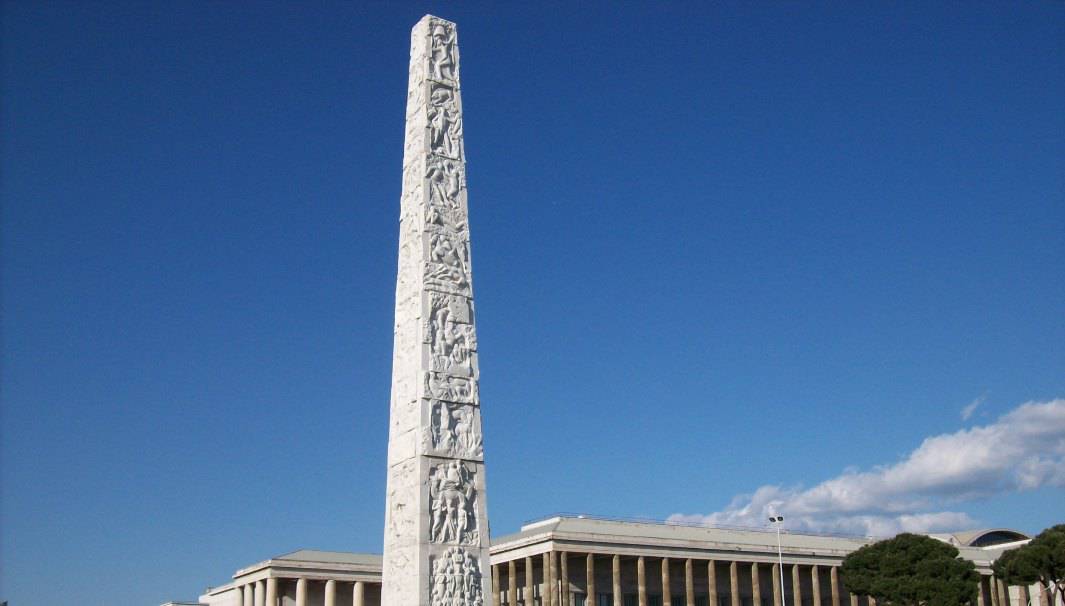 It may come as a surprise that Rome is a city of many Obelisks. In fact, there are many ancient Egyptian and Roman Obelisks scattered over the city, together with some modern ones. The Obelisk of Marconi, sitting in the middle of a busy roundabout in Eur, is modern. This 45 meter high structure was built in 1959 for the 1960 Summer Olympics and is dedicated to Italian inventor and engineer, Guglielmo Marconi.

the National Museum of Prehistory and Ethnography 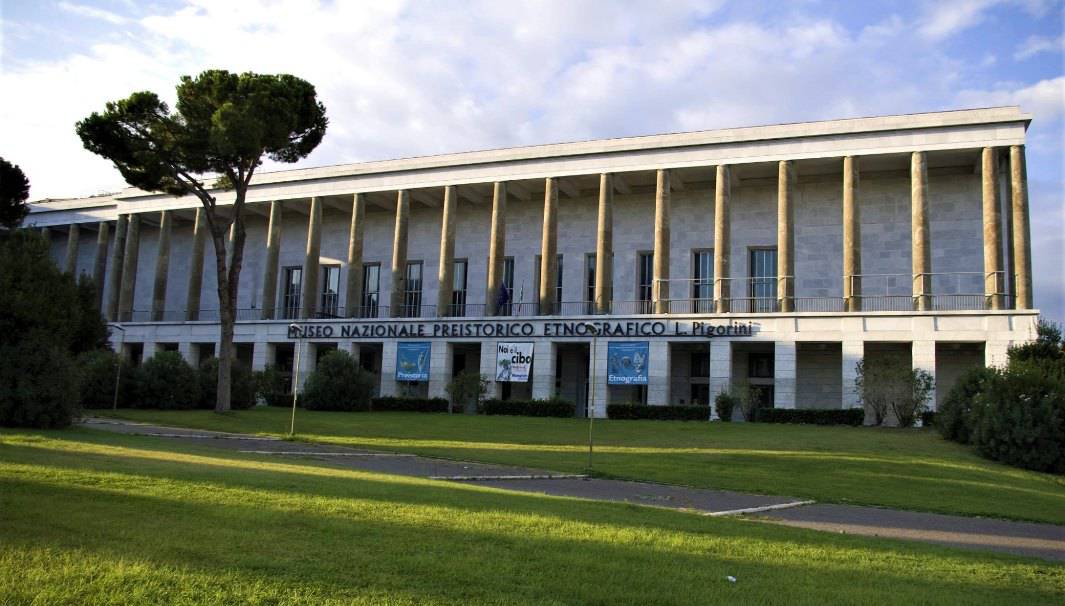 This museum houses a collection of ethno-anthropological and paleontological artifacts. Luigi Pigorini, its founder, intended not only to house the remains of Italian prehistoric culture but those hailing from other continents and cultures, including Africa, Asia, and America. Therefore, the museum offers a rare glimpse into a much older Italian and World history, often overlooked by visitors to Rome.

The Museum of Folk Art and Traditions 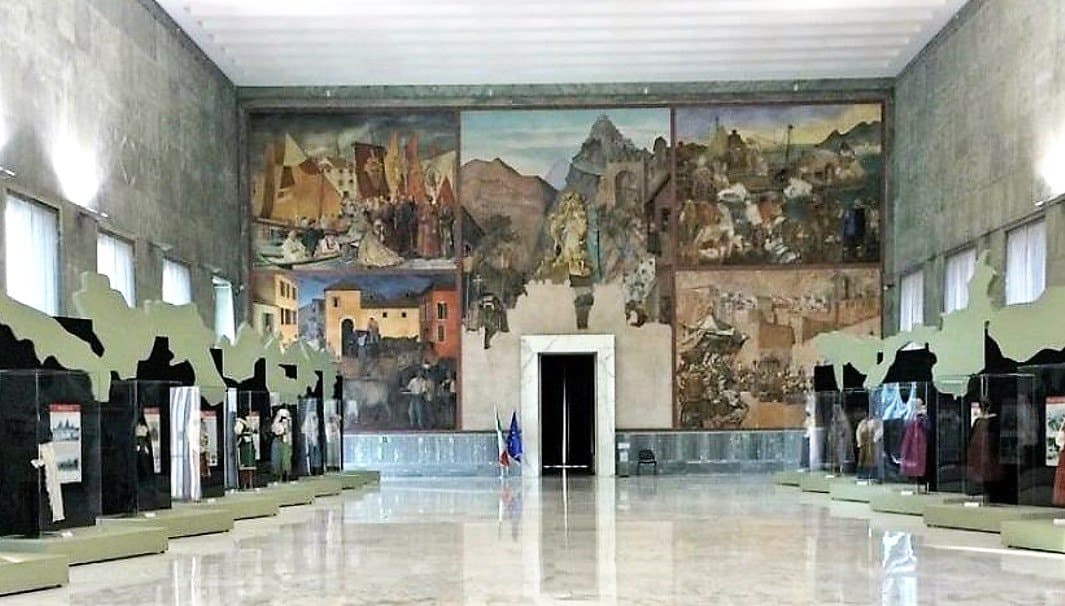 This museum showcases a side of Italy’s heritage that is rarely displayed or discussed; folklore and culture. Here you’ll find an eclectic range of exhibits ranging from agricultural and industrial tools, costumes, ceramics, domestic tools, art, boats, and vehicles from the 16th -20th centuries.

The National Museum of the Middle Ages 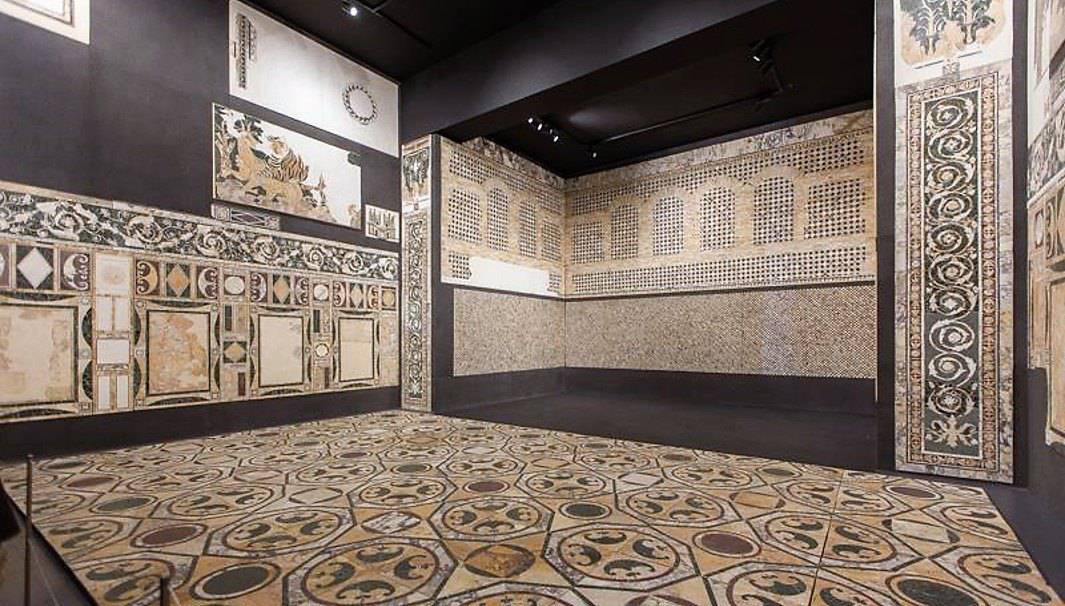 The opus sectile of Porta Marina, displayed in the National Museum of the Middle Ages, EUR. https://www.facebook.com/museomame

Another rarely frequented but worthy museum in EUR is the National Museum of the Middle Ages which houses Italian metal, stone, and glass treasures from the 4th century – 11th century AD. 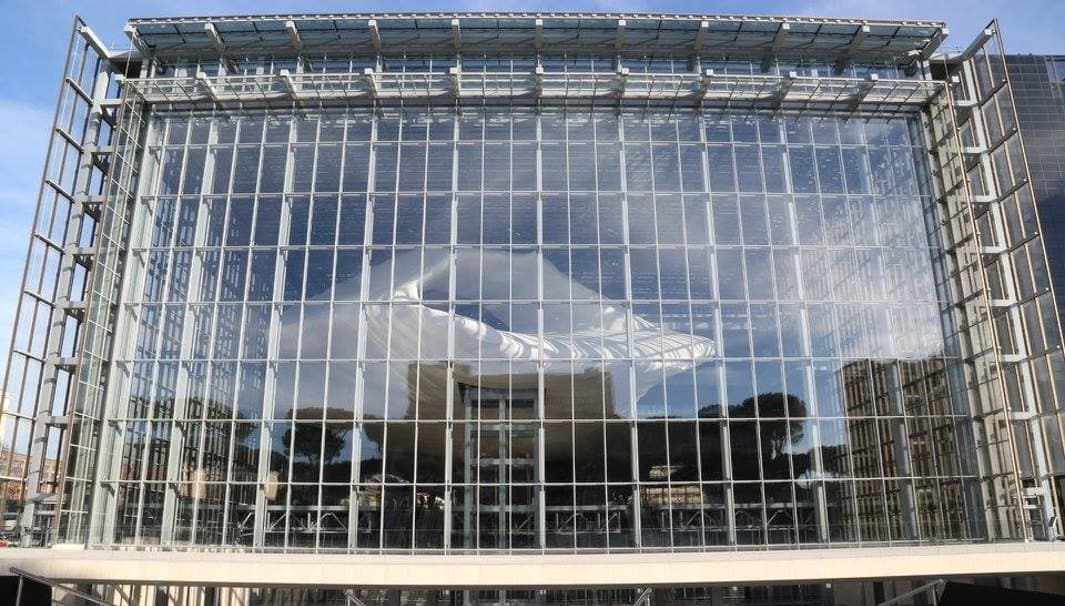 Not your run-of-the-mill convention center, this unique building is also referred to as The Cloud for its unusual architectural design. Inside the massive glass and steel structure, floats a white cloud designed by Massimiliano Fuksas. It’s a fully functional space too! Don’t believe it? Take a look for yourself, or visit the website for more information.

The Basilica of Saint Peter and Saint Paul 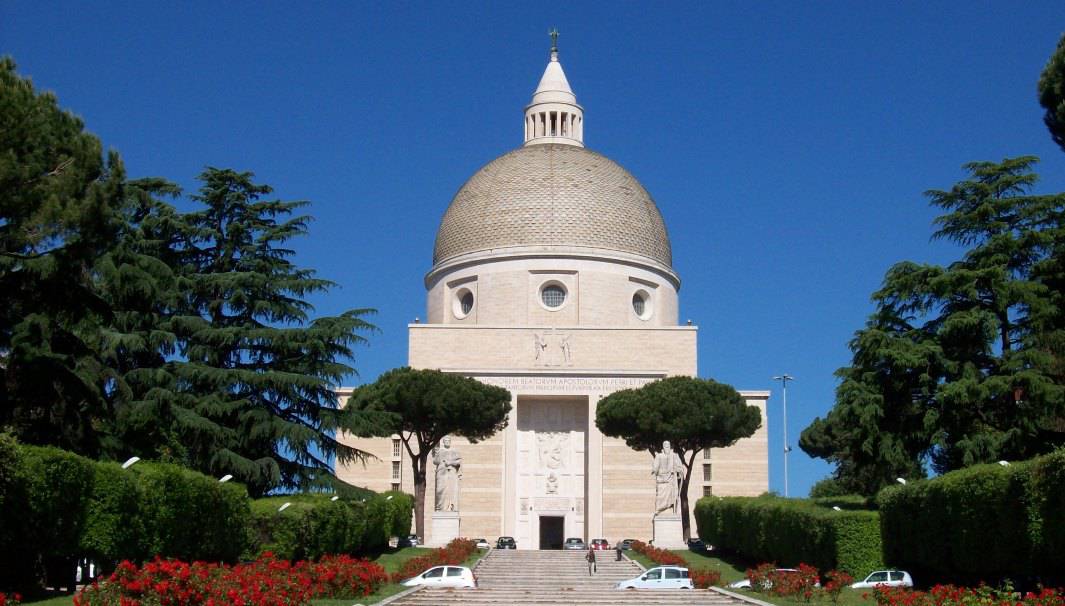 The Basilica of Saint Peter and Saint Paul. https://www.flickr.com/photos/sergio_the_blackcat/6493930729

Work on this church began during the preparations for the World Fair in the 1930s, however, due to the war it was only completed in the 1950s. It is purposefully located at the highest point in EUR, and its patron saints, Peter and Paul, loom large in statue form at the base of the grand staircase that leads up to the entrance. Rumour has it that Mussolini wished to make this church his mausoleum after the World Fair. 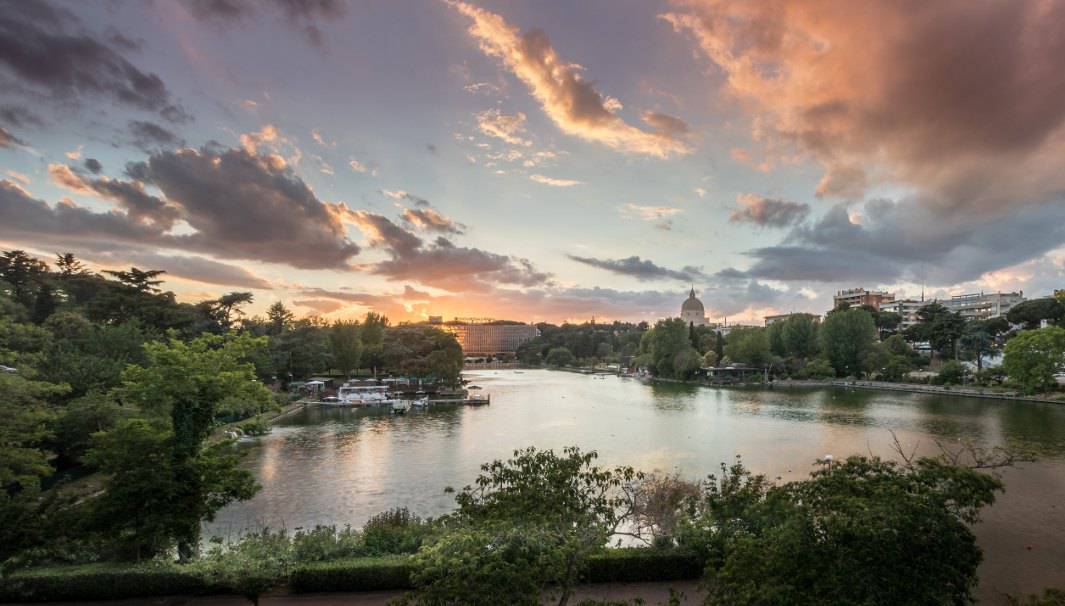 If you need a break from all the marble, take a walk around the EUR lake and its surrounding gardens. These gardens are home to hundreds of cherry trees which were donated by the city of Tokyo as well as a special waterfall garden.

Where to Eat and Drink 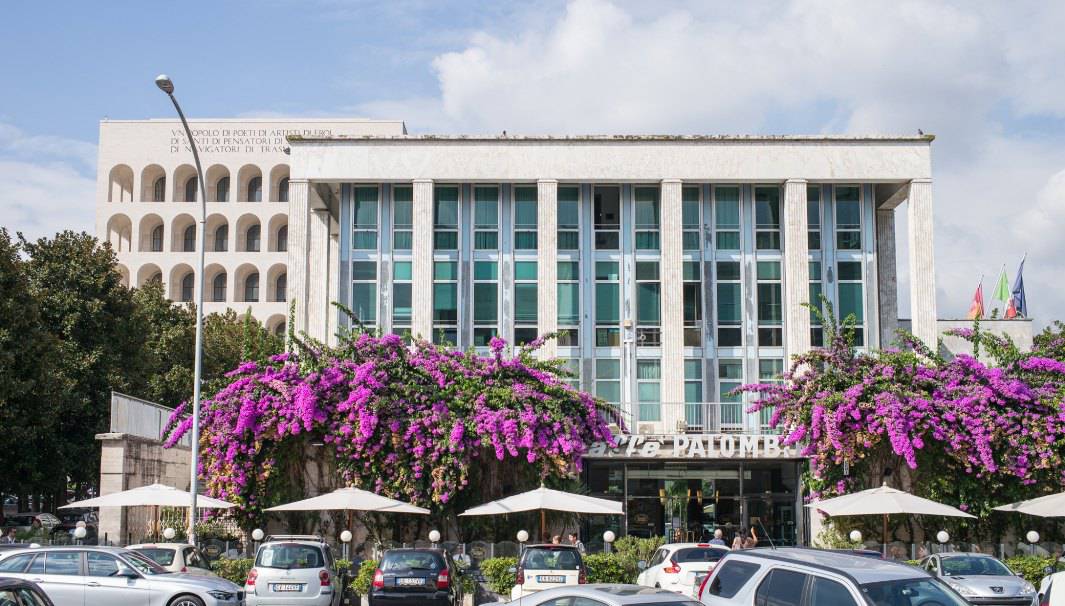 In the shadow of the square colosseum lies this historic bar, a favorite among locals. With a beautiful outdoor terrace always alive with activity, colorful bougainvillea plants growing tall on either side, as well as a spacious indoor area, Palombini makes the perfect stop. A cafe and bakery rolled into one, you might have a hard time deciding with delectable treat you’ll choose. 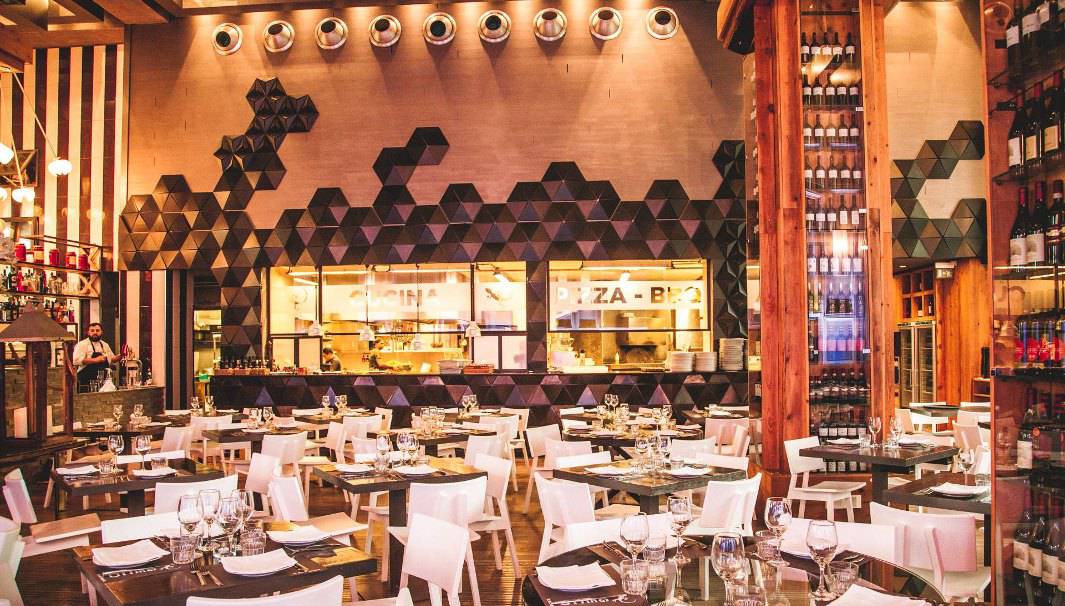 An elegant restaurant serving high-quality, local, seasonal food complete with a great atmosphere. Geco is open for both lunch and dinner, and while prices run a little on the high side, you pay for the quality and presentation of the food, and the impeccable service. 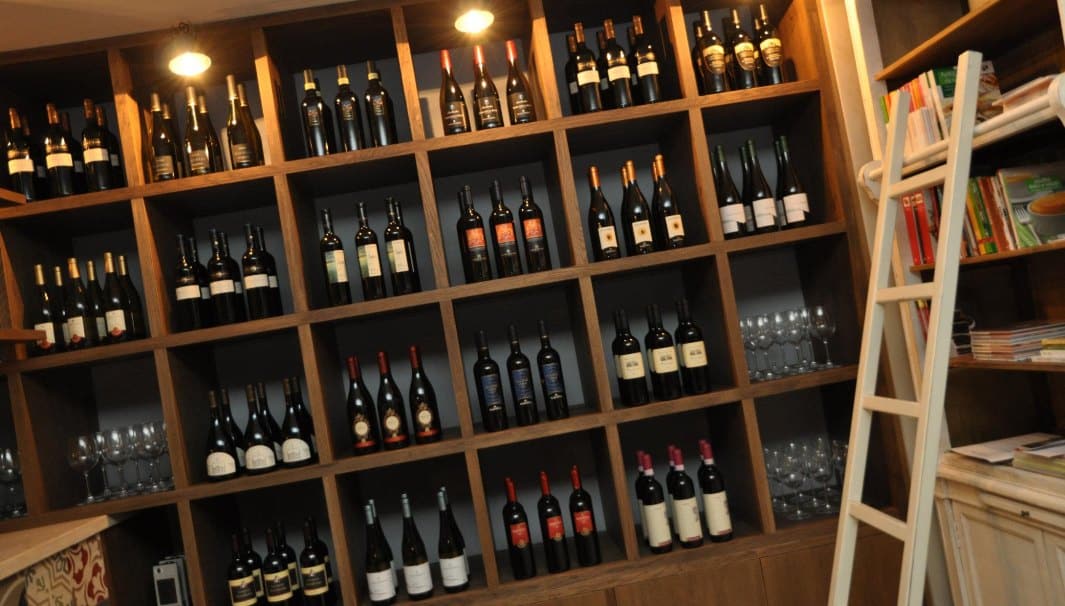 This sleek restaurant specializes in both traditional Roman dishes as well as Mediterranean flavors in general. If you stop for lunch during the week you’ll find it packed with the business crowd. The menu is extensive and servings are generous. There is also live music most evenings. 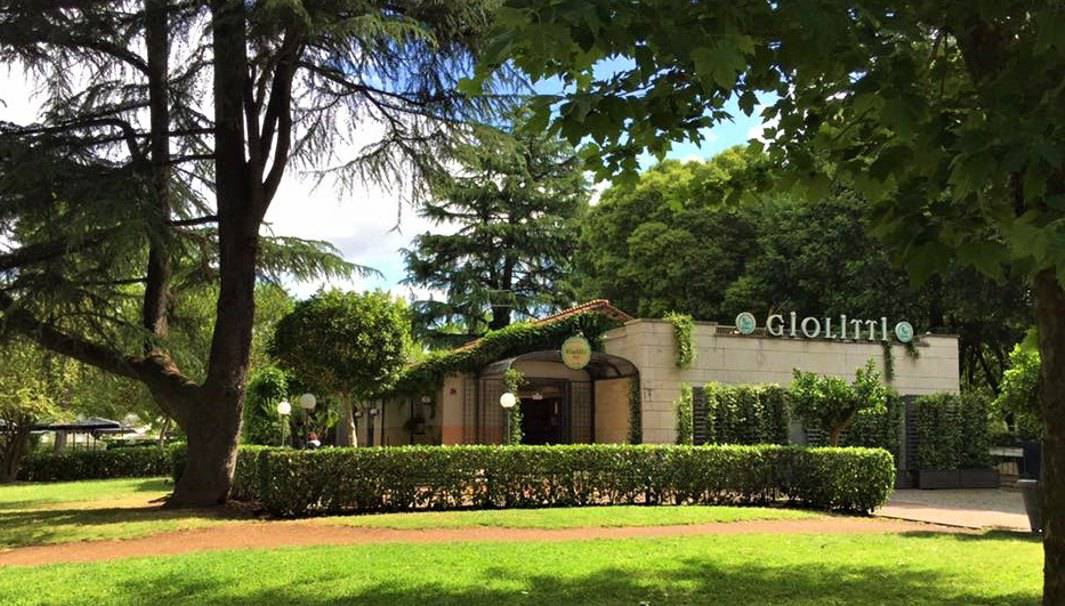 Gelato lovers, rejoice! The famous and historic Giolitti gelato, most well known for its location in the center of Rome near the Pantheon, has ONE other location in Rome. Where? In EUR! Right on Eur lake in fact. So, instead of battling the crowds in the center this summer, head to EUR and enjoy your gelato while taking a leisurely stroll around the lake.

We hope you found this neighborhood guide helpful! Have you visited EUR yet? For a specialized private tour of EUR or any part of Rome, contact us!