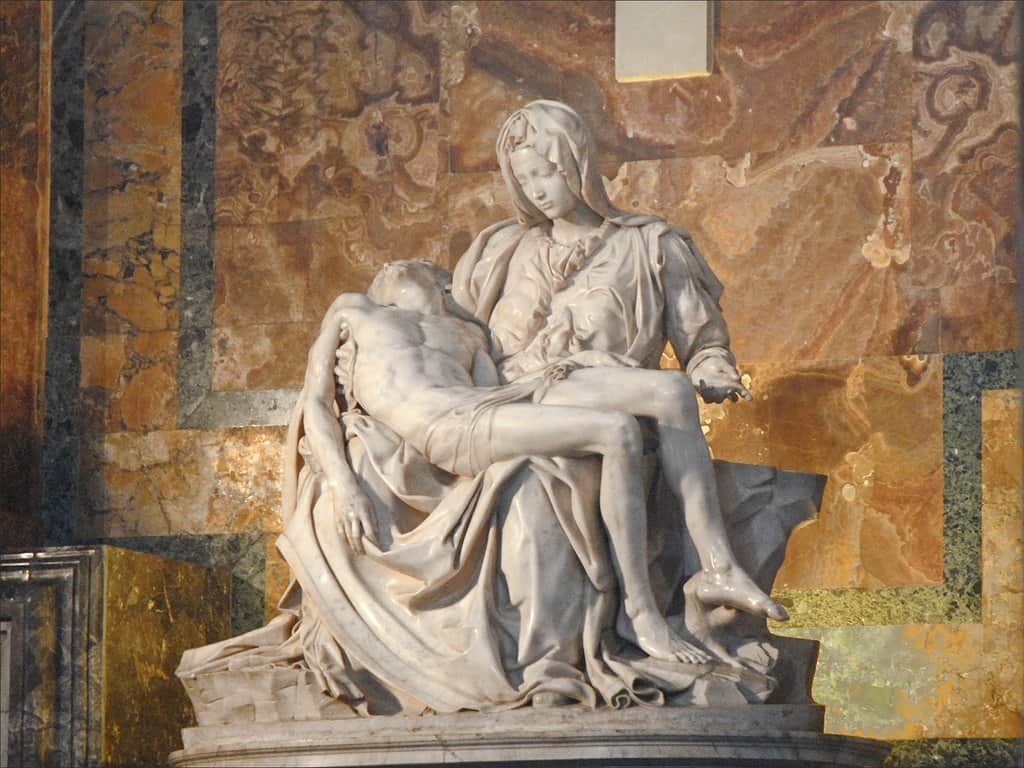 Rome has earned quite the reputation for its stunning monuments, dazzling fountains, and remarkable art collections, but visitors simply can’t make their way through the Eternal City without stopping into some churches! Elegant facades lure you towards grand doorways, welcoming guests into some of the most beautiful churches in the world. As Rome surrounds Vatican City, the center of the Catholic world, it is home to a large Catholic population. There are over 900 churches in the city, which are sure to impress followers of religion and art alike. As a matter of fact, these churches boast world-renowned masterpieces by some of the greatest artists in history, including Michelangelo, Bernini, Caravaggio, and Raphael! And the best part – they’re all free to visit!

While St Peter’s is well-known as the shining gem in Rome’s skyline and as the only Papal Major Basilica located within Vatican City, it also boasts some grand artistic contributions from great Italian artists. Michelangelodesigned the cupola, or dome, of the church, which houses his iconic sculpture of “La Pietà“. Bernini built the bronze Baldachin which marks St Peter’s grave, but he also designed the symbolic layout for St Peter’s Square, including the arrangement of the colonnades. 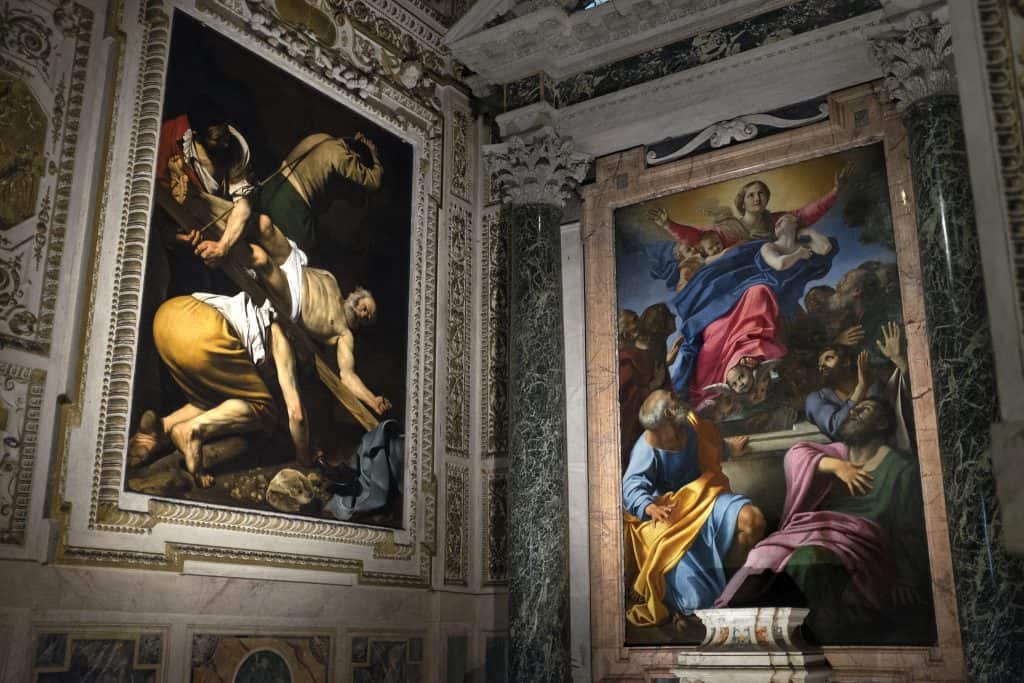 In the very center of Rome, Piazza del Popolo is home to the titular church and minor basilica of Santa Maria del Popolo, which is run by the Augustinian Order. While the Renaissance structure can be dated back to at least the 13th century, its origins are very mysterious. Some highlights of its interior are Caravaggio’s brilliant 1600 rendition of the “Crucifixion of St Peter” and his 1601 “Conversion on the Way to Damascus”, which hang on either side of Caracci’s 1601 “Assumption of the Virgin”. Bernini was responsible for the Baroque modernization of the church in the 1600s, while artistic contributions by Raphael, Bramante, and Pinturicchio can also be found inside.

Church of St Peter in Chains (San Pietro in Vincoli) 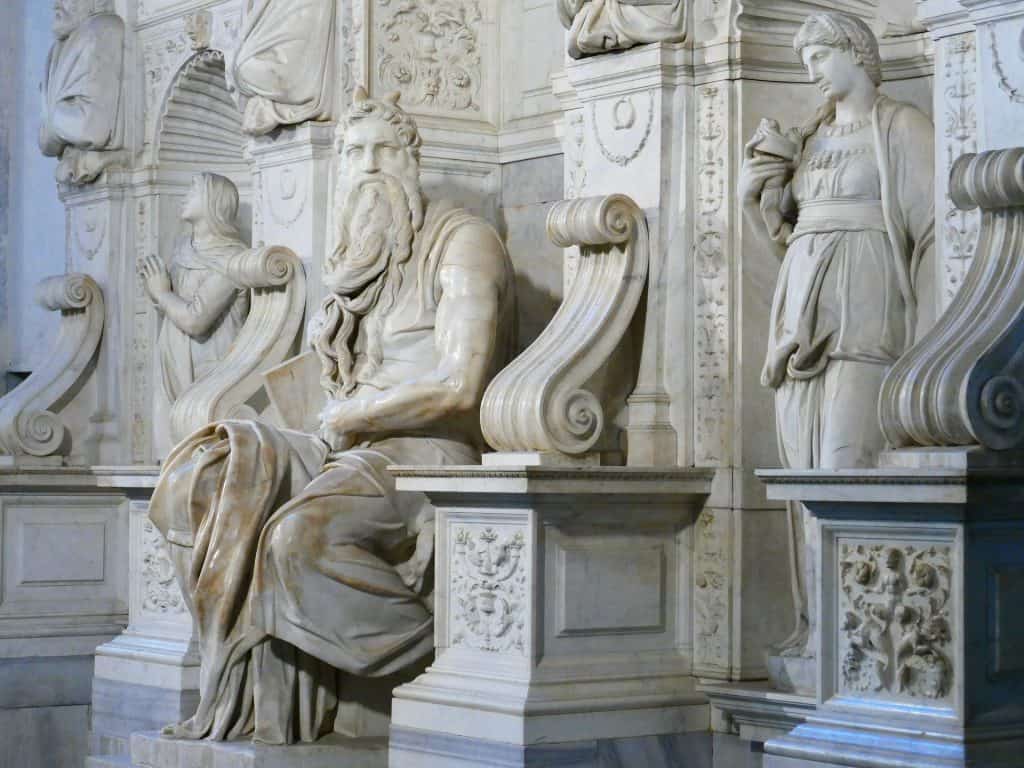 Michelangelo’s Moses in the Church of St Peter in Chains

Located on the Oppian Hill near the Colosseum, this Renaissance-style church is camouflaged by a very modest exterior. The titular church was built in 432-440 AD to house the chains that St Peter wore as a prisoner in Jerusalem and in the Mamertine Prison, which are kept on display under the main altar. It gets most attention, though, for housing Michelangelo’s masterful sculpture of Moses, which was originally commissioned as a tomb for Pope Julius II. 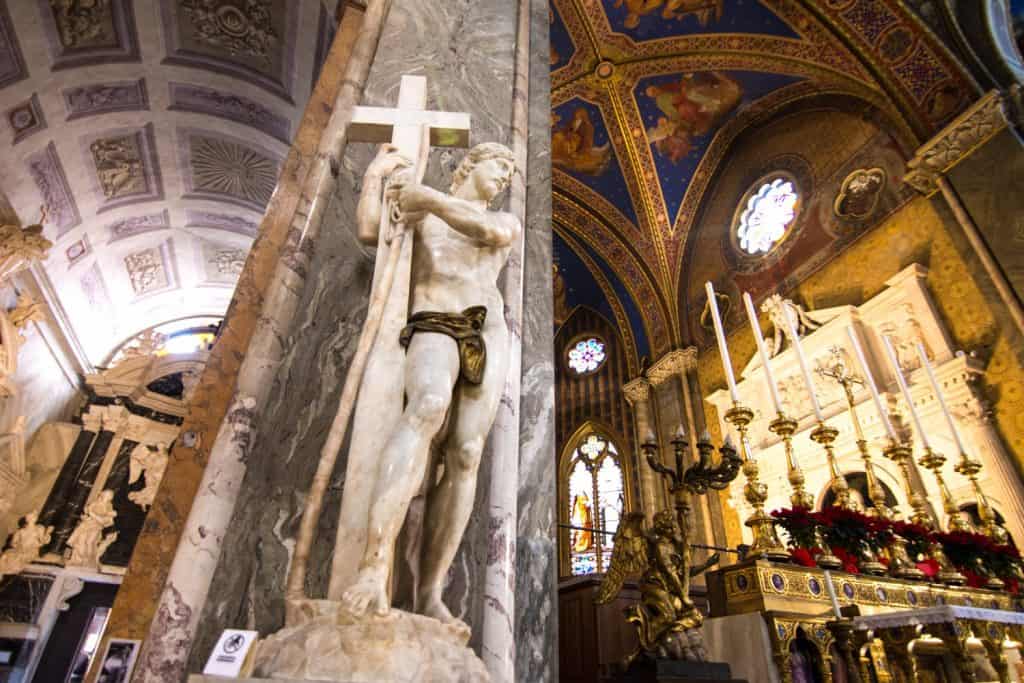 Located just behind the Pantheon is one of the major churches of the Roman Catholic Order of Preachers (or the Dominicans), an original Gothic church building with a Renaissance style façade. The first construction of the church was built directly above (sopra) the ruins of an ancient temple to Egyptian goddess “Isis”, or her Roman counterpart “Minerva”. Michelangelo’s 1521 sculpture of “Christ Carrying the Cross” is perched to the left of the main altar, while Bernini’s sculpture of an elephant hoisting an obelisk can be found in the piazza in front of the church. 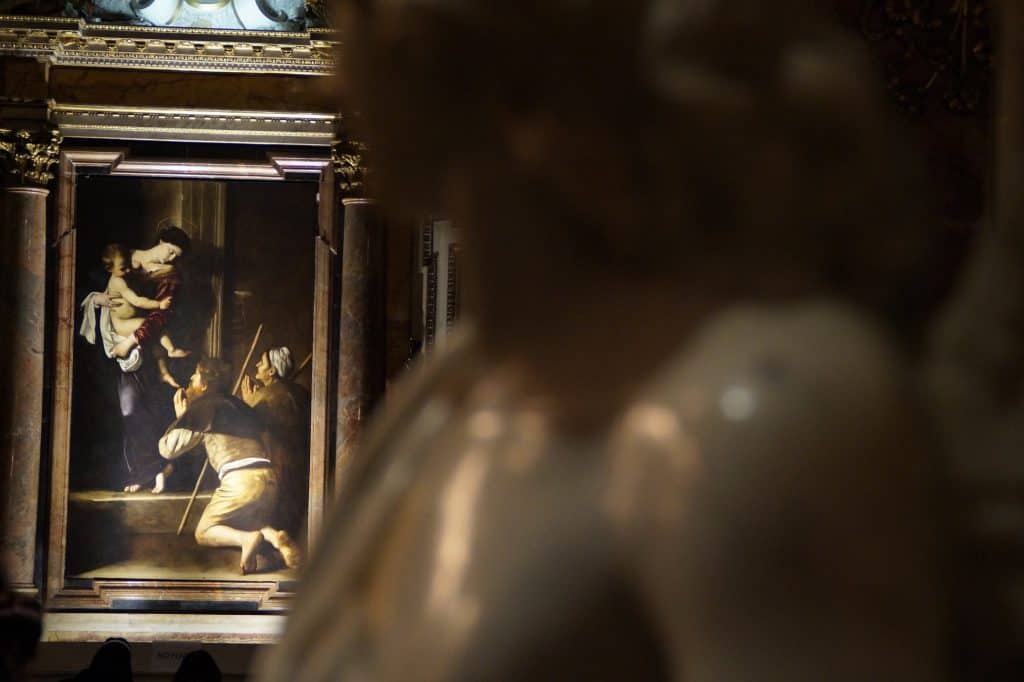 Just Northeast of Navona lays one of the first Roman churches built during the Renaissance. The church, with a façade made almost entirely of travertine stone sourced from the Colosseum and a main altar built by Bernini, houses Caravaggio’s 1606 painting of “Madonna del Loreto” (Madonna of the Pilgrims) and Raphael’s 1512 fresco of “the Prophet Isaiah”. Also noteworthy is the sculpture of “Madonna and child with St Anne”, which was carved by Andrea Sansovino in 1512.

Church of San Francesco a Ripa 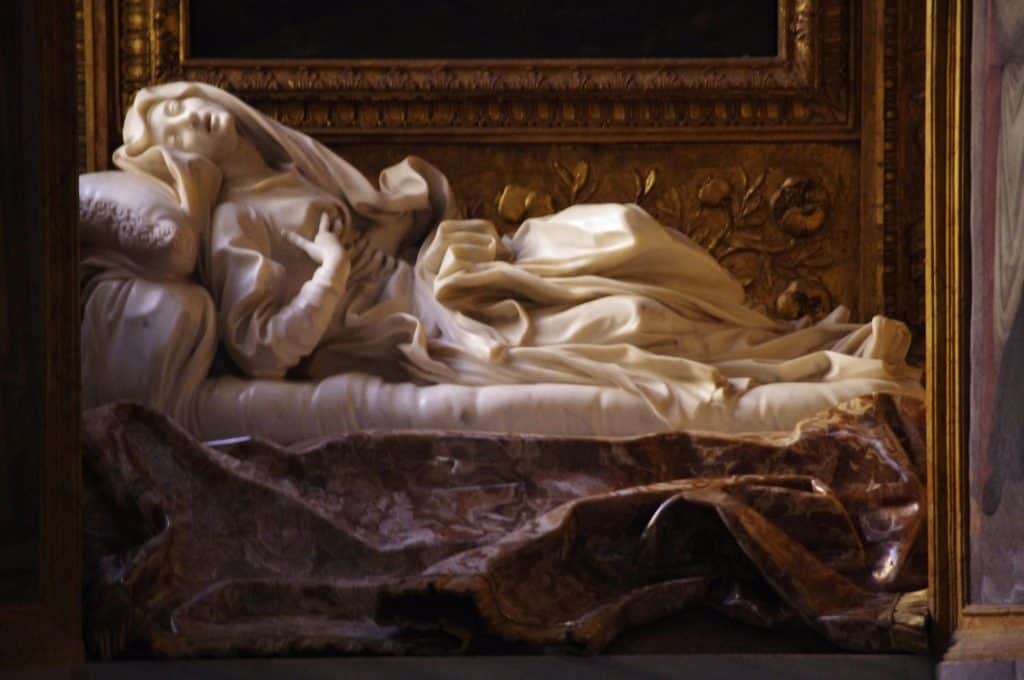 Construction of this church, hidden amongst the charming ivy covered streets of Rione Trastevere, began in 1603. It is dedicated to Francis of Assisi and the name “Ripa” refers to the “riverbanks” of the nearby Tiber River. It houses Bernini’s provocative 1674 sculpture of “Beata (or “Blessed”) Ludovica Albertoni”, whose body is buried beneath the altar of the church. The marble depiction of the Franciscan nun in a state of rapture is one of the artists’ most controversial works. Bernini was also responsible for the church’s Baroque modernization in the 1660’s. 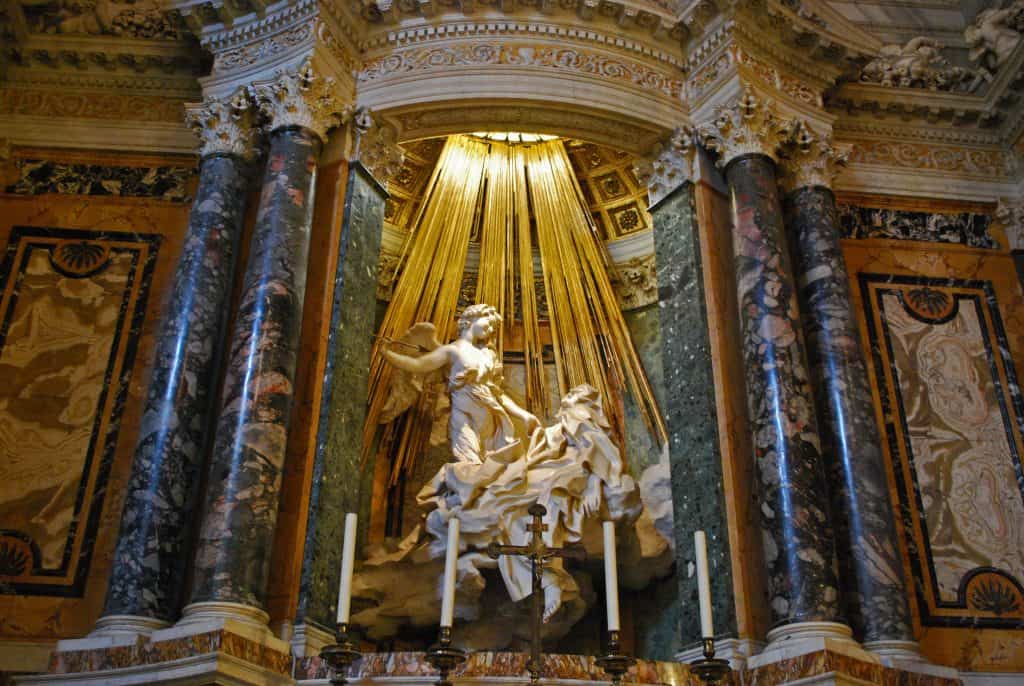 This 16th century Baroque style church is located about halfway between Piazza Barberini and Piazza della Repubblica, just across the beautiful 16thcentury Fontana dell’ Acqua Felice. In the Cornaro Chapel, to the right of the main altar, Bernini’s dazzling 1652 “Ecstasy of Teresa” sculpture can be seen. The artist’s portrayal of Avila’s dream of being pierced in the heart by an angel’s golden staff displays the same immense joy and simultaneous pain that she described in her autobiography. It is a true masterpiece. 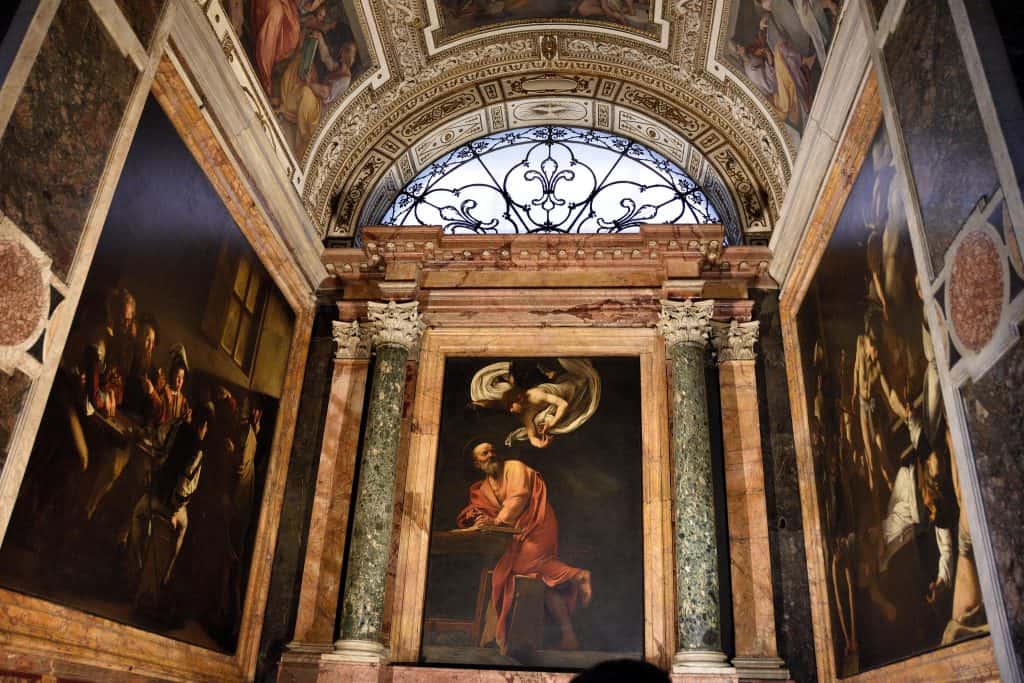 France’s national church in Rome was founded in 1518 by Pope Clement VII and completed in 1589 by Renaissance architects Domenico Fontana and Giacomo della Porta – the interior, though, was transformed during the Baroque period. A real treat for art lovers can be found in the last chapel on the left side of the main altar: Caravaggio’s “St Matthew Cycle”. The three magnificent works include “The Calling of St Matthew”, “St Matthew and the Angel”, and “The Martyrdom of St Matthew”. 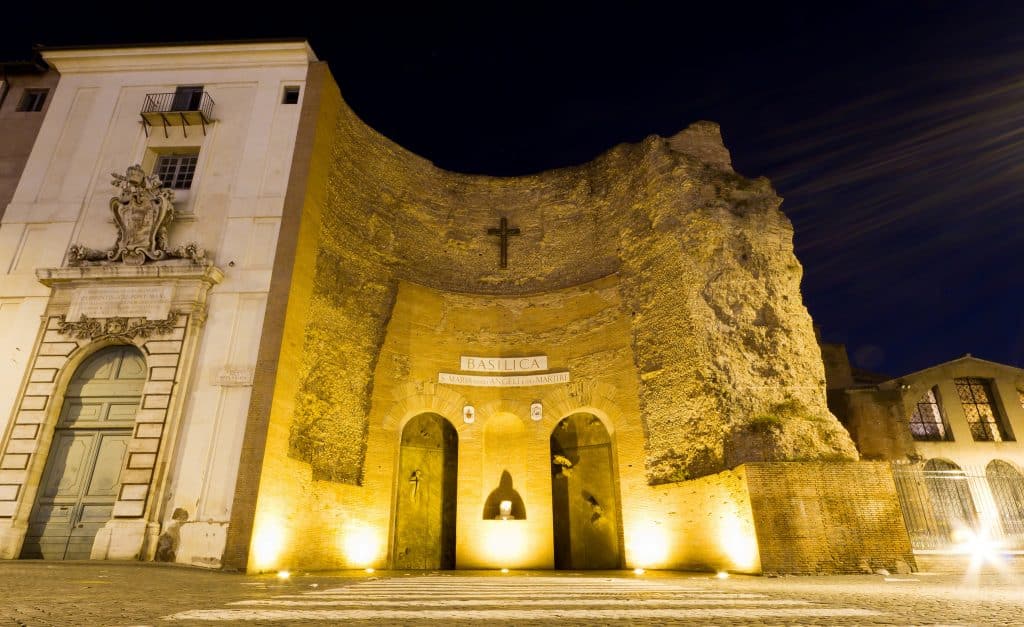 This 16th century titular Basilica church was designed by Michelangelo and built inside the “frigidarium”, or large cold pool, of the Ancient Roman Baths of Diocletian. It houses interesting sculptures as well as a meridian line, or sort of sundial, which is inlaid in bronze and marble into the floor of the church. The basilica is truly unique and Piazza della Repubblica is a dazzling square to see, especially at sundown.

We hope you are as inspired by Rome’s churches as we are! To experience the best of Rome’s art and churches, get in touch with us via E-mail or “Live Chat” at What A Life Tours – where you can select one of our many tour options, or have the perfect itinerary tailored just for you!