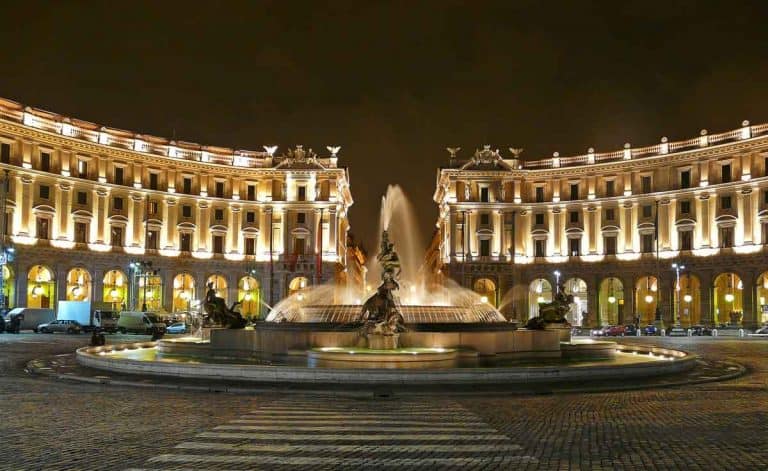 Is there anything more magical than closing your eyes, tossing a glittering coin into the turquoise waters of a Roman fountain and making a wish? Here in Rome, with more fountains than one could possibly have spare pennies, whether it’s a fountain of knowledge or fountain of youth that you seek, your wish is sure to come true. Here’s a look at Rome’s best-loved fountains: 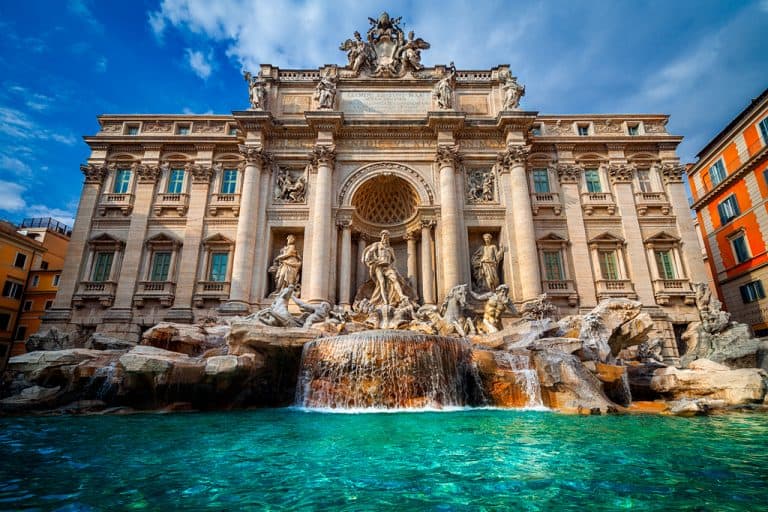 Let’s start with the big one. The world famous Trevi Fountain is without a doubt up there as one of Rome’s most iconic landmarks. Situated in the small and unassuming Piazza di Trevi, the fountain itself is anything but as it presides over the bustling tourists with a marble majesty. An elaborate façade for the old Palazzo Poli, it is a myriad of mythical creatures at the centre of which is Greek sea God Oceanus, often mistaken for Neptune (Neptune should be depicted carrying a triton with a dolphin in tow whereas, here, Oceanus rides in on a seashell led by sea horses and tritons). Having taken over 100 years to complete, the credit for this epic architecture cannot be ascribed to one sole artist. Whilst it was the Baroque architectural giant, Gian Lorenzo Bernini who provided the initial sketches in 1629, most of the acclaim goes to poet and philosopher Nicola Salvi for his contribution in the 18th century. The fountain was finally completed in 1762 by Giuseppe Pannini. With the cool cascades offering a refreshing moment’s break from the city heat, today millions flock to the site of thatfamous scene in Fellini’s La Dolce Vita to toss coins (always right hand over left shoulder according to superstition) to ensure their return to the eternal city. 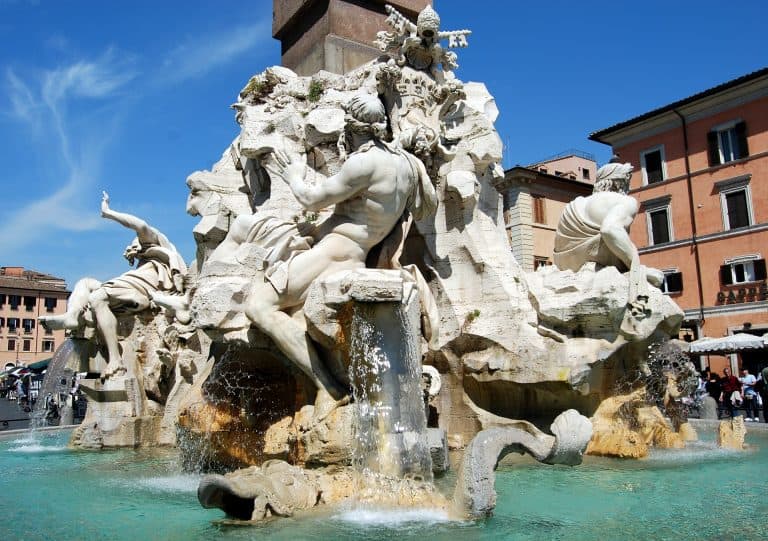 The stunning Piazza Navona is home to not one, not two but three heavenly fountains to add to the list. The North side hosts the dramatic Fontana del Nettuno whilst to the South, you’ll find the rose-coloured marble Fontana del Moro. However, taking center stage, the most famous and perhaps the most impressive is Bernini’s Fontana dei Quattro Fiumi. Designed in 1651 this striking water feature is composed of four Gods each representing a major river of the continents, hence the name ‘Fountain of the Four Rivers’. It depicts the Nile for Africa, the Danube for Europe, the Ganges for Asia and the Plate for the Americas. In the very center, you cannot miss the imposing ancient Egyptian obelisk that stands tall and proud above the piazza. This fountain is a 360° spectacle where each angle tells a different part of the story. 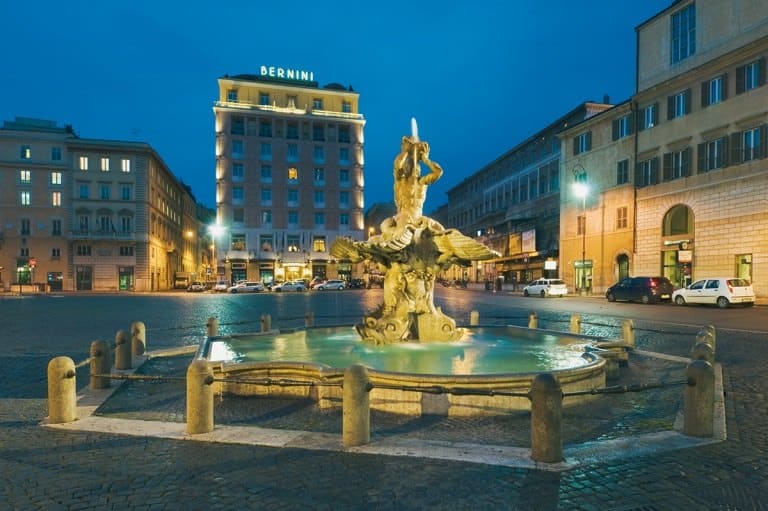 Bernini strikes again! This time his Baroque flair is taken to Piazza Barberini where you’ll find the commanding Fontana del Tritone. Commissioned in 1642 by Bernini’s Patron, Pope Urban VIII, the Triton Fountain seeks to illustrate the tale of Triton in Ovid’s Metamorphoses. Rising from the clear waters is the unmistakable figure of the sea God Triton blowing into a conch shell as he kneels upon a seashell upheld by the tails of four dolphins. It was a fountain of firsts as Bernini’s first freestanding urban fountain and, moreover, the first time that a sculptural fountain (usually found as decorative pieces in villa gardens) was placed in a public urban setting. A trend that most certainly took off! 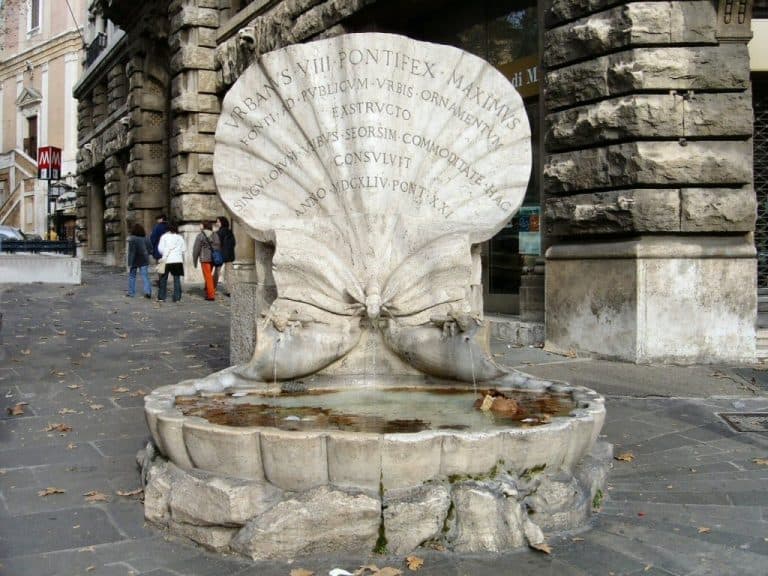 Whilst Piazza Barberini’s main event La Fontana del Tritone is most definitely a must-see, don’t overlook the itsy-bitsy little Fontana del Api tucked away just to the North. Much more modest, the Fontana delle Api is a simply sculpted marble shell with an inscription in honor of Pope Urban. These two Bernini fountains may differ significantly in design and complexity, what they do share is the symbol of the bee, paying homage to the Barberini coat of arms of Bernini’s Papal patron. 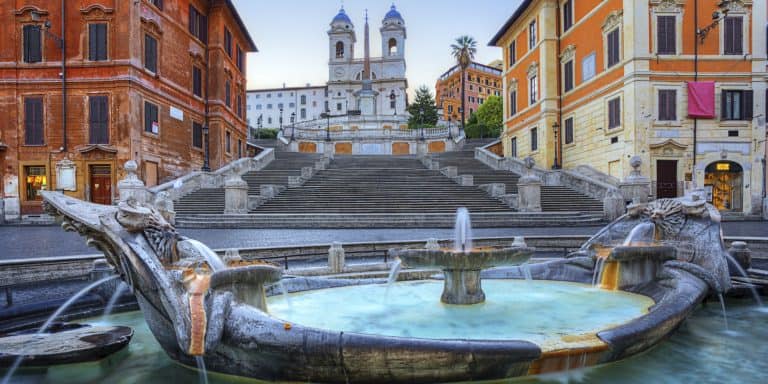 The design of this tranquil pool beneath the Spanish Steps was a family affair, as father and son double act Pietro and, yes you’ve guessed it, Gian Lorenzo Bernini took to yet another request from Pope Urban VIII. The simple interpretation of a half-sunken boat with gently flowing streams of water was not only a clever solution to the low pressure of the water supply from the Acqa Vergine aqueduct but also, as legend has it, represents the scene when the river Tiber flooded the square in 1598. 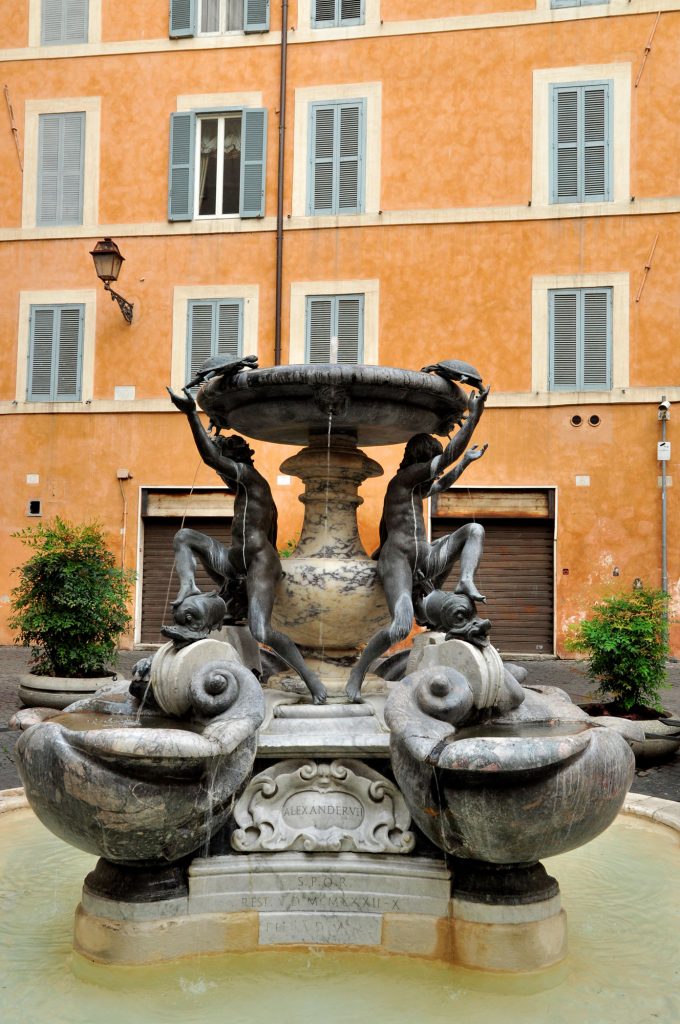 This lesser-known fountain is found tucked away in Piazza Mattei in the Jewish quarter. Also known as ‘Turtle Fountain’, it was completed between 1580 and 1588 by architect Giacomo della Porta and sculptor Taddeo Landini. It was placed in the Piazza at the request of Duke Muzio Mattei so that he could admire it from the comfort of his palace and according to popular Roman legend; he ordered it to be constructed overnight in a bid to impress the father o a woman he wished to marry. The four boys that make up the fountain are each perched upon a dolphin and lift a bronze turtle onto an upper marble basin, however, these turtles were not part of the original design and were added some 60 years later at the suggestion of Bernini. Checking out this fountain also provides an opportunity to get stuck into the array of Roman-Jewish cuisine that is bursting out of every corner of this historical neighborhood.

A much more recent watery work of art is Fontana delle Naiadi in Piazza della Repubblica. Originally the fountain of the Acqua Pia commissioned by Pope Pius IX in 1870, in 1901 Mario Rutelli completely revamped this huge fountain and replaced the four chalk lions with four nude nymphs. The water nymphs portrayed are The Nymph of the Lakes, The Nymph of the Rivers, The Nymph of the Oceans and The Nymph of the Underground Waters. In the center you will see Glaucus, a mortal fisherman turned sea God, who wrestled with a fish. The undeniable sensuality of the nymphs sparked quite a controversy when first completed, so much so that for a period of time they were obscured by a fence! Luckily, the scandal eventually subsided and we can all admire this great fountain in all its glory. 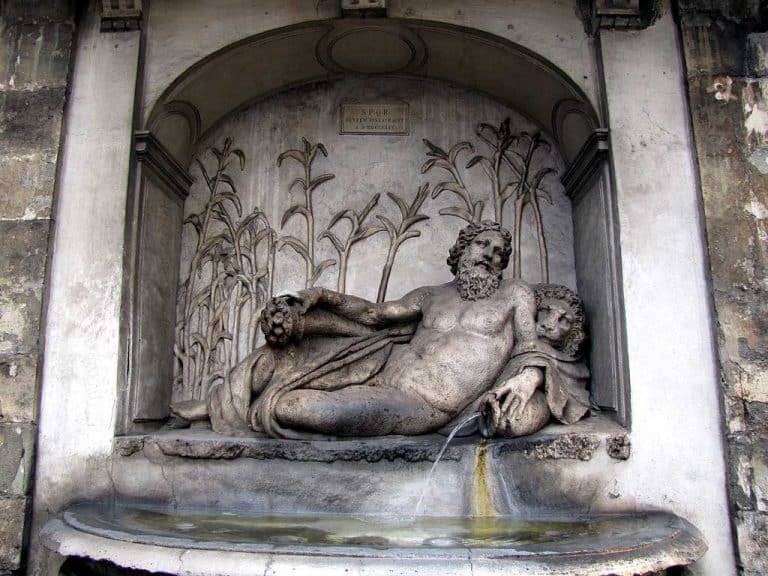 If you’re touring the Roman fountains then you can tick off four from your list in one go at the intersection of Via delle Quattro Fontane and Via del Quirinale. Here you will find an awesome foursome of late Renaissance fountains, installed between 1588 and 1593. Under the order of Pope Sixtus V, this symbolic selection was executed by aptly named Swiss architect, Domenico Fontana and a key figure in Baroque architecture, Tuscan-born Pietro da Cortona. Fontana was responsible for the fountains of the River Tiber (a symbol of Rome), the River Aniene (a tributary of the Tiber) and Juno (a symbol of strength) while Da Cortona is the mastermind behind the Diana fountain, representing chastity. Taking its name from these fantastic four is the Baroque church San Carlo alle Quattro Fontane, completed in 1644 by Francesco Borromini. 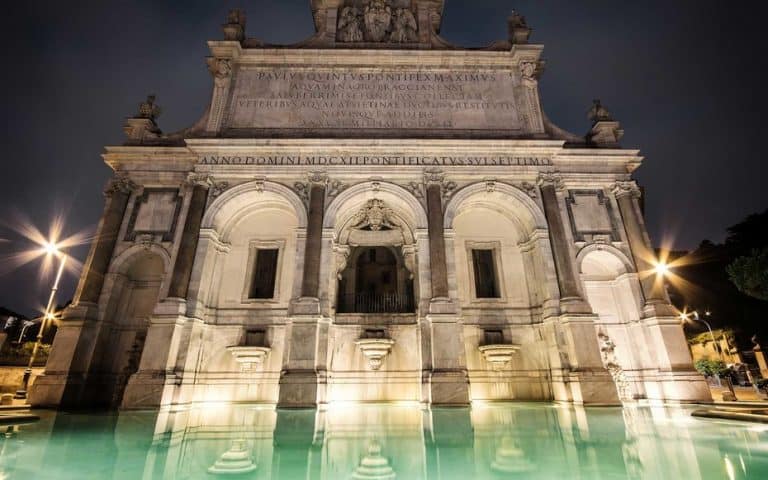 Crossing over Rome’s River Tiber, you can find the monumental Fontana dell’Acqua Paola. Sometimes known as Il Fontanone (the big fountain) it is not only an impressive sight in itself but being located on the Gianicolo hill, it offers one of the best views of the entirety of Rome. With the design work of Domenico Fontana’s brother, Giovanni and the white marble taken from the ruins of the Roman Temple of Minerva, it’s a fountain of great proportion to match the vast panorama it overlooks. A great spot for chasing sunset views that can be followed by a short walk down to the Trastevere neighborhood, the home to some of Rome’s best wining and dining experiences. Lastly, keep an eye out for this impressive fountain as James Bond zooms past it during the car chase in the most recent 007 adventure Spectre.

If you would like to find out more about the history of any of these unique fountains, then check out our Rome tours. Our Rome evening stroll tour gives you an insider’s perspective, taking you to major tourist attractions as well as giving you a sneak peek at some hidden gems.