The Tiber River, which flows through the centre of Rome, has always played an important role in Rome’s life. According to the foundation myth, Romulus and Remus were abandoned on the river banks and left to die, only to be rescued by a she-wolf.  Where there is a river, there must be a bridge! In actual fact, Rome has hundreds of bridges (ponti), some more beautiful than others and many with an interesting history. Here are our favourites:

This bridge is one of Rome’s most stunning and oldest bridges. Originally named Ponte Aelius, it has been known as Ponte Sant’Angelo (bridge of the holy angel) since the Middle Ages when, according to legend, the Archangel Michael appeared on top of Castel Sant’Angelo (Hadrian’s mausoleum) to signify the end of the plague of 590 AD.  Today, a statue of Michael stands in the same place.

The bridge was built by Emperor Hadrian in 135 AD to connect the centre of Rome to his newly erected mausoleum. It became particularly important during the Middle Ages when it was the only passageway connecting the pilgrims to Saint Peter’s Basilica.

The angels, arguably the most beautiful feature of the bridge, were commisioned in 1669 by Pope Clement IX and designed by Baroque sculptor, Gian Lorenzo Bernini. There are 10 unique marble angels that represent the Passion of Christ (the final period of Jesus’ life) and each angel holds an instrument of Christ’s crucifixion. Though a spectacular sight today, try to imagine it during the 16th century when the bridge was used as a place to display the bodies of the executed in order to convey a warning!

This iconic Roman bridge is one of the most frequented pedestrian bridges in the city, as it connects the centre of Rome to Piazza Trilussa in the popular neighbourhood of Trastevere. The bridge dates back to 1475 and it was commissioned by Pope Sixtus IV Della Rovere (1471-1484). It was built to accommodate the large crowds of pilgrims making their way to St Peter’s Basilica, as previously the only bridge crossing near St Peter’s was Ponte Sant’Angelo. The number of pilgrims limited to one bridge was incredibly dangerous; in fact, in 1450 so many people crowded onto Ponte Sant’Angelothere was a stampede and 170 pilgrims died as a result.

Architect Baccio Pontelli reused the foundations of an earlier Roman Bridge, the Pons Aurelius, which was destroyed during the Middle Ages. A particular architectural characteristic is the large round opening on the centre arch of the bridge which Romans have nicknamed occhialone (large eye). This serves the practical purpose of minimising the river’s pressure on the bridge during a flood. 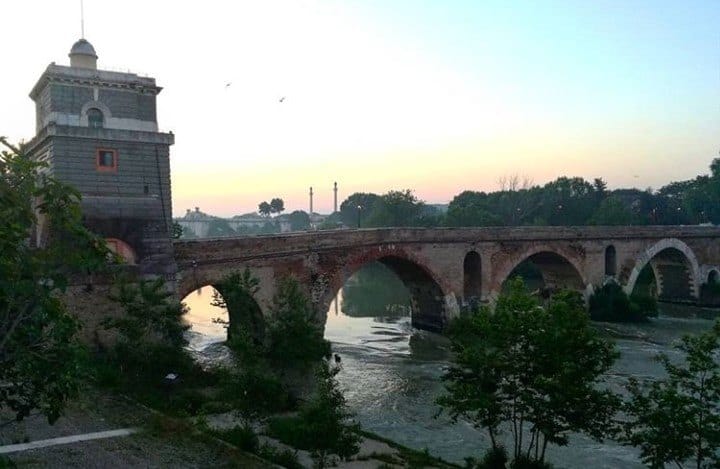 In Ancient Rome it was a strategically important bridge and was the site of the ‘Battle of the Milvian Bridge’ in 312 AD, a pivotal moment in Roman history, in which Constantine the great (a Christian ruler) and Emperor Maxentius (a pagan ruler) fought for control of the Roman Empire. Constantine won the battle which ultimately gave him the ability to ensure Christianity became the dominant religion of the Roman Empire.

Recently, the bridge has faced some more modern problems. Following the release of a popular Italian book Ho voglia di te (I want you) by Federico Moccia in 2006, people began attaching padlocks to the bridge as a symbol of their love and affection for each other.  In 2012 the city removed all the locks for safety reasons and introduced fines for people caught attaching a lock, but the tradition, which has since spread around the world, seems impossible to stop!

Tiber Island (l’isola Tiberina), the small island in the middle of the Tiber river, near Trastevere, is actually connected to the city with two different bridges; Ponte Fabricio and Ponte Cestio.

Ponte Fabricio is the oldest bridge in Rome, built in 62 BC, and still exists in its original state! It is often called Ponte dei Quattro Capi (the bridge of the four heads) which refers to the two marble pillars of the Janus herms (sculptures with the heads of the Roman god, Janus). The herms were a later addition to the bridge, moved in the 14th century from a nearby church.

Ponte Cestio, on the Trastevere side, was built after Ponte Fabricio, somewhere between 62 and 27 BC. Ponte Cestio was the important link that connected the right bank of the Tiber to Tiber Island, and the first bridge to do so! Unfortunately, only a part of the original bridge remains today, due to damage and reconstruction. 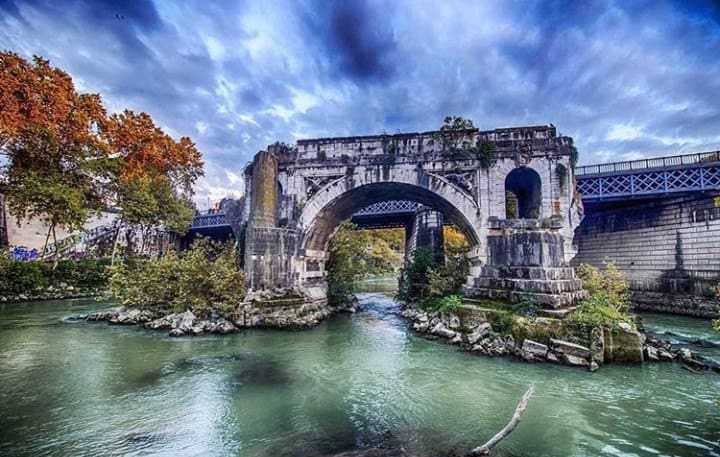 While technically only a remnant of a bridge  (a single arch standing in the middle of the Tevere), Ponte Emilio was once an important fixture in Rome. Today, it’s known by its nickname Ponte Rotto (broken bridge). It is the oldest stone bridge in Rome and was completed in 151 BC. After the collapse of the Roman Empire, the bridge was damaged by several floods and the ravages of time. It’s best viewed from Tiber Island where you can imagine what it might have looked like all those years ago. 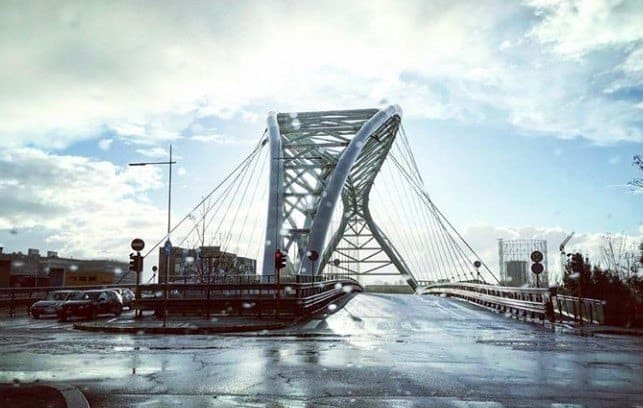 An important link between two Roman neighbourhoods, Garbatella and Ostiense this bridge is one of the more visually unusual in Rome. Its design should mimic the structure of DNA, which is a stark contrast to the Renaissance and Baroque styles of historic Garbatella, though a little more fitting for the working class style of Ostiense. The bridge, which was completed in 2012 is dedicated to Settimia Spizzichino; one of the only survivors of the Roman Holocaust.  Settimia lived in Garbatella until her death in 2000. 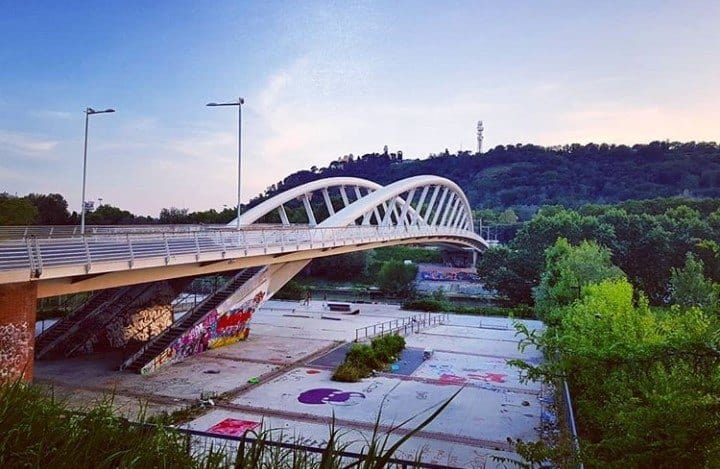 The ‘music’ bridge connects the Flaminio neighbourhood to Parco della Musica and is one of the newest bridges to cross the Tiber River. Completed in 2011, it is the largest purely pedestrian bridge in Rome with a width spanning 20 metres. The design was the result of competition in 2000 that called for bridges that could double as an open space for exhibitions, festivals and fairs.  Most days, however, you’ll just find it full of joggers out for their daily run. The winning design was by Buro Happold Engineers and Powell-Williams Architects who created a sleek and sustainable bridge. 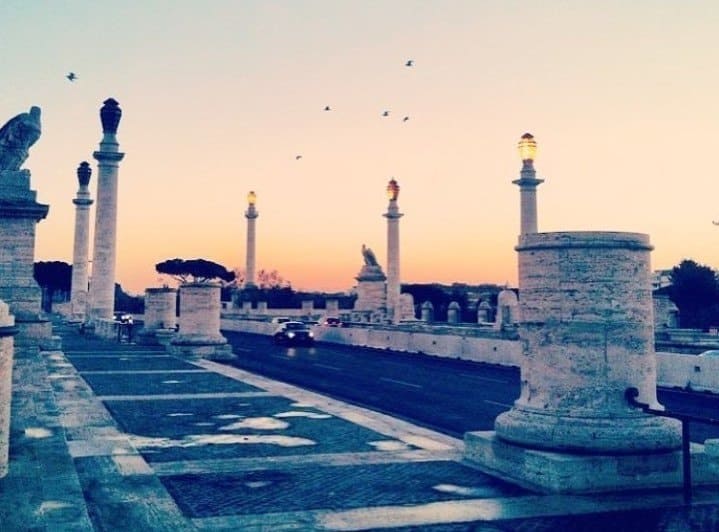 This large bridge connects the Parioli district to Corso di Francia in the north of Rome. Built in the 1930s, it is a product of the fascist era and Mussolini. It’s quite a striking piece of architecture; at 255 metres long and 27 metres wide, it is made entirely of concrete covered with white travertine (limestone). It is decorated with monumental street lamps and eagles. The eagles should symbolize the great military power of the Roman Empire, as well as Mussolini’s vision of Rome.

How many bridges have you crossed in Rome? Tell us your favourites in the comments below.