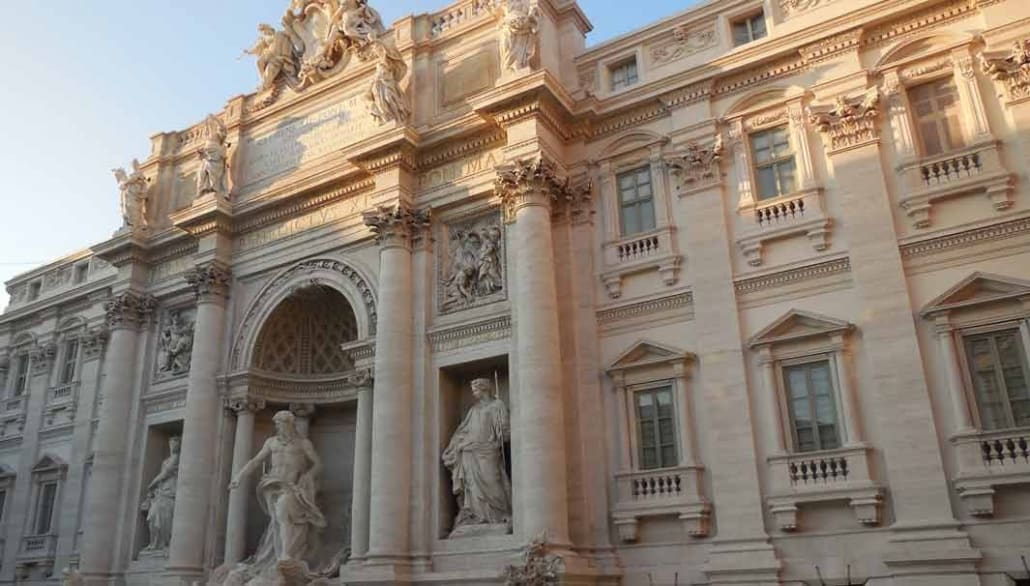 Why You Love, or Will Love the Trevi Fountain

The Trevi Fountain is visited by thousands of globe-trotters each and every day, and it does not disappoint! In fact, when first-time visitors lay their eyes on this exceptional fountain, they’re often struck with disbelief. At 86 feet high, and spanning a width of 161 feet, the Trevi’s size exceeds every fathomable expectation. Not only is it enormous, but it’s also intense. There’s an energy surrounding the fountain, due to the constant rush of recycled water, that meets the ear with a powerful-yet-pleasant song, that sings in perfect symphony with its powerful and fluid sculptures.

This masterpiece of hydraulics is made of tough Travertine stone (the same material that was used to build the Colosseum) and pumps an impressive 2,824,800 cubic feet of water per day. Unlike many Roman fountains, this water is NOT drinkable. It is recycled, almost always filled with filthy coins, and is often bathed in by pigeons. Though the cool reservoir may look tempting and you may want to repeat the iconic scene from ‘La Dolce Vita’, swimming is STRICTLY forbidden, as is sitting on the fountain edge or even dipping a hand in.

Where Does the Trevi Fountain Get its Name?

Contrary to popular belief, the Trevi no longer sources its water from an ancient aqueduct

The Trevi Fountain gets its name from its position at the junction of three roads. “Trevi” is a shortened, one-word version of “tre vie”, which translates from Italian to “three streets”. So, it is in Piazza di Trevi, which would be “the square where three streets meet”. It’s name has no other hidden meaining or reference to artists, benefactors, or the mythological subject matter of the sculpture group.

Many suggest that the Trevi Fountain dates back to Ancient Rome, specifically 19 BC, but that isn’t really true. The truth is, the original water source was the Ancient Roman Acqua Virgo aqueduct (a part of which can be seen in the Rinascente shopping center near Piazza Barberini), and yes, that was constructed in 19 BC. But there are still a few chapters between the completion of the aqueduct and the creation of the fountain we see today.

In the 15th century, for example, the Acqua Vergine aqueduct underwent massive restoration. The project included the addition of many “exit points”, where locals could gather clean water from fountains, as well as a change of name to “Acqua Virgo”. Still, it was at least another 200 years before our beloved Trevi was even on the radar.

In 1730, Pope Clement XII initiated a competition in which architects submitted designs for a grand fountain façade. Though the rightful winner was a Florentine man, the local public met the result with an outcry for a Roman artist. In turn, the opportunity was handed to the second-place architect, Nicola Salvi, who began construction in 1732.

Unfortunately, as was the case with many Renaissance and Baroque architects, Salvi did not live to see the completion of his legacy. Giuseppe Pannini took over the project in 1751 and, with the help of Italian sculptors Pietro Bracci, Filippo della Valle, Giovanni Grossi, and Andrea Bergondi, completed the Trevi Fountain in 1762.

What Does the Trevi Fountain Represent? 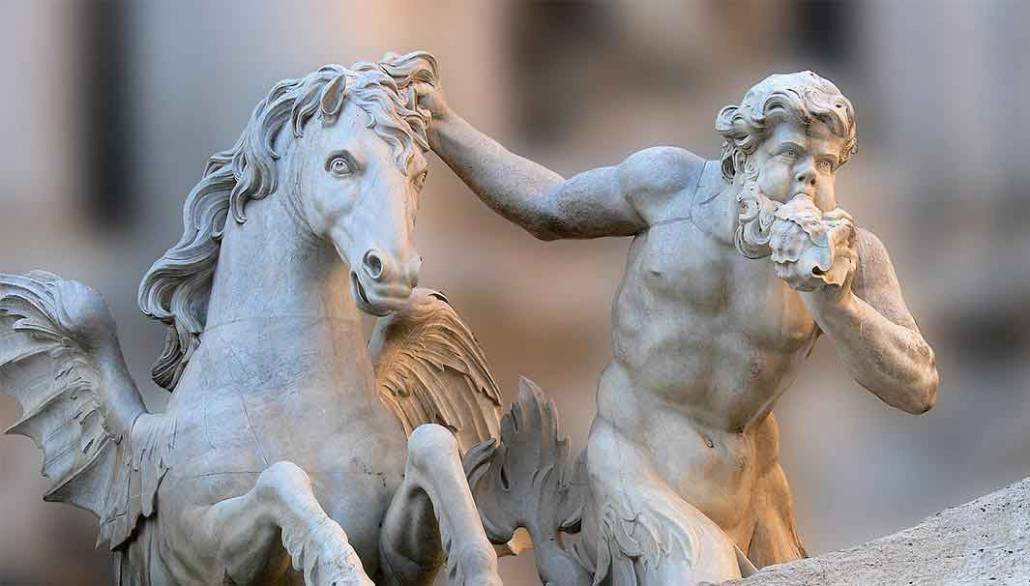 Artistically speaking, the Trevi Fountain takes a lot of inspiration from ancient mythology – a familiar trend of the Baroque period. The central figure of the fountain is Poseidon, also known as Neptune, the God of the Sea. He is led by two men and winged horses, one of which is tranquil and the other turbulent, an allegory for the duality of water as an unpredictable element. Lone female figures grace either side of the façade. One carries a cornucopia, symbolizing abundance and wealth, while the other holds a sphere, a symbol for purity and air.

Why Do People Throw Coins in the Trevi Fountain? 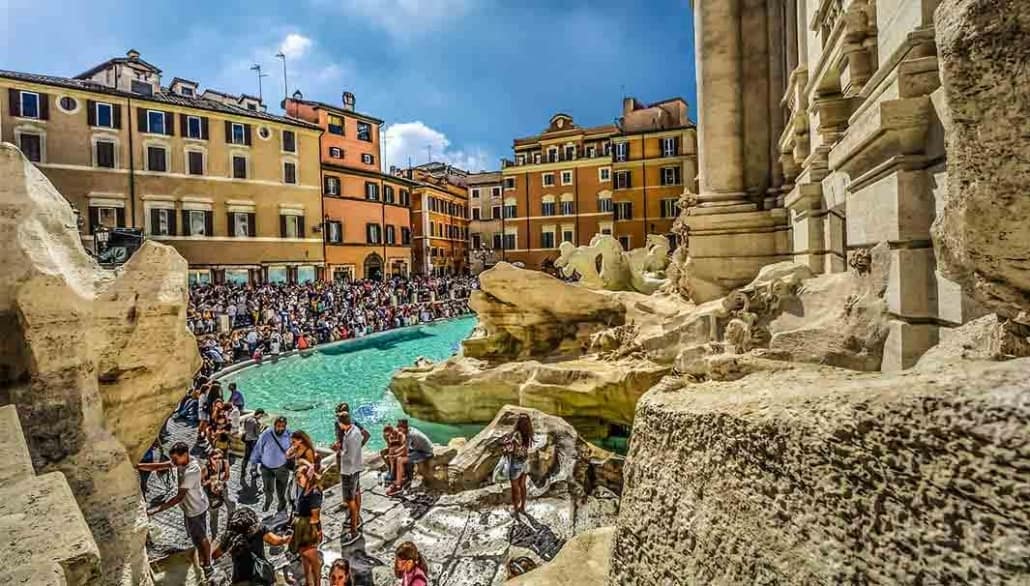 Though the origin of the legend is unclear, it has been documented by writers and poets since the 19th century, sometimes with varying details. For example, in 1860, Nathaniel Hawthorne wrote about a woman drinking from the Trevi Fountain with hopes that the legend would ensure her return to Rome. Later accounts would suggest that one should add a coin toss to the ritual and, eventually, believers stopped drinking and started throwing more coins.

Today, many folks believe (or at least entertain the idea) that tossing one coin in, with your right hand over your left shoulder, will ensure your return to Rome. Tossing two coins means you’ll return to Rome and fall in love. And for three coins, you can add marriage to the equation.

Whether visitors actually believe in the tales or are just trying to capture the perfect selfie, they can rest assured that their coins are used for a good cause. In fact, the Italian charity “Caritas” collects up to €3,000 a day from the Trevi Fountain, aiding the needy with access to groceries.

The Trevi Fountain in Pop Culture 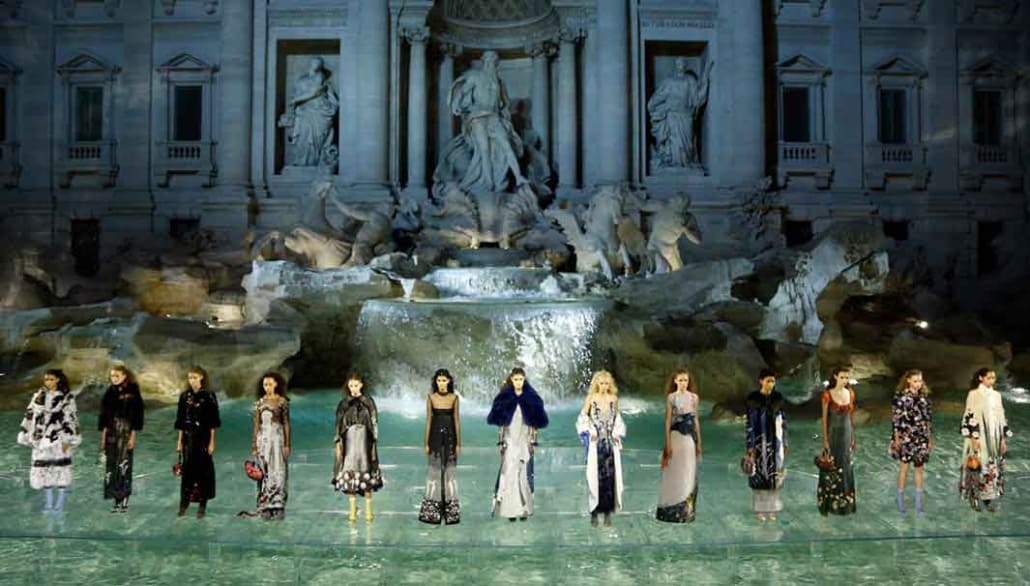 The Trevi Fountain is undeniably one of the most iconic architectural wonders of the world. Its image has been printed on a variety of mediums, from Italian National Postage Stamps to fashionable handbags. Disney’s Epcot Center made a half-baked attempt with a tiny reconstruction (if you can call it that) and the famous LEGO toy brand even designed a detailed Trevi Fountain set.

Photo appearances range from fancy photoshoots to priceless mementos, and the name itself has been sung in several tunes. Fellini’s “La Dolce Vita” is accredited for bringing big-screen fame to the Trevi, but it also made appearances in “Roman Holiday”, “Three Coins in the Fountain”, and even Disney’s Lizzie McGuire movie. In 2016, following a $2.4 million restoration, the Trevi was covered with plexiglass and used as a runway for Fendi’s 90th Anniversary Fashion Show – perhaps its most creative feature yet!

Tips for the Perfect Trevi Experience

There are several keys to unlocking the perfect Trevi Fountain experience! As it’s a very popular tourist destination, the crowds can be immense and, frankly, overwhelming. Avoid the hoards by visiting during Rome’s low tourist season (for example, winter rather than summer). You’ll find a much more peaceful ambiance during early morning hours or late in the evening, rather than peak afternoon time.

Consider visiting as a part of a guided tour of Rome, so you can forget about maps and navigation, allowing yourself to feel the full gravity of unexpectedly turning a corner to one of the most magnificent sights you’ll see in your life! Not to mention, a knowledgeable guide can give you the inside scoop on the fountain and everything else the Eternal City has to offer!