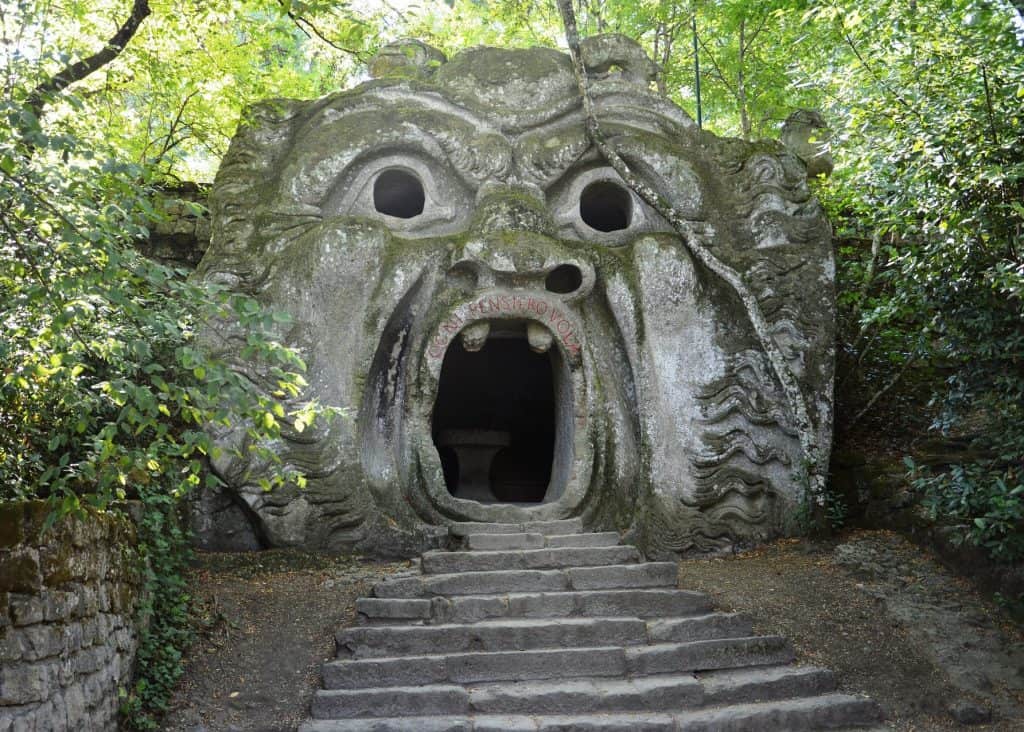 Parco dei Mostri (Park of the monsters) is a little bit off the beaten path, so your best option is to go by car. From Rome, head north on the A1 highway and follow the signs to Bomarzo. The park sits below the town of Bomarzo but it is well signposted so you won’t have any trouble finding it. Parking is free and easy to find in front of the visitor’s centre. This is a welcome change, as the words ‘free’ and ‘easy’ don’t usually go together with parking in Italy!

If you don’t have access to a car, or if you’re just feeling a little adventurous you can also reach Parco dei Mostri by public transport. This option is a little more time consuming (around 3+ hours each way) but if you’re well organised and determined it’s doable.

Take the FL3 regional train from Roma Ostiense, Roma Tuscolana or Roma Tiburtina (these stations can be reached from Roma Termini by metro) to Viterbo Porta Fiorentina. Walk about 15 minutes to the Cotral bus terminaland take a bus to Bomarzo.  From the bus station in Bomarzo, you will need to walk around 20 minutes downhill to the Park.  Wear comfortable shoes as you’ll also be making that trek back uphill to the bus station later! Make sure you check the time of the last bus to Viterbo for the return journey, as buses tend to be infrequent.

All year from 8:30am to sunset 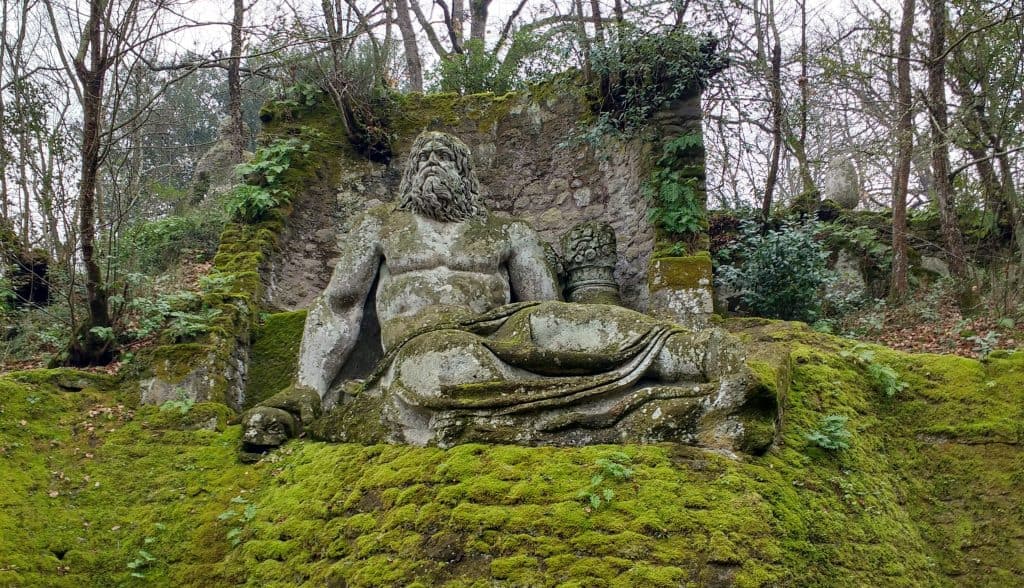 Parco dei Mostri isn’t as scary as it sounds, it is, however, wonderfully surreal. It is the vision of the 16th-century Duke of Bomarzo, Pier Francesco Orsini.  Orsini was a patron of the arts, but was a ruined man after a devastating chain of events; he fought in a war, witnessed his best friend die and was held as a war prisoner for many years. When he finally returned home, his wife died shortly after.  An expression of his grief and his state of mind, Parco dei Mostri was designed to shock its visitors.

The park was created by the architect Pirro Ligorio and sculptor Simone Moschino. Ligorio was a well-established architect at this time, having previously completed St Peter’s Cathedral in Rome after the death of Michelangelo and was also responsible for designing the renaissance marvel; Villa d’Este in Tivoli.

Completed in 1552, at the height of the Renaissance, when lavish beauty and symmetry were valued, the Parco dei Mostri and its unique sculptures were considered too grotesque and shocking. Due to its unpopularity, the park fell into neglect for centuries until Salvador Dali, the surrealist Spanish painter took an interest in it. Dali made a short film about the park and it gained enough attention to attract a private buyer in the 1950s; the Bettini family. They restored the park to its current glory, and since then it has inspired a slew of artists and writers as well as making a name for itself as an unusual attraction. 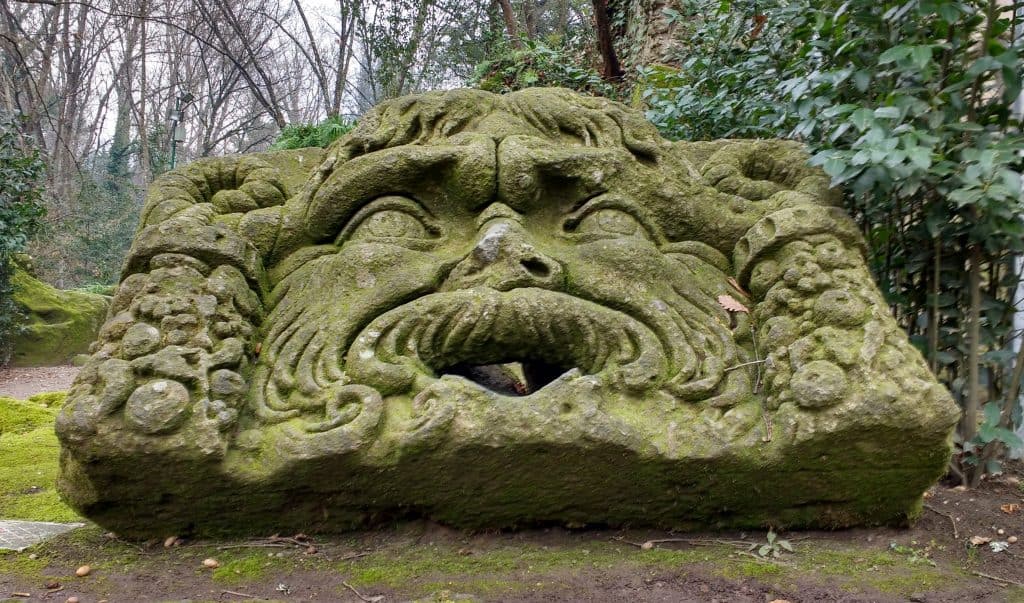 Parco dei Mostri is scattered with mythical creatures such as Pegasus,  Cerberus, Sirens and several fantastical animals all who seemingly bare no relation to one another. The style of the park is in stark contrast to the perfectly symmetrical Renaissance gardens of the same time. Perhaps it is supposed to mirror the randomness and the surrealist nature of grief.

You’ll be provided with a map upon entry, make sure you follow it to find every one of the 35 points of interest. The order doesn’t matter, but you won’t want to miss a thing!

Here are some highlights:

The Mouth of Hell /Orcus

Arguably the most famous of the sculptures, the Orcus, a huge grinning face with its mouth seemingly frozen in a scream of terror, stands in the middle of the park.

In mythology, the Orcus was a god of the underworld and symbolises the entrance to hell.  Carved on the sculpture’s upper lip are the words ‘ogni penserio vola’ (Every thought flies) which references its superb acoustics; a whisper inside the mouth can be clearly heard by anyone standing at the base of the steps outside.

As its name suggests, this two-story house is on a severe lean. Interestingly, the inside is slanted at the opposite angle to the outside, so you’ll feel truly off balance when you step inside!

This appropriately named colossal statue shows two giants fighting and represents the struggle between good and evil, alluding to the myth of Hercules (good) and Cacus (evil). In Roman mythology, Cacus was a fire-breathing giant who fed on humans and nailed the heads of his victims to the entrance of his cave. He was eventually strangled and killed by Hercules.

Hannibal Barca, born in Carthage in 247 BC (modern-day Tunisia) is considered one of history’s great military commanders.

An enemy to Rome, he was famous for crossing the Alps with his elephant army. The ‘war elephants’, complete with armour, were a force to be reckoned with.

Take your time to explore the park, don’t try to make too much sense of what you see, but rather just enjoy the surrealist nature of it all! 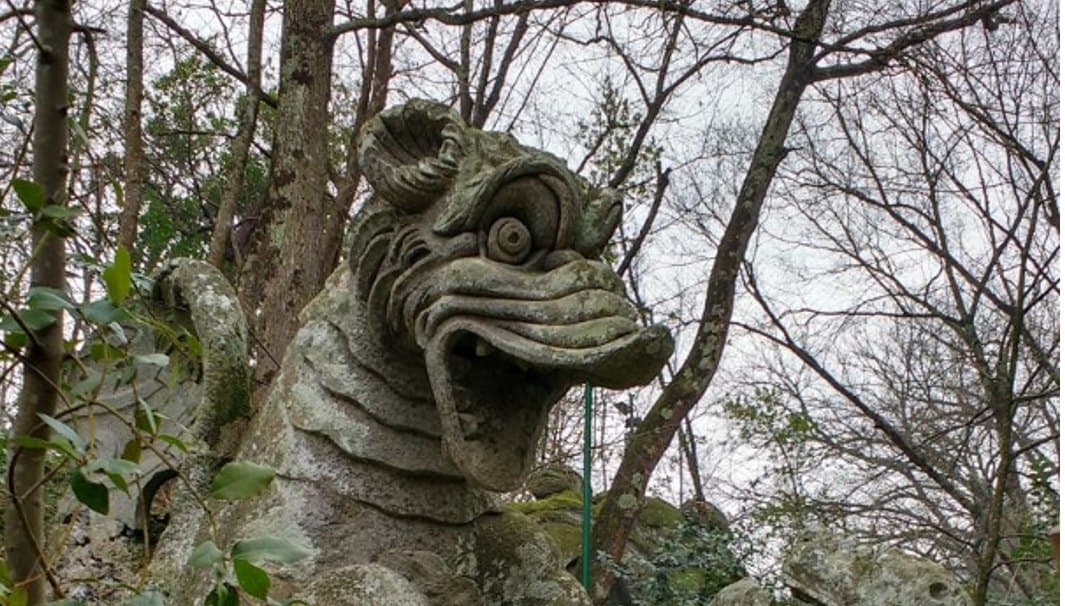 The best option for lunch is to bring your own! Unfortunately bringing food into the park is forbidden, however, there is a huge grassed area surrounding the park, as well as some tables and benches. So, pack your own food and enjoy a leisurely picnic after feasting your eyes on your unusual surroundings.

There’s a snack bar in the visitor’s centre if you need a coffee break or a quick bite. However, the restaurant on site is only available for large tour group bookings.

Sitting above the park, the medieval town of Bomarzo is another option for lunch. There’s something to suit everyone. If you’re in the mood for pizza try Trattoria Pizzeria Da Zena, or head to Il Quadrifoglio for a rustic meal made with seasonal ingredients.

Parco dei Mostri is an utterly unique realisation of one man’s imagination and well worth a visit!