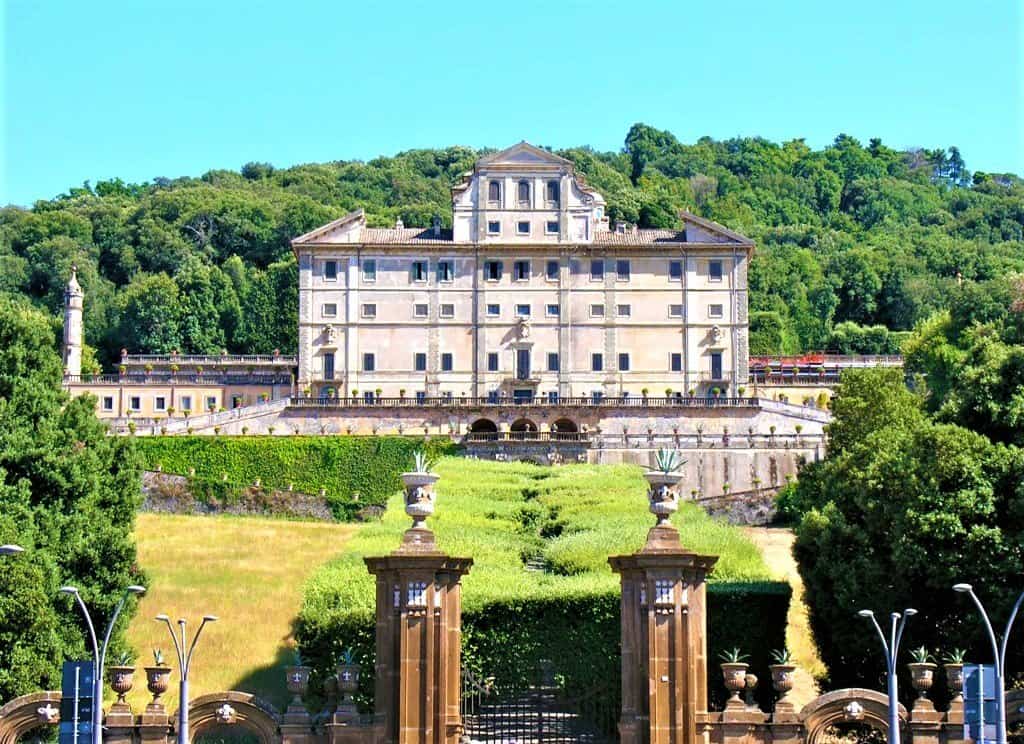 Frascati is one of the hilltop towns collectively known as the Castelli Romani (see also Castel Gandolfo). It sits in the Alban hills just south of Rome, and the best news is that it’s easily reached by public transport. Trains depart hourly from Roma Termini. A one-way ticket costs €2.10 per person. Return tickets can be purchased at Termini or at Frascati station. For specific train times check the Trenitalia website.  As with many of these hilltop towns, the train station is at the bottom of the hill. However, it’s only a short climb up some stairs before you reach the edge of the town.

You can also catch a Cotral bus from Roma Anagnina (metro A), which is a good option if you are coming from the south of Rome. The journey time is about 20 minutes (depending on traffic) and tickets cost €1.10 one way.  Buses depart every 30 minutes. Click here for more information. The bus stops in Piazza Guglielmo Marconi, just outside the historic centre, so you’ll avoid the climb from the train station. 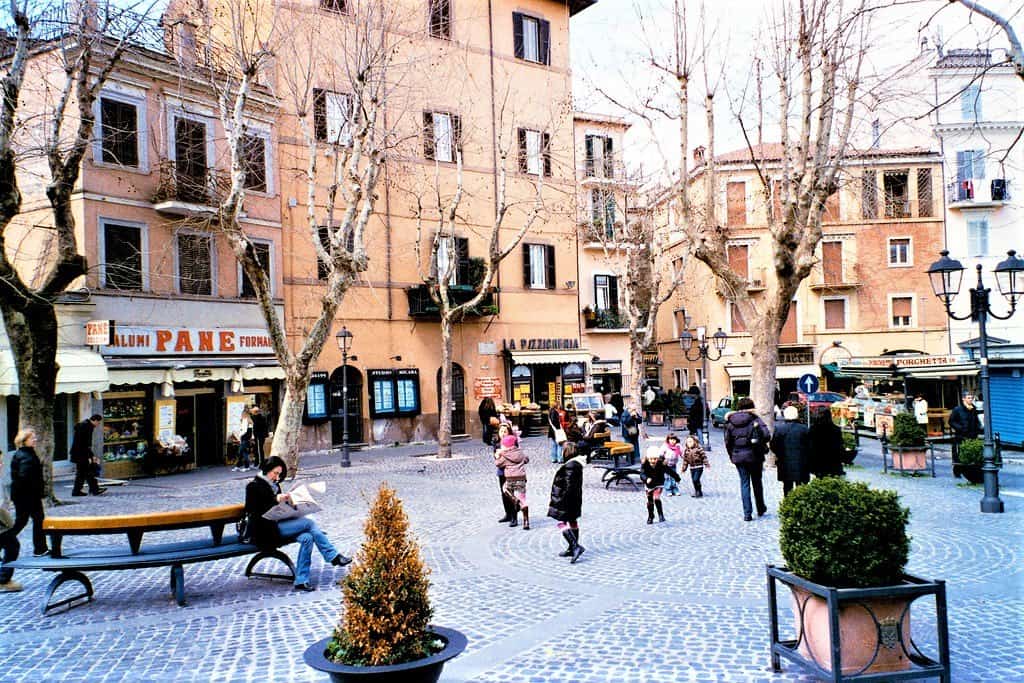 Frascati dates back to around 7th century BC. The name of the village is said to come from a local tradition of collecting firewood (frasche). Frascati was just a small village until it increased in size and importance after the nearby town of Tusculum was destroyed in the 12th century and all its surviving inhabitants moved to Frascati.

Like many of the hilltop towns in the Castelli Romani area, Frascati has long served as a favourite summer escape for noble Romans. Its location atop a hill makes it notably cooler than Rome, so, it will come as no surprise the most important archaeological find dating back Ancient Rome are the ruins of a villa.

Not just any villa, however, but a villa belonging to Lucullus; an important politician and military leader in the late Roman Republic. This particular villa had a string of famous owners after Lucullus, including the mother of Nero; Agrippina the Younger. You might be familiar with Nero, one of the more notorious Roman Emperors. Legend says that during the great fire of Rome in 64AD, Nero played the violin while Rome burned.

The tradition of nobles building villas in Frascati flourished in the 16th century and thus began the divide between the nobles and the villagers and pinpointed Frascati as a destination for the rich. Many of these villas remain today, and while their exteriors look simple and bare, their exaggerated interiors offer a real insight into how the nobles lived.

Not just to be remembered as a playground for the rich and famous, Frascati played an important role in the plague epidemic of Rome in 1837. During this horrific time, around 5,000 people were forced to leave Rome and Frascati was the only village that welcomed them. Since then, Frascati’s flag has born the same colours of Rome’s; red and yellow.

The town itself has a charming historic centre, and an impressive view overlooking Rome. Frascati is famous for its white wine, and its villas, and there’s no reason you can’t enjoy both when you visit. Though for obvious reasons, it’s better to save the wine for last! There’s no shortage of bars where you can quench your thirst while taking in the small town atmosphere.

While Frascati is home to many villas, most of them are closed to the public, and many unfortunately suffered substantial damage caused by bombing during World War 11.

The most impressive, Villa Aldobrandini, allows access to its gardens. The building itself is still privately owned by the Aldobrandini family. It’s hard to miss, standing on a hill above the main piazza, dominating the skyline. Check with the tourist office before hiking up the hill for the exact entrance, as it can be a little tricky to locate.

One of the most impressive features of the gardens is the ‘water theatre’ (teatro delle acque) which was designed by Orazio Olivieri. In order to provide water to the garden, and this feature, an 8km aqueduct was built. These days there is no water flowing through the garden, but it’s an impressive feat nonetheless.

Although the beauty of the villa is slowly fading, it’s not hard to imagine what it would have been like at its peak. The gardens provide a peaceful glimpse of past glory, as well as beautiful panoramic views of Frascati and beyond.

Le Scuderie, the former stables at Villa Aldobrandini, have been restored and are now home to the Museo Tuscolano, which is dedicated to local history and houses many Roman artefacts and archaeological finds associated with local villas.

Frascati is home to many churches, the most important being the 16th-century Cathedral of Saint Peter. The baroque facade is the work of architect Girolamo Fontana. Much of the inside was destroyed in World War 11, but the church is still the final resting place for the heart of Charles Stuart, an 18th century Scottish Prince. The rest of his body is buried in Saint Peter’s Basicilla in Rome.

Just outside of Frascati, about a 20-minute drive, lies the ancient city of Tusculum;  an important Latin city, predating Rome. According to one legend, it was founded by Telegonus, the son of Odysseus/Ulysses and Circe.

Tusculum was destroyed in the 1191 century by Rome and was abandoned until the early 20th century when excavations began.  The park includes the ruins of a theatre, amphitheatre, a basilica, a forum, a villa, several temples and an acropolis.

No visit to Frascati would be complete without sampling some of the local white wine. However, if you’d like to take one step further and visit a vineyard there’s plenty to choose from! Check out Minardi or Merumalia for information about wine tasting and vineyard visits. 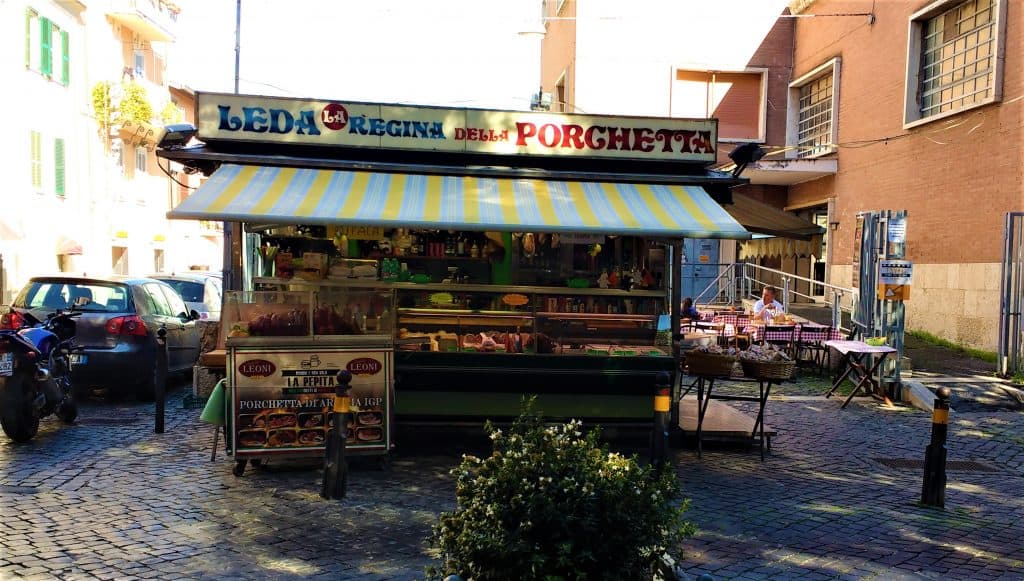 Frascati may be famous for its wine, but that means you’ll need some food to pair it with at some point! If you’re in town for lunch, here are our recommendations;

Leda, La Regina Della Porchetta (pictured above) lives up to her name (Queen of Porchetta). This little food cart, sitting in Piazza del Mercato in the centre of Frascati could be easily overlooked. Our advice? Don’t! If you like Porchetta (who doesn’t?), this is the place for you. Tell the staff how many people, and they’ll give you the right portion of Porchetta (and whatever else you might desire; cheese, bread etc). You can take your food and sit at one of the tables at the back of the cart, or take away for a picnic lunch elsewhere.

If you’d like a more traditional sit-down meal, go to Cacciani for great food with a stunning view overlooking Rome. The restaurant boasts a gorgeous outdoor terrace, so if the weather is nice, ask to be seated outside. You can choose to dine à la carte or with a fixed menu. The wine list is extensive and the helpful staff can help you navigate both the food and the wine, both of which are exceptional. 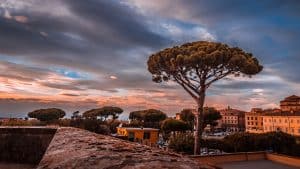 Frascati is a small town with a lot to offer; stunning views, beautiful villas and incredible wine!