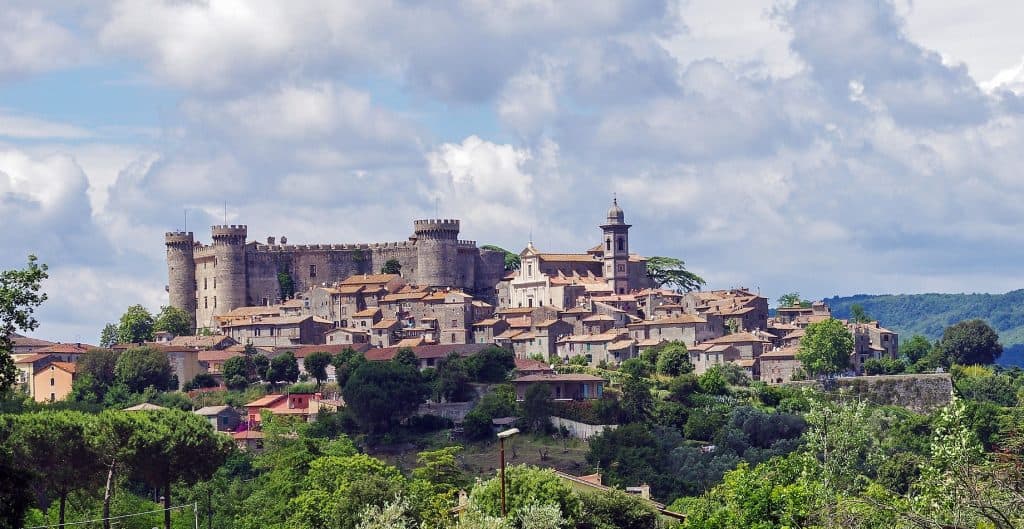 How to Get There:

Bracciano is accessible by the FL3 urban train from intercity stations Tiburtina, Tuscolana, Ostiense and Valle Aurelia. Tiburtina and Ostiense are connected to metro B and Tuscolana and Valle Aurelia are connected to metro A.  Depending on which station you depart from, tickets will set you back between €3.00-€3.60 and the journey time varies from 1 hour to 1.5 hours (trains depart hourly). From the Bracciano train station, it is an easy 5-minute walk to the centre of town.

If you choose to come by car, you’ll have more flexibility to explore the surrounding area. Head north out of Rome on Via Cassia and you’ll reach Bracciano in around 55 minutes. 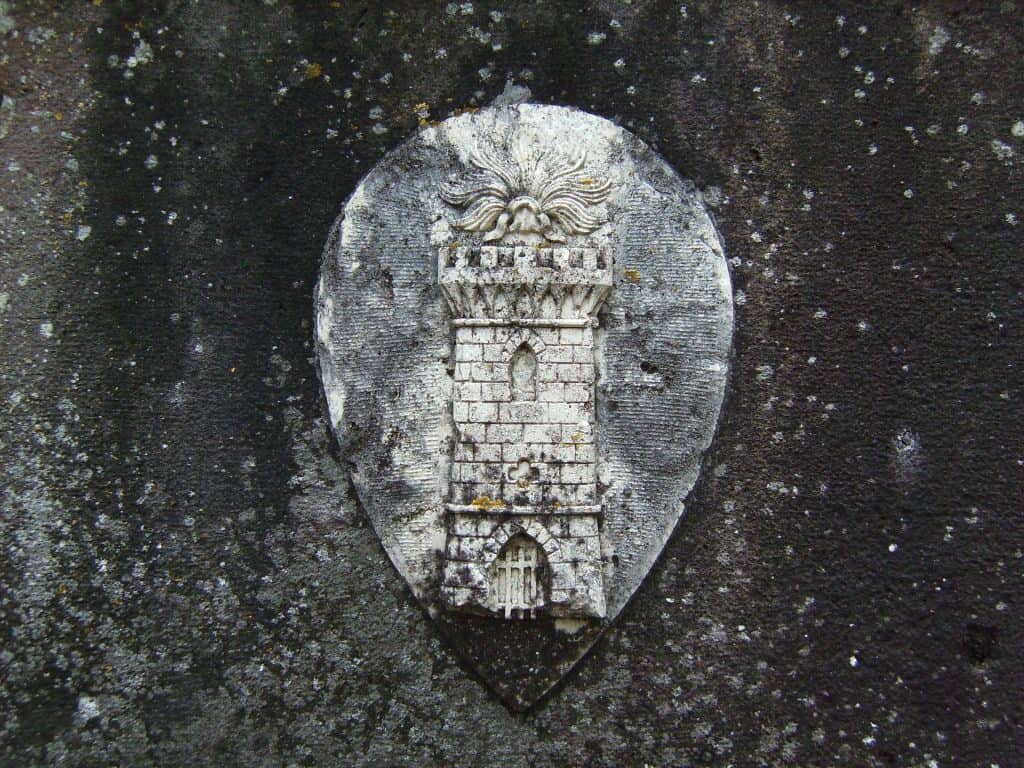 Over the years, Bracciano has been owned and dominated by many different groups of people and noble families. It comes from humble beginnings; in Etruscan times it was a small fishing village. It slowly began to gain more importance around the 10th century BC when a military tower was built to aid in the defence against the Saracen attacks in Italy.

In the 11th century, the territory was bought by the Prefitti di Vico family, who turned the aforementioned tower into a Castle.  The Orsini family, a powerful Italian noble family, took possession of the town soon after in 1234. They developed both the town and the castle and Bracciano flourished and its castle became famous all over Italy.

The Papal State developed a great interest in the town when Pope Sixtus IV, who was forced to flee from the plague that ravaged Rome in 1481, took refuge in Bracciano. During his stay, he decided the Church should rule Bracciano and consequently the Papal state began to attack the town in an attempt to overthrow the Orsini family over the next 20 years. However, due to Bracciano’s great military defences, the attacks were unsuccessful and the Orsini family continued to rule.

In the end, the Orsini family met their decline through money, not war. They lived a lavish life of luxury and their spending eventually resulted in great debt for Bracciano. In 1696 their reign finally ended, and the castle was sold to the Odescalchi family. Though the castle still remains the property of the Odeschalchi, it is named Castello Orsini-Odescalchi to pay homage to both the important noble families of Bracciano. 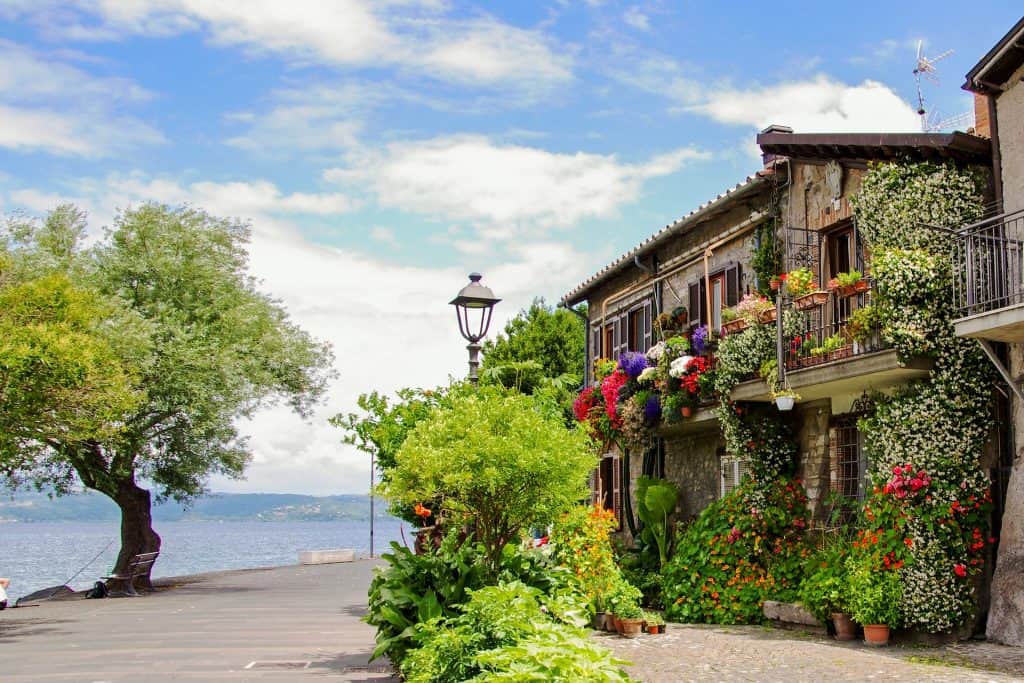 Bracciano is a great mix of history and nature. It sits on the southern shore of Lake Bracciano, the second largest lake in Lazio. The town itself is quite small but is home to an impressive medieval castle that looms over the town centre. Though the castle is the main attraction, the town itself is worth exploring for its winding medieval streets and sweeping lake views. 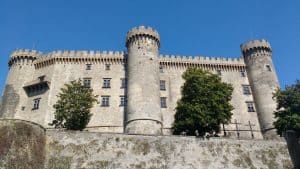 The castle was completed in the 15th century and is one of the largest and well preserved castles in Italy. It is now a centre of cultural events,  a wedding venue for the rich and famous, and a museum.

The museum showcases the original furnishings, frescoed ceilings, renaissance paintings and ceramics as well as a collection of weapons and armour from the Middle Ages. You can also admire its defensive structures, ramparts and gardens on the castle grounds.

The castle is open every day from 10am -17:00-19:00 (season dependent) and tickets cost €8.50. For more information on opening hours, tickets and tours please click here. 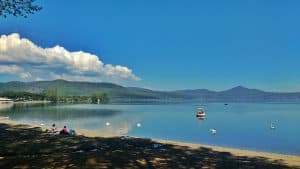 Just down the hill, Lake Bracciano is a peaceful escape. It’s about a 5-minute drive, or a 20-25 minute (2km) walk from the town centre.

The lake is one of the major lakes in Italy, it is the second largest in the region (after Lake Bolsena). It has a perimeter of about 32km and is bordered by three towns; Bracciano, Anguillara Sabazia and Trevignano Romano.

The lake’s brilliant clear blue waters are due to the fact that it serves as a drinking reservoir for Rome and is strictly controlled to avoid pollution. However, it is still a popular spot for swimming and sailing in the summer months. If you’re not a fan of water sports, or it’s simply the wrong season, the beauty of the lake makes it the perfect place for a relaxing walk, or a spot of people watching. 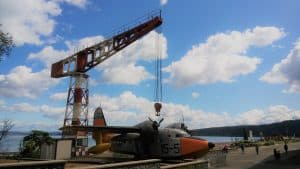 If you are an aviation enthusiast or are simply looking for something unique, don’t miss this museum. Sitting on the shores of the lake on the site of a former seaplane base, it’s about a 15-minute drive from Bracciano.

The museum is open every day except Monday. Admission is free and the information is in English and Italian.

The planes and accompanying artefacts are displayed in four huge hangers; 1. WW1 and early flight, 2. Between the wars, polar exploration and seaplanes, 3. WW2 and 4. Post WW2. You can follow the development of flight, marvel at some incredible machines and also learn about some of the most important Italian pilots. 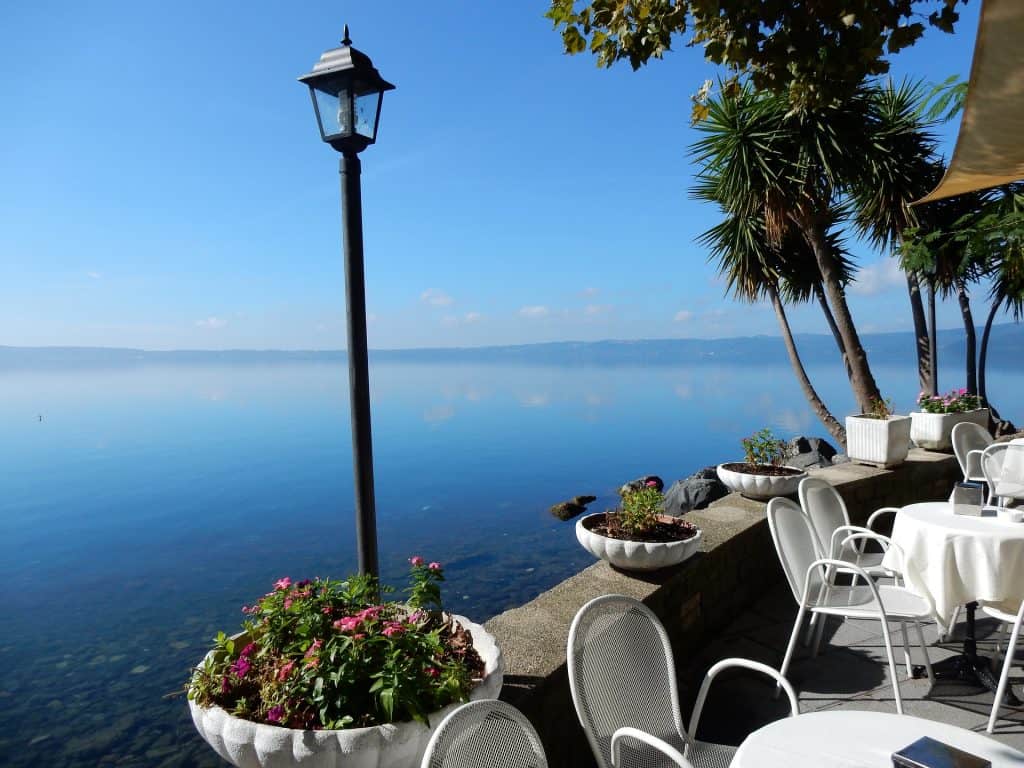 A day trip wouldn’t be complete without the perfect lunch! Bracciano will not disappoint; there are an overwhelming number of restaurants in the town centre and on the shores of the lake. Here are our recommendations to help you narrow down that list:

Ristorantino del Castello serves carefully selected local products, handpicked by the owner. As the proximity to the lake might suggest, the hero here is the fish. Try one the delicious pasta dishes on offer: the trofie with clams and pistachios or the paccheri with baby octopus.

La Fontanella is slightly outside the historic centre, but worth the little walk if you’re looking for good food for a decent price. A local gem serving everything from fish, meat, pizza and pasta, you’ll find something to suit everyone.

If lake views are your priority then head to Ristorante Alfredo da Persichella. This restaurant sits on the shore of the lake and boasts a large, beautiful outdoor terrace. The outside gets crowded, so try to book ahead. Although you’ll find almost everything on the menu, the fresh lake fish on offer is their speciality.

Bracciano makes a relaxing day trip from Rome with a perfect balance of history and nature.