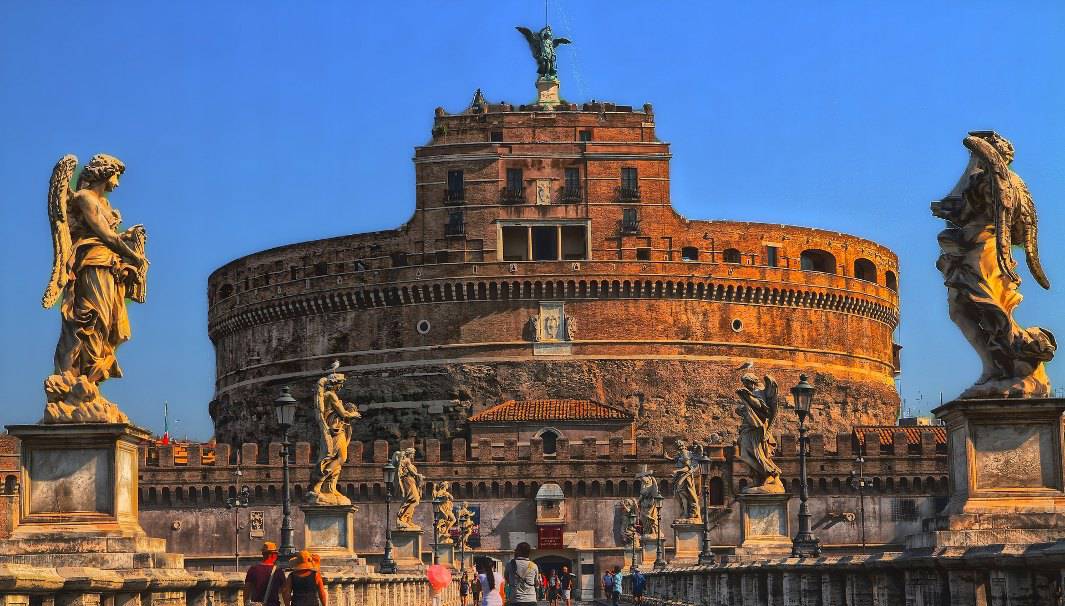 Castel Sant’Angelo is not your average castle, in both appearance and in its complex and fascinating history!

The castle is officially named the Mausoleum of Hadrian and was built between 134 -139 AD for the sole purpose as serving as the final resting place for the Roman Emperor Hadrian and his family. For the first few hundred years of its existence, Castel Sant’Angelo fulfilled its duties as a mausoleum and the remains of many succeeding emperors were also buried within the castle grounds.

Bust of the Emperor Hadrian at Castel Sant’Angelo
The side of the castle, showcasing its fortress wall
Bronze Statue of the Archangel Michael
A part of the Passetto which stretches between Castel Sant’Angelo and the Vatican

However, in 401 AD the building was converted into a military fortress to help strengthen Rome’s defenses against enemy territories. Because of this, it endured a multitude of attacks and many of its original statues and decorations (including the funerary urns containing the emperors) were lost or destroyed.

Interestingly, the castle took its present name well before it was actually turned into a castle! In 590 AD, a great plague swept through Rome, devastating the city. Legend says that when this epidemic was drawing to an end, the Archangel Michael appeared on top of the castle. Pope Gregory I took this as a sign, and renamed the building Castel Sant’Angelo (The Castle of the Holy Angel). Today, a bronze statue of the Angel stands in the apparition’s place.

Much later, in the 14th century, the Popes took charge and began converting the castle into, well, an actual castle! The castle was intended to be used as a refuge for the Pope if needed. In fact, one of the most interesting additions was the 800m long Passetto di Borgo in 1277, an elevated passageway that links the Castle to the Vatican City. In at least two instances, it was used to carry Popes to safety when the city was under attack!

While the Papal State had control of Castel Sant’Angelo, it served as a castle, a fortress and even a prison. Talk about a multi-function building! Many famous Italians were imprisoned within the castle walls, and executions were also performed in the castle courtyard! So, while it’s a place that has served many people well, these castle walls have seen an awful lot of bloodshed too.

These days, however, Castel Sant’Angelo is neither a tomb, a fortress, a prison or even a castle! It is a museum with an interesting cross-section of history and artefacts on display, and it also boasts some pretty stunning views of Rome! The castle today has five floors and in one visit you can explore both the prison cells and the beautifully decorated Papal apartments, as well as viewing a collection of ceramics, statues and weapons.

Arrange a Private Tour of Castel Sant’Angelo with one of our guides at What a Life Tours!