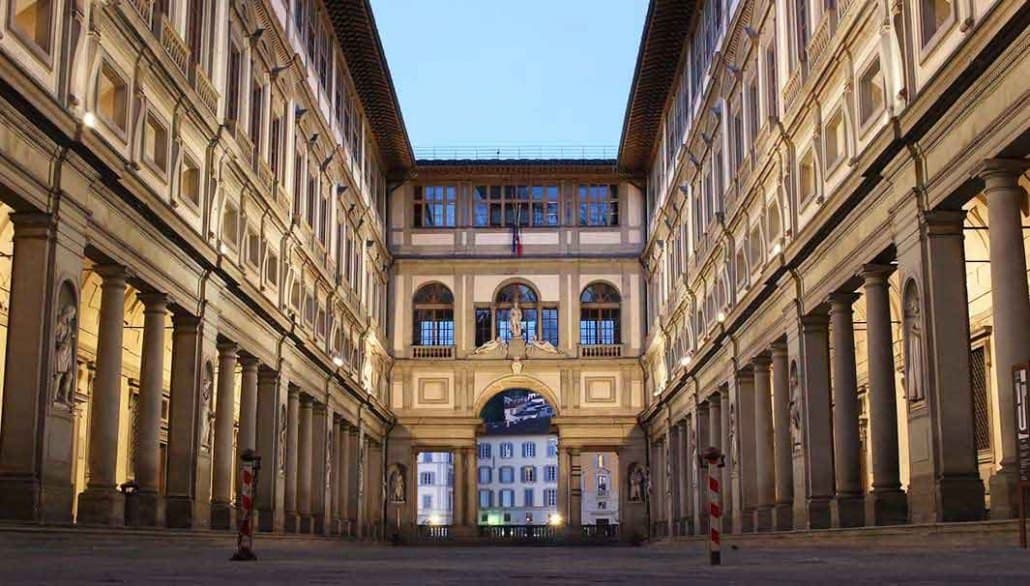 Florence, often referred to as the “Cradle of the Renaissance” is home to one of the world’s finest collections of art. At its heart is the city’s largest museum, the Uffizi Gallery, which is filled to the brim with an unbelievably vast collection of Gothic, Renaissance and Baroque masterpieces. With so many extraordinary works on display, picking our favorites was no simple task, so we’ve decided to organize the Uffizi Gallery highlights by artist, many of whom you are sure to recognize.

THE BIRTH OF VENUS & SPRING BY SANDRO BOTTICELLI 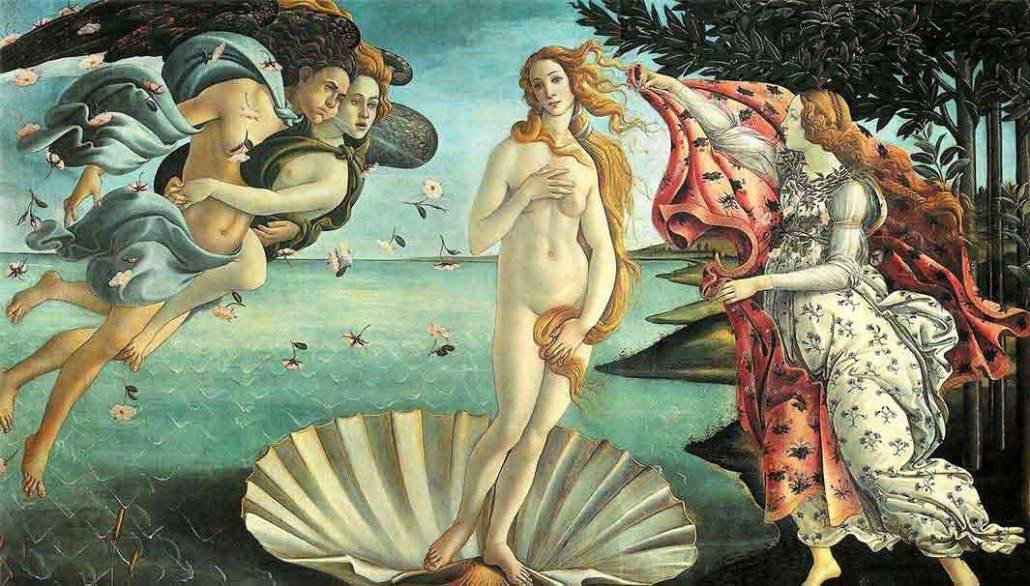 Botticelli (1445-1510) was an Early Renaissance painter who spent his entire life in his home city of Florence, with the exception of a few months in Pisa and a year working on the Sistine Chapel in Rome. His greatest works, which often depicted themes from Classical literature, mythology, and philosophy, were produced during his artistic peak in the 1480’s.

Botticelli’s Birth of Venus (1482–1485) is one of the most recognizable works of art in the world, and likely at the top of any art-lover’s Florentine bucket list. Contrary to its title, the artwork does not depict a birth but, instead, portrays Venus’ arrival on the Island of Cyprus. The nude female figure perches at the centre of an enormous shell, which is pushed to shore by the wind of Zephyrus and Aura (on the left). On the right, Spring takes on a female form wearing a floral dress while handing a protective shawl to the main subject. The wind element lends a fantastic sense of movement to the painting that is apparent in the rippled water, scattered roses, billowing fabrics, and flowing locks of hair.

The Allegory of Spring (1477-1482), another remarkable item in the Uffizi Gallery’s Botticelli collection, was painted just years before the Birth of Venus. Though the two are not part of any specific artistic series, they are often discussed together. Again, Venus is at the center of a natural landscape surrounded by Cupid, Flora, Mercury, Zephyr and others.

THE SOFT REALISM OF RAPHAEL’S BRUSHSTROKES 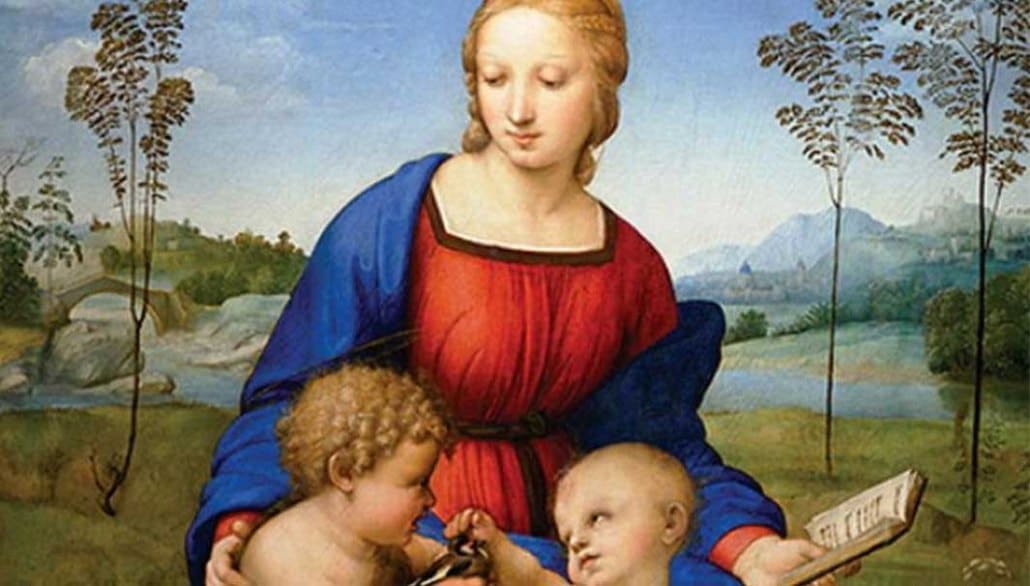 The Uffizi is home to Raphael’s Madonna of the Goldfinch, Leo X Portrait and a self-portrait

Raphael Sanzio (1483-1520) is known around the world as the young master of the High Renaissance. Though originally from Urbino, the artist spent much of his brief life in Rome. His style is often characterized by a deliberate inclusion of rich, vibrant colors and exceptional detail to human anatomy.

Raphael’s Madonna of the Goldfinch (1506), a stunning example of High Renaissance art, was commissioned by a wealthy merchant in celebration of his marriage. The painting was kept in the couple’s home until the building collapsed in 1547. Raphael’s painting was found in the rubble, broken into 17 pieces but was, fortunately, salvageable. The artwork depicts the Virgin Mary with Infant Jesus and John the Baptist as soft subjects in a tenderly balanced scene. Though the scene seems peaceful at first glance, hidden symbolism hints at a weary future. St. John holds a goldfinch as a symbol of Christ’s crucifixion while Mary’s open book reveals the prophecy of her son’s fate.

The Uffizi is also home to Raphael’s Portrait of Leo X with two Cardinals (1518), recognized as a freshly realistic, unpolished approach to a papal portrait, and Raphael’s Self-Portrait (1503-1506).

TITIAN’S SEDUCTIVE PALETTE & USE OF COLOR 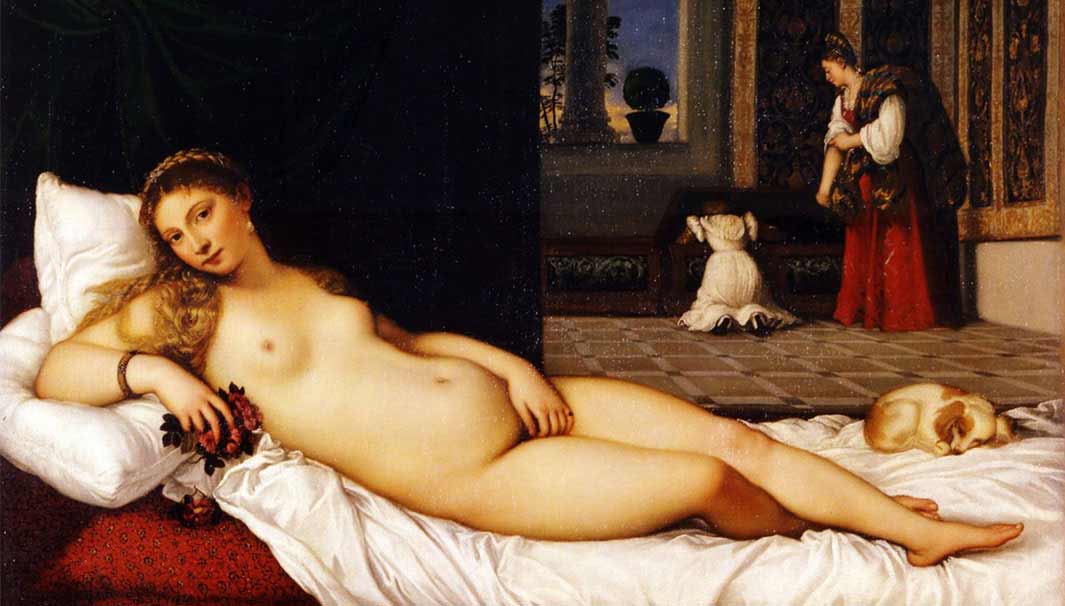 Venus of Urbino by the Venetian Master Titian

Tiziano Vecellio (1488-1576), known as “Titian” in English, was one of the great Venetian portraitists of the 16th century, highly sought after by the rich and famous of his time. Interestingly, his paintings were usually created with oil on canvas, as the moisture and humidity of the Venetian lagoon was not suitable for painting on wood.

Titian’s depiction of Venus Of Urbino (1538) was the very first of many reclining nude figures that would follow throughout history. This was not its only forward-thinking feature, though. Unlike previous portrayals of Venus, Titian placed the goddess in a modern home setting, complete with wooden furniture and a plush white bed and pillows. The piece is undeniably sensual, as the soft, fleshy subject seems to gaze back into the eyes of viewers. A sophisticated touch of symbolism lends a grounding balance to the piece, however, with a dog representing fidelity and an earring drop alluding to purity.

CARAVAGGIO, REBEL OF THE EARLY BAROQUE 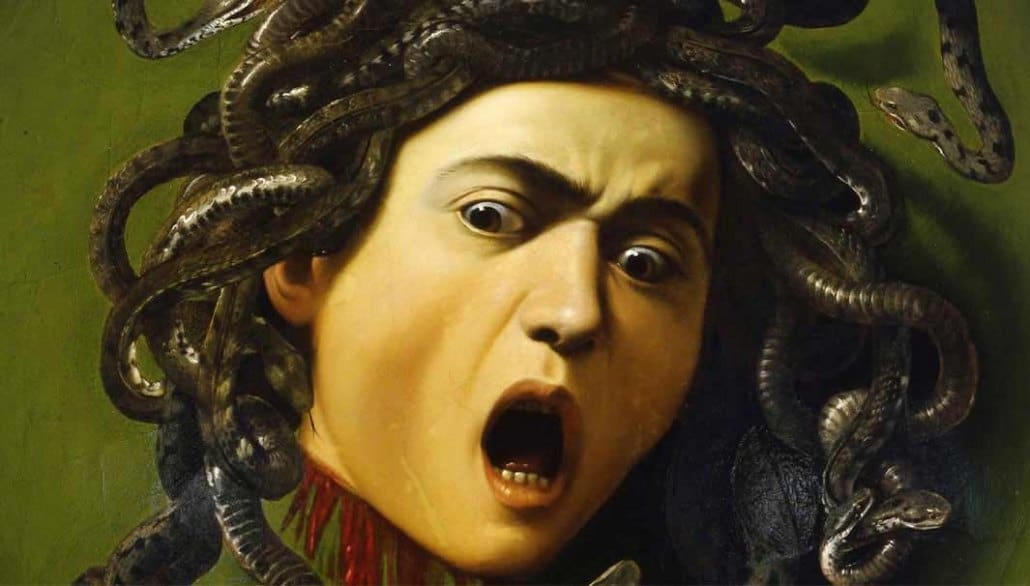 Michelangelo Merisi da Caravaggio (1571-1610), more commonly referred to as simply “Caravaggio”, was an exceptional Early Baroque painter from Milan. The artist was a pioneer of the dramatic “chiaroscuro” painting technique, which was characterized by intense contrast between light and shadows in order to highlight important subjects and symbols. He maintained quite the reputation as a “bad boy” of his time as well as a radical, and sometimes controversial, artist.

Caravaggio’s Medusa (1597-1600) is undoubtedly the most out-of-the-box concept on display in the Uffizi Gallery. The well-known mythological creature is painted on a round convex wooden shield, much like the shield responsible for her decapitation by Perseus (as legend has it). Caravaggio seemingly stops time at the exact moment of the gorgon’s defeat, with hyper-realistic features expressing nothing short of pure terror.

The Sacrifice of Isaac (1603) is another graphic contribution by Caravaggio. In this chilling biblical scene, Abraham is on the verge of killing his son, Isaac, until he is stopped by an angel who tells him to sacrifice a ram instead. The scene is dramatic, in light and expression, with an intensity that is oh-so-Caravaggio. To grasp the full scope of Caravaggio’s versatility, though, one should also spend a moment admiring Bacchus (1597), a portrait of the Roman God of Wine and intoxication relaxing, inebriated and inviting, behind a decadent pile of fruit. 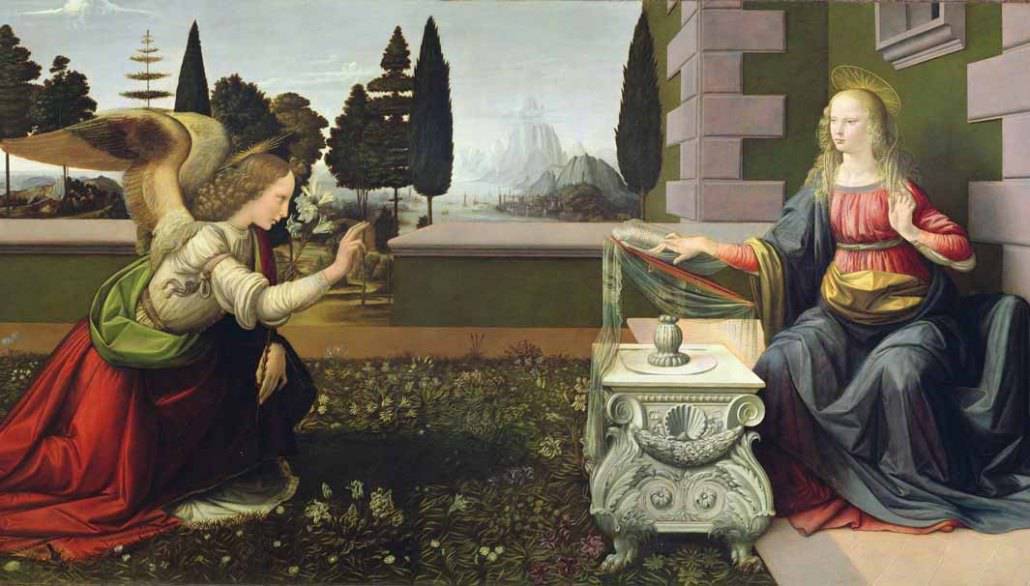 Science and religion live in harmony in Leonardo’s masterpieces

Leonardo da Vinci (1452-1519) was a brilliant artist and inventor in an era of science and discovery. Only 15 of the Florentine artist’s paintings exist today, the majority of which display religious scenes amidst natural and realistic settings. Some experts suggest that, at a time when religion and science began to contradict each other, da Vinci aimed to keep the two tied together.

The Annunciation (1472-1475) was one of da Vinci’s early works, completed when he was just 20 years old. His study of the popular Biblical scene was unique as it was set in an outdoor garden, rather than a traditional house. Another inclusion of nature can be seen in the angel’s wings, which were based on the anatomy of birds. The most impressive final touches, though, are the glimmering, golden highlights, which lend an overall glow to the piece.

For those who are curious about the artist’s technique, the Adoration of the Magi (1481) is an unfinished work that sheds some light on da Vinci’s painting process. 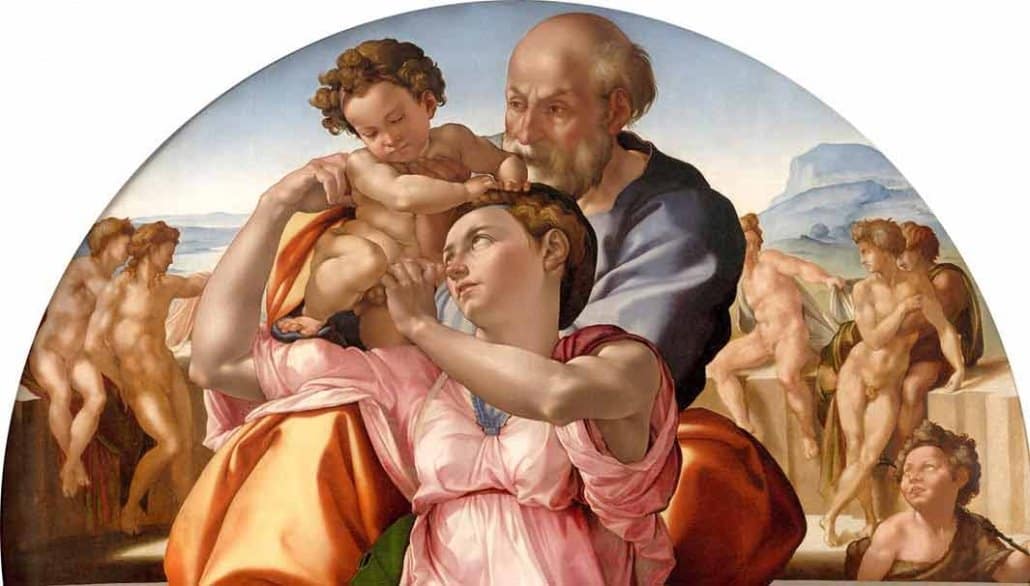 Michelangelo’s Doni Tondo is nothing short of exceptional

Michelangelo Buonarotti (1475-1564) of Florence is widely known as one of the greatest artists that ever lived. His long list of masterpieces ranges from marble sculptures and architecture to fresco paintings. With two years of research that included dissecting and studying the human body, the master portrays his artistic subjects with incredible anatomical accuracy. Rich colors, billowing fabrics, and life-like skin tones are also ever-present in his paintings.

Doni Tondo (1503-1504), also known as “Holy Family”, is Michelangelo’s only painting on panel and is displayed in its original frame. The religious artwork was commissioned by a rich banker called Agnolo Doni, which explains the name: “tondo” meaning round and “Doni” referencing its owner. The painting depicts the Madonna turning to take baby Jesus from Joseph’s arms, creating a circular flow that leads the viewer’s eye seamlessly through the colorful scene.

GIOTTO & THE ROOTS OF THE RENAISSANCE 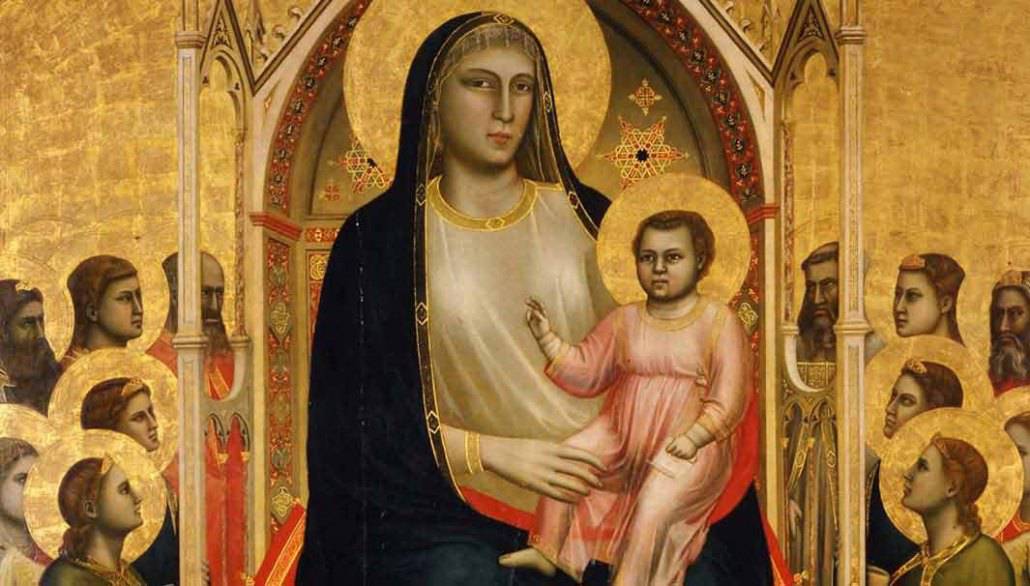 In the Late Middle Ages, Florentine painter Giotto di Bondone (1267-1337) was at the forefront of the Gothic movement in art. The artist pioneered a realistic painting style, which included the technique of drawing humans from life, rather than mimicking the more simplified representations of the past. This innovative approach added a relatable depth to religious scenes that would inspire artists for centuries to come.

Madonna Enthroned with Child and Angels (1310), or “Madonna Ognissanti” in Italian, was history’s first portrayal of the Virgin Mary as a real woman with a physical presence. While Giotto stuck with the traditional golden background of the Byzantine Era, he created a new and enhanced style with a captivating culmination of vibrant foreground colors, spatial depth and perspective. 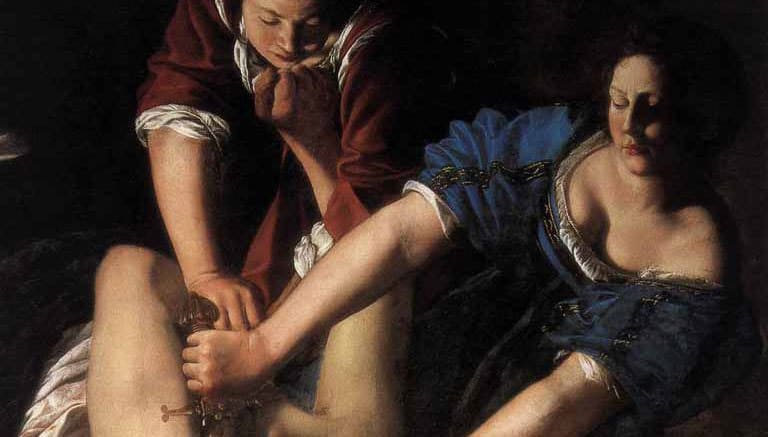 Artemisia Gentileschi (1593-1656), from Rome, was a famous Baroque painter of the 17th century. At a time when female artists were not well-respected, she had to work hard to earn recognition. Her painting style, much like that of her father Orazio Gentileschi, was clearly inspired by Caravaggio’s dramatic use of chiaroscuro.

Judith Slaying Holofernes (1620-1621) is so violent and gruesome that, for many years, it was tucked away in a dark corner. The biblical scene, in which the heroin is shown decapitating her despised enemy, was painted twice by Artemisia, the earlier version of which was completed in 1620. The scene is believed to have been a therapeutic focus for Artemisia, who painted herself in the role of Judith and her mentor-turned-rapist, Agostino Tassi, as Holofernes.

Although it’s hard to believe, we have only touched the surface of the incredible array of art within the Uffizi walls. In addition to our previously mentioned highlights, spectacular works by Parmigianino, Filippo Lippi, Andrea del Sarto, Rembrandt, Bambino Correggio, Fra Angelico, Piero della Francesca and more await you at Florence’s Uffizi Gallery. Join our Uffizi Gallery Tour for skip-the-line access with an expert guide to make the most of your visit!