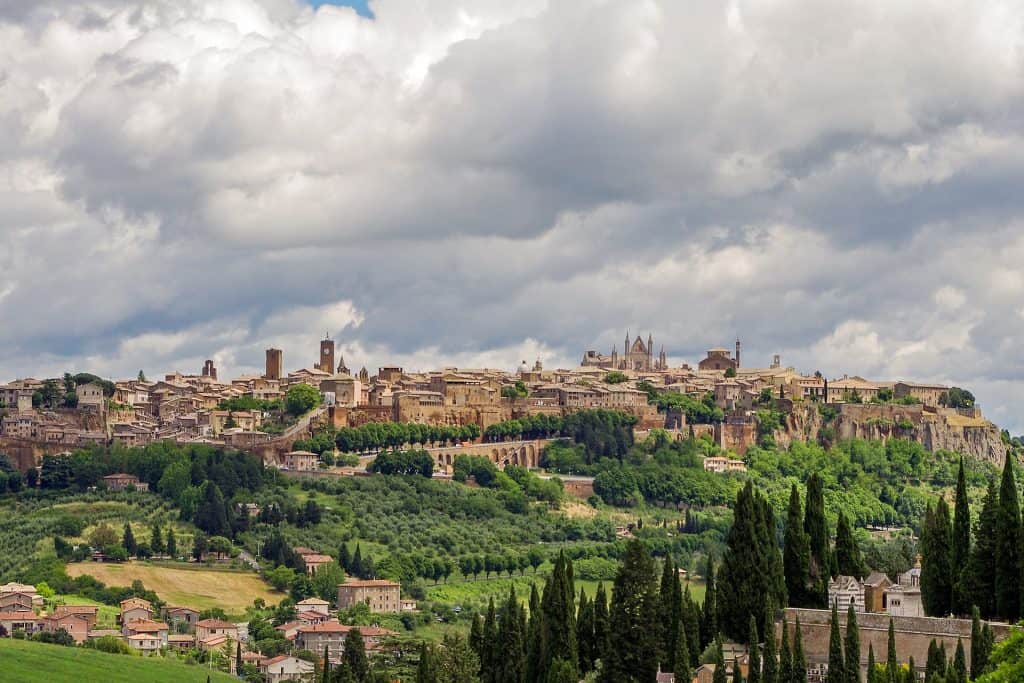 Located in Umbria, Orvieto is a stunning little town sitting on a volcanic rock. It is just a short train ride away from Rome, which makes it the perfect place for a day trip.

Trains leave frequently from Roma Termini, and if you choose the regional train you can pay as little as €7.50 one way (prices vary depending on the time and the type of train). You can purchase tickets from the Trenitalia website or directly at the station. Be sure to check the return train times to avoid unnecessary waits at Orvieto Station on the return leg.

Like many hilltop towns, the train station in Orvieto sits below the town. So, once you exit the station head across the piazza to the funicular station. The funicular runs every 10 minutes and will get you to the top of the hill in a matter of minutes. Tickets cost € 1.30 per person one way and are valid for 90 minutes.  The shuttle bus that runs from Piazza Cahen (the top of the funicular) to Piazza Duomo is included in the ticket price, but the town centre is an easy walk nonetheless. 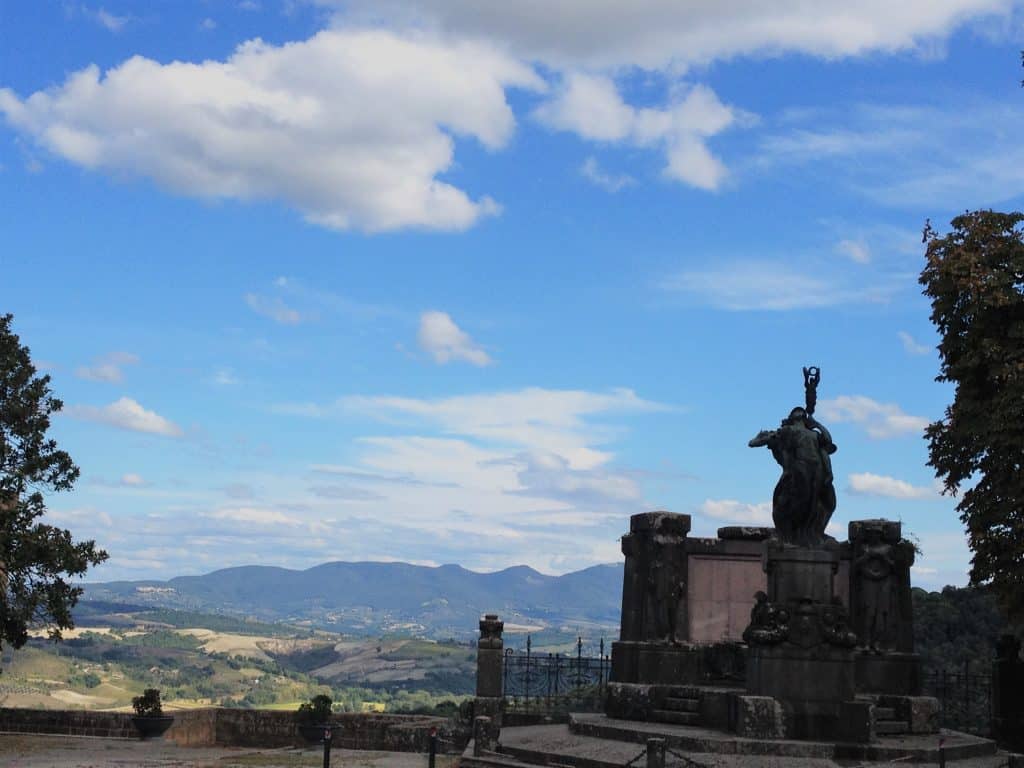 Orvieto has a rich history, its roots dating back to the Etruscan-era in the 9th century BC. It was an incredibly important city for the Etruscans as it served as not only the religious centre but the political centre for their people. This was probably because of its location, high on a cliff, and its strong fortifications which made it a safe place.

It was these strengths that made it virtually impossible for the Romans to conquer in the 3rd Century BC. In fact, it was the last city to give into the Romans and it took them two years to successfully invade Orvieto. The Romans exiled all the remaining Etruscans to the nearby colony of Bolsena. Orvieto was then used as an important site on the trade route to Rome, supplying food and wine.

The middle ages marked another important time in Orvieto’s history. It was a time of great splendour and expansion. Between the 11th and 14th centuries, it became one of the most powerful Italian cities and battled against neighbouring towns like Siena, Viterbo and Perugia, while forming an alliance with Florence.

Eventually, it became part of the Papal State and remained under church rule until the unification of Italy in 1861. 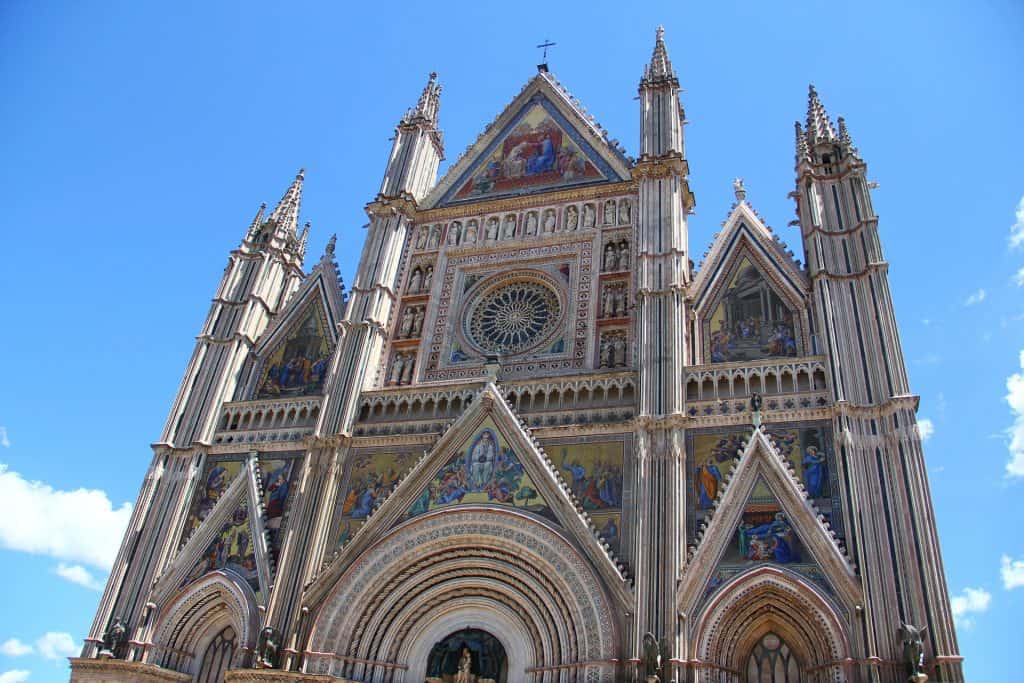 Orvieto today is a stunning little town. It boasts one of the most beautiful cathedral facades in Italy, a peaceful medieval town centre, as well as far reaching views across the Umbrian hills and valleys.

You could easily wander the town without any agenda, but here are some points of interest to help focus your day trip.

The most captivating part of Orvieto is its large Roman Catholic cathedral, dedicated to the Assumption of the Virgin Mary. Built in 1290, it is a marvel of gothic architecture. The facade alone is a colourful mix of mosaic, sculpture and stained glass. Its beauty will draw you closer from every vantage point in town. Why not grab a glass of Grechetto (a local white wine) from a bar next to the cathedral and soak it all in?

The town sits on top of a huge underground network of caves, tunnels, wells, cellars, cisterns and quarries which can be explored by guided tour. This vast and intricate network was built by the Etruscans for defensive purposes. The tunnels provided means of escape during an attack and led from the centre of town to exits at a safe distance from the city walls. The Museo Claudio Faina displays many Etruscan treasures that were uncovered in Orvieto and the surrounding area.

In Piazza Cahen, to the left of the funicular station, are the remains of the fortress. Started in the 14th century by the Spanish Cardinal Albornoz, it originally had a moat and a drawbridge.

Today, you can visit the public gardens within the defensive walls of the fortress and try to imagine the many battles that took place in Orvieto’s history.

Situated on Corso Cavour (the main street) this 47-metre high clock tower was built in the 13th century to help keep watch over Orvieto and its territory. Today, you can climb the tower for a few euros and will be rewarded with gorgeous far reaching views over Umbria, and a spectacular bird’s eye view of the city. Adjacent to the tower is the medieval Palazzo dei Sette (palace of the seven). It is named so because it housed seven judges who represented the main companies and trades in Orvieto.

Orvieto is full of gorgeous buildings and charming piazzas. Wander slowly through its winding streets and appreciate the beauty in every detail. The town also has a thriving artistic tradition that pre-dates the Etruscan presence in the area. So if you’re looking for something unique or handmade, you might just find it in Orvieto. 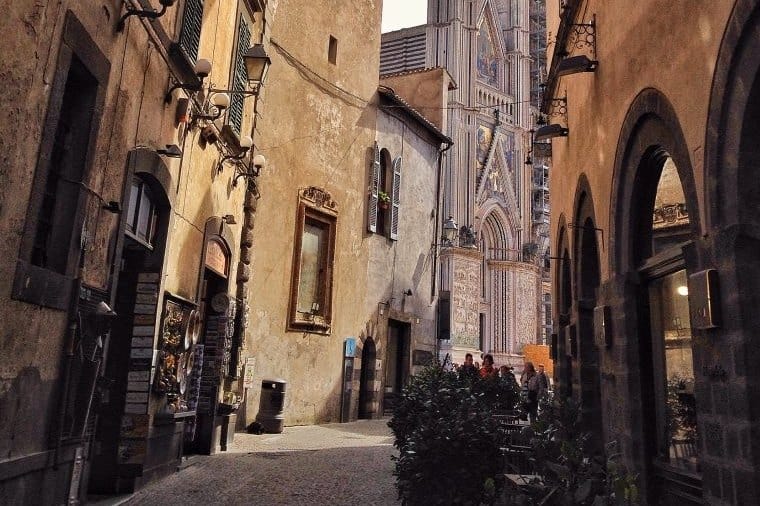 One of the wonderful things about Italian cuisine is that it is regional. Although Rome and Orvieto are only a short distance apart, the typical dishes in Umbria are vastly different from those in Lazio! Make sure you ask for the local specialities in both food and wine and you won’t be disappointed.

Located on a narrow street, off Corso Cavour, Trattoria del Moro Aronne is an unassuming family-run restaurant serving simple yet delicious local food. The staff are welcoming and will help you navigate the menu. Ask for their recommendations, but don’t miss a local delight; the Carbonara di fave e baffo (Carbonara with fava beans and bacon). Enjoy a leisurely meal and wash down your food with any of the delicious locally produced wines.

If you’re strapped for time or simply looking for a short break from exploring Orvieto, Antica Bottega al Duomo is the answer. A wine bar, a sandwich shop and a restaurant all rolled into one, there’s something for everyone. Grab a panino or one of their irresistible plates of cured meats and cheeses.

Orvieto is truly is a captivating little place rich with history, traditions, and an amazing selection of locally produced food and wine.