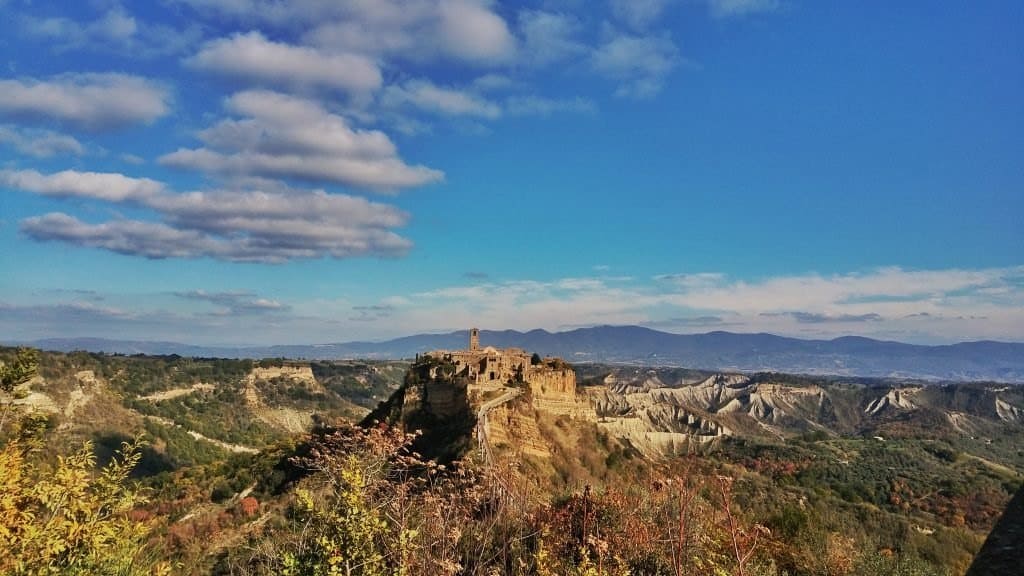 When you see Civita di Bagnoregio for the first time across the valley, you may need to rub your eyes in disbelief. Delicately balancing on a lone mountain in the midst of a vast valley, the village seems to lead an impossible existence. In fact, known to locals as ‘the dying city’, Civita di Bagnoregio is at constant risk of destruction. The threat of erosion to the edges of the plateau is imminent, which would cause the village to crumble. 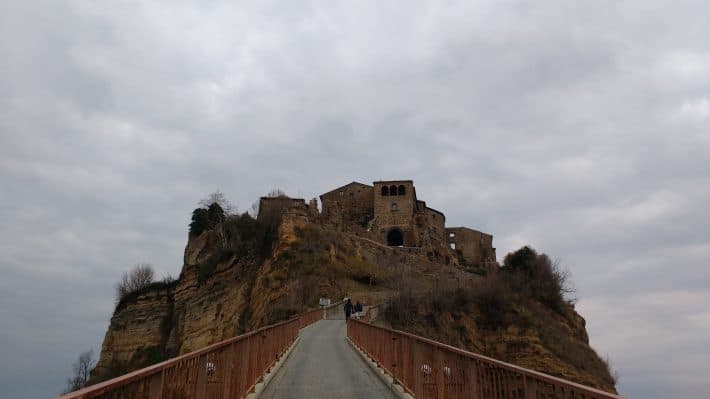 The easiest way to get to Civita di Bagnoregio is by car. From Rome take the A1 highway (autostrada) north, exit at Orvieto and follow the signs to Bagnoregio. If you don’t have access to a car, now’s the time to make friends with people who do!

The village itself is inaccessible to vehicles and visitors must park in the adjacent town Bagnoregio. Follow the yellow signs marked ‘Civita’ to reach the parking lot. There’s a charge of €1 per hour, or alternatively, you can park anywhere in Bagnoregio but you must pay the metered parking fee.

If going by car is an impossible feat, you can also reach the village by public transport (excluding Sundays). However, this option requires a lot more time and organisation. From Roma Termini take the train to Orvieto, and then connect with the Cotral Bus to Bagnoregio outside Orvieto train station. Be sure to check the timetable on the Cotral website, as buses are infrequent.

Once you arrive in Bagnoregio, the rest of the journey must be taken on foot. So make sure you’re wearing comfortable shoes!

After you’ve satisfied your eyes with panoramic views, descend the stairs to the base of the footbridge, and prepare yourself for a steep climb upward. 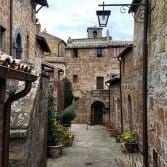 Civita di Bagnoregio has been slowly dying since the 16th century. Natural disasters have been the enemy since the beginning; earthquakes, landslides and even floods have threatened its survival. In fact, a major earthquake in the 17th century is what caused the government to relocate the town to Bagnoregio, turning Civita into a ghost town.

Due to its isolation, the village’s architecture has remained mostly unaltered since its conception. Stepping foot through the entrance, a stone passageway that was carved by the Etruscans 2,500 years ago, will transport you back in time to an interesting cross-section of Etruscan, Roman and Medieval life. 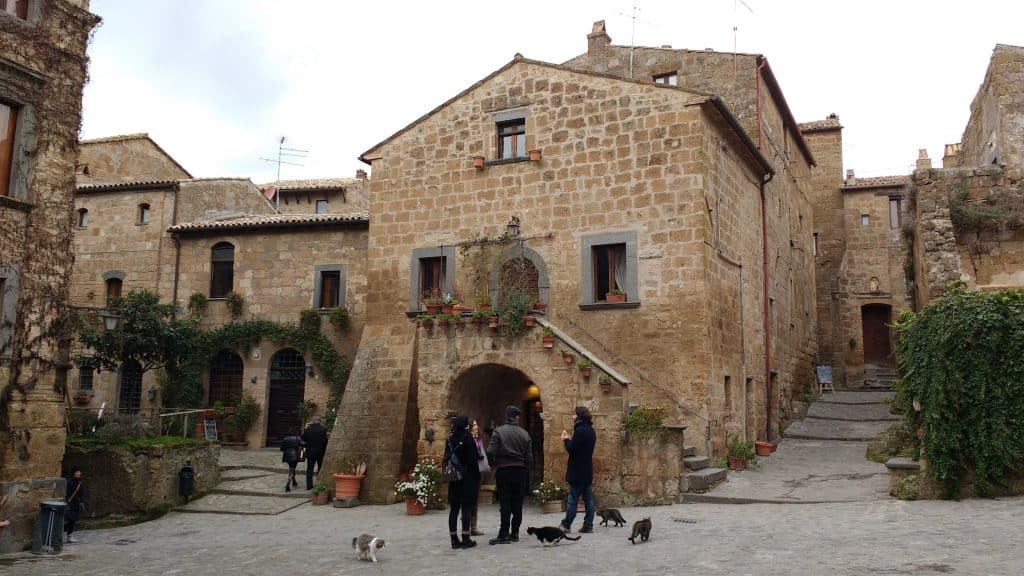 As you might expect, the list of things to do in a small, dying village is not exhaustive. However, aside from leisurely strolling the streets and marvelling at the architecture and views of the valley, there are a few points of interest. The only remaining entrance to Civita tells an interesting story. Cut from the rock in the Etruscan period, it was renovated in the 12th century to add a gothic arch. On either side of the arch, there are two reliefs depicting a lion holding a human head between its claws. These were placed in memory of the battle of Civita against the Monaldeschi family of Orvieto in the 15th century, in which Civita was victorious.

Standing in the main piazza, this church was built in the 17th century, on top of a pre-existing Roman temple.

A simple, yet well-preserved church, it houses the bones of St Ildebrando, a local 9th-century bishop, as well as a precious 15th-century wooden crucifix. Adjacent, stands an 8th-century bell tower, displaying two vastly different moments in time, standing side by side.

A Renaissance Palace turned museum. All that remains of the old palace is the facade, unfortunately, the rest of the palace collapsed into the canyon long ago.

Today, what’s left of the building houses the Geological Museum of Landslides which showcases the history and the struggle of the village’s survival.

A stunning private garden at the end of the village, you can gain entrance by donating a few euro, or by promising to purchase any of the small trinkets or food items for sale. The garden, composed of two levels, boasts spectacular views over the valley, as well as providing a colourfully curated break from the village.

Long before it battled with natural forces, Civita di Bagnoregio was an important city during the Etruscan era due to its location along the trade routes.

A series of Etruscan caves still stand at the edge of town, so if the views and the architecture don’t satisfy you, explore the caves for a different perspective. 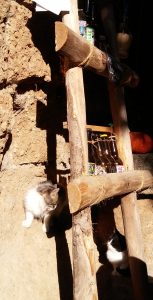 For a dying village, there’s no shortage of places to eat. But, that’s Italy for you!

If you’re looking for a fine dining with the ambience to match, try Alma Civita. Tucked away into a tiny alley, this restaurant has two levels; the bottom carved into a cave which doubles as the wine cellar. The food is artfully presented and is comprised of fresh and seasonal ingredients.

However, if you prefer a more casual lunch break, don’t miss L’Arco del Gusto. The name translates to ‘arc of taste’, and it’s spot on! Hidden under one of the village’s arches this hole in the wall artisanal deli is full of flavours. As well as offering cured meats and cheeses in abundance, they make fresh focaccias filled with a variety of delicious meats, cheeses and spreads. Choose one off the menu, or build your own.

The seating is all outdoors, and you’ll have to battle a few dozen cats, but it’s worth it! If you’re craving something sweet, and you are a firm believer that cheese should be eaten at every available opportunity, don’t pass up the ‘ricotta a gelato’. It’s a heavenly combination of fresh ricotta, honey and cinnamon.

Untouched by the modern world, Civita di Bagnoregio is a truly unique and fascinating way to spend a day.