Home > Blog > Celebrations for the Birthday of Rome 2022

Ceremonies for the Birthday of Rome, 2022 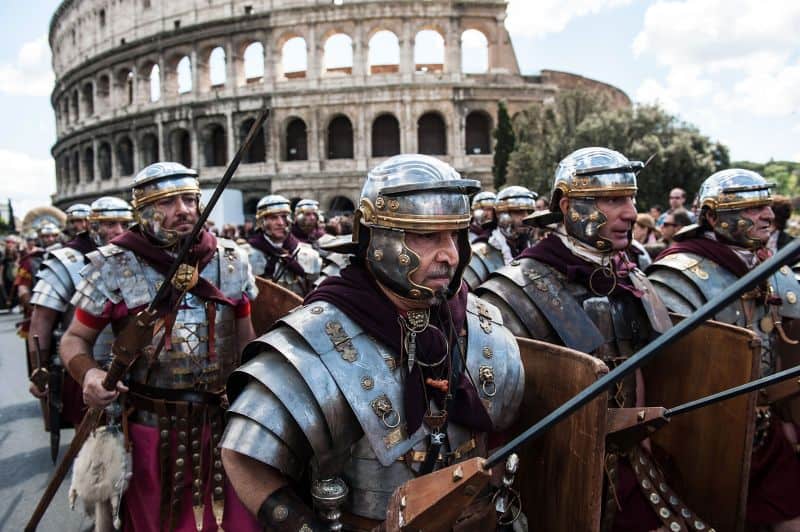 Here we are. An opportunity to watch over the course of a couple days, the celebrations into the 2775th Birthday of Rome. After two years of cancelations and procrastinations with a series of frustrating limitations, the week evolving around April 21st will flare up with a series of special commemorations and reenactments. It’s only done during this time of the year, as a result, consider this special. 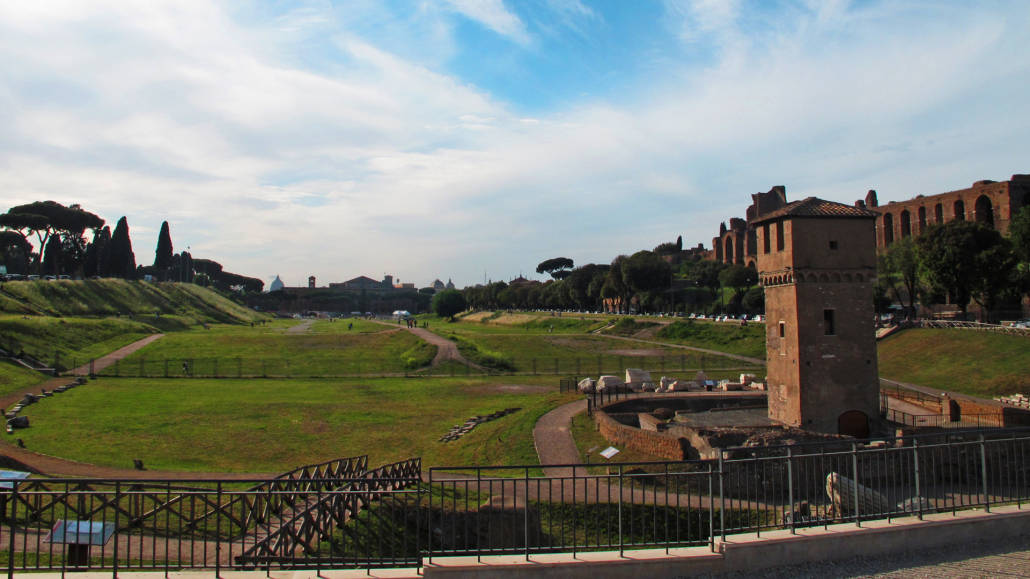 The anniversary of the Birthday of Rome will focus especially at the Circus Maximum and adjacent sites. While structurally the gigantic circus came at a later stage, the site is geographically as close as possible to the origins of the Eternal City. It also allows for space, indispensable to enjoy the show and relive, even if shortly, this great city.

9 am to 4 pm – At the Circus Maximum, a series of stalls will be mounted each one displaying a topic regarding Ancient Roman culture (among which are clothing, mosaics, gladiators, military, fighting techniques.)

9:30 am – Emperor Hadrian will conduct, as Maximum Pontiff, a religious ceremony at the Republican Forums.

3 pm – Ceremony at the Circus Maximum, reenactment of the foundation of Rome, where the original

4 pm – Ceremony ( “Le Palille”) where the six Vestal female priests will participate always at the Circus Maximum. It regards an ancient religious event where the Goddess Pales was celebrated to propitiate protection and fertility of herds and produce. 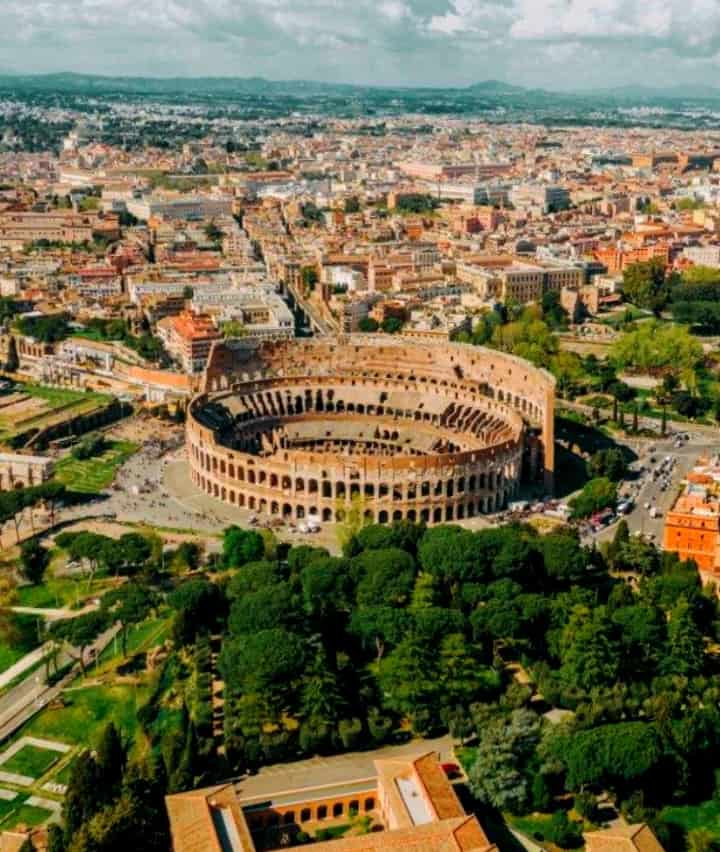 Above the ColosseumOn Saturday instead, there is a particular game a group of selected athletes will play: ancient Roman Soccer!

It’s called Harpastum and it will be staged at the Circus Maximum at 5 pm.

Little is really known about the game, probably it wasn’t so far from Florentine soccer and probably had something in common between rugby and American football. It was certainly a physical game. Sources indicate an abundance of injured players and also spectators (now that’s got to be a real show!). How in the world spectators could get involved might have something to do with the absence of walls or protected sidelines so, as a result, body slamming must have been part of the game as well.

Naturally, the reenactment is not meant to become some sort of boxing match so we are sure the players will simply have fun and anyone of you who would like to be there will not end up in some ancient Roman infirmary! 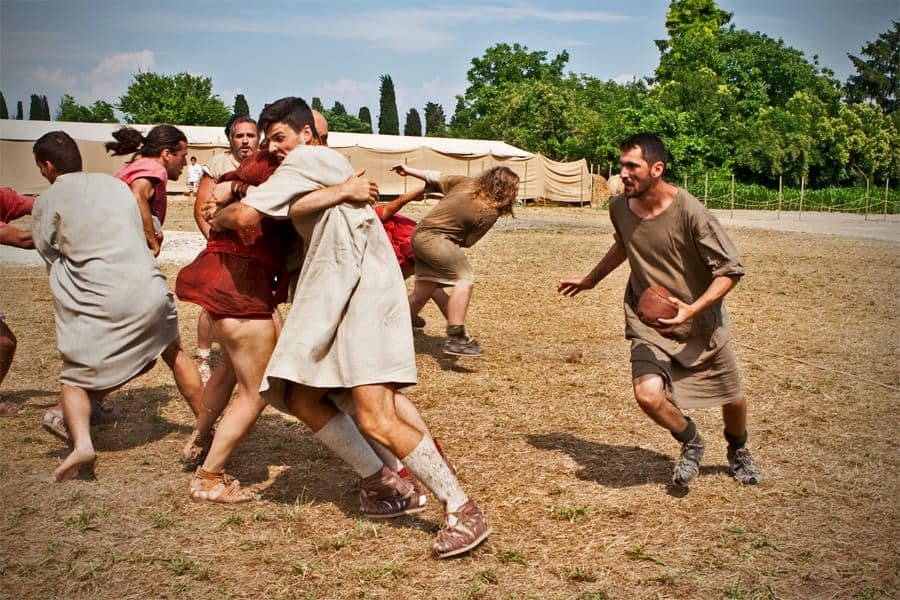 Sunday will host the traditional procession with men and women in full ancient Roman gear, walking down an imaginary ring which is made by the main streets in the city center, all rotating around the forum. There are going to be about 2000 participants, divided in 40 groups.

10 am – Mecenate will hold a lenghtly oration along the forums, like Cicero, he was a blabbermouth but never made mistakes and could hold monologs for great lenghts of time.

10:30 am – At the Circus, the local authorities will participate in the usual quick delivery of messages before the procession starts.

11 am to 1 pm – The procession begins and will proceed on to the main roads. Awaiting final confirmation but the procession should start at the Circus and move by the Theater of Marcellus, Piazza Venezia, the Forum, Colosseum, Via Celio Vibenna and Via di San Gregorio. From there back to the Circus at about 1 pm. Details of the itinerary must still be determined.

Upon completion of the procession, always at the Circus, music bands will play typical ancient Roman tunes and hymns followed by other smaller demonstrations always by our great impersonators.

Pending confirmation, the last show should be a reenactment of the Battle of Medway, Kent, in England, where the Roman troops of Emperor Claudius landed in 43 AD, beginning their campaign in Britain. 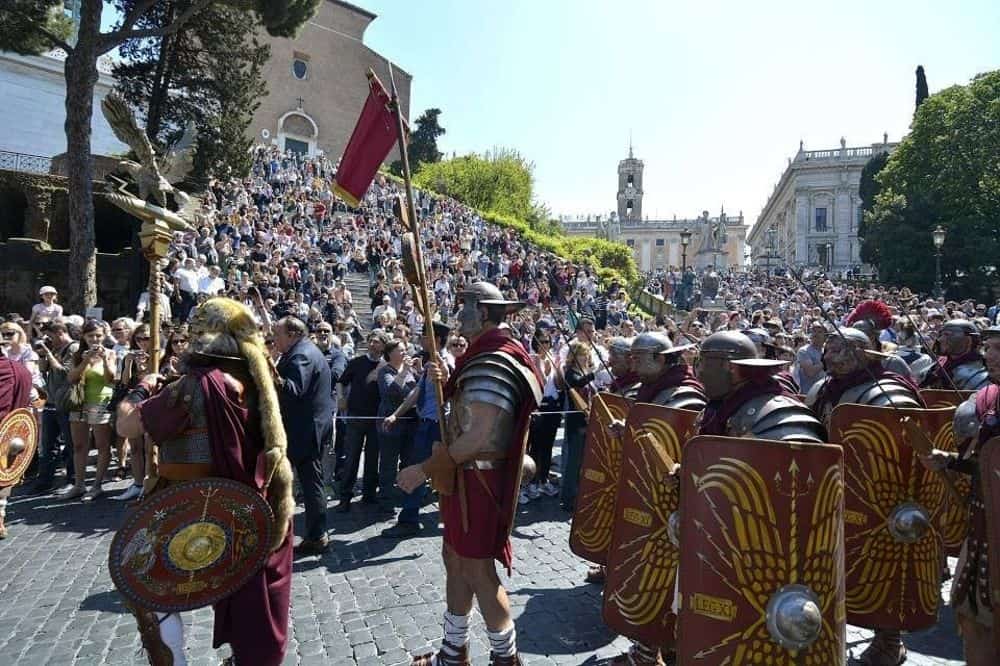 The reenactment will be performed by actors from various countries. After two years of restrictions have meant deferral, emotions are wildly charged, consequently, we can expect a great deal of enthusiasm. As mentioned, credibility is important to render the idea of what ancient Rome must have been so, as a result, a fake roman structure, similar to a fortress, will be installed in the Circus. That is where these shows will take place. They are for free and no bookings are required.

The group conducting these beautiful rendition is called “Gruppo Storico Romano”; they are involved also in other reenactments on special occasions. The following link offers a recap as well of the events and some photos you can freely look at to get an idea of how it looks.

Well, certainly there is a lot you can go see. If you happen to tour the Forum around this time, you can hop over to the Circus where the action is taking place.

Remember the previous blog. You can add the Pantheon, the Colosseum, the Forum and the Vatican Museums to your touring week, depending on how much time you have available to you.

April 21st is a local Roman festivity similar to a Sunday. It doesn’t constitute an issue but a few streets might be closed off to traffic so if you have appointments you might want to add some extra time for slower transportation.

April 25th, a Monday, is a national holiday. It is the feast remembering the Liberation of Italy from Nazi-fascist forces in the Second World War. Therefore, while monuments remain open, there are possibilities of demonstrations, sit-ins, and commemorative events. We suggest you monitor the local transportation website for planned and real-time limitations:

This blog serves more an idea, suggestions about what you can do during this special week but we are here to offer assistance so that you can use your time the best possible way. For more information or to arrange a tour, check out What a Life Tours or contact us by phone at +39 06 88975757/+ 39 334 7273299 (WhatsApp), or simply email us at info@whatalifetours.com!