Home > Blog > The Baths of Caracalla

The Baths of Caracalla 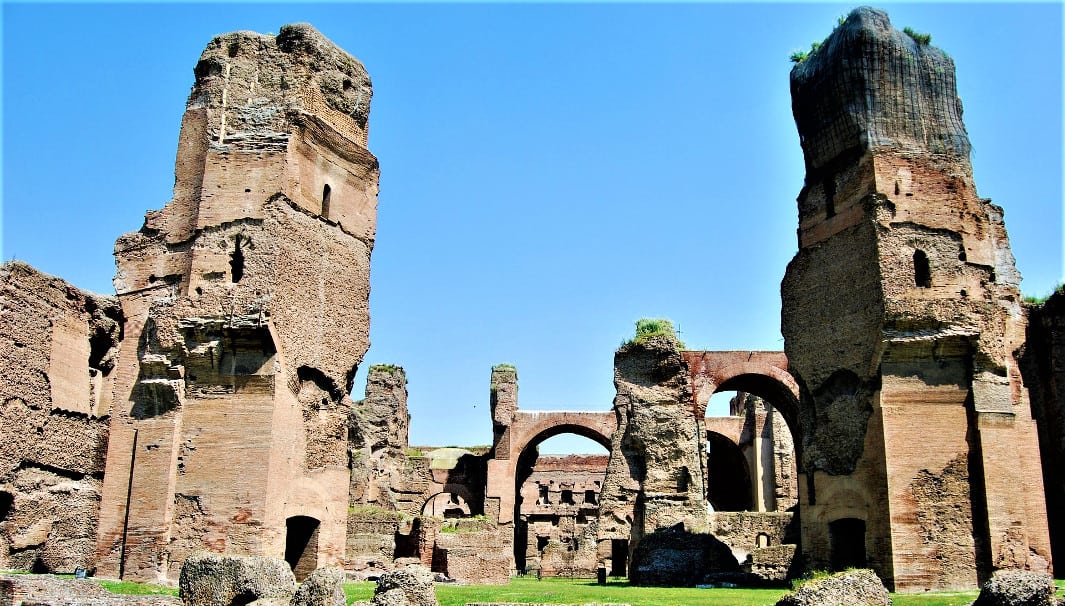 The baths of Caracalla (Terme di Caracalla) were Rome’s second largest public baths. Emperor Septimius Severus initiated their construction in 206 AD and they were completed by his son, Emperor Caracalla in 216 AD. They remained in steady use until about 530 AD and then slowly fell into ruin over the next few hundred years due to damage sustained by wars and earthquakes.

In their peak, the baths were incredibly popular and had the capacity for 1,600 people simultaneously, though daily numbers were between 6,000 – 8,000! Aside from bathing facilities the complex also held multiple gyms, open air swimming pools, two libraries (one Latin and one Greek) a plethora of shops and vast gardens. The whole complex covered approximately 25 hectares (62 acres)!

Unlike modern spas, Roman baths were completely free, and most Romans attended the baths every day! This was because they lived in crowded quarters without running water or sanitary facilities. The baths were not a luxury, but rather a necessity. Not only were the baths a place to bathe and relax, but they were a place to socialize and also conduct business. 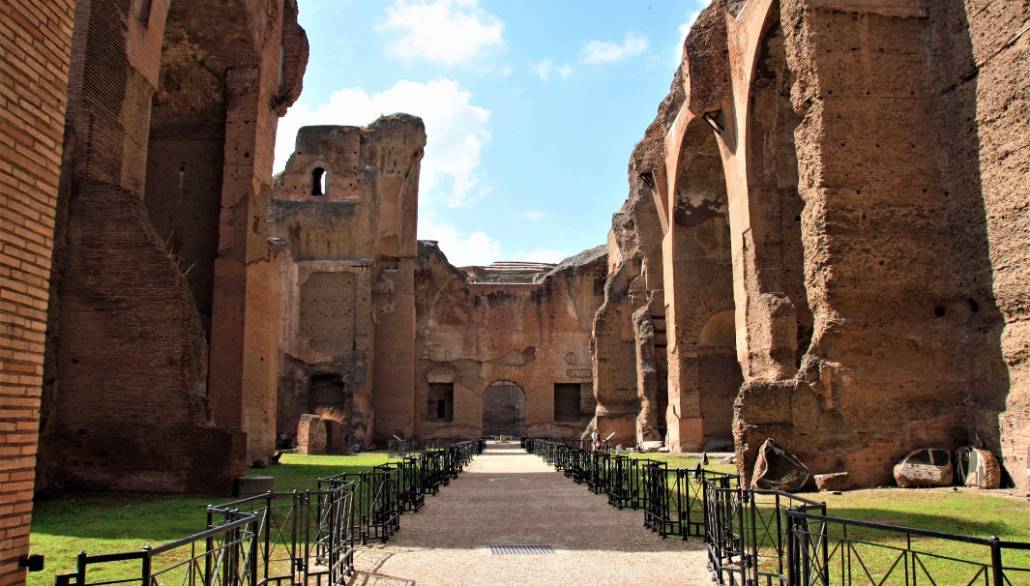 The interior of the baths today https://www.flickr.com/photos/christine-wagner/26843563133

Bathing in Ancient Rome was an important affair. There were several bath chambers; the tepidarium (the lukewarm room), the caldarium (the hot room) and the frigidarium (the cold room) and there was a specific order in which bathers attended each room. Not unlike modern day spas, the first port of call was the Apodyterium (the changing room). However, there were no lockers to store belongings, instead they were watched over by a servant. If the visiting Roman didn’t bring someone to guard their clothes, they could hire someone on site!

A visit to the baths normally started with a workout. The Romans would visit the outdoor gym, but before exercising they would apply oil to their body. After the gym the bathing began. It started in the frigidarium with a cool off in the cold plunge pool. Then, onto the slightly warmer tepidarium, and finally the caldarium to sweat out the toxins. The caldarium was a bit like a modern day sauna complete with a hot tub! It could reach temperatures of 38°C (100°F) with 100% humidity, so if you’ve survived summer in Rome you could have survived the caldarium! Then, it was back to the tepidarium again for a scrub, or rather a scrape clean. A servant would use a special tool to scrape the oil and dirt off the body of the bather. Sometimes this service included a massage. Finally, it was back to the frigidarium to close the pores and cool down! 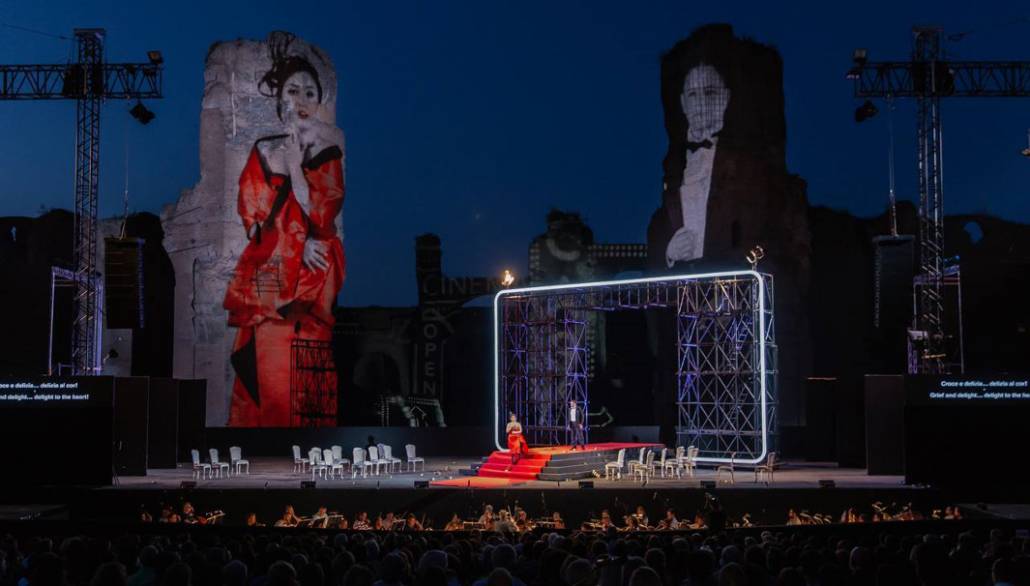 A scene from La Traviata (Giuseppe Verdi) at the baths of Caracalla https://www.facebook.com/operaroma

The baths of Caracalla remained a buzz of activity until the 6th century when during the Gothic wars in 537 AD the water supply to Rome was cut off. With no water, there were no baths. Therefore, the baths fell into disrepair and were used for a number of different purposes. In the 7th century, the grounds were used as a cemetary for pilgrims who died in the nearby hospital of Santi Nereo ed Achilleo. In the 12th century the baths were used as a quarry for construction materials to be used in churches and palaces over Italy. The 14th century saw the complex being used as a vineyard, and even a playground for children!

Excavations began in the 19th century and put an end to the extreme repurposing of the baths. The complex is now an archaeological site worth visiting! Tickets cost €8 and the site is open every day, though opening hours vary. Visit the website for more information.

For something truly special, visit the baths during a summer evening to see an opera, ballet or concert under the stars. Further information can be found here.

Bus: 118 from the Colosseum, 628 from Appia Nuova or Lungotevere 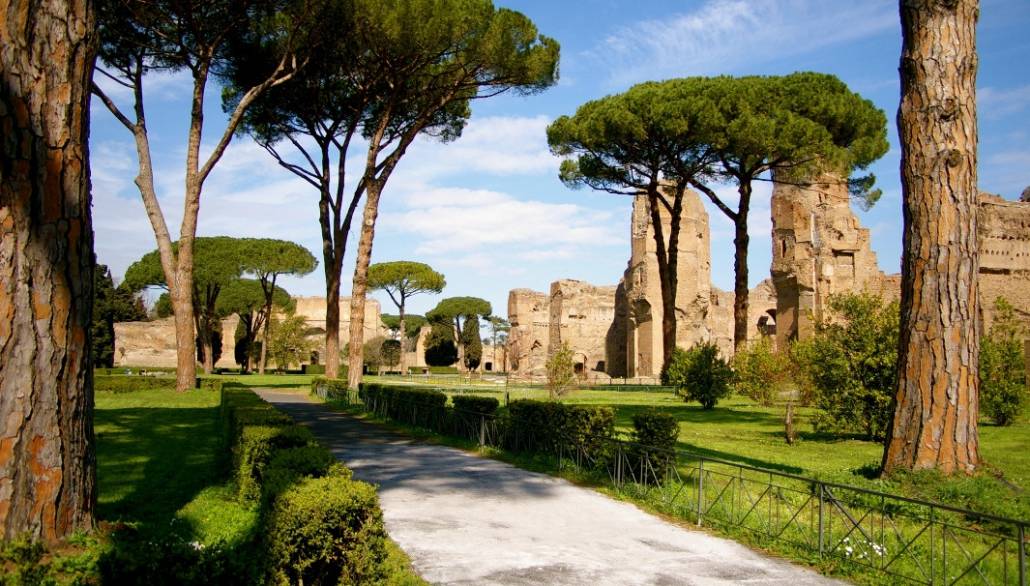