The Life & Art of Michelangelo Buonarroti

Who Was Michelangelo Buonarroti?

Michelangelo di Lodovico Buonarroti Simoni was a true rock star of the Renaissance who is recognized around the world by his first name alone, even centuries after his death. In his lifetime, the Italian sculptor, painter, and architect was often referred to as “Il Divino”, or “The Divine One”, with truly miraculous talent, tenacity and vision. Today, he is widely regarded as one of the greatest artists that ever lived.

Florence, the cradle of the Renaissance and Michelangelo’s hometown

Michelangelo was born on March 6, 1475 in the small Tuscan town of Caprese and moved to Florence with his family just a few months later. He lived in Florence until the age of 6, when his mother fell fatally ill. At that time, Michelangelo was sent to Settignano to live on his father’s marble quarry with a nanny and her stonecutter husband. This is where Michelangelo began to develop a taste for sculpting, but no one could have foreseen what a prolific sculptor, painter, architect, and poet he would later become.

In the late 15th century, Michelangelo was sent to Florence to study grammar, but he took a much greater interest in the recent artistic upheaval that had taken hold of the city. Wealthy patrons had commissioned countless works by great artists like Brunelleschi, Giotto, and Donatello. Michelangelo spent much of his free time studying and copying these artists’ works until, at the age of 13, he was taken on as an apprentice to Domenico Ghirlandaio, a master fresco artist who had recently painted the walls of the Vatican’s Sistine Chapel.  Within one year’s time, Ghirlandaio was persuaded by Michelangelo’s father to begin paying the 14-year-old for his work.

The Teenage Talent of a Genius

In the late 1400s, the Medici family was pressing on for an inspired artistic Renaissance, and they did so not only by commissioning existing artists but by enabling the education of future artists as well. When Lorenzo de’ Medici asked Ghirlandaio for his best pupils, the artist sent Michelangelo and Francesco Granacci to the Medici’s Humanist Academy in Florence. During his 2-year residency, Michelangelo sculpted “Madonna of the Steps” and “Battle of the Centaurs”.

When Lorenzo de’ Medici died in 1492, Michelangelo was forced to return to his father’s house, but he would not give up on his artistic endeavours. Desperate to continue his creative journey, he carved a wooden crucifix as a gift to a church which, in turn, allowed him to perform anatomical studies with cadavers in their hospital. Michelangelo’s sculpting work improved dramatically, catching the attention of Piero de’ Medici, who commissioned the artist back into the court of the Medici in 1494. It was bad timing, though, as the Medici’s were soon expelled from Florence due to intense political turmoil. For the next 2 years, Michelangelo would spend time in Venice and Bologna creating a number of sculptural works until finally making his way to Rome.

An Early Impact in Rome

Michelangelo arrived in Rome on June 25, 1496 at the age of 21. Although his first commission was considered a flop, in 1497 the artist was assigned a project that would elevate his reputation forever. At the ripe age of 24, Michelangelo presented the world with one of his greatest masterpieces, “The Pieta”, perhaps the most iconic image ever created of the Virgin Mary mourning over the death of her son with his body in her arms.

By 1499 the political situation had simmered in Florence and Michelangelo was called upon to create a large statue for a high niche in Florence Cathedral. He was allotted a 40-year-old, twice-discarded chunk of Carrara marble, from which he created his colossal 17-foot-tall statue of “David”. When he presented David to the consul in 1504, they unanimously decided that the incredibly detailed sculpture would be wasted in a high church niche and, instead, located it in the Piazza della Signoria, where every member of the community could admire it.

While working on David, Michelangelo also excelled with the paintbrush, completing notable works like the “Battle of Cascina”, “Doni Tondo”, and “Madonna and Child with John the Baptist”. 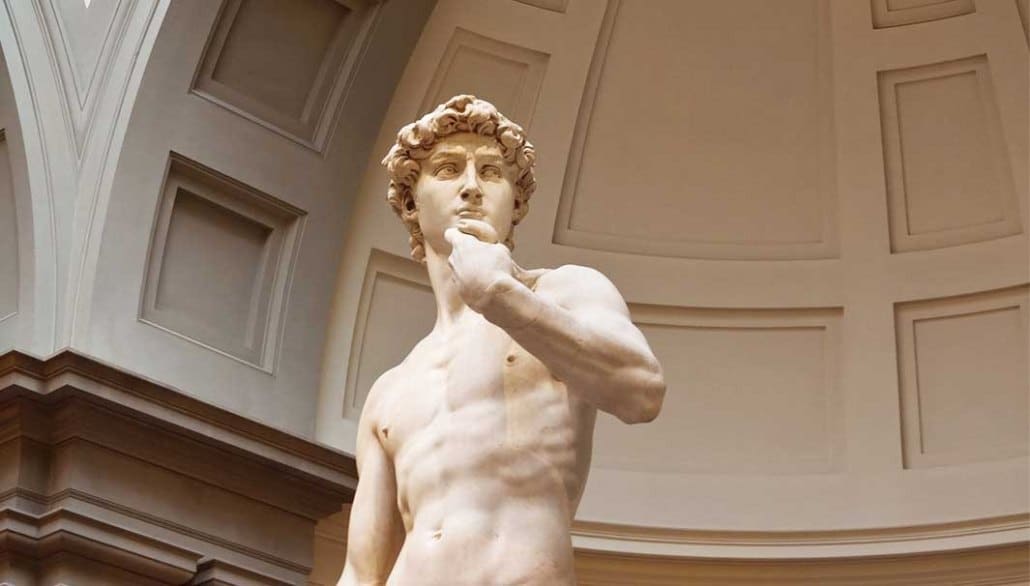 Michelangelo’s Heads Back to Rome Again

In 1505 Michelangelo was invited back to Rome by Pope Julius II, who commissioned Michelangelo to build his extravagant tomb. For over 40 years, Michelangelo worked to complete the 40-statue-project but was continually interrupted by other assignments. Though the artist was never able to complete the plan, the central figure of Moses is one of his most notable sculptural works, located in the Church of San Pietro in Vincoli.

In 1508, Michelangelo was commissioned to paint 500 square meters of ceiling in the Sistine Chapel. Having little experience with the fresco technique, the artist tried to refuse the invitation, but Pope Julius II made it clear that it was more of a command than a request. So, Michelangelo got to work. He studied the art of fresco and created the ceiling’s complex design, which utilized 300 figures to represent the Creation, the Fall of Man, the Promise of Salvation and the Genealogy of Christ, before devoting 4 years executing the task.

During this time, Michelangelo spent day and night on scaffolds with his back arched like a bow. With incredible determination, thorough precision, and incomparable creative skill he completed the world’s most prized masterpiece: the Sistine Chapel Ceiling. 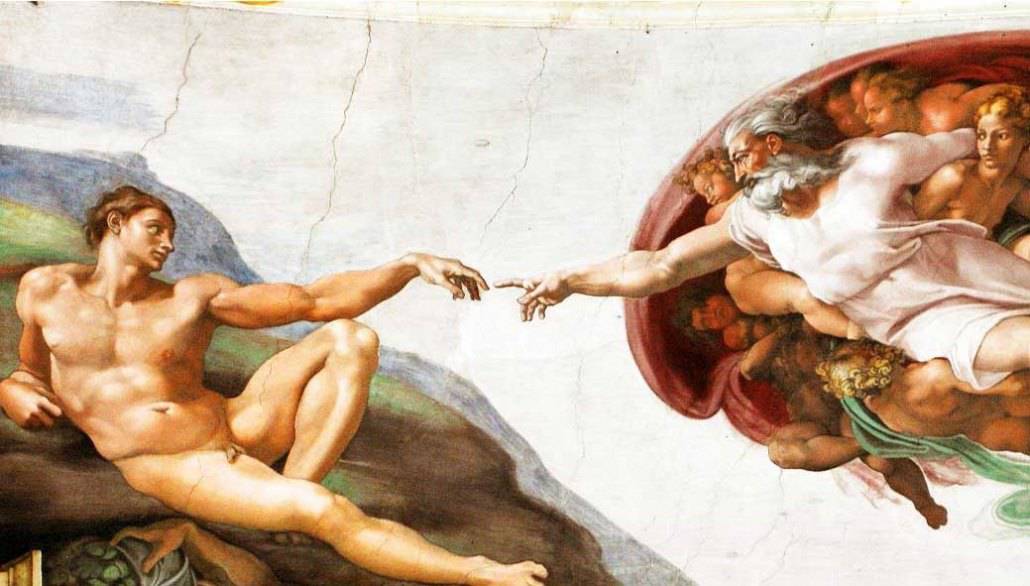 Michelangelo’s Complicated Relationship with the Medici

As the greatest art patrons of the time, the Medici’s were always eager to commission work by the top artists. As Michelangelo had officially made a name for himself as one of the best, Pope Leo, a member of the Medici family, sent Michelangelo back to Florence, where he would contribute to the family’s funerary chapel in the Basilica of San Lorenzo. Through the 1520s and 1530s, the artist devoted much of his time to the Medici Chapel, which includes allegories of “Night and Day” and “Dusk and Dawn”, in addition to his “Medici Madonna”. Later, he would design the interior and vestibule of the church’s library as well.

From 1527 to 1529 the political situation in Florence was rocky, as the Medici had been overthrown and the Republic was restored. As a loyal man of his city, Michelangelo spent these years working on the city’s fortifications in support of the Republic. Unfortunately, this didn’t help his favour with Alessandro Medici, who became the first Duke of Florence in 1530. Fearing for his life, Michelangelo fled Florence and, once again, found himself in Rome. 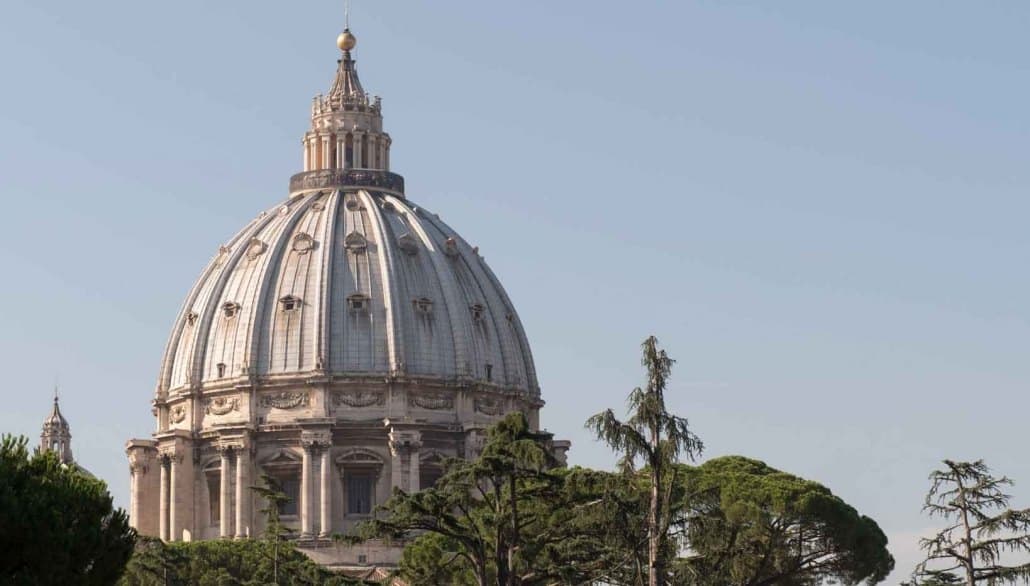 In 1534, Pope Clement VII commissioned Michelangelo to return to the Sistine Chapel and paint the altar wall. From 1534 to 1541, Michelangelo laboured over “The Last Judgment”, portraying the moment of the Second Coming of Christ, in which Jesus is surrounded by a vortex of saints, martyrs, angels and demons. Upon its completion, Michelangelo was met with some disapproving critiques, as he had painted all of the figures nude. It was not until after his death, during the Reformation, that clothing was added.

During his final years in Rome, Michelangelo took on a wide array of architectural projects, the long list of which includes designs for the trapezoidal Piazza Campidoglio, the upper floor of Palazzo Farnese, the interior of the Church of Santa Maria degli Angeli e Martiri, and the Sforza Chapel in the Basilica of Santa Maria Maggiore. The shining diamond of all his architectural accomplishments, however, is the dome of St. Peter’s Basilica.

Michelangelo died on February 18, 1564 before the dome’s completion, but his legacy will live on forever. If you wish to see the tomb of Michelangelo, it is in Florence at the Basilica of Santa Croce.