The Best Jewish Food in Rome 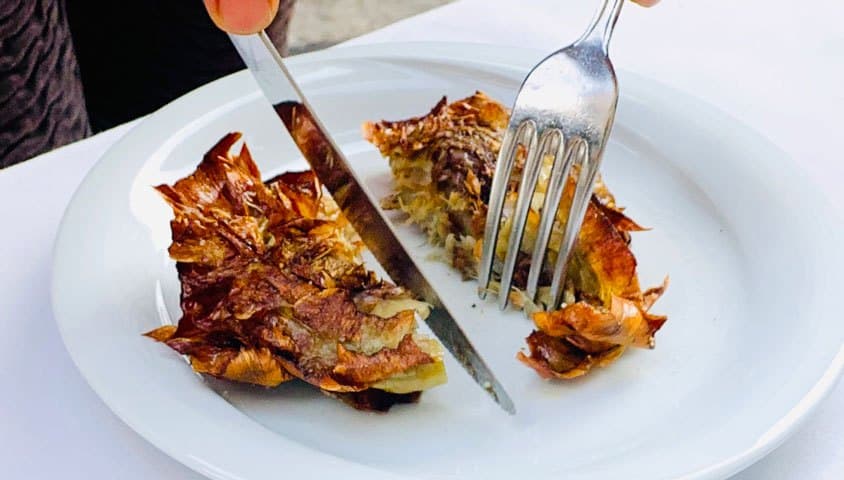 Rome’s Jewish Quarter is home to one of the oldest Jewish communities in western Europe and is well known for its inventive kosher cuisine. Despite having a past full of trials and tribulations, this resilient district has endured with an astoundingly proud and deeply-rooted culture. One thing that is for certain is that we all can enjoy the deliciously unique foods that have emerged from the Roman Jewish Ghetto!

The Vast History of the Jewish Ghetto 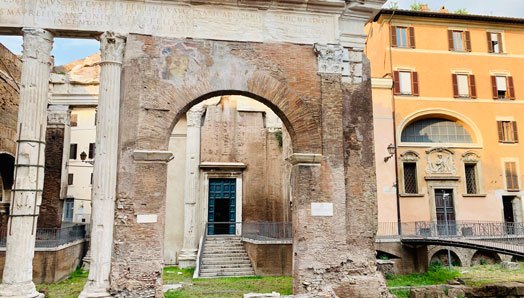 While today the picturesque streets make for a popular tourist attraction, it is important to remember the immense history that once took place in the Roman Jewish Ghetto. From the 16th to 19th century, the Jewish community in Rome lived with very restricted circumstances, few job opportunities, and a regulated curfew. To make matters worse, the Jewish population was limited to a locked and gated area which was prone to flooding.

In the midst of their struggles, families who lived here made use of the less sought after scraps of food and affordable ingredients like artichokes, zucchini, cod, and anchovies – all of which are key ingredients in their modern cuisine. 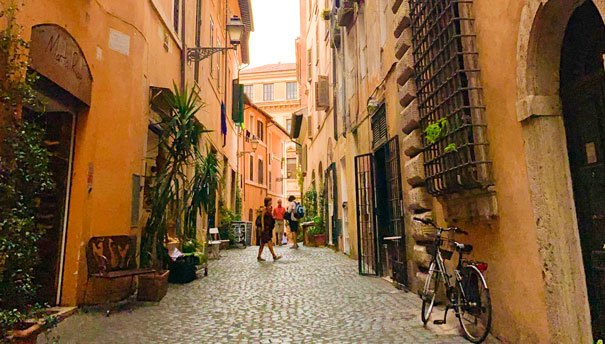 Most restaurants in the Jewish Ghetto offer options for a kosher diet!

As you stroll along the Via del Portico d’Ottavia, it’s easy to see why the district is known for its charming assortment of boutique shops, trendy bars, and kosher eateries. Before grabbing a table, check the menus. Following kosher tradition and dietary rules, dairy and meat are never served together. So, many restaurants either choose to serve one over the other, or they keep the products in separate kitchens and on separate menus.

If you are a foodie looking to make the most of your time in Rome, read on to learn about the most authentic and delicious dishes served in the Jewish Ghetto! 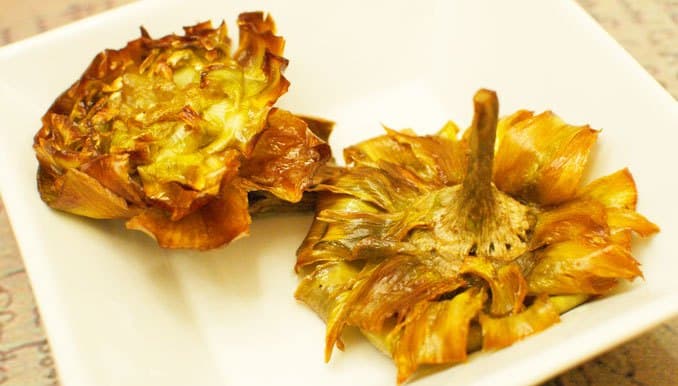 Jewish-Style artichokes are a must when visiting the Jewish Ghetto- just make sure to try them while they are in season! Photo by: Marco Iannantuoni

As you enter Rome’s Jewish Ghetto you will immediately notice the abundance of artichokes that are piled high in baskets outside of almost every restaurant. The Jewish-style artichokes are unique in that they are tenderized, peeled, boiled, flattened, opened, and deep fried before being topped off with a little bit of lemon juice and salt. The final result, which is savory and tender, makes for a tasty snack or side dish.

It’s recommended to order this iconic plate when the artichokes are in their prime season, which is typically sometime between February and April. This is easily one of the most famous dishes found in the Roman Jewish Ghetto, so if you are going to try one thing, make sure it is this! In fact, we love this dish so much that it is the first food you will try on our popular Tastes of Rome Food Tour. 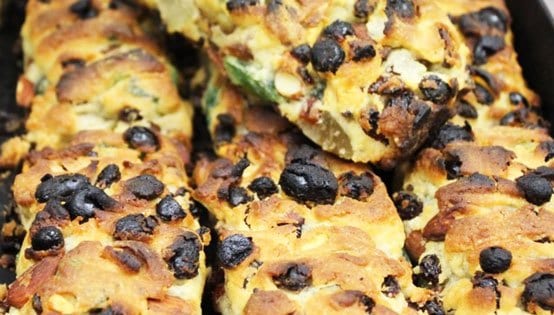 The Jewish community of Rome excels in all things culinary, but this is particularly true with desserts and pastries. Take the Pizza Ebraica, or “Pizza Dolce Ebraica,” for example. This dessert cake which dates all the way back to the 16th century, is a sweet bread typically filled with candied fruit peels, cherries, and nuts.

“Crostata” is another local Jewish-Style treat that will surely satisfy your sweet tooth! These tart-like pastries are filled with ricotta cheese and mouthwateringly cherries. One of the most popular dessert destinations in the quarter is Pasticceria Boccione, which has been selling sweets to the locals and visitors of the community for well over a century! Although it does not have a sign, you can locate it here. 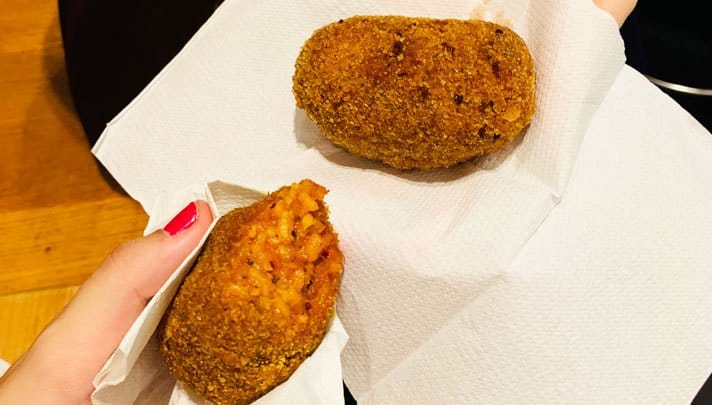 Looking for a savory snack to grab while walking through the cobblestone streets? Look no further than Supplí!

Did you know that Supplí, a traditionally Roman street food dish, actually has its roots in the Jewish Ghetto? These tasty balls are typically stuffed with rice, tomato sauce, and mozzarella. Afterwards, it is dipped in raw egg, rolled in bread crumbs, and then fried to produce an irresistible handheld snack. Throughout Rome, supplí are often made with cheese and meat, but as kosher restrictions are enforced in the Ghetto, you have to choose between one or the other. It’s a tough choice to make!

You Have to Try These Fried Zucchini Flowers (Fiori di Zucca) 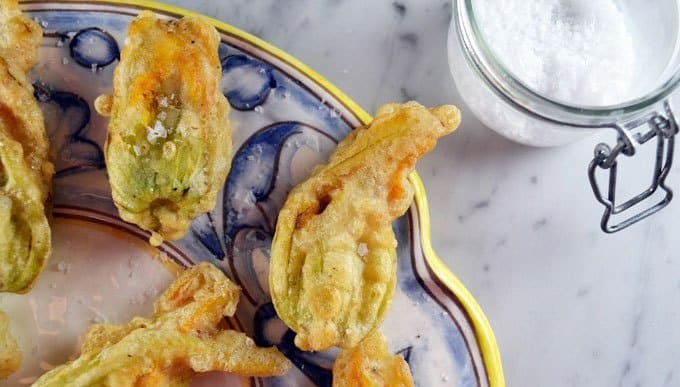 Within these fried flowers you’ll find a yummy surprise!

Another popular fried snack that was born in the Ghetto and later adopted by all of Rome is the Fiori di Zucca. Zucchini flowers are usually stuffed with mozzarella cheese or salted anchovies before being battered and fried. The result is light, crispy, salty, and delicious! Be warned however, because you can never have just one!

Baccala, dried cod which has been salted for preservation, is quite popular around Rome. The Jewish community, of course, has their own way of preparing it though. They traditionally soak the fish for 24 hours to remove salt before frying it. The final fried filets are tender and juicy! Keep in mind that while you may find various types of fish in the Jewish Ghetto, you won’t find shellfish, as it doesn’t fall into the traditional kosher diet. 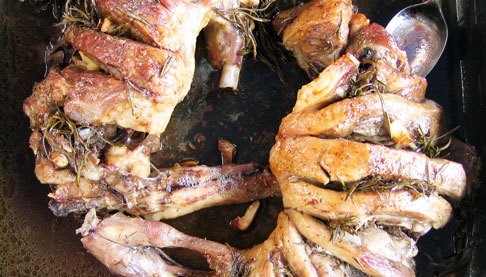 This traditional lamb dish has its roots in the Roman Jewish Ghetto!

Romans are big fans of keeping things simple, and this tradition has not been lost on the city’s Jewish population. This basic plate consists of lamb roasted with garlic, rosemary, and oil. That’s it. While some kitchens may add a few more ingredients to spice it up, this dish is flavorful enough as it is! Sometimes less really is more.

While the word “stracotto” itself literally translates to “overcooked,” the dish rarely matches the description. In fact, it always seems to be made just right! This steak is cooked in tomato paste and red wine before being served with a side of oven-baked potatoes. Occasionally, this meat is also used in a bolognese-like sauce to add a ton of delicious flavor to fettuccine pasta. 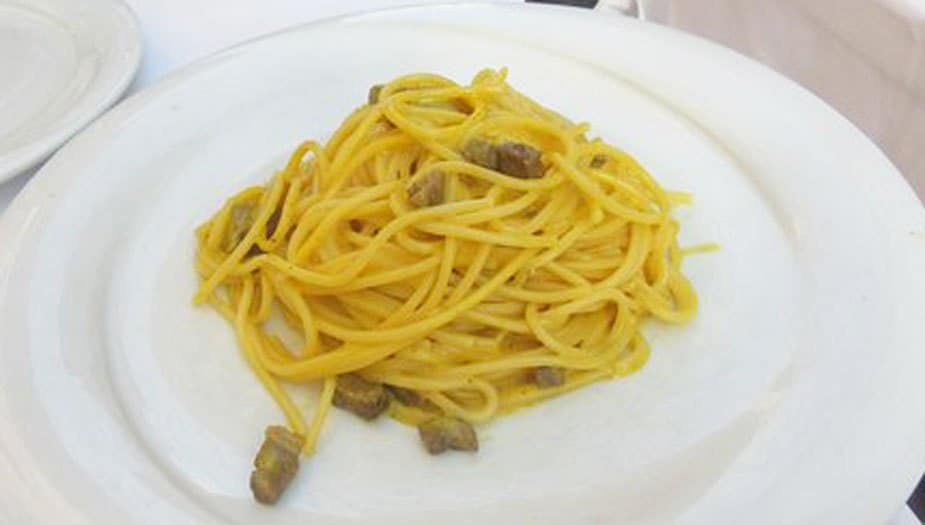 You know the Roman specialty Spaghetti alla Carbonara? The one that mixes eggs, cheese, and pork cheek into a savory pasta dish? Well, the Jewish Ghetto has its own kosher take on the classic. Instead of cheese, they use whipped egg yolks to achieve a rich, creamy texture and substitute the traditional guanciale (pork cheek) with a smoky beef. Yum!

Another kosher take on a Roman favorite is the Amatriciana alla Giudia. While the rest of the city preps their Amatriciana sauce with pig cheek, culinary experts in the Jewish Ghetto opt for salted beef with ripe tomatoes and roman pecorino cheese. Sounds scrumptious, don’t you think?

The Perfect Summer Side Dish- Concia! 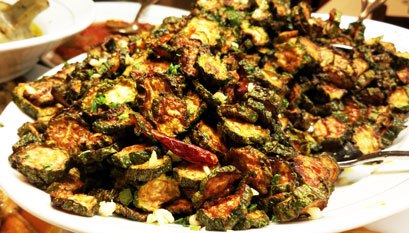 You won’t want to miss out on trying this tasty side dish!

Unlike many other Jewish plates, Concia is not served warm or hot. This unique snack, typically served as a starter or side dish, consists of a unique blend of zucchini. After being fried, the zucchini pieces are left to marinate in white wine, vinegar, and mint. Once the mixture cools and all of the flavor is absorbed after about a day, this refreshing plate is ready to be served. It is recommended to try this dish during summer when Roman zucchini are the freshest!

Where To Eat in the Jewish Ghetto 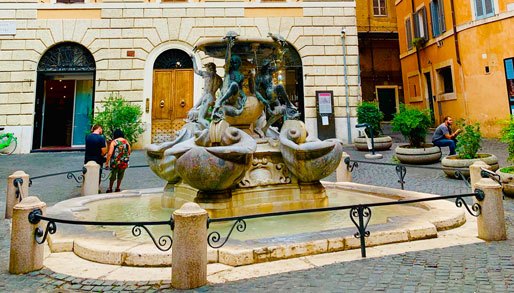 Don’t know where to eat in the Jewish Ghetto? Check out our recommendations below!

I bet you are wondering how and where you can try all of these delectable dishes, aren’t you? With many well reviewed restaurants, cafés, and bakeries surrounding the Jewish Ghetto, it can be difficult to choose. A few of our favorites places include Nonna Betta, La Taverna del Ghetto, and Sughetto– if you are looking to have a longer sit-down meal that is.

See the Jewish Ghetto & More of Italy on a Tour With Us!

There is no better way to get to know a city than by eating your way through it! On our Tastes of Rome food Tour, your culinary exploration will begin in the heart of the Jewish Ghetto where you will try out the traditional cuisine with a local guide. The tour will then take you around the historic center of the city as you stop at authentic eateries to try a wide variety of typical Roman dishes and beverages. By the end of the evening, you’ll leave feeling like you have experienced a true taste of Rome!