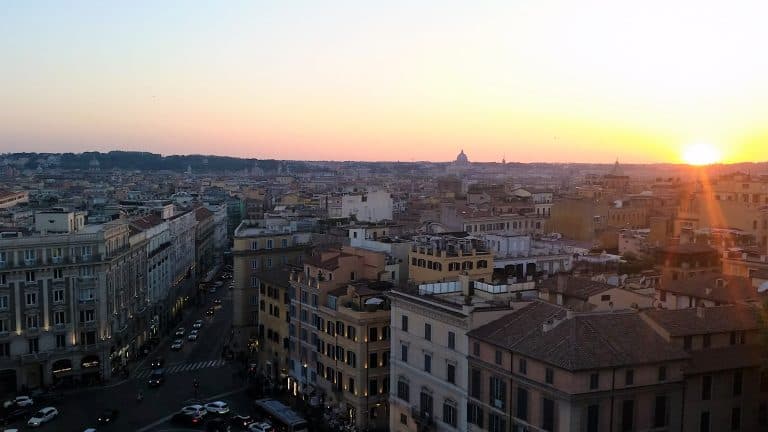 Summer is in the air and what better time to head outside and enjoy Rome’s beautiful vistas! With world-renowned restaurants, Michelin-starred aperitivo and cocktail shakers abounding, the Eternal City is home to some of the coolest terraces in the world. Do as the most fashionable Romans do and head to the skies for these chic locales.

One of the most beautiful terraces in the city, Les Etoiles began a new ‘all day’ format in April this year and is now open from 8am to 1am. This means there’s no excuse to miss this incredible place! From shrimp tempura and angus beef to 200-person weddings and everything in between, Les Etoiles offers it all in a place so elegant it looks as though it should be a movie scene. The charming hotel was built in the 1960s and is now in its 50th year of management by the Mencucci family of Rome. Head there in the evening to enjoy a cool breeze overlooking Castel Sant-Angelo and the forested hills of Gianicolo and Villa Borghese. The most charming terrace you ever did see. 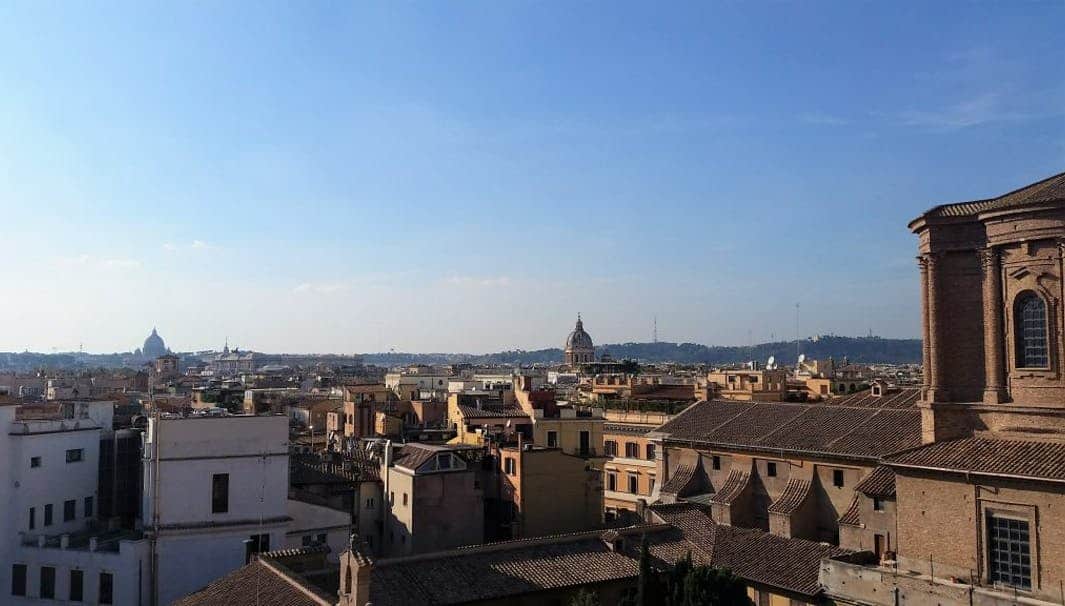 Soaking up the rays at Rinascente

It’s all too easy to relax on the comfortable couches at the newly constructed Rinascente terrace on Via del Tritone and gaze over Rome’s terracotta rooftops. Follow the staircase up from the Rinascente food hall to find views of the Supreme Courts and Trinitá dei Monti (the church towering over Rome’s Spanish Steps). Open from your morning coffee through to 11pm, it is a great spot to soak up the sun from dawn to dusk.

Once you’ve finished with the view, head downstairs from the couches to the Up-Sunset Bar by Michelin-starred chef Riccardo Di Giacinto. If you’re after a gourmet experience in a relaxed setting, then this is the place. Think contemporary patisserie delights and modern Mediterranean tapas to tempt your tastebuds. 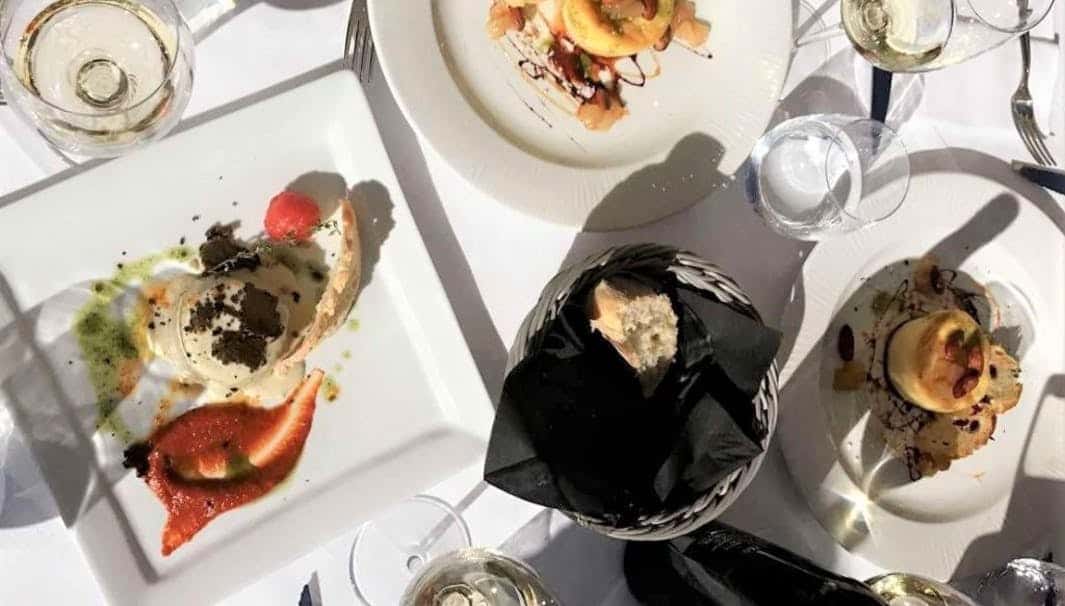 Enjoying the food from the rooftops of Rome

The American Bar is for that extra special celebration to share with your nearest and dearest – or a quiet romantic date. It yields an old school charm, if not a little touristy as the name suggests, and is as close to the Roman Forum as you could be on a rooftop in Rome. Watch the sunset behind the Capitoline Hill and the Vittorio Emanuele Monument while lingering over a cocktail in the open air – pure bliss. Both the public and the hotel’s guests can enjoy the bar from 5pm until late every night from March to October.

Beautiful views, espresso martinis and funky interiors with a lively atmosphere? This one has it all! Toy Roof is a new-comer to the Rome rooftop scene, having only opened last summer. It is located on Via Nazionale by Termini station above Sofitel’s 5 star La Griffe Hotel (not to be mistaken for Sofitel’s equally gorgeous Villa Borghese terrace). The lounge is open for aperitivo and dinner from 6pm to 2am in the summer and features graphics from local Roman artists projected onto nearby roofs. There’s a happening vibe here, transferred across from Sofitel’s successful sibling bars in London, Dubai, Los Angeles and Mykonos. It has likewise won over the crowds in Rome so expect it to be the hot pick this summer!

If you’re after something more casual and completely private, head to Hotel Cecil. This lesser known terrace on Via Francesco Crispi is generally only known to hotel guests so most nights you’ll have the whole terrace to yourself! It is full of Roman charm and perfect for a sunset Aperol Spritz after a long day. 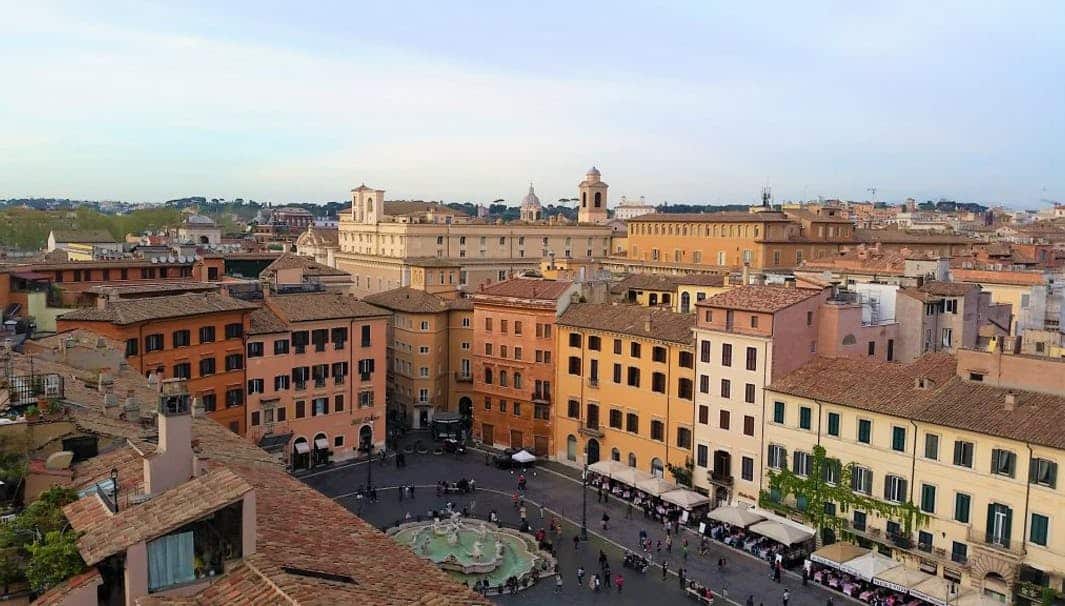 Spectacular is the only way to describe the views from this famous terrace. Overlooking Piazza Navona, and next door to the cosy restaurant featured in Eat Pray Love, Terrazza Borromini is an elegant place to see and be seen. Expect pricier wines here with a 360-degree view extending over ‘La Grande Bellezza’ (the great beauty) of St Peter’s Dome and the roof of the Pantheon set between the magnificent bell tower and dome of Sant’Agnese Church. As if that wasn’t enough, cosy table settings are candlelit at sunset for the perfect romantic evening. 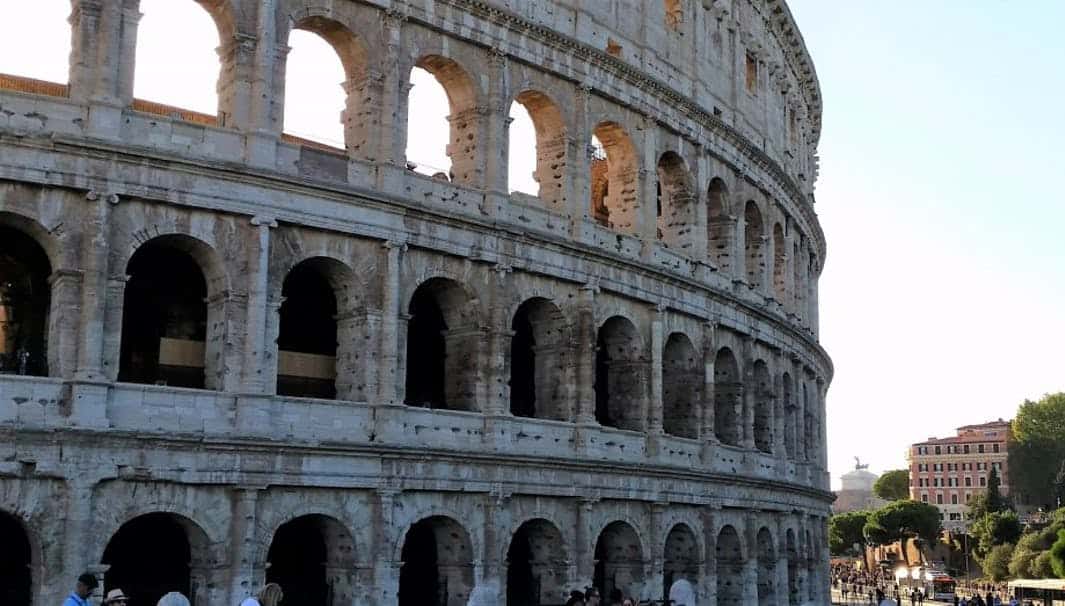 The Colosseum from the Aroma Restaurant

No trip to Rome would be complete without a visit to the iconic Colosseum, and Aroma is bound to give you more than you bargained for with the chance to gaze uninterrupted at the ancient structure. Rest your weary sightseeing legs at the luxurious Michelin starred restaurant from Roman Chef di Lorio. At only 28 seats, this is one of the most exclusive restaurants in Rome and offers an intimate contrast to the grandeur of the Colosseum and Roman Forum beyond. 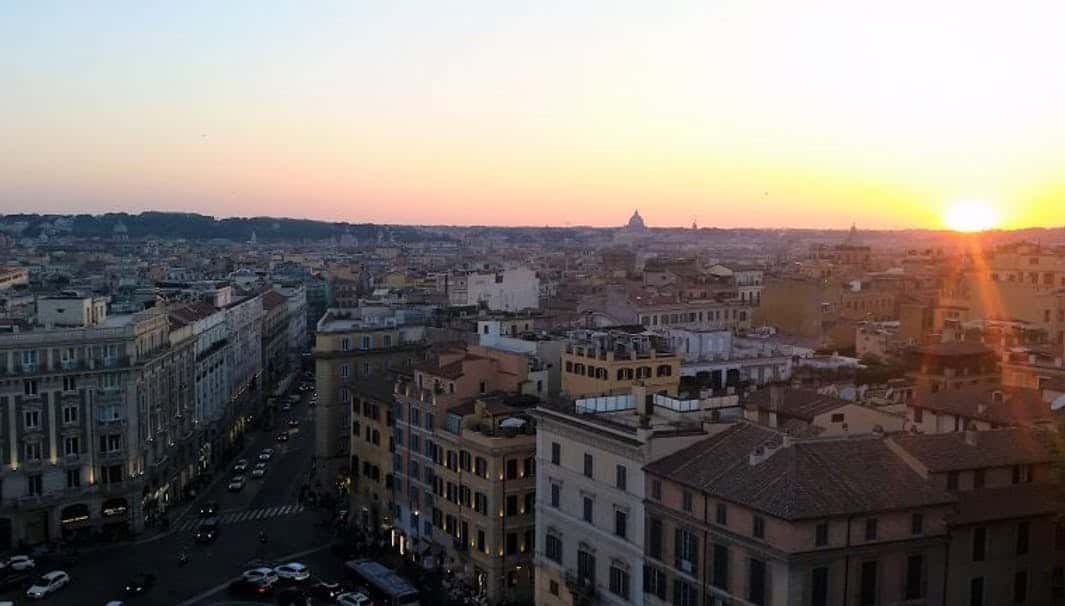 If you thought we were saving the best to last, you’d be right! Serving the freshest ingredients assembled with the highest finesse by the famous Andrea Fusco, the Bernini terrace is the crème de la crème of Rome. Here you’ll find a bar, bistro and (beautifully decorated) Michelin-starred restaurant all with magnificent views from the top of Piazza Barberini. Join the elegant clientele and allow the gastronomic experience and sights and sounds of the Eternal City to overcome your senses.

These are but a few of the best terraces in Rome! For more suggestions, contact What a Life Tours for itineraries and include a rooftop terrace at the end of a day exploring the Pantheon! Let us know your favourites!