All Roads Lead to Rome

Via Appia Antica (The Appian Way) is one of the oldest roads in Rome and was the most important road in the Roman Empire. In its prime it stretched nearly 600 km from the centre of Rome all the way to Brindisi, in the south-east of Italy. Today, what’s left of the road is a regional park which contains not only an impressive cobblestoned road, but stunning natural and archaeological surroundings.

Construction on the first section of the road began in 312 BC and it was completed in 190 BC. Built to withstand the ravages of time, Appia Antica was constructed using clever Roman methods and materials. First the dirt road was leveled and small stones and mortar were placed on top. Gravel was added, and finally tight, interlocking stones created a flat surface. Perhaps the modern Romans could learn a thing or two about road construction from their ancestors!

Appia Antica is named for Appius Claudius Caecus who laid the first 90 km of road and was responsible for not only overseeing the project, but for masterminding the whole idea. Caecus began his political career as a Censor (a government official). Aside from Appia Antica, Caecus also ordered the construction of the first Roman aqueduct, Aqua Appia, and therefore secured Rome’s water supply! 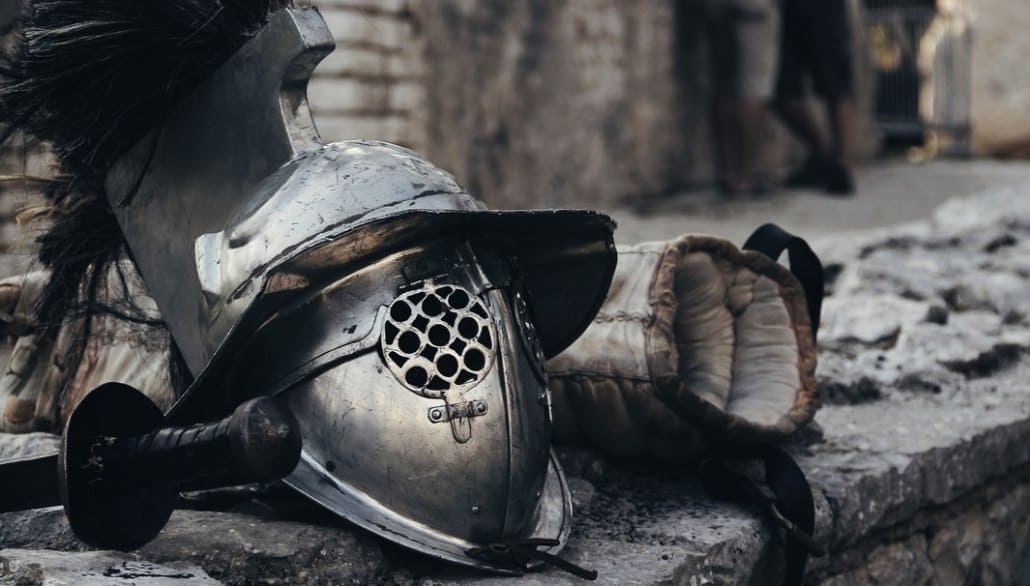 When the construction of Appia Antica begun, the Romans were at war against the Samnites, an ancient people who lived in south-central Italy. Before Appia Antica, there were very few roads that led outside the city, which made it virtually impossible for the Romans to send troops and supplies to the battlefront. After they had Appia Antica, however, the tides turned in their favor and the Romans defeated the Samnites.

While Appia Antica was initially built as a military supply route, the road has been the battlefield for more than one important war, such as the slave revolt (The Third Servile War) led by the ex-gladiator, Spartacus in 73 BC. It began when around 70 slave-gladiators escaped from a gladiator school and over a period of two years they were joined by 120,000 others willing to fight for their cause. During this time small groups of rebels traveled all over Italy, raiding estates and towns. A group of 6,000, led by Spartacus himself, were captured in 71 BC when they found themselves on Appia Antica pinned between two armies. The Romans brutally crucified every one of the rebels along a 200 km stretch of Appia Antica from Rome to Capua. 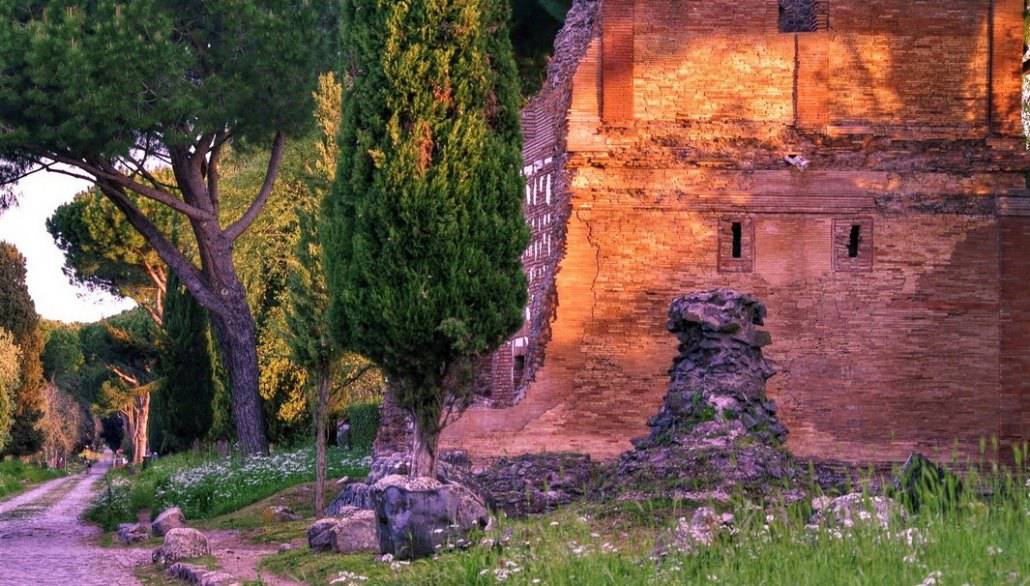 There are many interesting things to see along Appia Antica and even though the road doesn’t stretch all the way to Brindisi anymore, there is still a huge stretch of road left! Today, Appia Antica starts just 2 km south of the Colosseum and continues all the way to Ciampino. Bear in mind that trying to tackle all of Parco Regionale dell’Appia Antica in one day is a huge undertaking, so we’ve broken it down into the most important sights (in geographical order). 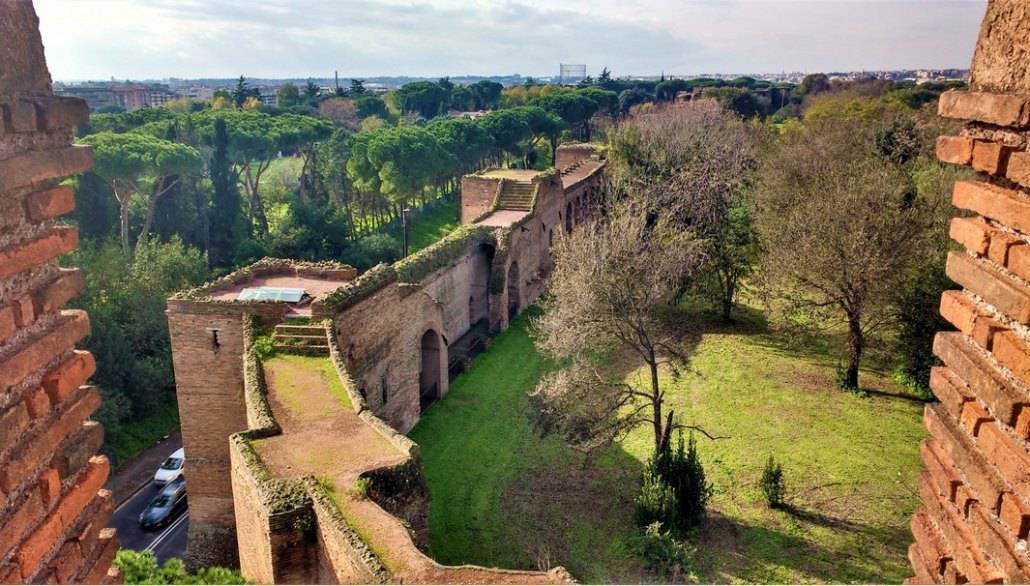 View from the top of Porta San Sebastiano, looking along the Aurelian Wall

Porta San Sebastiano is the largest and best preserved gate in the Aurelian Walls. It was originally known as Porta Appia and now acts as the gateway to Appia Antica! It is also home to the free Aurelian Walls Museum. You can learn about these amazing Roman fortifications, as well as walk along part of the impressive wall itself.

Bus 118 from the Colosseum to Porta S. Sebastiano

The Church of Domine Quo Vadis 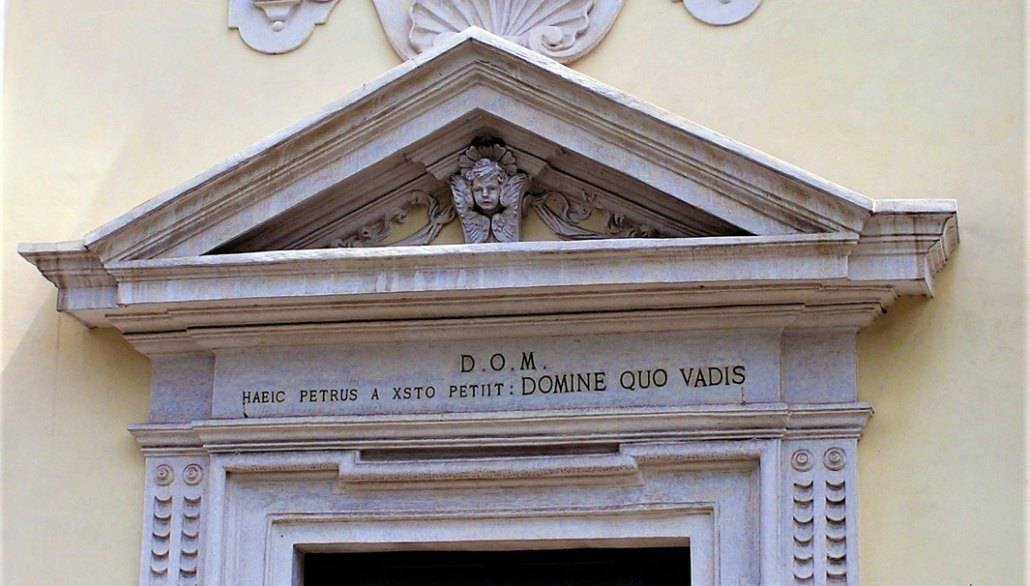 This 17th century church stands on sacred land. According to the Christian religion, this is the spot where Peter saw a vision of Jesus while he was fleeing Nero in 64 AD. Peter asked Jesus, Domine, quo vadis? (Lord, where are you going?), and Jesus answered that he was going to Rome to be crucified again. This apparition is said to be what prompted Peter to return to Rome and become a martyr. Inside the church you can see a marble slab with the supposed footprints of Christ. This is just a copy, the original is in the nearby Basilica of San Sebastiano. You can also admire frescoes of both Peter and Jesus.

Bus 118 from the Colosseum to Appia Antica/Domine Quo Vadis

The Catacombs of Callixtus 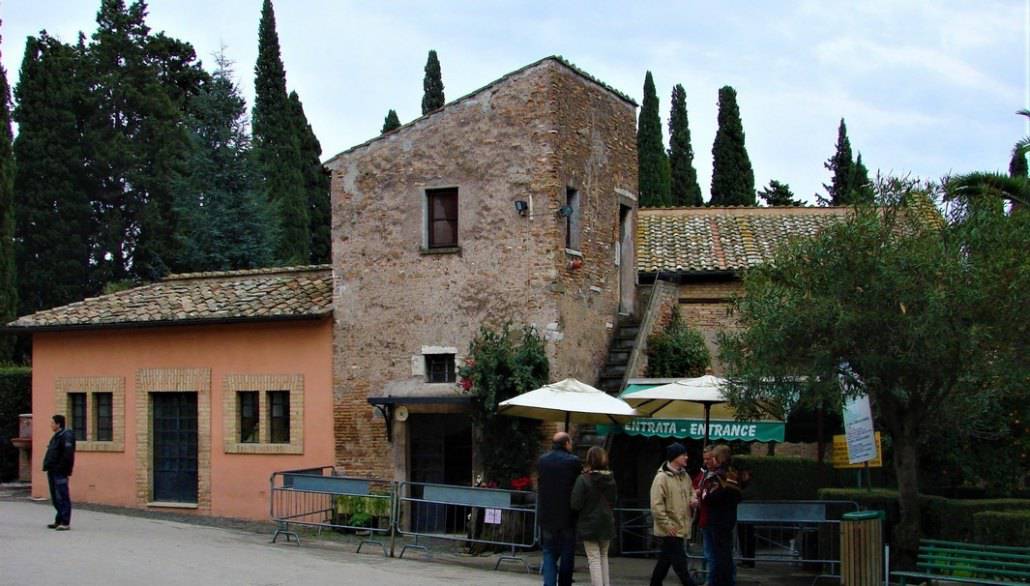 The entrance to the Catacombs of Callixtus. https://www.flickr.com/photos/wm_archiv/2697221006

These large Christian Catacombs once formed part of a huge ancient funerary complex that spanned over 300 km. It was only in the second century that Christians began to bury their dead underground, and at the time it was not only a cemetery but a place of worship. This particular catacomb is famous for the Crypt of the Popes, which once contained the remains of several popes from the 2nd to 4th centuries.

Bus 118 from the Colosseum to Catacombe S.callisto

The Catacombs of St. Sebastian/The Basilica of San Sebastian 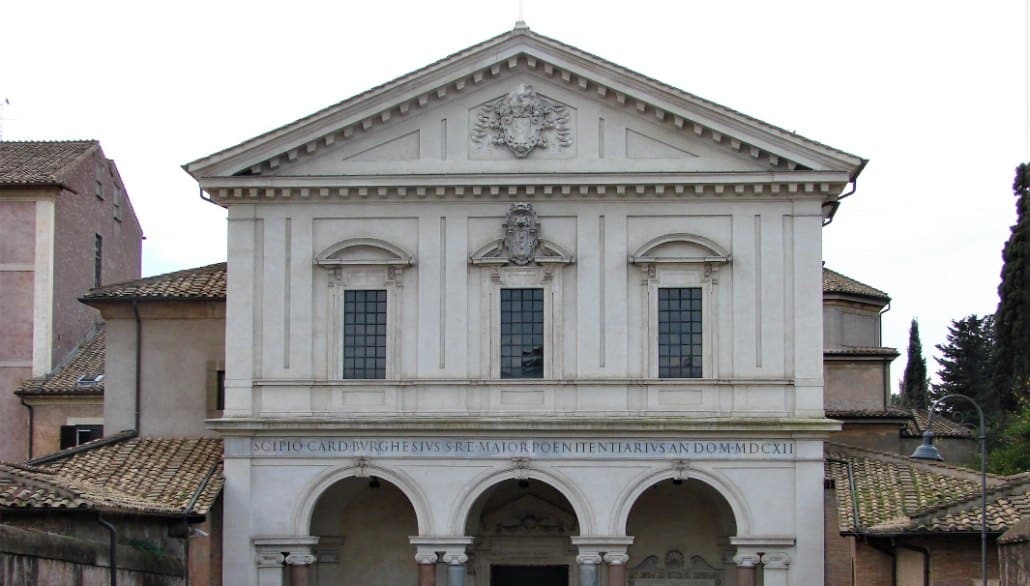 This complex is named for Saint Sebastian, who was buried at the site in 350 AD. His martyred remains lie below in the catacombs and the Basilica (erected in the 4th century) contains the arrow that killed the saint. These catacombs were the first necropolis to be called ‘catacombs’. This is because the burial area was near some excavated mines and a sign was erected in Latin ‘ad catacumbas’ (near the hollows) and thus the name Catacomb was born. Perhaps their biggest claim to fame is that they once held the remains of the Apostles Peter and Paul.

Bus 118 from the Colosseum to Basilica S. Sebastiano 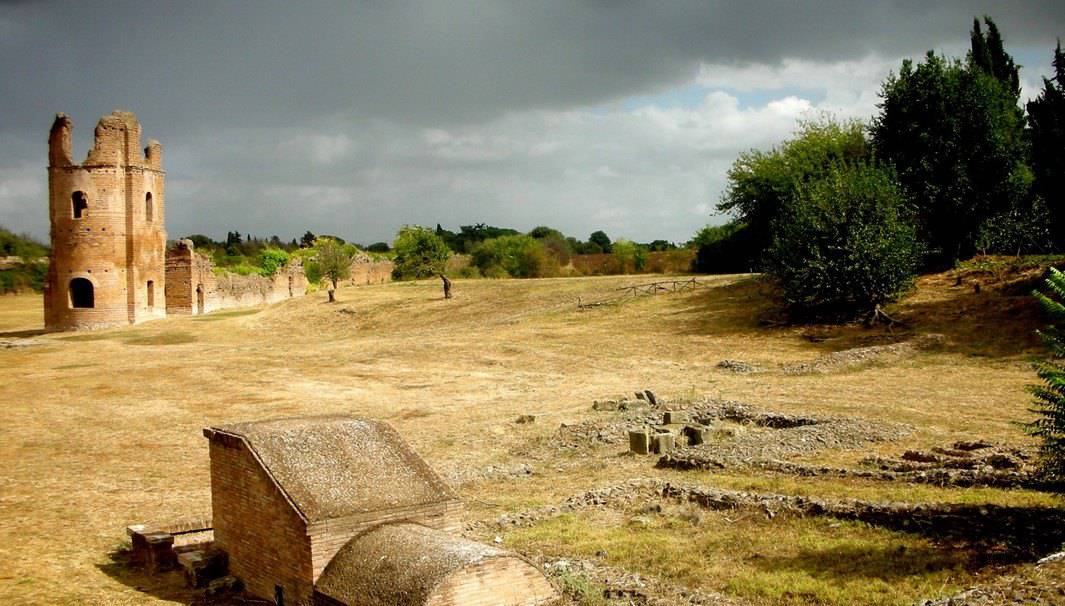 The ruins of Circus Maxentius were once part of a large complex of buildings erected by Emperor Maxentius in 306 AD on Appia Antica. The circus itself is second in size to Circus Maximus but is better preserved. This could be because it actually held very few events; those recorded here were inaugural funeral ceremonies. The ceremonies would have probably honored Valerius Romulus, the son of Maxentius, who died at a young age in 309 AD. The emperor died shortly after in 312 AD and the circus was probably never used again.

Bus 118 from the Colosseum to Basilica S. Sebastiano

The Mausoleum of Cecilia Metella 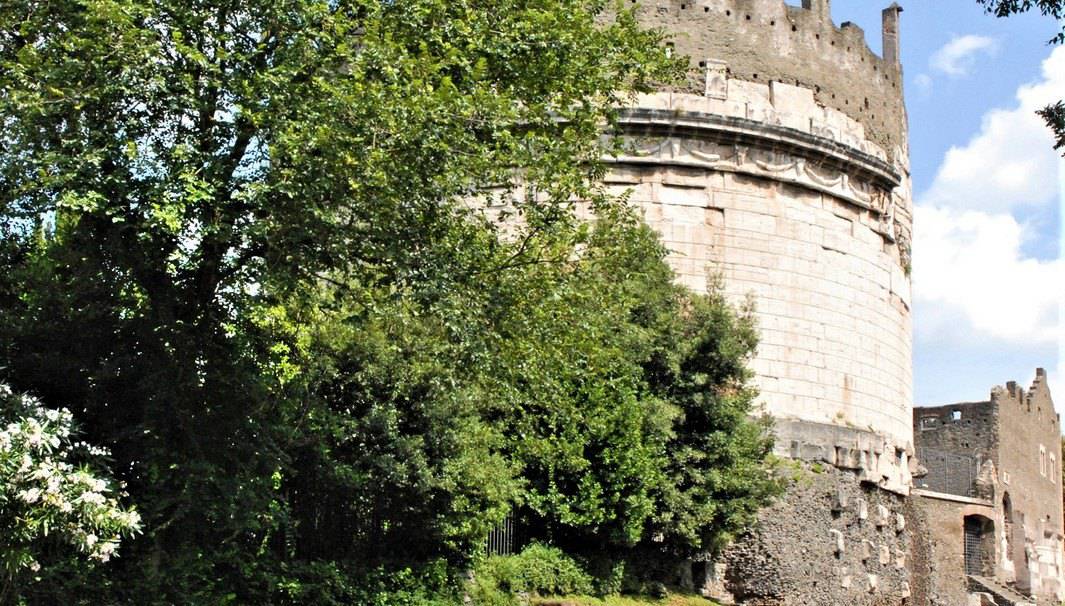 This impressively preserved cylindrical shaped tomb was built during the 1st century to honor noblewoman, Cecilia Metella who had some important relatives. Her father was a Roman Consul, and her father in law was Rome’s wealthiest man and served under Julius Caesar! The outside of the tomb is decorated with a marble frieze (some of which remains today), which shows the wealth and power of her family.

Bus 118 from the Colosseum to Basilica S. Sebastiano + 5 minute walk 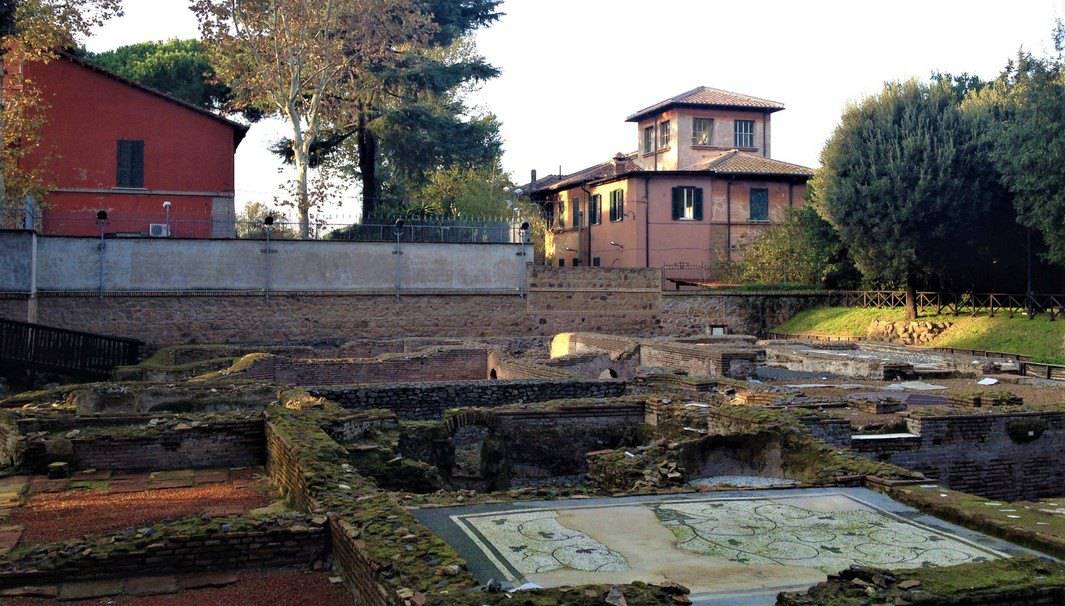 This is a small archaeological site containing the ruins of thermal baths and a villa turned museum. The name dates back to the Medieval times when the surrounding area was known as Casale di Capo di Bove e di Capo di Vacca (Hamlet of the Heads of the Ox and Cow). The baths date back to the 2nd century and showcase some beautiful mosaics, and the villa exhibits photographs of Appia Antica from the early 20th century. 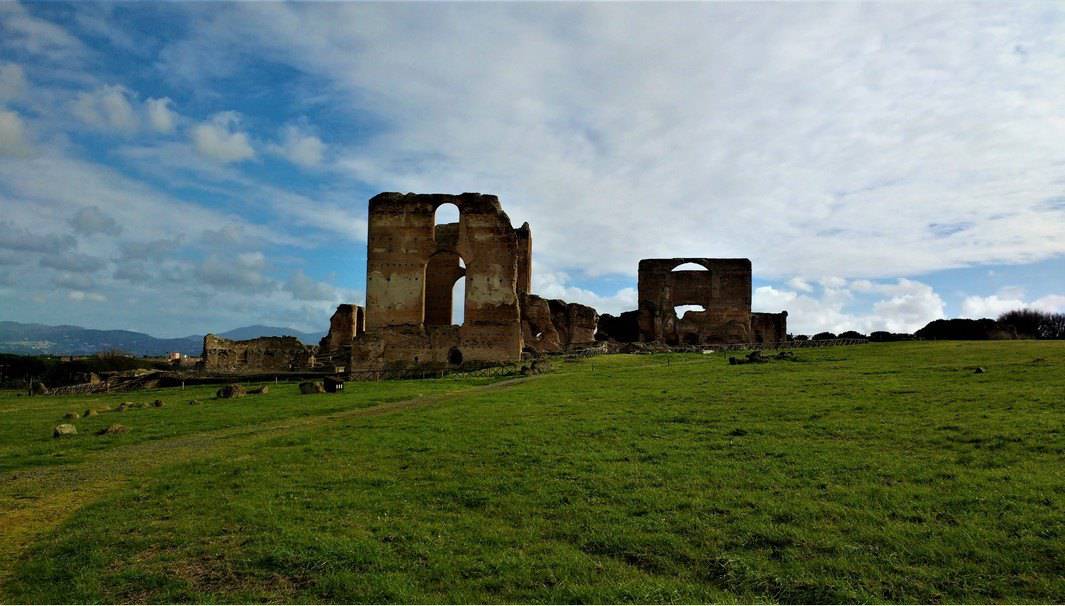 €5 (combined ticket with The Mausoleum of Cecilia Metella)

This ancient Roman Villa complex was built by the wealthy Roman Consuls and brothers, Sextus Quintilius Valerius Maximus and Sextus Quintilius Condianus and dates back to around 150 AD. When the ruins were discovered they were named Roma Vecchia (Old Rome) as the size of the complex was so large it was initially thought to be a village. Today there is also a museum on site which contains the marble friezes and sculptures that once decorated the villa. You can also visit the ruins of the villa as well as a nympheum (a temple) and a tepidarium (bath complex) while admiring the view of the distant Roman hills.

The Mausoleum of Pompey Magnus 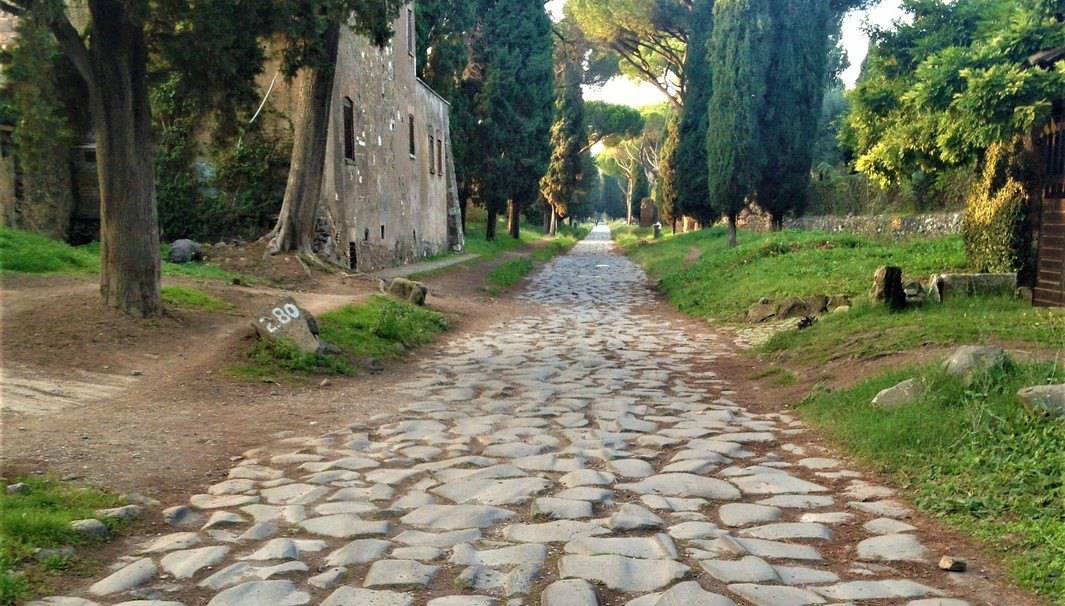 Appia Antica heading towards the mausoleum of Pompey Magnus

This small archaeological site boasts a grandiose funerary monument dedicated to Gnaeus Pompeius Magnus (Pompey the Great), a Roman military and political leader. Aside from his many military triumphs, Pompey was married to Julius Caesar’s daughter, Julia. However, after Julia died, Pompey turned against his father in law and fought Caesar for the leadership of Rome, leading to a civil war! Eventually Pompey was defeated and fled to Egypt, where he was assassinated.

While these are the largest sites along Appia Antica, you’ll find many more archaeological ruins, asd well as gorgeous landscapes and modern villas along the way.

Please note that the stretch of road from Porta San Sebastiano to The Mausoleum of Cecilia Metella is still a working road so beware of traffic, while the portion from Capo di Bove to the mausoleum of Pompey Magnus is pedestrian (with a few permitted vehicles only). 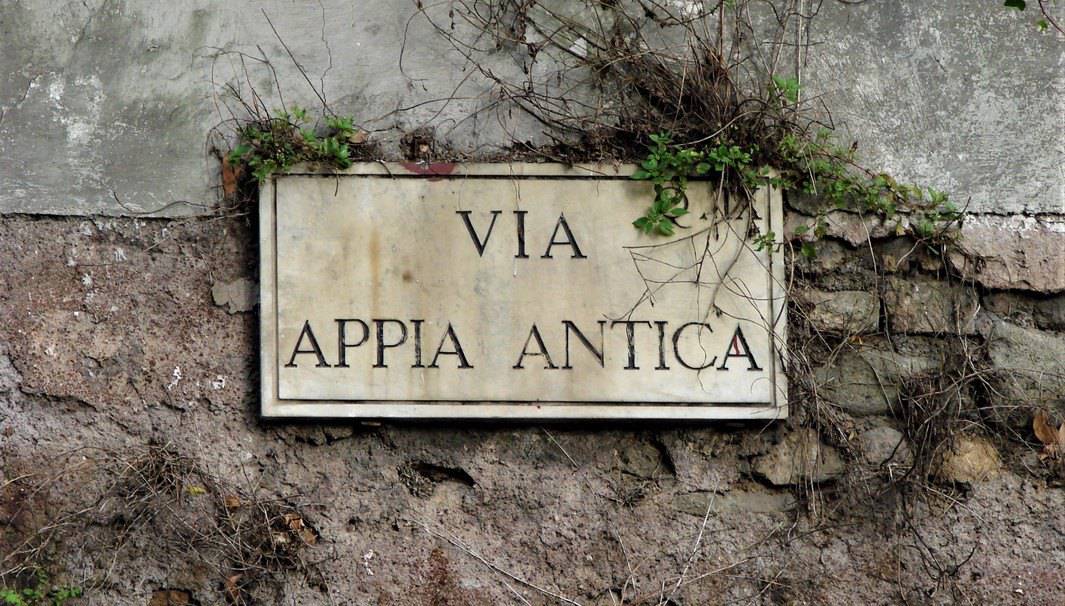 For more information or to arrange a private tour of Appia Antica, please contact us at What a Life Tours!