Home > Blog > 7 Facts About the Colosseum

7 Facts About the Colosseum 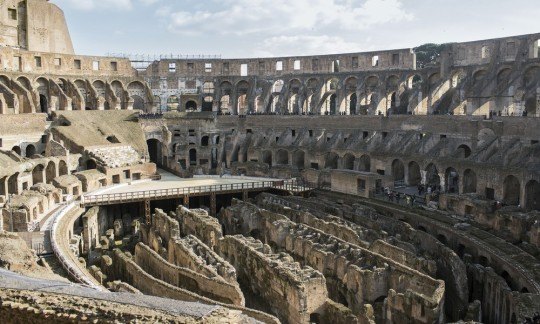 The Colosseum is the symbol of the Eternal City, one of the most renowned monuments in the world as well as being one of the world’s Seven Wonders. The Flavian amphitheatre represents an amazing historical and archaeological treasure which, still today, is a constant reminder of the greatness of the Roman Empire. Here are 7 curious facts about the Colosseum.

Following the work which lasted almost three years, the Colosseum was inaugurated in 80 A.D. with a series of events and shows that lasted for one hundred days. Gladiatorial combats, symbol of this ancient arena, only ceased in 404 when a monk named Almacchio lost his life during the protest demonstrations, which during Constantine’s Empire became frequent in the city.

For a certain period of time in history, the Flavian Amphitheatre was abandoned to its fate and because of this, it was used as a primary source of raw materials. Some of its marble was in fact used in many Roman constructions, such as Saint Peter’s Basilica and the Barberini Palace. For this reason, besides the terrible earthquake which destroyed it in 851, the Colosseum became an archaeological site which was very different from how it presented itself originally and it must be noted that some historians believe at least one third of it is missing.

Inside the Colosseum, amid its remains, some species of plants of various origin can be found. Some botanic experts have succeeded in classifying 684 plants, some of which seem to have exotic origin thanks to the presence of microclimates inside the amphitheater; but with the passing of time, the number of plants present diminished drastically to 242.

The Colosseum is certainly a dream place for artists aspiring to a unique performance in a location of such cultural relevance; few though are those who succeed in this extraordinary enterprise. The first Italian artist to perform at the Flavian Amphitheater in 2011 was Biagio Antonacci, Andrea Bocelli and Nicola Piovani followed in his footsteps. Artists of International renown who had the opportunity to sing surrounded by these historical arches are: Ray Charles,  Elton John, Paul McCartney, Noa, Mercedes Sosa and Khaled.

The Colosseum has been chosen to support Awareness Campaigns on the Death penalty and for over 15 years it has been their protagonist with a very special illumination. It changes every time someone is saved from the death penalty somewhere in the world; in that moment the Colosseum can be admired while changing color from golden to white.

From a yearly survey carried out by the Ministry of Cultural Heritage, during the past few years, the Flavian Amphitheater has ranked first in the chart of the most visited monuments in Italy, with an average of five million visitors.  Pompeii, the Uffizi gallery in Florence and the Accademia Galleries are next on the list. Another Roman monument ranking among the first positions in the chart is Castel Sant’Angelo, followed by the Egyptian Museum in Turin.

At the times of Gladiators, the Colosseum was known as the seventh door to access Hell, this reputation was connected to the fact that many were those who died during the games which were held inside it. Many legends narrate that the Flavian Amphitheater was used as a place for sacrificial rites during which the blood of killed gladiators was used, and these were not isolated cases. Even during Medieval times, it is said that some bandits used this place to bury their victims and that some magicians would use herbs collected inside the Colosseum for their potions.

To find out more about the Colosseum, check out our Colosseum Tours. What a Life Tours have provided extraordinary guided tours of Rome since 2009. They are the number 1 rated Vatican Tours agency on Trip Advisor since 2011 and were recently awarded ‘Historical Tour of the Year 2016’  by the prestigious travel journal Luxury Travel Guide for their Colosseum Private tour. Find out more about their award-winning Rome tours.